“If you can meet with triumph and disaster
And treat those two strangers just the same.”

We reckon the Nexus 5X would understand the sentiment that underlies those famous lines from Rudyard Kipling. Seldom has opinion about a phone swung so radically in a matter of weeks. Launched as the spiritual successor of the very successful Nexus 5, it was greeted at its launch with shock and disbelief at its price – Rs 31,900 – which many (us included, check our first impressions) considered a tad on the high side for a device that was not exactly a spec barnstormer. Criticised initially for a plasticky build (especially when compared with the metallic Nexus 6P) and for being overpriced for its design and specsheet (the Moto X Play and the OnePlus 2 were just two of the worthies that more than matched it), it has suddenly come back into favor thanks to significant price cuts that have put its price in the vicinity of Rs 24,000. No, these are not official price cuts – the device is still listed as “Rs 31,900 onwards” on Google Play – but there’s no doubting that they have brought the device back into the “value for money” equation. Reaction to the price reduction has been mixed – some have claimed it makes the phone the best in its (new) price category, while others sniff that it reflects the fact that the device had no takers. So where exactly does the Nexus 5X stand?

Not quite the looker

Let’s get this out of the way – the 5X is not a device that we would advise entering in a Phone Beauty contest. Its design is more functional than stylish. And yes, while it does appear compact, the fact is that it does so mainly in comparison to the much larger 6P, and is actually not what you would call a super compact device like the Nexus 5 was. The Nexus 5 had made us wonder if it actually featured a 4.95 inch display because it came in a frame that was a mere 137.9 mm long – just for context, that is actually shorter even than the iPhone 6s, which sports a smaller 4.7 inch display but is 138.3 mm long. The Nexus 5X now is 147 mm long although at 7.9 mm thin, it is slimmer than the 8.6 mm thin Nexus 5, if not quite in iPhone territory (7.1 mm for the 6s). 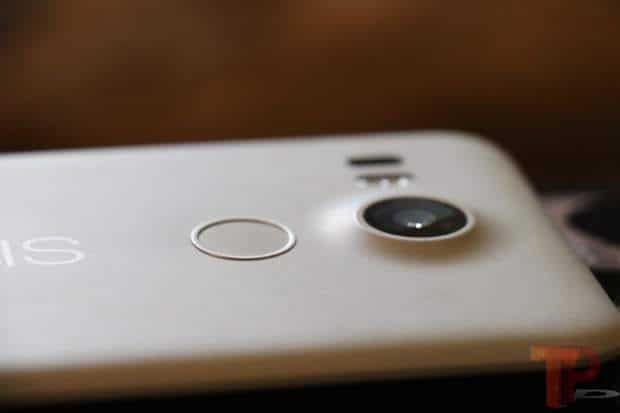 Although much has been made of its all plastic build not being as premium as that of the metallic 6P, we think that the quality of plastic used is better than what we had seen in the Nexus 5 and even the 6. That said, it is not exactly a traffic stopper – the camera sticks out at the back and the front is right out of the basic Motorola book of design, with speakers flanking the 5.2 inch display (thankfully, the speakers are not as sharply recessed as those on the Nexus 6P, which are deep enough for dust collection). The volume rocker and power buttons are on the right and are rather disappointingly made of plastic. The back cannot come off (the SIM card slot is on the left) but the phone does look look as if it is made of two pieces. No, there is no two ways about it – of the three Nexus devices made by LG, this is easily the least appealing in visual terms.

What it lacks in looks, however, the Nexus 5X does make up for on the spec sheet. The 5.2 inch display is a full HD one and its 423 ppi pixel density is very respectable indeed. Some would point to the 445 ppi on the Nexus 5, not to mention 518 ppi on the 6P, but truth be told, most viewers would be hard pressed to distinguish between the three in terms of viewing content. It comes with Gorilla Glass 3, rather than 4 as seen on the Nexus 6P, but once again, we do not consider this a deal breaker. 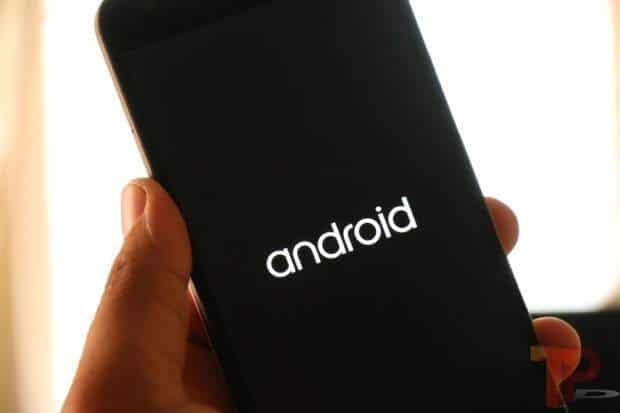 Powering the device is a Snapdragon 808 processor (similar to the one in the very impressive LG G4) with – rather surprisingly – 2 GB RAM. The RAM has been one of the major complaints people have had about the 5X and even the price cuts have not silenced it – yes, we have seen devices with 2 GB RAM run smoothly (the Nexus 5 is a prime example) but at a time when most flagships are coming with 3-4 GB of RAM, 2 GB seems a tad on the lesser side. Storage stands at 16 GB or 32 GB depending on the model you take, but is non-expandable. The device comes stacked with connectivity options (4G, NFC, Wi-Fi, Bluetooth) as well as sensors (gyroscope, proximity, compass, accelerometer, barometer) but what is really going to mark it out are the features on the back – the 12.3 megapixel camera which is said to be identical to the much acclaimed one on the Nexus 6P, and the fingerprint scanner below it. While on the camera front, the Nexus 5X also has a 5.0-megapixel front-facing camera – good enough for selfies, although we can see some complaining that it is a step down from the 8.0-megapixel one on the 6P. The battery at 2700 mAh also seems a bit on the smaller for a large device – 3000 mAh and above seems to have become a rule of sorts at these screen and price points.

All said and done, the 5X ticks most boxes, barring the RAM and expandable memory, for its reduced price tag. Of course, there are those who would say that the pure, unfettered Android (Marshmallow 6.0 out of the box) running on it with assured updates to newer versions will compensate.

And for the most part, a very good performer!

And it is actually the pure Android that is the device’s strongest suite. We rarely had any speed problems with the Nexus 5X, although we did see lags creep in when playing some high-definition games, and even sometimes when switching between apps. These were, however, relatively rare. This is not a device for benchmark lovers either – its scores are good, but nowhere near the top performers. 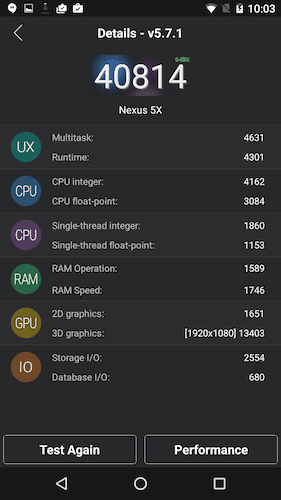 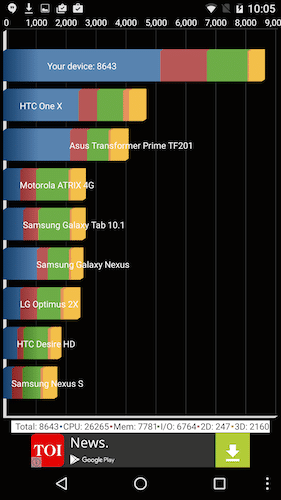 It does perform exceptionally in two areas though. The fingerprint scanner worked very smoothly – as well as on the 6P. And well, the same goes for the camera. No, we are not going to label it “best in class” as we still think the likes of the Galaxy S6 and iPhone 6S are far more consistent, but we have to concede that this is easily the best camera we have seen on a Nexus, or for that matter, any device, Nexus or Moto, running pure Android. Day time performance is well above average with good colors and generally decent detail (although there were lapses), but it is at night that the phone really shines, handling glare and low light with an elan that we have not seen in too many devices – handled well in low light, this device can give the iPhone 6s Plus and the Galaxy S6 Edge a run for their money. What more can we say?

Where the device does come up short, however, is in handling calls and battery. Although sound quality from the speakers while playing games and films was acceptable, we did have people asking us to speak more clearly frequently or accuse us of “speaking from a distance.” Battery life is an Achilles Heel – if you take a lot of pictures of really love gaming, getting through a day is going to be tough on the Nexus 5X. Be more careful and you could just about see through a day. It is definitely better than the Nexus 5 and Nexus 6, but is not in the “good” territory.

Worth it IF you love pure Android…and snapping!

With its reduced price, the Nexus 5X is a worthy successor to the Nexus 5. Unlike that worthy, however, it has much more to contend with. And like the Nexus 5 (which suffered in the sound, battery and camera departments), the Nexus 5X is a bit of a mixed bag. Yes, the design might seem ordinary and the materials might make it look like the bridesmaid of the 6P, but on the flip side, it does deliver generally smooth performance, a good camera and the latest Android with assured updates. It is definitely a massive step up in terms of performance and specs from the Nexus 5. On paper, that would justify the “best phone under Rs 25,000” tag that some have slapped on to it following its price reductions. 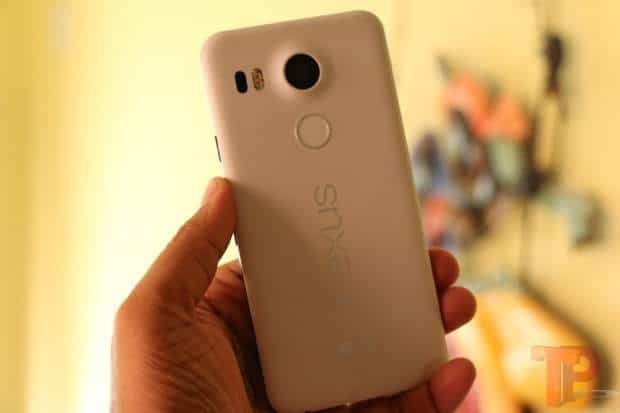 The problem is that while the 5X does perform well, it faces some very tough competition. Ironically, some of it comes from its own predecessor, the Nexus 6, which did not have as good a camera but throws more RAM and a quad HD 6.0-inch display into the mix. There is also the far-from-little matter of the OnePlus 2, which has its share of software bugs but more than matches the 5X’s spec sheet, thanks to its 64 GB storage, 4 GB RAM, dual SIM support, and bigger battery. And even as this is being written, Qiku has launched its Q Terra in India, featuring a larger 6.0-inch display, a dual 13 camera set up, a Snapdragon 808 processor with 3 GB RAM and 16 GB storage (with expandable memory) at a price point of Rs 21,990 (19,990 if you have an invite). And well, if it is a great camera that you seek, then Lenovo’s Vibe Shot sneaks into contention offering a very good shooter in a sleek form factor for about Rs 25,000. Round that off with Huawei’s beautifully designed Honor 7 which comes with comparable (some might say better) specs at Rs 22,990, and you can see why we are not too sure whether the Nexus 5X at its lower price is the killer deal many are claiming it is.

For while there is no doubt that the Nexus 5X’s reduced price makes it much more accessible and far better value for money than it initially was, the fact remains that it still has to contend with some very stiff competition. Yes, it does have the ‘pure Nexus’ edge that geeks love, but that edge too has been dulled by the likes of Motorola over the past year. The other features it brings to the table can be matched by the competition. 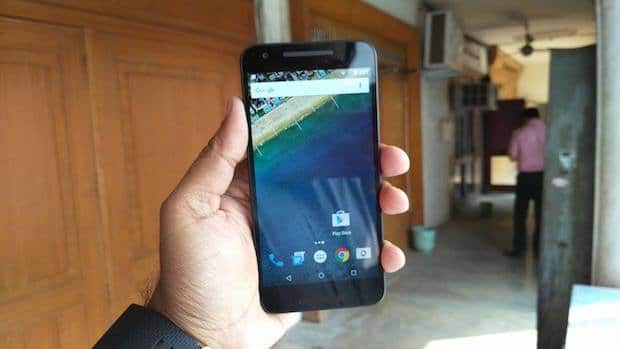 So is the Nexus 5X worth picking up? If you are a Nexus fan and do not have the budget for the 6P, we would say, it definitely is. The Nexus 6 does run it close but we think the camera and fingerprint scanner win the day for the 5X. But if you are looking for the best smartphone out there for the Rs 25,000, well, then we would pause to ponder. The 5X is definitely a contender in that price segment and wins back the “good specs at affordable” tag that it seemed to have lost at its launch, but it is by no means the only one good device under that price point.

But while it might not be the conquering hero that it is being made out to be, the Nexus 5X is in our opinion the best value for money Nexus phone around. If you love pure Android and want a very good camera without stretching your hand or wallet too far…well, then this could well be the device for you.

Was this article helpful?
YesNo
TechPP is supported by our audience. We may earn affiliate commissions from buying links on this site.
Read Next
Stuffcool PB9018W Magnetic Wireless Powerbank Review: Actually the perfect iP...
#Nexus 5X #review