Samsung Galaxy Note7 vs Galaxy S7 : How do They Stack up?

Samsung’s Note series has always had its very own fan following, something that very few of the other devices have managed to achieve. Be it the signature S-Pen or the consistency associated with all the Note iterations. The saga seems to continue with the Note7, but on the other hand, its sibling, the Galaxy S7, has gotten so much better with the last few iterations. The Note7 was unveiled at the Unpacked event last night and it does pack quite a punch. Let’s take a closer look at both the phones and demarcate the differences between them. 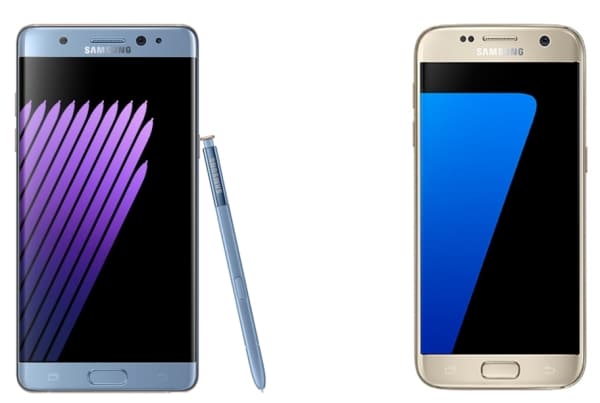 While the Samsung Galaxy S7 has borrowed heavily from the S6 design wise, the Note7 begs to differ. Thanks to the shrouded metal body and the rounded edges Note7 now bears a resemblance to the Galaxy S7 and the S7 Edge. Overall, I would have personally preferred the Note7 if it came with a more elegant design like it earlier used to.

Samsung has been packing an impressive display units from quite some time, be it the S-series or the Note. The Note7 comes fitted with a 5.7-inch QHD AMOLED display as opposed to the smaller 5.1-inch display in the Galaxy S7. Apart from the size, the display remains largely unchanged.

Both the Samsung Galaxy S7 and the Note7 will be offered with a 4GB RAM while the memory options range from 32GB to 128GB for the Galaxy S7 (supports microSD card up to 256GB). The Note7 instead settles with a 64GB internal storage and a microSD card that can further accommodate up to 256GB.

Samsung Galaxy S7 features a 12-Megapixel primary sensor with PDAF, OIS, and 4K video recording. The secondary camera in the Galaxy S7 is a 5-Megapixel sensor with an aperture of f/1.7 and auto HDR features. Both the phones share the same imaging unit so not much of a difference there.

Samsung had ditched the IP68 protection for the Galaxy S6 and the Galaxy S6 Edge, a move that seemingly backfired. The company backtracked and reintroduced the feature for Galaxy S7 and the S7 Edge. Thankfully, the Note7 is the first Note to be waterproofed and comes with IP68-grade certification which means that the device can withstand up to 30 minutes in water at depths up to 1.5 meters. The bottom line, buy either the Galaxy S7 or the Note 7 both won’t mind getting wet in water every now and then and yes now you can use S-Pen Underwater!

Samsung has also made some amends on the software front and Note7 will support the always on-screen just like its predecessor did. In fact, this is one of the few areas wherein the Note7 manages to differentiate itself from the S-Series and it is probably these very features that will appease a typical Galaxy Note customer. For records, both the Galaxy S7 and the Galaxy Note7 will run on Android Marshmallow flavoured with the Touch Wiz.

The Galaxy S7 comes fitted with a 3000mAh battery while the Note7 packs in a larger 3,500mAh battery pack but that being said the battery in Note7 has to bear the burden of a larger display. Security is yet another aspect that the newly unveiled Note7 triumphs at. Apart from the usual Fingerprint sensor the phone also comes with an IRIS scanner that is backed by an algorithm which detects the contours of the IRIS and translates it into a digital signature. Apart from that the Note7 also comes with a secure space, a literal vault for your personal things.

This is for the first time that both the Galaxy S7 and the Note7 look kind of similar and also the first time a Note phone has been blessed with waterproofing and dust proofing. Both share the same camera unit, SoC’s, RAM and a screen of identical resolution. The Note7 being from the Note Series offers the signature S-Pen which has now been greatly improvised and also opens up a plethora of features which one would be able to access only with an S-Pen. If you have been a devout user of the Note series and swear by the same, the Note7 will mostly not disappoint. However, if you are looking for a premium flagship phone with one of the best camera the Galaxy S7 will not disappoint you either.