We were hearing rumors that Google is going to pull the plug on the Nexus series, now further substantiating the rumor is the freshly leaked Pixel Launcher apk. Thankfully, the leaked Pixel Launcher was soon followed up by an APK and we did give the new rebranded Nexus launcher a spin. The Pixel launcher is trailblazing the strong rumors that the next Google flagship phone will don the Pixel name. 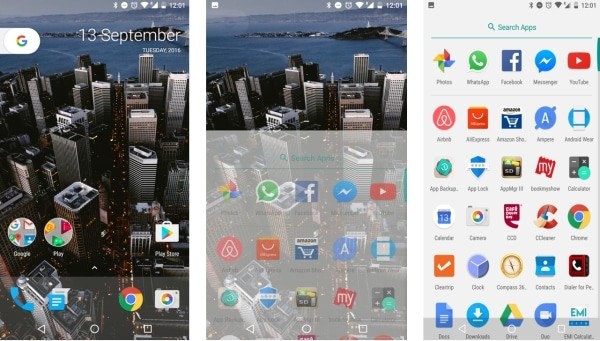 Pixel launcher apk can be downloaded here and installed on your device, however, if you have already installed the Nexus launcher, just go ahead and install the Pixel Launcher APK as an update. The initial bout of Pixel Launcher APK was leaked by Llabtoofer and mirrors have been uploaded to several other sites. The Pixel launcher does away with the app drawer icon and now the app drawer can be accessed by simply swiping up on the home screen. The launcher is devoid of any lag or sluggishness and instead it’s as smooth as silk. Also, the absence of App Drawer icon clears up space for another shortcut.

As we said earlier, the Pixel launcher is more of an improvised Nexus launcher and as a result, we do see a few features and gestures tweaked here and there. The Google Search button is now integrated into the Google button on the top left and no more occupies the entire home screen header. Tapping on the icon will activate the search bar and beyond this, it is pretty much similar to the Google Launcher.

The dedicated clock and date widgets have been revamped, but unlike before, tapping on the same will not take you to the clock setting menu (might be a bug which would be eventually worked up on). Moreover, unlike before the calendar widget cannot be removed or repositioned its just kind of stuck there. Searching for an app in App Drawer is almost identical to the Google Now launcher and so are the other major functionalities. Side loading the Wallpaper apk will give you access to a bunch of Pixel wallpapers segregated in various categories and a feature that will automatically populate different wallpaper every day, much like the Magazine wallpapers on the Emotion UI. The only downside i could see in the Pixel Launcher as of now is that it automatically disables the phone lock (at least in my Nexus 5X.)