When Apple unveiled the iPhone 7 and the iPhone 7 Plus, those who were expecting a militant redesign of the phone were disappointed. For, the Cupertino giant stayed with the broad outlines and form factor and indeed to a large extent, even the size, of the iPhone 6s and 6s Plus. But that doesn’t mean that there was no reason for cheer on the design front. Perhaps the biggest cheer for a design element in the launch came when it was announced that Apple would, after a brief sabbatical, be returning to one of the colours that defined the earlier iPhones – black. In fact, there were two variations of it – a matte black and a more glossy jet black. Yes, there would be the now-usual rose gold, gold and silver editions too, but make no mistake about it, it was the all blacks that caught the eye. 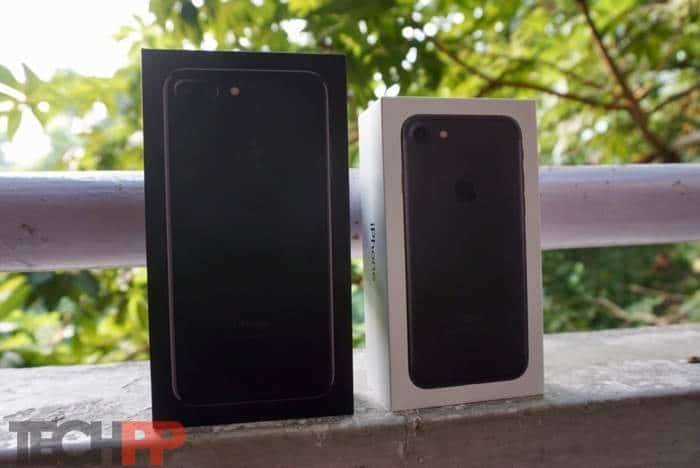 And well, we have got both black variations in our review units – the iPhone 7 in black and the iPhone 7 Plus in jet black. And we can say without any reservations that they look flat out gorgeous. Mind you, we still wish Apple had at least made some attempt to make them more compact – they are the exact same size as their predecessors.
The iPhone 7 remains 138.3 mm long, 67.1 mm wide and 7.1 mm thin, although it is a smidgeon (5 grammes) lighter than the iPhone 6s at 138 grammes. And it definitely feels better as well, with its rounded sides, whether it is the smoother than ever finish or the materials, we do not know. The front still is mainly about the 4.7-inch display but the home button beneath it now does not recess when you press it down but instead gives you a slight vibration as feedback (you can customize it if you wish). The back is smooth and does not pick up smudges and gone are the antenna bands that some considered to be eyesores on the 6 and 6s. The camera is slightly larger than on the 6s and alas, it still protrudes. The button placement remains the same – power on the right, volume and silent mode on the left, and the base now has twin speaker grilles flanking the lightning port. And no, there is no 3.5 mm audio jack (there’s a lightning to 3.5 mm adaptor in the box, though). 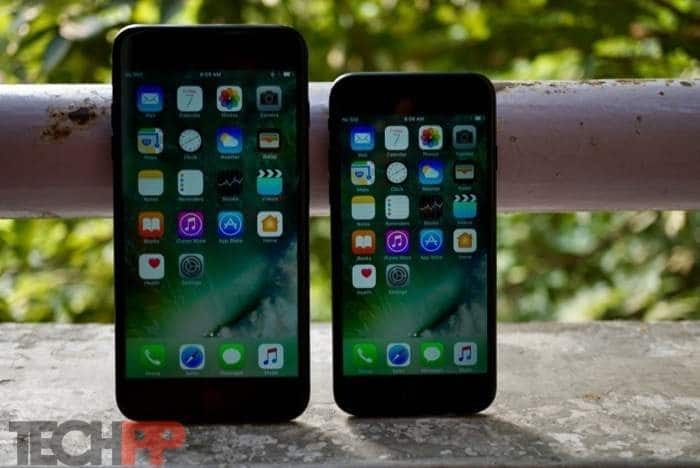 Also Read: 5 Things You Might Not Know About the iPhone 7

Its proportions might be the same as its predecessor (we are not complaining as it remains very comfortable to hold), but we really think the black model is easily the best looking iPhone we have seen for a while. If we had one phone to buy for appearance, this would be it – the black is a winner especially as it totally pervades the device (even the 4 and 4S had steel colored sides, remember?). This is a phone that does not scream “class,” it just radiates it.

Mind you, if you wanted to buy an iPhone that really stood out in a crowd, the jet black option of the iPhone 7 Plus would be a great option. Even before talking about the design, we would like to point out at the very outset that this phone is a case maker’s dream – that glossy black back picks up smudges as easily as the reputation of an Indian politician. But well, on the flip side, it does look incredibly glorious and quite unlike any black we have seen for a while – like the 7, the black here too is all pervasive and not interrupted by any chrome or steel colored elements. The black model will see people nod in approval, the jet black one will make people stare. ’Nuff said. 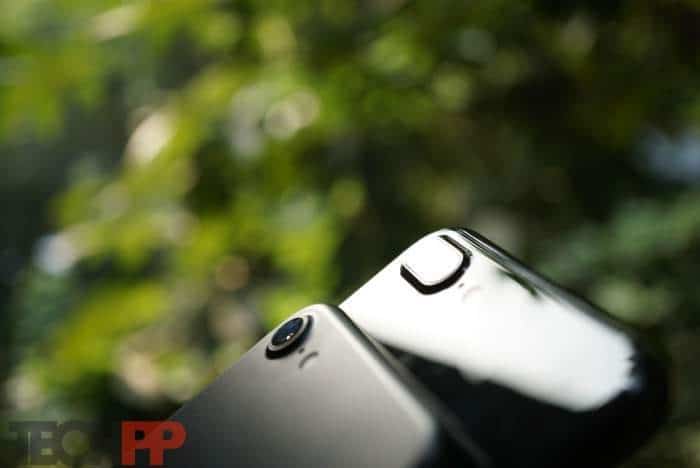 Another reason why the iPhone 7 Plus jet black will attract attention is because of its size. The iPhone 7 Plus unfortunately remains a bit of a monster in terms of proportions – it is as large as the iPhone 6s Plus at 158.2 mm in length, 77.9 mm in width and 7.3 mm in thickness. And this makes it one of the largest high-end phones with a 5.5-inch display, even though like the 7, it too is slightly lighter than its predecessor, the 6s Plus, being 188 grammes to that worthy’s 192 grammes. Once again, we could not help but feel that the device had a much smoother finish than its predecessor – it remains large but it just felt better in the hand, although the glossy finish does render it a trifle slippery.

The back is supremely glossy and as we said, will pick up smudges the moment you touch it, but perhaps the most striking feature in hardware terms on it is the dual camera arrangement, with one lens being a wide angle one and the other being what Apple terms a “telephoto”, allowing users to get “real” optical 2x zoom and an improved 10x digital zoom.The result is a much larger camera unit that sticks out even more than its predecessor did, but then some might think the means are worth the end. Button and port placements remain unchanged, although like the 7, the 7 Plus too has done away with the 3.5 mm audio jack and just like that worthy also packs in a lightning to 3.5 mm converter. 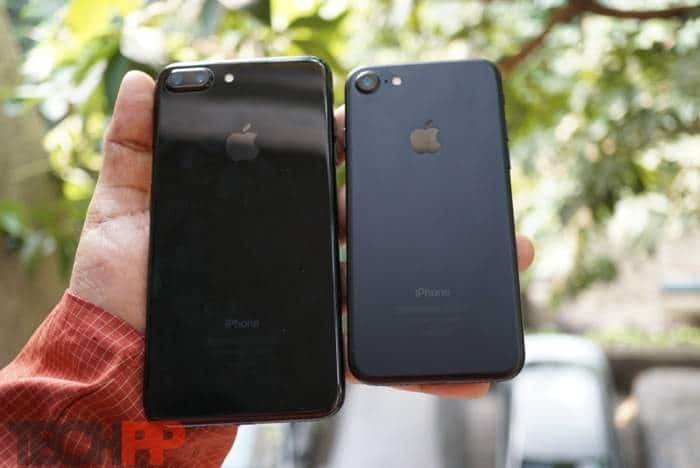 Both devices claim to be dust and water resistant, and come with hardware improvements – brighter displays with wide colour gamuts, the A10 Fusion chip which Apple claims is twice as fast as the one on the iPhone 6, stereo speakers, and a whole lot else besides. And we will be putting both of them through their paces in the coming days.
As of now, barely a day into using them, all we can say is that the iPhone 7 and 7 Plus after a relatively quiet design period have got back to being handsome after being just stylish. Blame it on the black. Because it is Beautiful. Beautiful indeed.

Was this article helpful?
YesNo
TechPP is supported by our audience. We may earn affiliate commissions from buying links on this site.
Read Next
[First Cut] Redmi Watch: A rather watch-ful debut
#First Impressions #hands on #iPhone 7 #iPhone 7 Plus