I have seen a fair share of video converters in the last decade or so but the need for one has been diminished at least for me, until now. The present day video players do offer the encoding ability that’s required to play a majority of video formats but there is always that one format which gives you a last minute headache and then you need to reach out for the good old video converter. The sole reason why we breached the topic of video converters is the HandBrake Video Converter, a converter that promises to have your back in case of video encoding troubles. 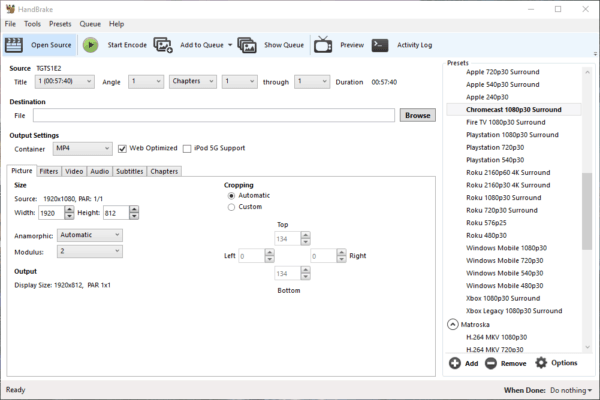 The HandBrake has not popped out of the blues and has been around for a while, quite a while actually. It was way back in mid 2000’s that Handbrake started as a program to convert video DVD’s, a novelty back those days. What this essentially means is that the tool has undergone several stages of metamorphism over the last 13 years and finally it’s being offered as one of the most comprehensive video converter solution, or so we believe. The latest HandBrake is available for Windows, MacOS and Linux can be downloaded here. For the sake of convenience I have listed below the mention worthy features of the app,

Preset as a feature allows users to select a certain format that is unique or rather optimized for a device. For instance, if you want to convert a normal mkv file (H.265) to play on an Xbox 360 (which as far as I know doesn’t natively support H.265 format) the program will auto adjust the parameters and will ensure that the converted video is best optimized for the Xbox. The software also supports other presets including Windows Mobile, Roku, PlayStation, and FireTV Chromecast. Also, the Handbrake adds support for new Intel QuickSync H.265/hevc which is meant for devices that run on Intel Skylake.

The program now comes with an improved subtitle rendering for some languages and this is something that should eliminate the subtitle errors found after the decoding. Users can also import SRT files and add it to the converted video files.

With the update, Windows users can finally pause and resume the encoding jobs. The command line interface which would require the user to respond to a visual prompt by punching in a command is removed thus making the Video Handbrake much easier to use. Using third party libraries for improving the productivity is common but this has feature has been incorporated in Handbrake from this version. Of course, including updated third party libraries has its own cons but again this is expected to take the productivity to a whole new level.

Apart from the previously mentioned additions the software will now support Ultra HD/4K, bake in the new anamorphic mode to increase the storage resolution and generic improvements with regards to the filter performance.

In a nutshell, the HandBrake 1.0.0 is one of the most comprehensive video converters I have come across and it leaves no stones unturned when it comes to features and micro tuning options. Apparently, the program is also much lighter on the Windows and being open source rest assured that it will get all the love it deserves from the developer community. The only qualm is the absence of quintessential video editing tools, yes, most of the video converters do come with video editing tool. That said the HandBrake is arguably the best open source video converter out there and by adding the new functionalities like the improvised list of presets the software is sure to get some traction.

Best Ad-Free Online Video Converters to use in 2022
Read Next
Source: HandBrake

Proactively Personal: what makes the Apple Watch special…
Seven Years, and STILL Going Strong: What Makes the ATH-M50x…
PS2: I love you! 20 years, 20 facts about the PlayStation 2
Ten years, Ten Amazing facts about the iPad
Happy Birthday to Mi: Ten Years, Ten Things You Might Not…
10 years, 10 innovations the Galaxy S series brought into…