After launching a slew of Lyf branded 4G enabled smartphones, Reliance Jio is now rumored to be working on its own feature phones. Incidentally, these features phones are said to support 4G VoLTE and reported to be priced below Rs 1,500. With that said, the first real image of such a phone has now emerged, thereby suggesting an imminent launch. 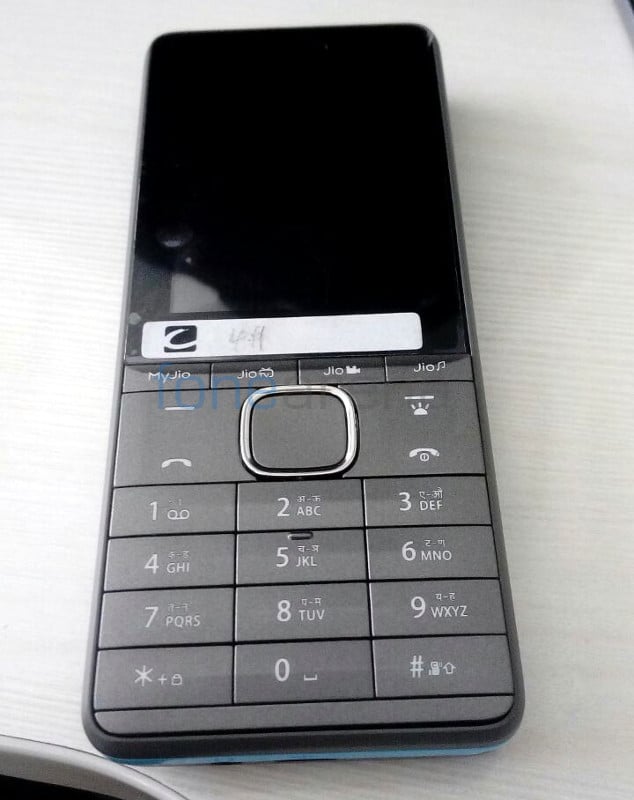 Despite its freemium policy, Jio has failed to tap on to the rural telecom market and that’s mainly due to the prevalence of feature phones in the country. Not everyone in India has the privilege of owning a smartphone, thereby resulting in a number of 2G users. To sort this issue out, Reliance seems to have taken the onus onto themselves to launch 4G enabled devices at an extremely low price point.

The phone that got leaked via the image appears to have an alphanumeric T9 keyboard, just like any other feature phone. Besides, there’s no touch screen too and by the look of its, the device seems to sport a 2.4-2.6 inch sized TFT display. The interesting part however is the four shortcut keys located at the top of the keyboard. Each of these four keys correspond to Jio’s own apps. These include MyJio, Jio Live TV, Jio video and Jio Music respectively. The phone also features a dedicated shortcut button for torchlight. It’s however worth noting that the manufacturer of the phone isn’t known yet. That said, the feature phone is reported to priced at Rs 1,299.

Recently reports suggest that these 4G VoLTE phones from Jio coming at a starting price of Rs 999 will be running on Android OS. That said, the possibility of the same looks rather bleak considering its dearth cheap price. However, in a country where a manufacturer dares to sells a phone at price of just Rs 249, anything is possible! Nevertheless, earlier reports also reveal that the 4G VoLTE calls on these feature phones will be enabled by Spreadtrum chips on the inside. There’s also a rumour going on regarding possible talk between Jio and executives from leading chipmakers Qualcomm and Mediatek to supply hardware components for these upcoming phones.

With these 4G enabled features phones in place, Jio would finally able to target the masses; as even now a very small percentage of consumers in India own 4G devices.

How to Buy JioPhone Next: Complete Guide and FAQ
Read Next
Source: Fonearena