In 2016, Indian company Smartron stepped into the product segment and launched the t.book and t.phone. And the company did get a lot of attention not just because of these two products, but also because of its high-profile brand ambassador-cum-investor, Indian cricket legend Sachin Tendulkar. However, after that start, we did not see a lot from Smartron and it pretty much receded into the background. But just when a number of people felt that the company was taking a tech sabbatical, Smartron has launched another smartphone, and with a distinct Sachin touch to it as well – the srt.phone (SRT stands for his initials – Sachin Ramesh Tendulkar), with the Master batsman and a quote from him featuring on the packaging as well. The latest addition to the product portfolio, unlike the t.phone is very much a mid-ranger and starts at Rs. 12,999. We got its high-end version (4 GB RAM + 64 GB storage) priced at Rs. 13,999. Which puts it in the firing zone against some seriously good devices. Will the srt.phone hit a century or a duck? 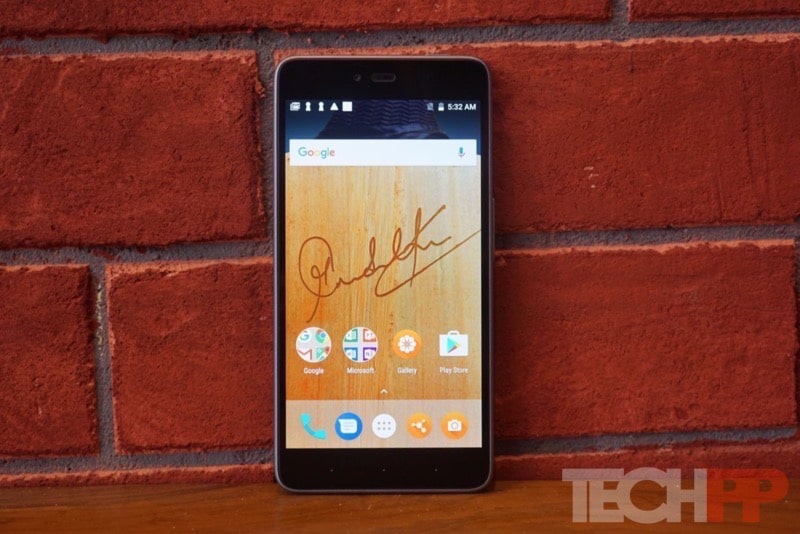 The smartphone comes with a 5.5 inch full HD display, protected by Gorilla Glass 3. The display is bright and colorful. We could easily use it on a bright sunny day. The screen mostly covers the front of the phone has got three capacitive touch buttons for recent apps, home and for going back just below the screen. The three buttons are backlit and stand out on the black bezels around the phone, making it easier to use the phone in dim-lit environments. Above the screen, the phone sports the secondary camera, the earpiece, and the proximity sensor. 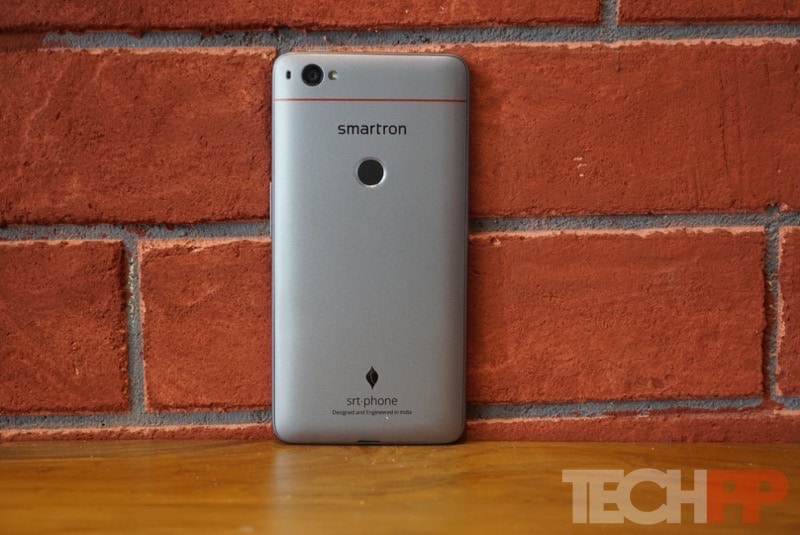 The stand-out bit comes when you flip the phone. While most of the mid-range phones boast a metal unibody, the srt.phone comes with a removable plastic back underneath which there are two Nano SIM slots. The back carries the primary camera with LED flash and a fingerprint scanner. There is also a hint of orange on the back with the usual Smartron orange band, the Smartron logo, and Srt.phone written on the back – the orange is. However, this time restricted to just a stripe, rather than a broad band as we saw on the t.phone. Smartron tells us that there will be alternative back covers feature Sachin Tendulkar – honestly, we think having him on the back cover right away would have been more compelling. The power button and the 3.5mm audio jack sit on the top while the speaker grille and the USB Type-C port are placed on the base. The smartphone measures 152 x 77 x 8.9 mm and weighs 155 grams.

All in all, we think the srt.phone is comfortable to hold and has got an excellent grip. It was a little difficult to use the phone with one hand for people with small hands (the power button at the top is inconvenient really), but if you have standard sized mitts, we think the phone is easy to use. That said, there is no 2.5D curved glass on the phone and the fact that the company has chosen plastic over metal on the back may annoy some of the design pundits out in the market, as it deprives the device of the sort of premium feel that we get on say, the Redmi Note 4 (in particular the black one). Yes, that back makes the srt.phone stand out from other budget and mid-range bracket devices, but different, alas, is not really synonymous with good looking, especially in this case.

The srt.phone is definitely a step down from the t.phone in that it is more a mid-segment device than a flagship, which is ironical when you consider that it is named after a champion cricketer. That said, it has got some decent (though not Sachin-like) numbers up its sleeve in the performance department. It comes with a 1.8 GHz octa-core Snapdragon 652 processor coupled with 4 GB RAM and 64 GB internal storage. The phone does not come with expandable memory which might be a little problematic for some, although there is unlimited cloud storage at the company’s own tcloud. The SD 652 definitely helps the phone in keeping the performance up as compared to many phones falling in the mid-range segment. Not only did the device breeze through the multi-tasking and the casual gaming zone but was also impressive in the high-end game zone. We played Asphalt 8, and NFS No Limits and the smartphone passed the test with no hiccups. While there was no lagging in our experience, the phone did heat up a bit while we used it extensively but it did not reach an alarming stage at any point. It scored 61473 on the AnTuTu benchmark, which is pretty acceptable keeping in mind the price of the phone. The fingerprint sensor on the phone also works quite fast, and the call quality on the phone is excellent, as well. 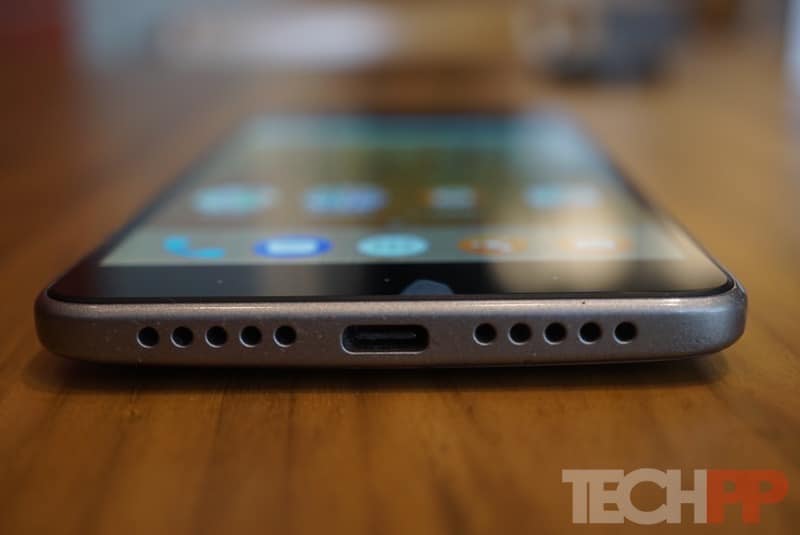 The srt.phone a couple by a 3000 mAh battery supported by Quick Charge 2.0 and also comes with a USB Type-C Port. The battery could only last for a day (mostly) when we stretched it to the limits. Given the fact that the phone is not exactly small in size, we think Smartron could have added a bit more mAhs to the battery giving it at least a competition-worthy battery backup (remember the Redmi Note 4 has a 4100 mAh battery at that price). But as the phone comes with Quick charge 2.0 support, we found that it charged from 0-100 percent in around 1.5 hours and gave us a battery of couple of hours in merely 30 minutes.

The Srt.phone comes with a 13-megapixel rear camera with PDAF and LED flash and 5-megapixel front facing camera. The primary camera performs well in good light conditions. In well-lit environments, the camera produces pretty good colors, and the images are also well-detailed. It also manages to throw in a bit of bokeh in some of the macro shots. But everything just drops as we move to low light scenarios. The camera just could not handle them well and produced images that were grainy and lacked color, and although the phone comes with PDAF, we found it had some focusing blues while capturing a moving subject, and we ended up with blurry shots time and again. 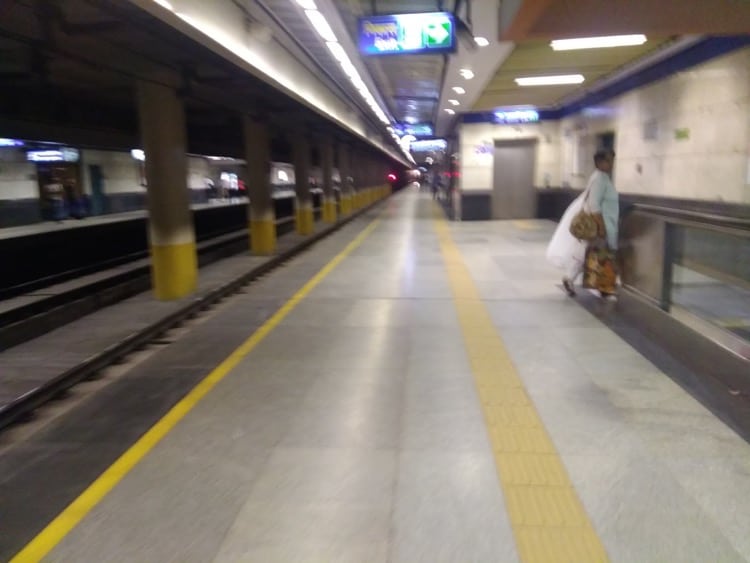 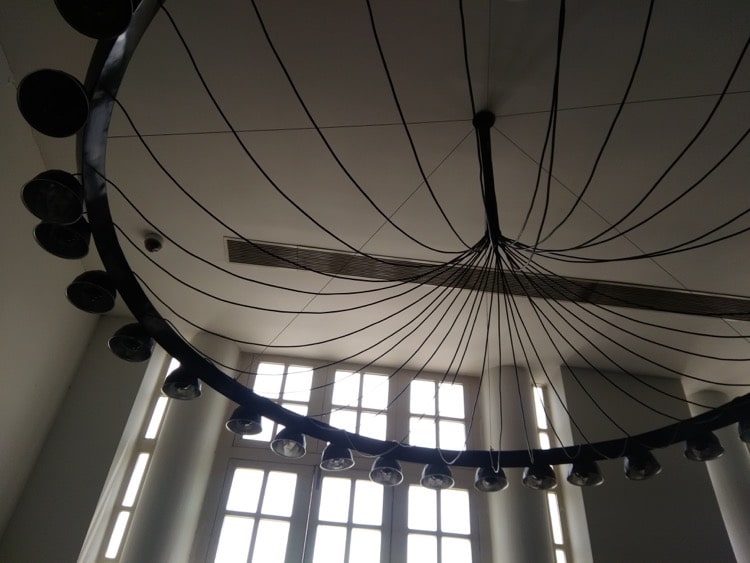 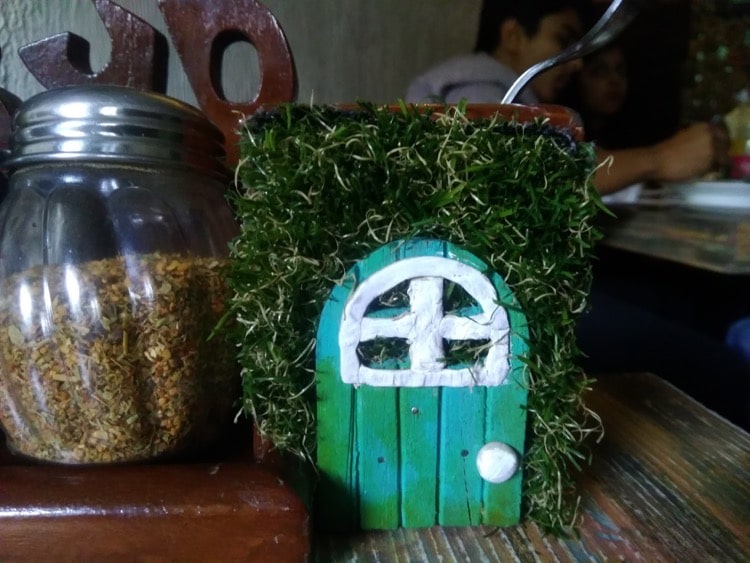 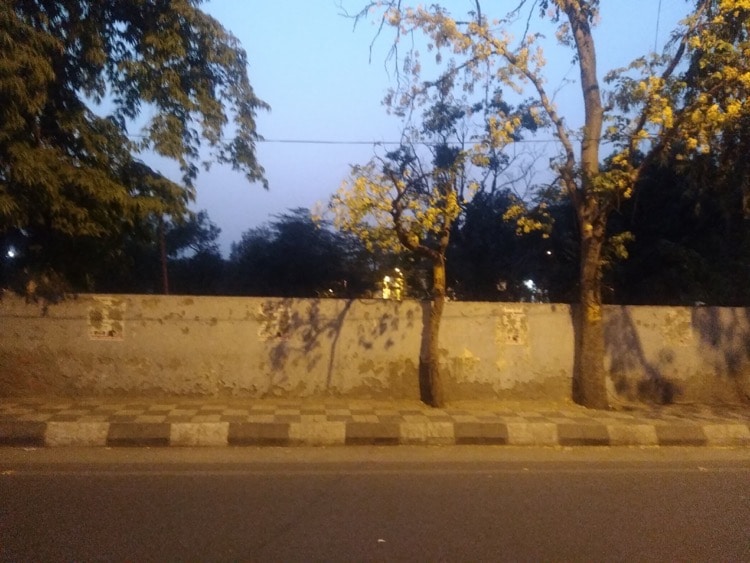 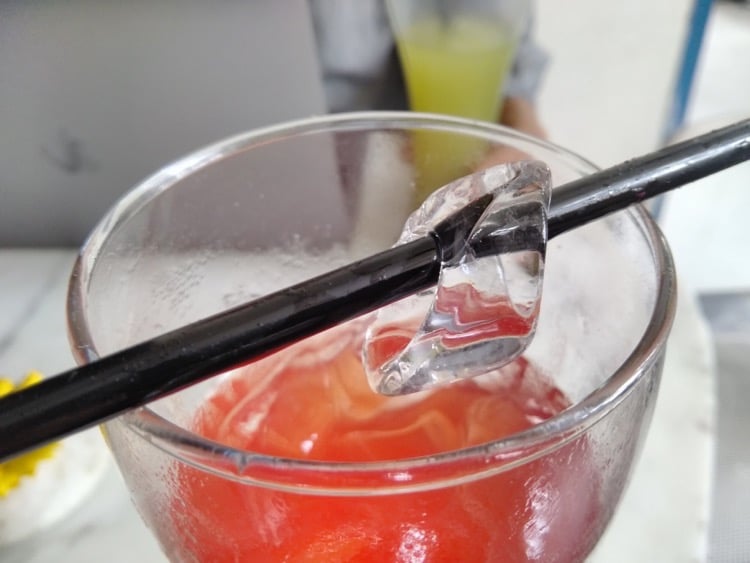 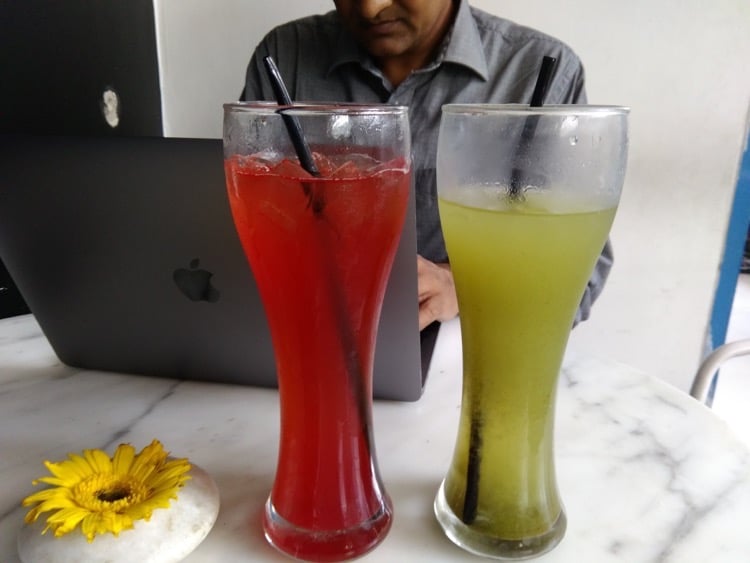 We had similar issues with the phone’s secondary camera as well. The camera was not exceptional but delivered acceptable images in sufficient light, but lost ground and gave us noisy selfies when the lights dimmed.

Android, plain and stock…nothing Sachin about it

Regarding the software, the srt.phone comes with the latest Android in town, Android 7.0 Nougat, and sticks to a largely stock Android interface. Not only this, but the company has also promised three other major Android updates for the phone, which it says it will deliver faster than any other manufacturer. 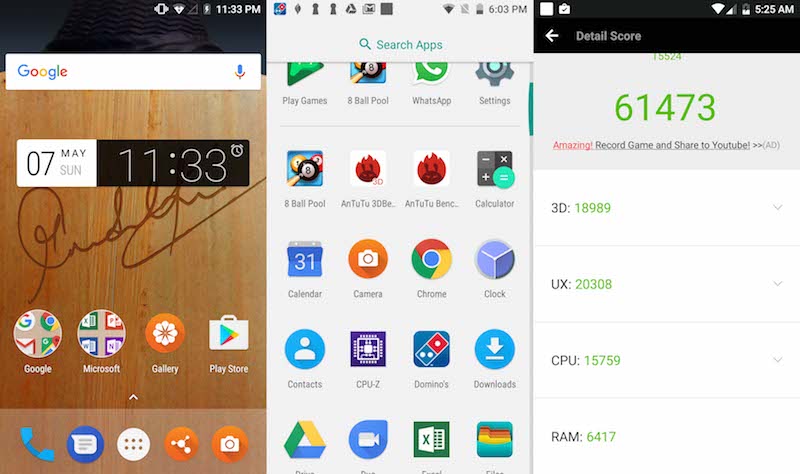 The user interface of the srt.phone is straightforward and easy to use. It is not loaded with third party apps but comes with five basic Microsoft office apps installed. The phone also has the company’s tron.x app through which one can buy Smartron accessories from the tstore, use the cloud space provided by tcloud which sort of makes up for the limited storage on the phone and allows you to talk to the executive of the company through tcare. Rather surprisingly, apart from the wallpaper, there is no real “cricket” or “Sachin” element to the phone – we really think Smartron missed out on a trick here, considering the extent to which it tried to associate Sachin with the phone.

Sachin, caught by Smartron, but will the masses be bowled over? 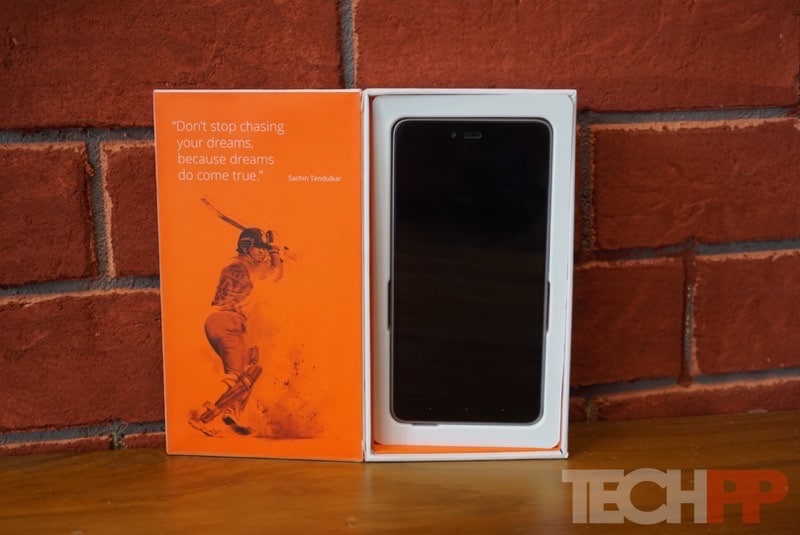 The srt.phone might not be a record-setter like the person it is named after, but it scores well in most departments. However, we think it falls short in the camera and the battery departments. And it does have to go up against some excellent performers like the Redmi Note 4 from Xiaomi, the Moto G5, and the camera-centric Honor 6X. As compared to these, it does not really have a single killer or compelling feature – yes, it is a consistent performer, but it does not have a real ace up its sleeve, apart from the legendary nomenclature.

To use a cricketing simile, we would call it a solid middle-order batsman rather than a star opener or number three.

[shopsmart product=46191]
Was this article helpful?
YesNo
TechPP is supported by our audience. We may earn affiliate commissions from buying links on this site.
Read Next
Skullcandy Mod Review: Betting on doing the basics well
#review #Sachin Tendulkar Phone #Smartron #Smartron srt.phone