The Idiot Box is Dying...

It’s no mystery that Indians have been consuming a lot more internet data ever since the Reliance Jio revolution. However, cable television was still an integral part of their lives but a new report begs to differ. According to the latest internet trends statistics by Kleiner Parker, the time spent on mobile is a staggering seven times more that of television in the country. 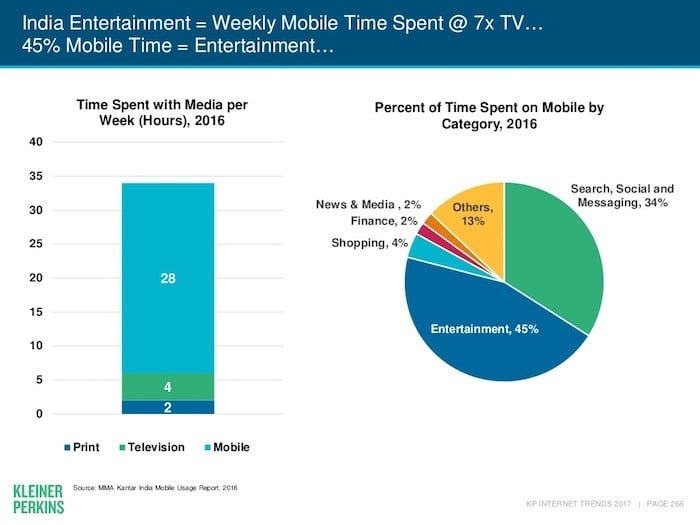 The report further states that Indian users were devoting almost twenty-eight hours every week on mobile and just four on television in 2016. Entertainment on mobile, in particular, is at 45% (~12 hours) of that overall usage which means it’s still three times more than the media being consumed on the idiot box. Furthermore, print media stands at just two hours which is quite expected as users continue to migrate online where news is generally free of cost and more diverse.

However, news on mobile doesn’t account for a significant share, the report says every week, Indians spend only half an hour on news and media (1 hour if we include Financing apps). Social networks and messaging platforms, on the other hand, are responsible for almost ten hours and shopping for roughly an hour. 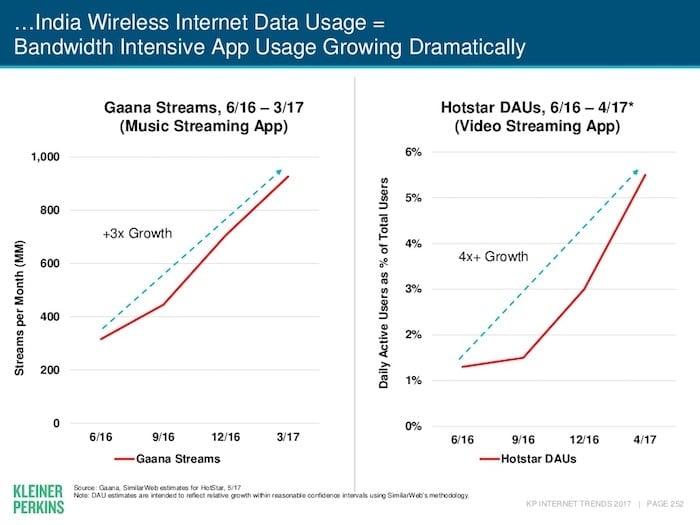 The most paramount rationale behind the shift is the presence of on-demand channels online as compared to limited control on television. Carriers, as a result, have been attempting to converge these two sources into one with specialized (or hybrid) digital set-top boxes like the Airtel Digital TV which was launched almost two months ago.

Streaming services such as Gaana and Hotstar have witnessed a whopping three and four times increase majorly after September 2016 that is post Reliance Jio’s commercial launch. Additionally, internet consumption on mobile constitutes for almost eighty percent of the total spectrum and desktop for twenty. 72% of this (64% of the population) are aged under thirty-five which clearly explains why most marketing strategies are targeted at luring in millennials including the selfie-oriented smartphone trend.

As data continues to become more affordable, cable TV will become extinct in the next few years or quarters. On that note, check our in-depth feature on the impending demise of DTH.

Delhi government uses Google Maps to fight hunger in…
[App Blog] "Apple Was Too Scared to Acquire Me": A Crazy…
Tech advertising in times of Covid-19: Not just about…
Stepping outside in Covid Times? Look at Google Maps before…
Social Networks rise, Shopping falls: How Indians are Using…
iPhone 12 Series Cashback Offers for India Announced, iPhone…