Bluetooth speakers, the portable ones at that, are becoming increasingly popular. Carrying them along to a pool party or a barbecue hangout or maybe just playing a soothing background in the drawing room as the family gathers around is something that we all tend to do these days. One of the main catalysts for this is the ease with which you can pair your smartphones and become a DJ on the fly! And there are plenty of them out there. 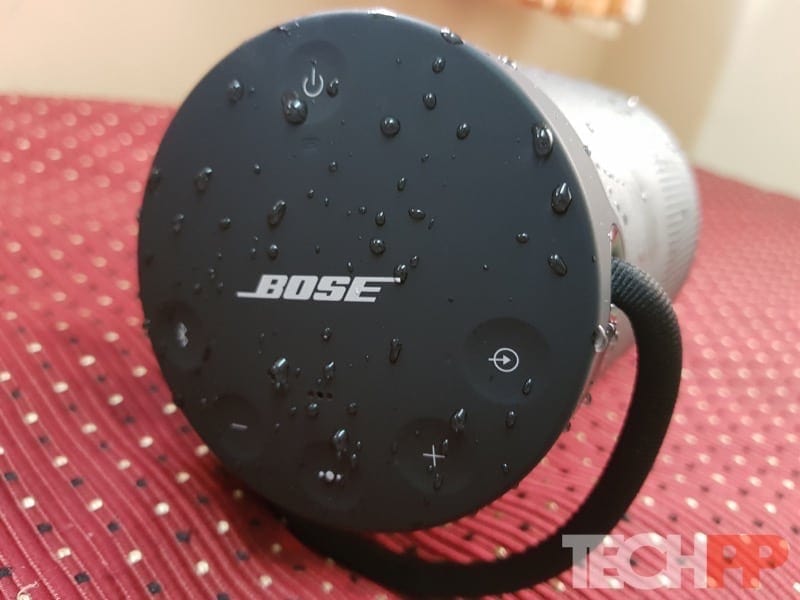 When it comes to audio, BOSE is a name that you simply cannot miss. You may not own one but would’ve mostly experienced one for a temporary period. Sounlink Revolve+, a successor to the Revolve, is what we are going to walk you through today after using it for nearly a month. Did we like it? Do we recommend it? The following lines hold the answers to those questions and more.

The construct – one heck of a unit

For a Bluetooth speaker, the Revolve+ will raise those eyebrows. When I first placed it in our drawing room table, my wife asked me if it was a new “smart” vase! My mom asked if it was a new juice container, all this until they saw the BOSE branding upon close inspection, something that can deliver sound in all directions / 360 degrees. In fact, this tapering cylindrical aluminum piece of work isn’t wrong with its design as it can be easily concealed with the décor and you can pull off surprises to your folks. As tall as 7.25 inches, 10.5 cm wide at its bottom and weighing close to a kilogram / 2 pounds, the Revolve+ comes with a rubberized top with some buttons on them and a flexible handle to carry it around. It has IPX4 certification, and this means it can take that occasional splash of water when you’re by the pool. An IP67 would’ve been much better, but on the brighter side, the unit is so sturdy that it can take some nasty falls – not that you go about dropping it intentionally! 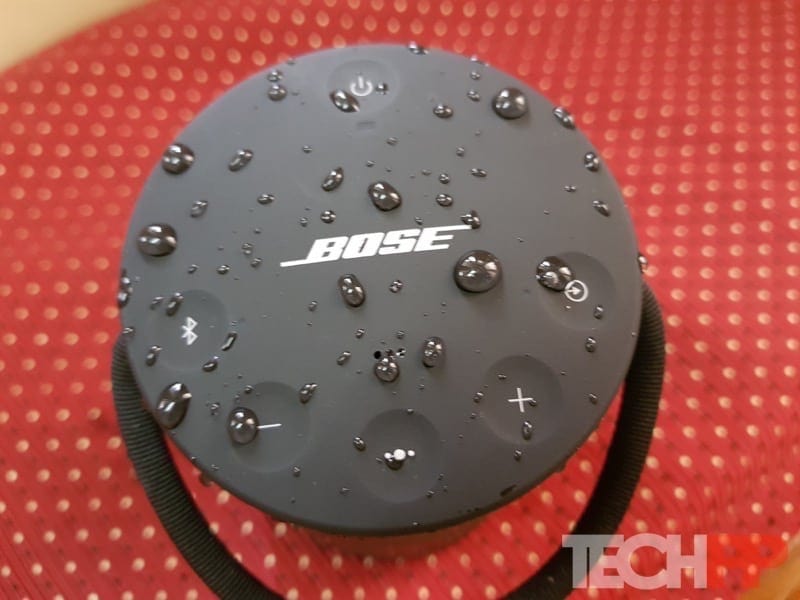 That rubberized top has buttons for controlling the volume, powering up, a multi-purpose one for answering calls and switching the source. At the bottom are the micro USB port for charging and a 3.5mm AUX jack. The bottom surface comes in with a slot that can be used to screw the Revolve Plus onto a trip stand – quite handy! But we never used it that way. There is a charging cradle that BOSE also sells for this but that is additional cost again.

The Sound – balanced yet punchy

When it’s BOSE, there is a certain amount of “faith” that their devices deliver. And this is because of the rich sound engineering that goes into making their devices. A bit of it is hype, but don’t take anything away from these folks. The Revolve+ is nothing new when it comes to that. The output is so crisp that you can instantly tell the difference if you were to listen to any other speaker say JBL or Sony. Not that the latter is bad, but just that former is so good, the difference is very noticeable for the purists.

We tested it with a wide range of music. When it was Iron Maiden’s Bruce Dickinson screaming away at the Rock In Rio concert, the sound coming from the crowd and his mic was so cleanly separated, one has to listen to it to appreciate it. One can tell the sound off the drums and the guitars easily. One of the toughest parts is to recognize the sound off the bass guitar, and even that was neatly delivered showing how good the lows are.

We tried a lot of Yanni, Kenny G, Chemical Brothers and so on, and they sounded brilliant and crisp overall. For the ones with sharp ears and the nit picking purists, the depth of the bass is a tad more than it should be and it’s how one likes it. Some prefer it, and some don’t. While it nails the highs, the mids tend to be a little on the lower side. 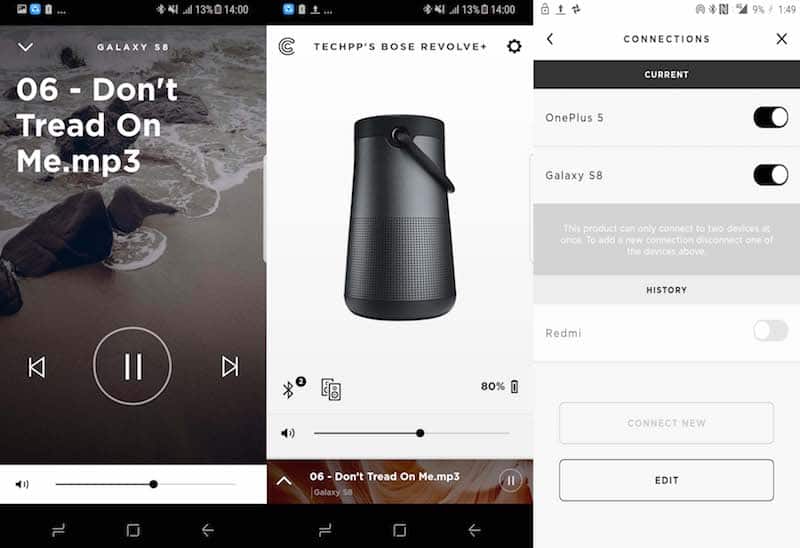 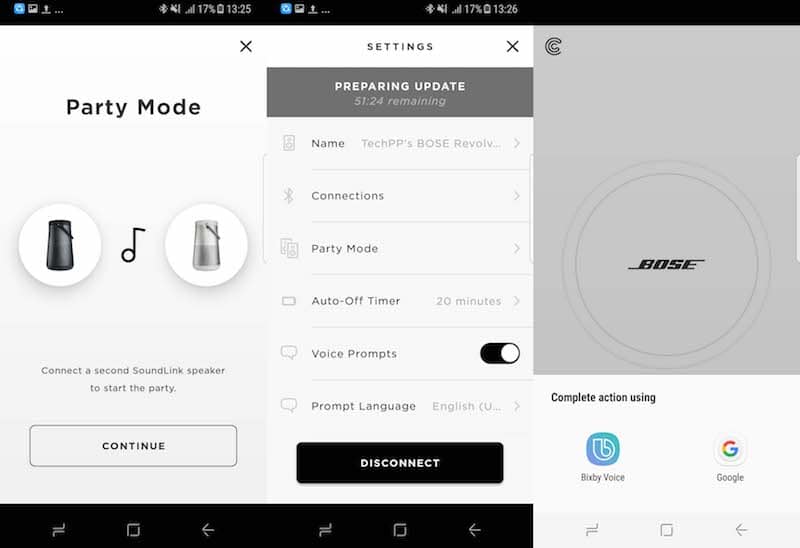 And for all the bass lovers, the Revolve Plus delivers truly thumping music. Be if trance, techno, hip hop or all those genres with bumped up beats the output is going to get your foot tapping or just have you get up and dance!

From the lowest to the highest volumes, the Revolve+ has a good command on the controlling the distortion and perhaps only beyond say 98% of the volume would the nit picking purists be able to tell of some distortion. Be it highs, mids or lows, they’re all well balanced in almost all cases. Achieving all of the above for a speaker that is showering audio 360 degrees, is truly marvelous. 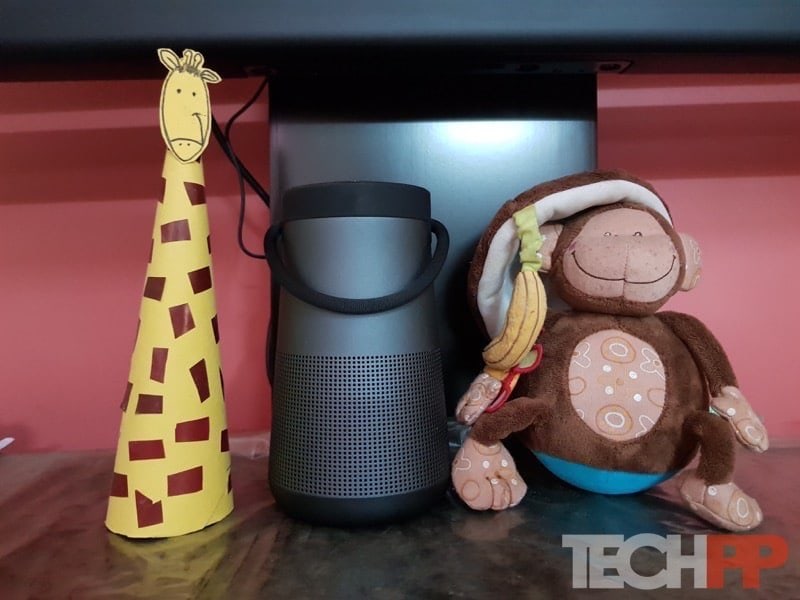 The Revolve Plus can also do several other things than just play music for you. It can take phone calls, and the mic is pretty good too, we were as far as 6-8 feet away, and the ones on the other side could still listen to us. Long pressing the multifunction button can bring up the personal assistant on your phone, Google Assistant on Android phones and Siri on iPhones – quite handy. The instant you turn on the device it tells you the amount of juice left in the battery. You can also pair the Revolve+ to another Revolve+ and can also be used with BOSE’s mobile app that has lots of features built into it. The app also remembers more than ten devices that are paired. Speaking of pairing, it can also talk to your devices via NFC for that touch and go playing.

The Revolve Plus takes close to 4 hours to charge up fully and lasts for a good 9-11 hours on 50-60% volume. BOSE claims 16+ hours, but again it depends on how one uses it. These numbers are not bad at all, but we would’ve liked to see alternative technology to accelerate the charging for a speaker that is mostly going to be used while on the move.

Worth it – we educate you? 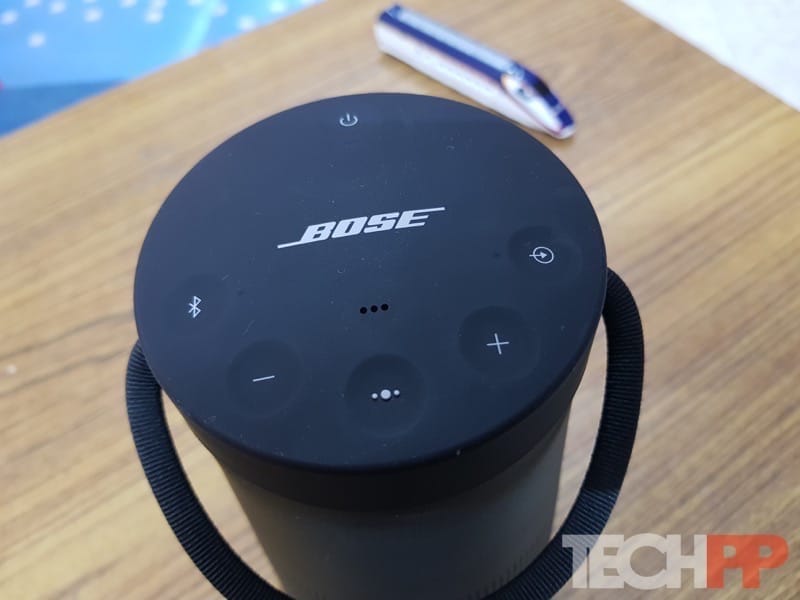 When it’s about BOSE, nothing comes cheap. The Revolve+ sells for around Rs 25,000, and the cradle is around Rs 3,000. The design is good, and the build is sturdy. The sound output delivers to most of the expectations. But where it disappoints is the average battery life and the lack of an IP67 certification that’d have allowed the Revolve+ to be an adventurer’s or a party animal’s better friend. Making it sturdy like a tank and not much of dunking into water powers is a bummer, especially when you’re paying so much! Lots of other speakers from competition come with those features. Should you buy the Bose Revolve+? Well if you’re a hard code BOSE fan and ok with the price and the shortcomings then go right ahead but also consider JBL’s Flip and UE Boom 2 while you’re in that pursuit.

Was this article helpful?
YesNo
TechPP is supported by our audience. We may earn affiliate commissions from buying links on this site.
Read Next
Skullcandy Mod Review: Betting on doing the basics well
#Bluetooth Speaker #Bose #Bose SoundLink Revolve Plus #Bose Soundlink Revolve+ #review