They are perhaps the two most evenly match devices in the budget flagship segment at the time. And yet are as different as chalk and cheese. Each offers a flagship experience with its own distinct flavor but at a price that is surprisingly low. We are talking of course, of the OnePlus 5T and the Moto Z2 Force. While the OnePlus 5T has pretty much been the gold standard for the budget flagships in the Indian market, the Z2 Force is Motorola’s effort to get back into that segment. The OnePlus 5T is riding high on the budget flagship wave with its combination of cameras, design (if a little familiar to some), Oxygen OS and great hardware. Against this, Moto Z2 Force throws a very distinct design, good hardware and the power of its modularity (via Moto Mods), not to mention its own dollop of brand equity. And of course, both devices are gunning for the sub-Rs 35,000 flagship phone segment. Which one wins? 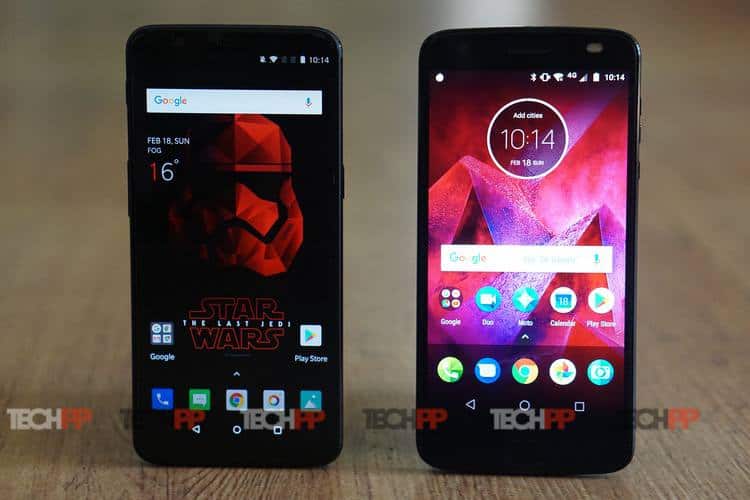 This is going to be a clash of tastes, more than anything else. Both the devices are very eye-catching in their own ways – the OnePlus 5T with its tall 18:9 aspect ratio display and curved metal back, and the Moto Z2 Force with its slightly more old fashion 16:9 front but a super sleek brushed aluminium finish on the back with a very distinct spherical camera unit. Both phones are very sleek – the OnePlus 5T is 7.3 mm thin, while the Z2 Force is slightly thicker around its camera module, but is otherwise a mere 6.1 mm thin. Yes, there will be those who will point out that the OnePlus 5T has a more ‘contemporary’ and taller look thanks to its having an 18:9 aspect ratio display, which also allows it to squeeze a 6.01-inch display into a frame that is about the same size (and slightly less wide) than the Z2 Force, but on the other hand, the device does look a little more ‘predictable’ – you can confuse it with other Android flagships – while this accusation cannot be levelled at the Moto Z2 Force, thanks to its distinct camera unit and even the golden mod pins. The Z2 Force also has the sturdier build thanks to that ShatterShield display which can take falls from heights of up to five feet, without cracking, although it does pick up scratches rather too easily. We are scoring this one to the Moto Z2 Force, but by a very thin margin – and if you slap that bundled TurboPower Mod on to the Z2 Force, it loses this round (the ridged rubber finish on the back does not go that well with that metal and glass frame). 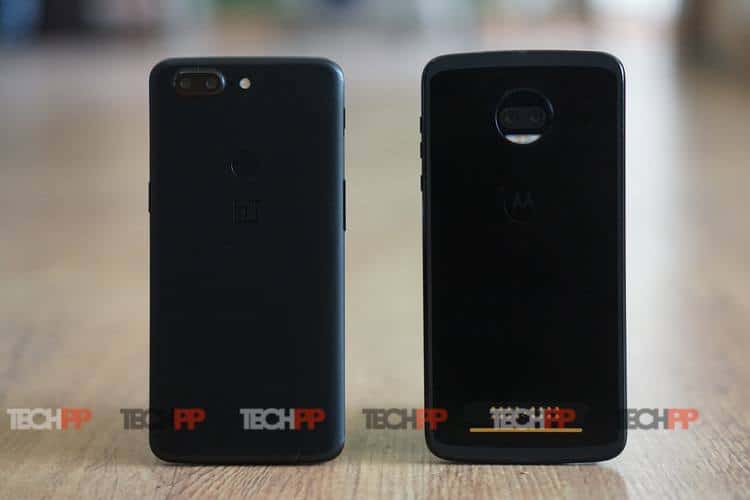 It is once again a very close finish here because the two devices are so well matched. Both have AMOLED displays, are powered by the Qualcomm Snapdragon 835 processor, have dual rear cameras, have similar connectivity options, and while the Z2 Force has just one variant (6 GB/ 64 GB), the OnePlus 5T has two (6 GB/ 64 GB and 8 GB/ 128 GB) but with no expandable memory option. There are points of differences though – the displays are AMOLED but while the OnePlus 5T has a 2160 x 1080 resolution on a 6.01-inch display, the Z2 Force has a 2560 x 1440px resolution on a 5.5-inch display. Then there are the cameras – the OnePlus 5T has a 16 megapixel and 20 megapixel camera set up at the rear for better low light performance and depth of field, while the Z2 Force has two 12 megapixel cameras, one monochrome and one colour, albeit with the same objectives (better low light detail and general bokeh).

The OnePlus, however, bosses it when it comes to selfie cameras, boasting a 16.0-megapixel front shooter as compared to the 5.0-megapixel one on the Z2 Force. The OnePlus 5T also scores in terms of having a bigger battery – 3300 mAh as against 2730 mAh – and well, we can see many people cheering the fact that it has a 3.5 mm audio jack (the Z2 Force has none, sacrificing it at the altar of ). But this is where the secret weapons of the Z2 Force come to the party – the ability to support Moto Mods, which allow you to attach covers, extra battery, speakers, a gamepad or even a projector to the device. And the fact that the Z2 Force comes bundled with a 3490 mAh TurboPower Mod adds a lot of weight to its claims. We are calling it a tie – the 18:9 display, higher megapixel count cameras, greater RAM and storage option and larger onboard battery of the OnePlus 5T being canceled out by the modularity, bundled mod, higher resolution display, water resistance, and expandable storage of the Moto Z2 Force.

Software – U and I in this Oreo world… 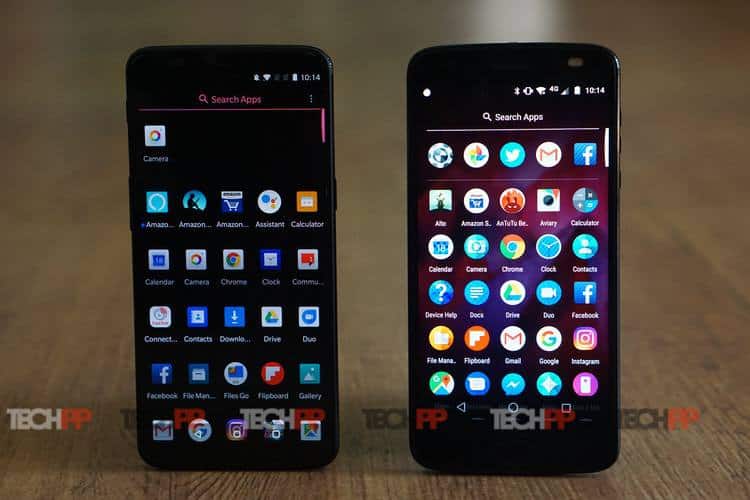 Another round, another close fight. Both devices come with Android Oreo out of the box, but with slightly different variations. While the Z2 Force comes with Stock Android with some Moto touches thrown into the camera app (a depth mode and depth editor) and Moto gestures, the OnePlus 5T comes with Oxygen OS, that is one of the cleaner Android skins we have seen with hardly any additional bloatware. It is again a close fight – both interfaces are fluid and easy to use, and while Moto’s gestures (twist to launch camera, wave your hand over the display to see notifications, use “show me” to get information, and others) might appeal to some, OnePlus has added face unlock to the 5T and also wins points for being more regular with its software updates (sometimes to the point of irritation, but hey, more updates are always preferred!). Another tie, we say. We TOLD you it was close.

Camera – say cheese, front and back 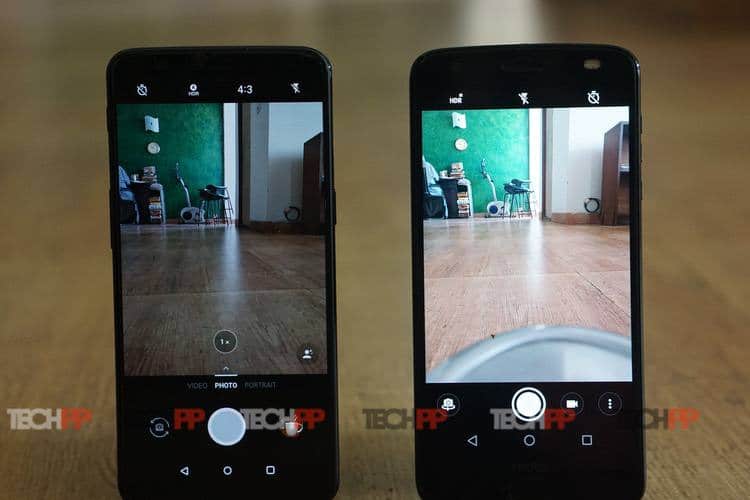 The cameras are one area where the two devices seem to differ significantly. As we pointed out in the hardware section, the OnePlus 5T seems to have the megapixel advantage with 16 and 20-megapixel snappers on the rear and a 16-megapixel selfie camera, as compared to the dual 12-megapixel shooters on the back of the Z2 Force and a more modest 5-megapixel selfie handler. However, in terms of performance, the battle turns out to be a very close one. In normal and good light conditions, the Z2 Force pretty much holds its own against the OnePlus 5T, often delivering more detail and colors that are more realistic (that said, some might prefer the more ‘poppy’ colors from the 5T). In low light conditions, it really depends on what matters to you – the Z2 Force manages to dig out a little more detail but the 5T has better color handling. We, however, think that the portrait mode on the OnePlus 5T delivers better results than the depth mode on the Z2 Force, although the latter does let you shift focus wherever you want on the image. In this close a battle, the selfie camera delivers the decisive blow – the 16.0-megapixel snapper on the OnePlus 5T easily beats its 5.0-megapixel competitor in terms of both detail and color. Add Face Unlock to the mix, and this round goes to the OnePlus 5T. 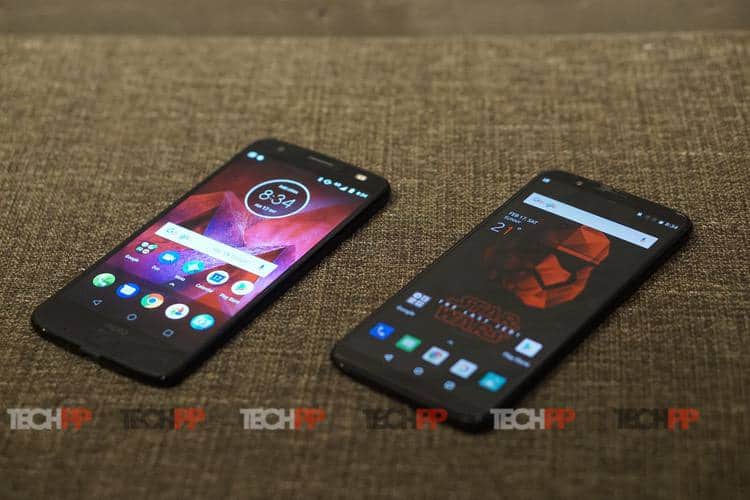 The jury is out on whether mods will make a difference to smartphones in the long run. Well, a mod did totally tilt this round. Without the TurboPower mod, the Moto Z2 Force would have been playing second fiddle to the OnePlus 5T, with its 2730 mAh battery seeing out a day of use easily but not lasting as long as the 3300 mAh one on the latest Never Settler. But then the Z2 Force comes with a 3490 mAh TurboPower Mod and that effectively drives its battery to a massive 6220 mAh, which easily lasts anything from two and a half to three days. The TurboPower Mod charges the phone very fast too, so you can actually slap it on for a while and then chuck it back into a bag (it is a bit of an eyesore in terms of the bulk it adds to the device) after having charged your phone. It is a win for the Z2 Force here, but only because of the Mod, which to be fair, is bundled with the device.

Multimedia and gaming – lags? What lags? 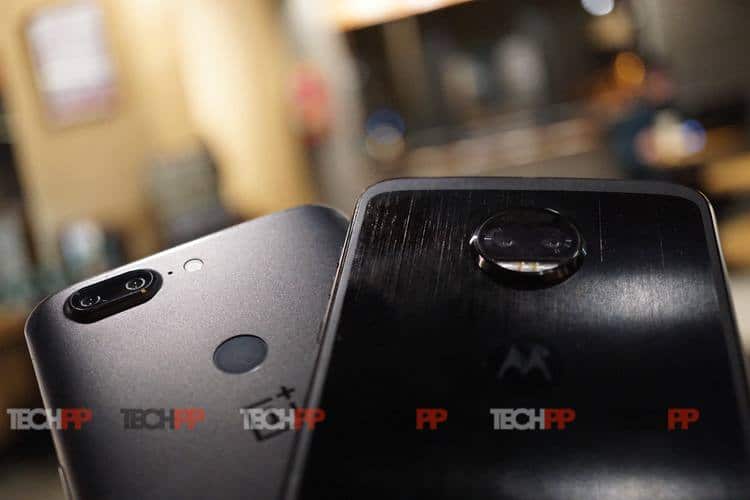 With hardware that is very evenly matched, it is hardly surprising that both devices pretty much are on par when it comes to handling high-end tasks and multiple apps. You are unlikely to get any lags in any conditions with that flagship level hardware. Which makes comparisons very difficult indeed. There are some who would prefer gaming on the larger display of the OnePlus 5T, though. And while those using the OnePlus 5T will point to the presence of the 3.5 mm audio jack for using headphones, we think that that advantage is offset to an extent by the presence of a front-facing speaker on the Moto Z2 Force, which delivers better sound than its counterpart on the OnePlus 5T. No, we are not going to involve the gaming and multimedia mods here, but their presence does make a difference for those wanting to be in the Moto world for a while – that said, they work ONLY in the Moto world. This is going to sound predictable, but hey, this is another tie.

High-end hardware and software ensure that both the devices are very evenly matched when it comes to handling routine tasks like browsing the Web, social networks, messaging and making calls. We would say that the Moto Z2 Force had a slight edge when it came to call quality but then the larger display of the OnePlus 5T did make Web browsing a better experience. But really we are going to score this a tie again because there is no real discernible difference. 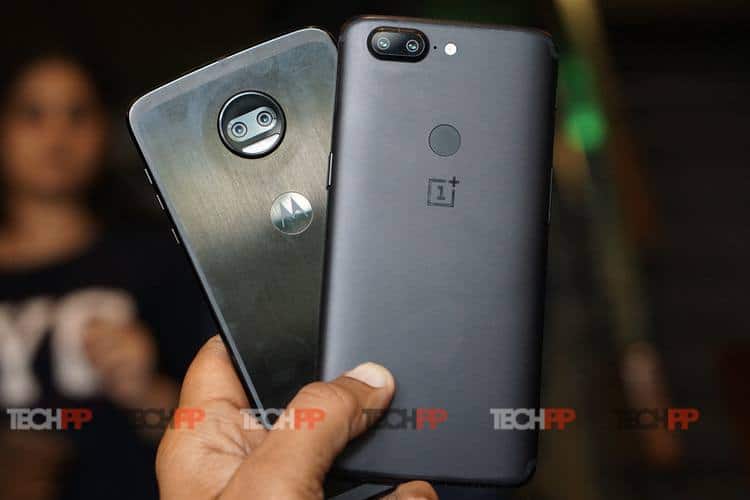 Which, of course, brings us to the clinching question: which of the two wins? That is not an easy question to answer, when the two devices compared tie in five of the eight parameters on which they have been compared, making this perhaps the closest Face-Off we have had on the site. And the price, which normally would have played a role is not that much of a clincher here. Yes, on the surface the 6 GB/64 GB avatar of the OnePlus 5T seems to have a slight edge when you consider that it is priced at Rs 32,999 as compared to the Rs 34,999 of the Z2 Force (which only has a 6 GB/ 64 GB variant), but then, the Z2 Force has a mod bundled with it and has expandable storage. Yes, the OnePlus 5T has more color variants and an 8 GB/ 128 GB option too, but that is more expensive at Rs 37,999. The price equation is therefore pretty much leveled out.

Which only makes picking a winner even more difficult. Both devices tie on hardware, software, and performance, which form the core of any smartphone choice. Where they do differ are in design, cameras and battery. And this makes picking one of them down to individual preference – a person looking for a more “modern” design and better camera performance would perhaps be attracted to the OnePlus 5T, while someone looking for a high-end phone performing across most parameters and with a sturdy display and endless battery life, would prefer the Z2 Force. We also think that the stock Android on the Moto device, allied with its modularity might appeal more to the geek crowd. Finally, those mods do mean that you can keep adding on to your device for a long time – for some that would mean better value for money.

Whatever your choice, you are unlikely to be disappointed. You would have either never settled for anything but the best or have opted to have the Force with you.

We cannot complain about either scenario.