It has come late to the budget flagship party in India, but the Moto Z2 Force definitely seems to have made an attention-grabbing entry. Unlike its predecessor in the Force series that came to Indian shores almost two years ago (the X Force), this one comes with a sleek frame, a powerful (literally) accessory and most important of all, a price that is tempting rather than terrifying – had it launched at its original price, it would have been a premium rather than budget flagship. The big question, of course, is whether the delay in its arrival (it was unveiled in the US in August 2017) has damaged its prospects in this world of ever-changing tech (and tech reviewer opinions)?

2017 seems to have been a very good year for Motorola in terms of design. The company came out with a very smart and distinct Moto G series, hit a home run with the beautifully crafted Moto X4, and hits the middle ground of these two with the Moto Z2 Force. Seen in isolation, the phone is very sleek and thanks to the round camera unit which sticks out at the back, typically Motorola – that spherical camera is becoming an integral part of the Motorola design language, making all its phones stand out in a very crowded marketplace. The Z2 Force might strike some as being a little old fashioned from the front thanks to its sticking to the 16:9 aspect ratio on its 5.5 inch display (Motorola claims that the ShatterShield technology was not yet ready for the 18:9 aspect ratio) and slightly large bezels, but with its rounded corners, speaker and selfie camera flash above the display and an oval fingerprint scanner beneath it, it still looks smart enough. 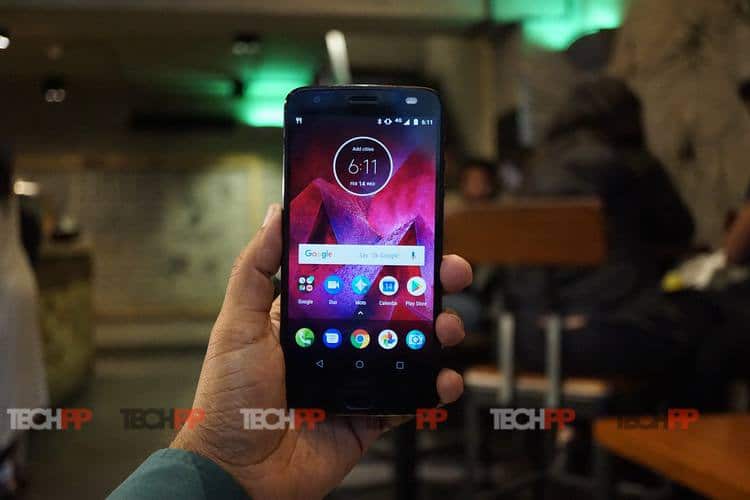 It is the back, however, that really makes it stand out. Made of brushed Aluminium 7000 (used in aircraft, we are told), it has that spherical camera unit at the top and the Moto Mod connector pins in gold at the base, with the Moto logo just below the camera. Yes, it is prone to picking up smudges, but at 6.1 mm in thickness and a mere 143 grams in weight, this is one of the sleekest Android flagships around, and along with the Samsung S8 twins, perhaps the most distinct in terms of appearance. The frame is metal, with volume and power keys (the power key slightly ridged – another Moto tradition we are beginning to love), and USB type C port at the base. The dual SIM (with a hybrid slot for microSD) tray slots in at the top, and the left side is totally bare. Alas, no 3.5 mm audio jack here, although there is an adapter in the box. Finally, the phone is water repellant – so it should be able to survive the odd spell in the rain but dropping it in the water is not recommended. 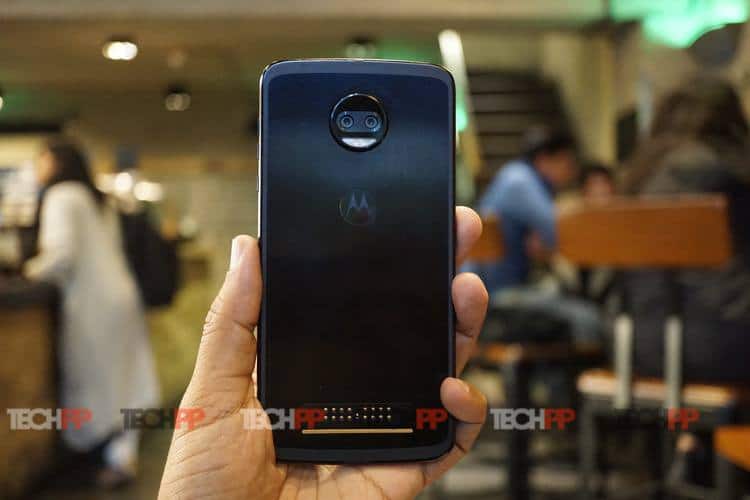 All in all, the Moto Z2 Turbo is a good looking device. No, it will not turn heads like the dazzling Moto X4, but while that one was glassy, this one is classy (we do use that a lot, don’t we? Blame it on Moto’s design team).

Beneath that handsome hood lies some very flagship level hardware. The display is an AMOLED one with a 2560 x 1440 resolution, and as if that were not enough, it comes with Motorola’s ShatterShield technology, which means that it will survive most drops from a height of about 3-5 feet. It is not the sort of the eye-popping AMOLED that you get from the likes of Samsung, but neither is it of the slightly washed out avatar that we saw on the Pixel 2 XL. It handles colors and contrasts well and has good daylight visibility. But with all that shatter-proofiness (if that’s a word) comes with a penchant for being scratched and smudged, so we would recommend some sort of screen protection, not for (oh the irony) protecting the display but for cosmetic reasons. 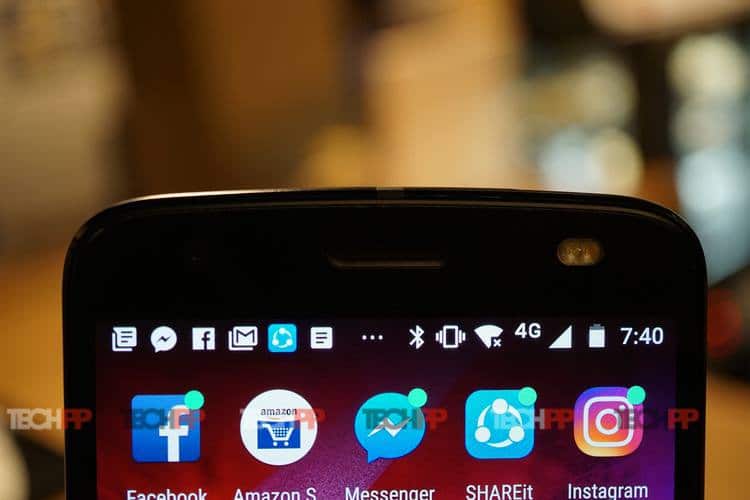 The device is powered by the current flagship darling, the Qualcomm Snapdragon 835 processor, paired with 6 GB of RAM and 64 GB of storage, which can be expanded up to a massive 2 TB (anyone got a memory card of that size, though that’s another story), provided you sacrifice one of the SIM card slots. The cameras on the back are dual 12-megapixel ones, with f/2.0 aperture and 1.25um, with one color sensor and one black and white, the idea being to capture detail as well as throw in some bokeh. On the front is a relatively modest 5.0-megapixel snapper, albeit with a flash. Connectivity options include 4G, Wi-Fi, Bluetooth, GPS, and NFC. The battery, however, seems to have paid the price of that slim frame – it checks in at a modest 2730 mAh, although there is support for TurboPower, Moto’s version of fast charging. Top that all off with Android Oreo (something the phone did not have when it was originally launched in August 2018), and you can see why we think that the Moto Z2 Force pretty much ticks all the Android flagship boxes. 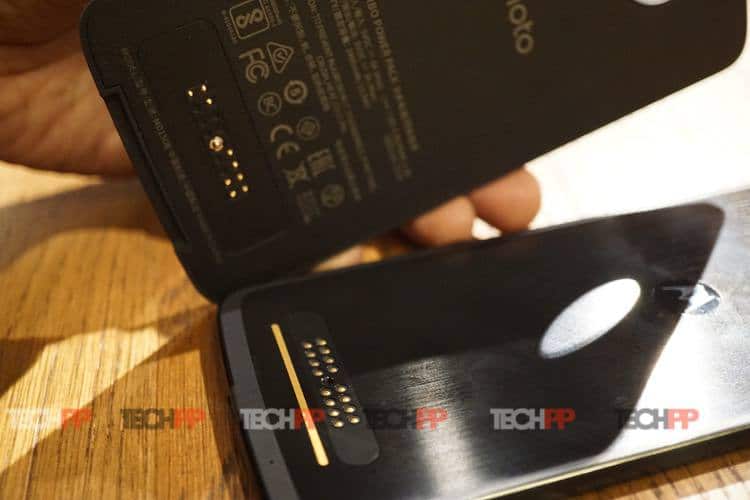 There is, however, a big addition to the Moto Z2 Force in India, and that is the inclusion of a Turbopower Mod to the package. Yes, it does add a fair amount of bulk to the device – at 6.58 mm, it is actually thicker than most of the phone itself is, and at 95 grammes it adds a bit of weight too – but on the flip side, it adds a massive 3490 mAh battery to the device and what’s more, charges at 15W, which makes it as fast as a wall charger. As it can be attached to your device by the magnetic connectors on the back, it really is wireless charging. The mod is well designed with a ridged back with indicator lights showing just how much charge is left (press a button next to them to find out), and while it does make the phone bulky, it also ensures that the camera unit does not protrude (it, in fact, gets quite safely recessed). And well, it makes the device tough on the back too. Moto seems to be betting on getting people to use mods with this one, and at the price at which the device comes, well, it is a good gamble. 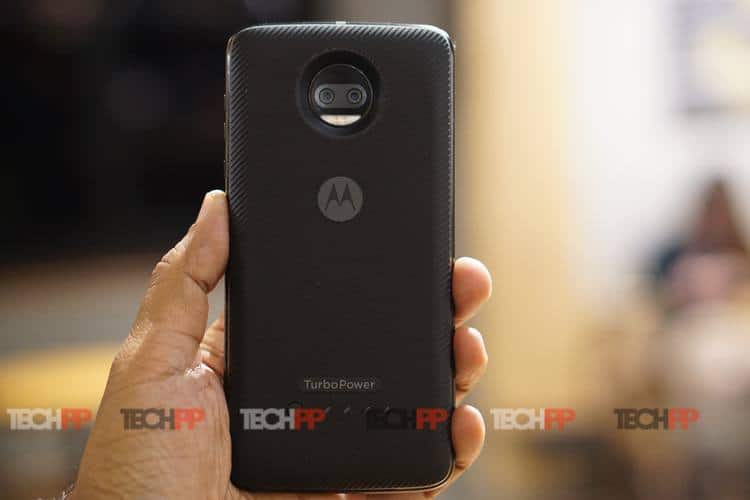 With all those innards, it would be surprising if the Z2 Force turned in anything but a high-end performance. And it does just that. The Z2 Force handled whatever we threw at it with ease, seldom losing its cool. Be it high-end games like the Asphalt series, image editing, browsing social networks or just endlessly browsing the Web while having more than a dozen apps running in the background, the phone handled them all. The display is great for watching videos and playing games and while on the subject, we love the fact that Motorola kept the loudspeaker above the display, allowing for much better sound than if it had been placed on the base or the back. And while the device runs on stock Android in best Moto tradition, Motorola has added its own touches to the interface (also in best Moto tradition). So you can get notifications discreetly on the lock screen, wake up the display for a short while by just waving your hand over it (sensors detect it), ask for information by saying “Show me”, use gestures like twist your wrist to launch the camera, and of course, also get more display real estate by assigning navigation functionality to the fingerprint scanner. It might seem a little overwhelming to Moto newbies, but veterans will love it.

Cameras have been a little bit of a pain point with Motorola, but with the X4, the brand had shown signs of fixing matters. And that continues with the Z2 Force. The dual 12.0-megapixel snappers on the rear will not blow the likes of the Pixel 2 or the iPhone X away but more than hold their own quite comfortably against other budget flagship players like the OnePlus 5T and the Nokia 8. Motorola also has got rid of the slightly laggy photography experience seen in the Moto X4 and the Moto G series. Some of the colors can appear a little faded at times, and there are issues with glare, but details and contrast are generally well handled – in many ways, the cameras remind one of those on the iPhones: steady and realistic rather than spectacular. Not a bad place to be, although we do think low light performance can be improved. Motorola has also added its own bunch of depth editing tricks which let you shift focus to different places, but we do not think they are quite in the league of what we have seen on the Honor devices. The front-facing selfie snapper is adequate enough, although there is no portrait mode, which might disappoint some people. 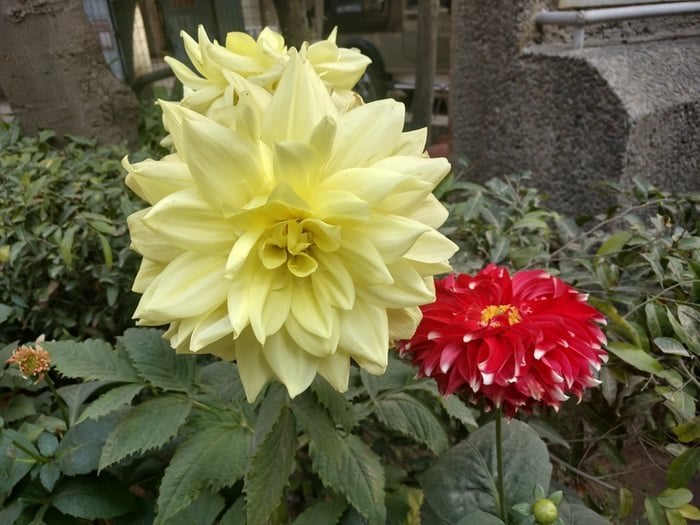 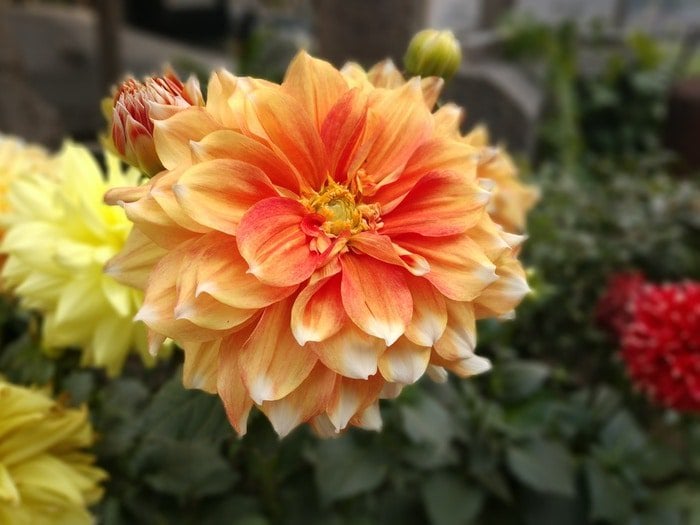 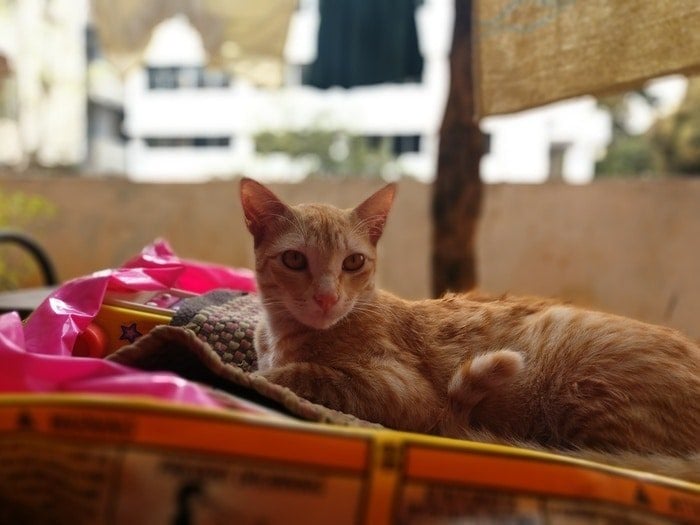 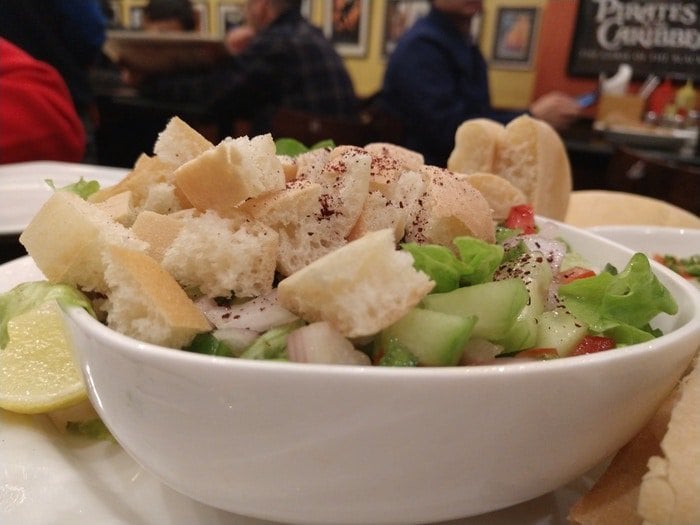 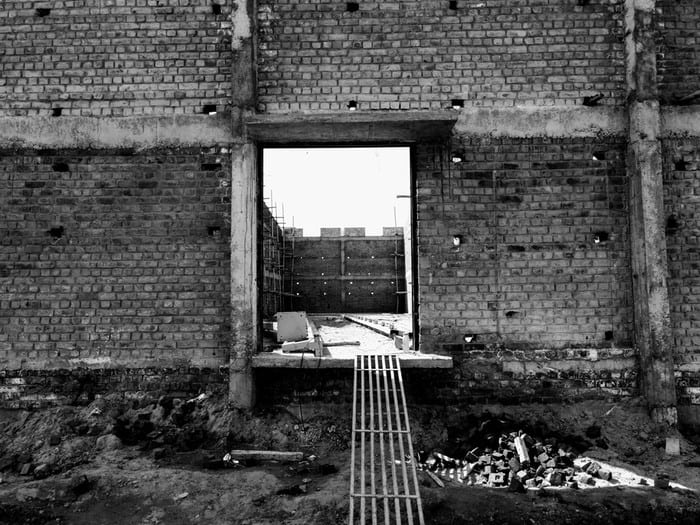 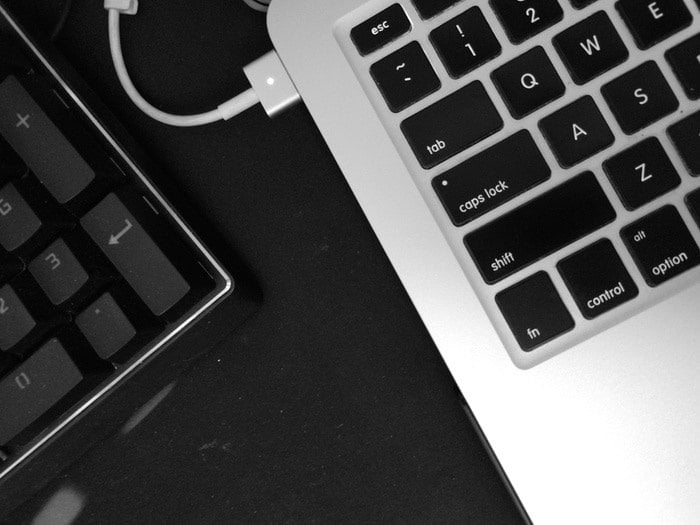 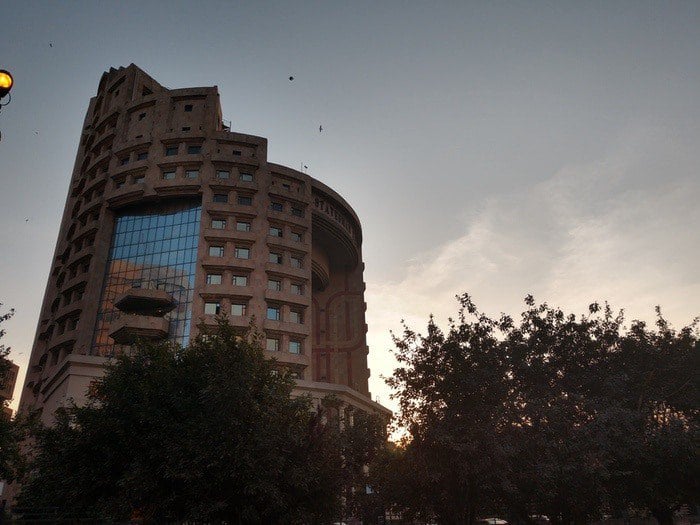 And then there is the matter of the battery. We were very surprised to actually see it manage for almost a day without the TurboPower Mod, but with it, it attains a zone that no other flagship can approach. With the mod on and using the device heavily, we got through to close of three days of usage, the kind of battery life you expect on the more modestly specced Mi Max 2. Yes, we did find the mod bulky, so we often just slapped it on for a short while to get a burst of power and then slipped it back into our bags – a whole lot more convenient than lugging around a power bank with a charger, take our word for it. Of course, this being a Z series phone, you can add other mods to it as well, but honestly, we must confess to being totally addicted to the TurboPower one.

Call quality is very good indeed, and so is audio, over both that loudspeaker as well as headphones. As we said, this is the complete flagship package. 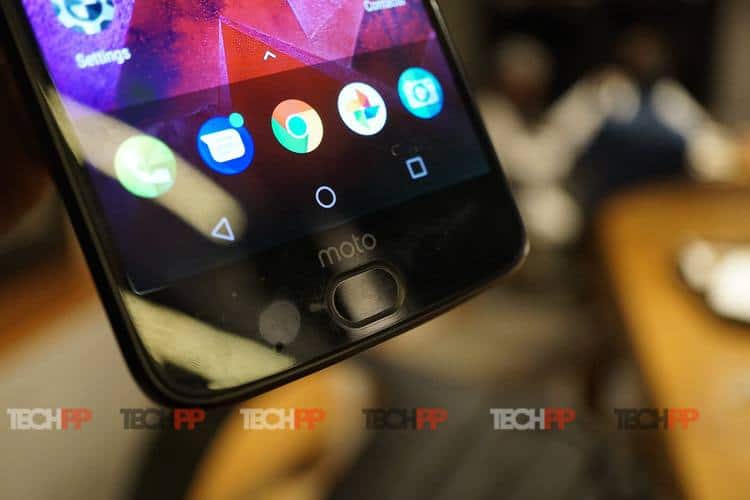 All of which makes the Moto Z2 Force a formidable proposition at its price of Rs 34,999 (well below the USD 700 at which it had been launched in the US). Honestly, apart from the 16:9 aspect ratio of its display (and to a lesser extent, its penchant for picking up scratches), we could not find any major weakness in the device. No, it will not scream for attention, but will just go on and on, performing steadily and smoothly, thanks in no small measure to that TurboPower Mod, which is really a masterstroke. Which is not to say that the Z2 Force faces no competition. It does and some of it is formidable, coming as it does from the likes of the OnePlus 5T, the Mi Mix 2, the Honor View 10 and the Nokia 8 (which recently got a big price cut). How it fares against those worthies will be revealed in the coming days (we have comparisons lined up), but as of now, we can say that although the Moto Z2 Force is a latecomer to the budget flagship party in India, it has arrived bringing in tow memories of the days when flagship devices were built to last. Solid, durable and with the battery that went on and on – them Nokia Communicator feels, anyone?

Yes, it comes to India more than half a year after being launched in the US, but that does not really detract from the value it brings to the table, especially at its price, bundled Moto Mod included.

There is a saying in Urdu:

It could have been written for the Moto Z2 Force in India.

Was this article helpful?
YesNo
TechPP is supported by our audience. We may earn affiliate commissions from buying links on this site.
Read Next
Nothing Phone (1) Review: Nothing like Anything Out There
#Moto #Moto Z2 Force #Motorola #review #Video