There is a new OnePlus in town. What better time to cast a look back at the journey of the brand all the way back to 2014, when it arrived in the country? We could simply walk you through the spec sheets and design details, but that would be so dull. So we decided to do this differently, and make every OnePlus phone a character from the iconic TV series, Friends. The results were interesting. Go on, discover which one of your favorite characters turned out to be which OnePlus device. Or vice versa. And of course, if you don’t agree with our selection, do ping us in the comments section. 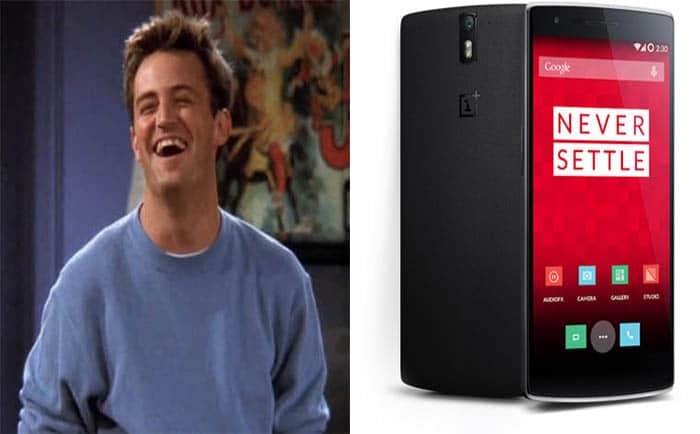 When we talk about setting a tone, we think the OnePlus One did for the OnePlus brand what Chandler Bing did for Friends. Just as Mr Bing remains one of the most quoted characters from the show, the OnePlus One did a very good job in making itself memorable. And both did it with some very smart talking. Yes, Chandler was good looking but what you remembered most were his wit and humor. Similarly, the OnePlus One was very well-specced and came with a great price, but what most people remembered was the talk that preceded it – the whole Never Settle concept. And just as the back of the OnePlus One could be a little itchy (that Sandstone finish), so too could Chandler’s humor irritate. Both, however, are easily the most memorable in the series, and to an extent, define it.

Did not have the last laugh! 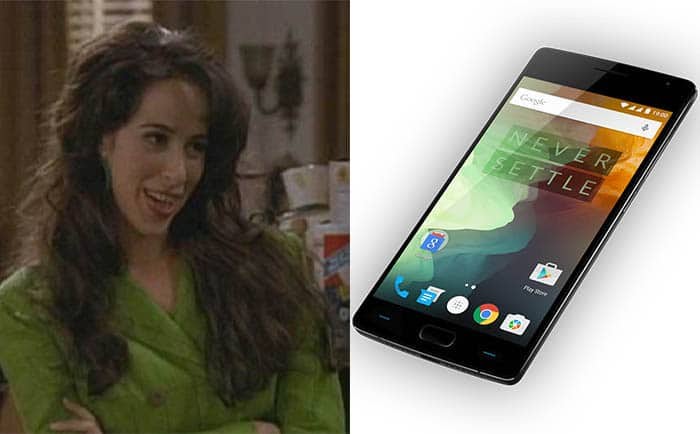 After the success of the OnePlus One, the OnePlus 2 was expected to be another blockbuster. What it turned out to be, however, thanks to problems with Cyanogen (which was used in the OnePlus One) was a well-specced device that was buggy and perhaps the weakest link in the OnePlus chain. A bit like Janice. When she first entered the show, it seemed like she was the one for Chandler and would be there to stay. But just like the OnePlus 2, which could not live up to people’s expectations, Janice did not really fit the role (perhaps that laugh did to her what Cyanogen did to the OnePlus 2 – let it down). 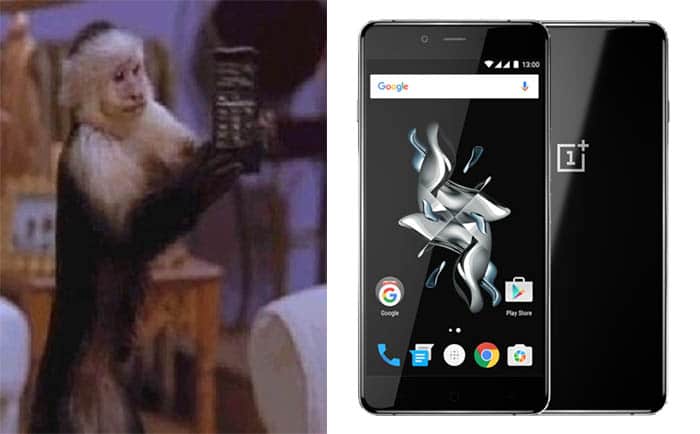 OnePlus X who? Marcel who? Well, this might be the thought that hit you when you saw that heading. But no matter how insignificant these two characters may seem, they were there. Just like Marcel, who had the crowds raving with his cute little face and antics, the OnePlus X wowed the audience with its cute little frame (glass!!) and even cuter price tag (it remains the most affordable OnePlus phone ever). Unfortunately, just being cute or affordable was not enough, and both of them had to bid farewell after relatively short appearances. The only difference: Marcel went away to become a Hollywood star and OnePlus X was consigned to history. 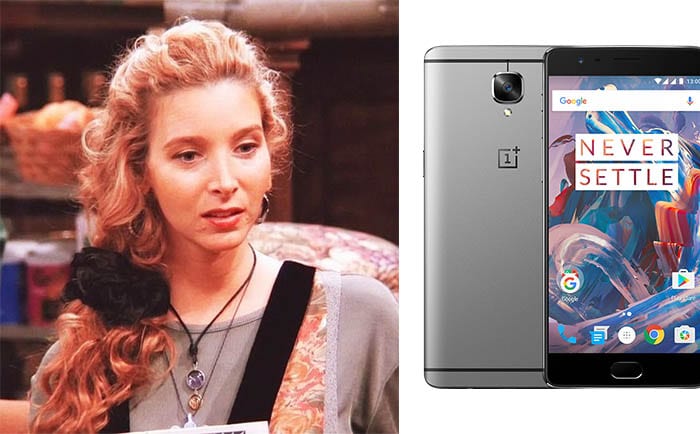 Did anyone predict the OnePlus 3 to be the way it turned out – all metal and glass and no sandstone finished back? Well, that kind of sounds like Phoebe, doesn’t it? Just like the OnePlus 3 which surprised everyone with its looks, Phoebe left no stone unturned when it came to surprises. Convention and stereotyping went out of the window. Just like the OnePlus 3 which had all the insides in the right place, for all her quirks and eccentricities, Phoebe did have a heart of gold. Just like Phoebe, OnePlus 3 might not be the most remembered of its series, but the fact is that by being different, it actually made the brand stand out from the competition – something that was important after the OnePlus X and the OnePlus 2’s relative disappointments. 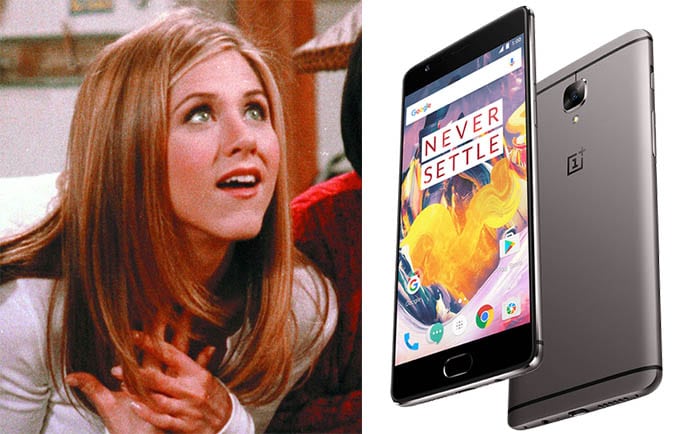 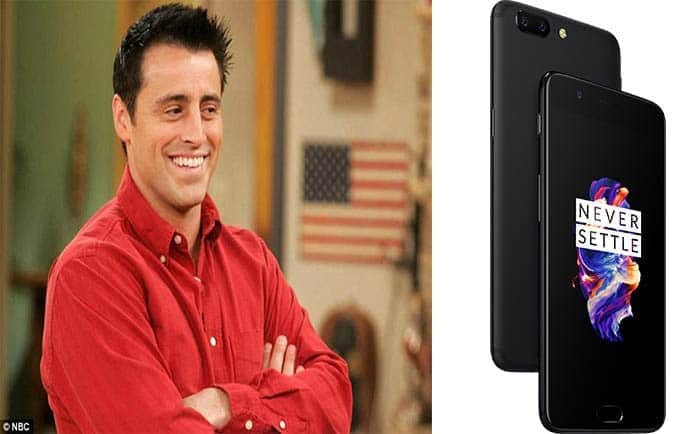 Sleek smooth and a hit with the ladies, that was Joey in Friends. And that really was the OnePlus 5 – although its appeal extended to everyone, and was not just restricted to ladies. Yes, he fit the good-looking star stereotype just like the OnePlus 5 fit the premium phone stereotype – so much so that some accused it of being like the iPhone. But just as there was more to Joey than the charming, at times even seemingly dumb character, there was much more to the OnePlus 5 than just its smooth appearance and the dual cameras that it pushed. Just like Joey, the OnePlus 5 was a performer, without a doubt. And just like Joey was after Rachel briefly, the OnePlus 5 came after the 3T. Coincidence? 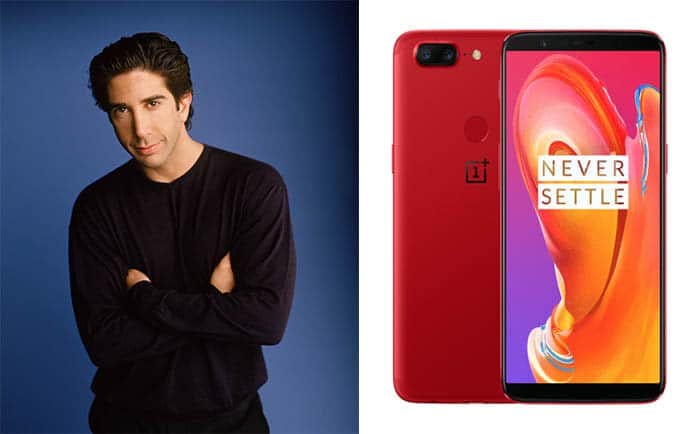 Ross was all about getting all the boxes ticked, and getting things off his checklist. And so was the OnePlus 5T. As the world was going 18:9 aspect ratio paired with dual cameras, OnePlus did too. Just as Ross tried to cover all the bases – a stable job, marriage, kids – so too did the OnePlus 5T, trying to pack in everything that people expected in a high-end smartphone – a tall display, a powerful processor and dual cameras, along with other features. He seemed the most settled and sorted off the lot, just like the 5T which was a very settling option for a lot of people, notwithstanding the Never Settle tagline. 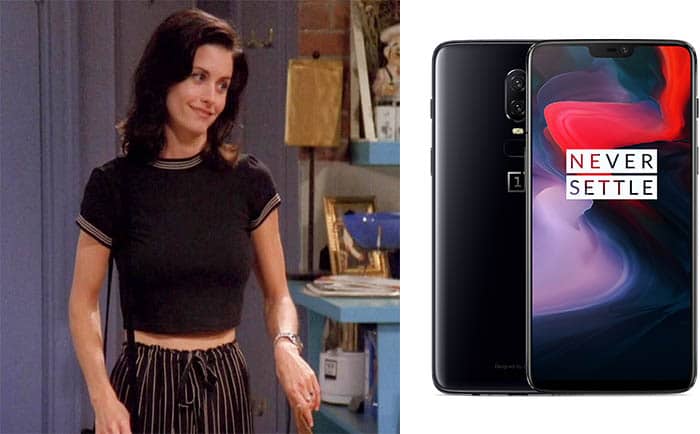 A lot of people considered Rachel to be the lady face of Friends, but we think it actually was Monica. Just like the OnePlus 6, that does not only look good with its new glass back and different dual camera placement, but also comes with some of the strongest specs in the market, Monica backs up her very good looks with a lot of brute strength. She may appear petite and delicate but she is freakishly strong and when the time came, she could kick anyone’s butt. She was as obsessive about detail and cleaning as the OnePlus 6’s design team seems to have been about the device, which sure has one of the smoothest finishes we have seen.

(Nimish Dubey contributed to this article)

Was this article helpful?
YesNo
TechPP is supported by our audience. We may earn affiliate commissions from buying links on this site.
Read Next
OnePlus Nord Watch vs Amazfit GTS 2 Mini New Version: Which One Should You Buy?
#oneplus #OnePlus 6 #tech humor