When Qualcomm launched its Snapdragon 660 Mobile Platform to cater to the upper mid-range mobile phone market, it got all of us excited to know what it brings to the table since it didn’t seem to look like just another 600 series chip. The spec sheet surely gave us high hopes regarding its raw performance and rightfully so, it felt like Qualcomm had bridged the gap between budget/mid-range devices and flagships with the 660 mobile platform. However, it wasn’t very well received by OEMs, seemingly because of the perception of end consumers.

Qualcomm has now announced a new 700 series lineup of chipsets with premium specs to overcome the inferiority complex in consumers’ minds regarding the 600 series when compared to its flagship 800 series processors, despite the 660 being a strong contender. So let’s take a look at the key differences and see how the new Qualcomm Snapdragon 710 fares, when compared with the Snapdragon 660 mobile platform and how far is it from matching the performance of the flagship Snapdragon 845.

The first major difference comes in the form of the all-new raging subject to talk about in 2018, AI. Qualcomm claims to have used an advanced AI engine along with the support for Snapdragon Neural Processing (NPE) SDK and Hexagon Neural Network to achieve up to 2x overall improvement in terms of AI performance compared to its previous gen chipsets. The AI will assist with the camera, sound, security and gaming aspects of the device in conjunction with the Hexagon 685 DSP, the Adreno 616 GPU and the Kryo 360 cores on board.

The 660, on the other hand, did not come with a dedicated focus on AI, but instead went with on-device machine learning capabilities.

The GPU goes hand in hand with the CPU and the 710 comes equipped with the new Adreno 616 GPU which promises up to a whopping 35% improvement in graphical performance and 4K HDR playback when compared to the 660 which came equipped with the Adreno 512.

Image processing is also an area where the 710 seems to push ahead of the 660. The new Qualcomm Spectra 250 ISP claims to capture more vibrant photos and videos, thanks to its updated architecture. Also, 4K UHD video recording is supposed to consume 40% less power when compared to the older Spectra 160 ISP on the 660. There’s also support for multi-frame noise reduction with accelerated image stabilization.

There’s also a newer Hexagon 685 DSP which results in a smarter camera, voice and gaming experience based on Qualcomm’s 3rd Gen Hexagon Vector Extensions (HVX) versus the 2nd Gen implementation on the 680 DSP present in the 660.

Here is a table comparing the 660, 710 and the 845 side by side complementing the fact that with the 710, Qualcomm is getting closer to flagship grade mobile platforms even for mid-range devices. 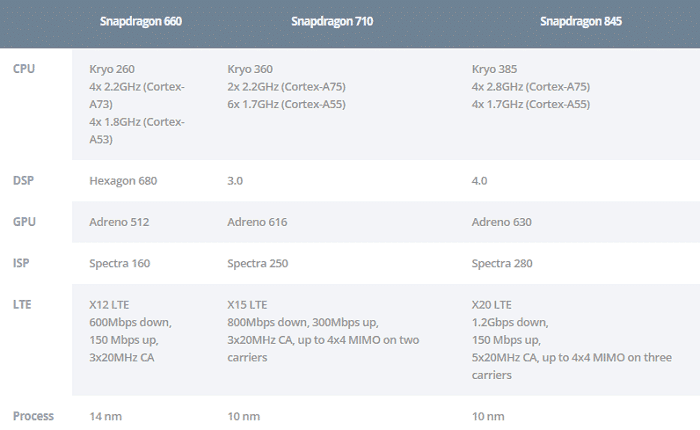 The Snapdragon 660, even with all the power that it had to offer, was used only by a handful of OEMs which was a shame given its capabilities. However, with the launch of a completely new 700 series lineup, Qualcomm aims to change the way consumers look at higher mid-range phones by providing flagship-level performance as well as features like dedicated AI engines and faster modems without much compromise.

Was this article helpful?
YesNo
Photo Credits: Android Authority
TechPP is supported by our audience. We may earn affiliate commissions from buying links on this site.
Read Next
Google Pixel 6a Vs Nothing Phone (1): How Do They Compare?
#comparison #qualcomm #Snapdragon 660 #Snapdragon 710