Blame Apple. As ever so often. Towards the end of 2016, Bluetooth earbuds existed but were generally bonded to each other by a wire or some other material. Wireless connectivity referred to the absence of wires between a device and earphones. Enter the Apple AirPods, and suddenly even wires between the earphones became an issue. And we entered the era of what people now call “true” wireless earphones, with no wires whatsoever while in use. Of course, everyone blamed Apple. And targeted the AirPods with rival products too. 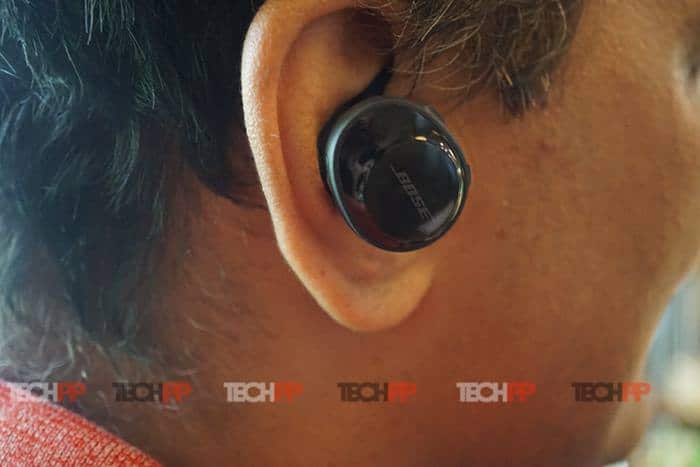 And perhaps the most high-profile competitors to the AirPods comes from one of the biggest names in the audio business, Bose. The company has already a formidable track record in the Bluetooth audio business (there are many who swear by the QC 35) and now has decided to dump wires totally too with the SoundSport Free earbuds. And we would like to alert you that there will be AirPod references aplenty in this review, simply because that is the rival (some would even say “benchmark”) the SoundSport Free goes up against, notwithstanding some very good efforts from the likes of Sony, Jabra, Motorola and a few others.

On first glance, the SoundSport Free earbuds look…well, big. They are not heavy – a mere 15 grammes each, and are built on solid lines. But they are not meant to be invisible on blend in – nope, these are going to stick out from your ears, making you look a trifle robotic. Each earbud is slightly spherical in shape with Bose branding on the outside of each, and a “fin” (or a wing) sticking out of it to keep it firmly in place in your ear, by attaching to the inner ridges of your ear. It might not be as minimalistic as the AirPods, but hey, it works. The earbuds do not enter your ears very deeply, but thanks to the well-designed fin, no matter how much we shook our heads or ran or walked, the SoundSport Free earbuds stayed firmly in place. 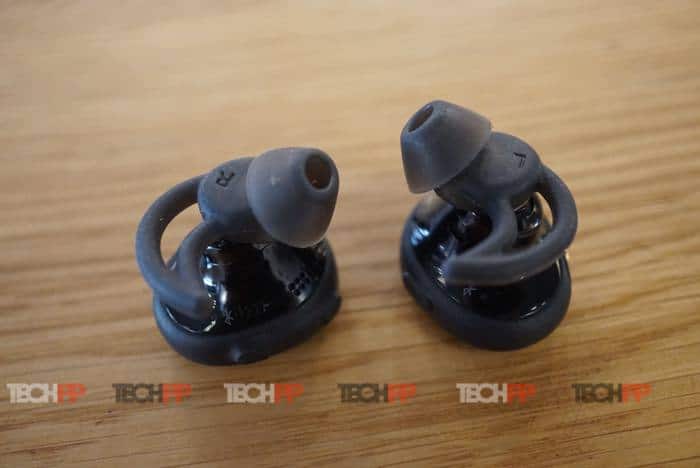 The surface of the earbuds themselves are very crowded. There are charging contact points in small arcs on both earbuds. That’s not all – there is a connectivity button on the left earbud and buttons for increasing and decreasing the volume as well as a multi-function single button between them for taking and ending calls as well as playing, pausing and skipping tracks. The buttons are hard to press and are on the rather narrow sides of the earbuds – reaching them and using them can take some getting used to. Pretty clustered, we would say, especially when you consider the totally button-less looks of the AirPods.

That said, we did not attract too many “what the heck is sticking out of their ears” looks when wearing the SoundSport Free. Do they look better than the AirPods? That is really a matter of one’s aesthetic preferences, but we would say they look more distinct and even slightly classy – we had the black model – unlike the AirPods which look exactly like EarPods minus the wires and notwithstanding all their popularity, still look quirky. They have an IPX4 rating, which means they can take the odd splash of water, and can be worn during a workout, but do not even dream of jumping into a pool with them.

Easy to charge, easy to pair 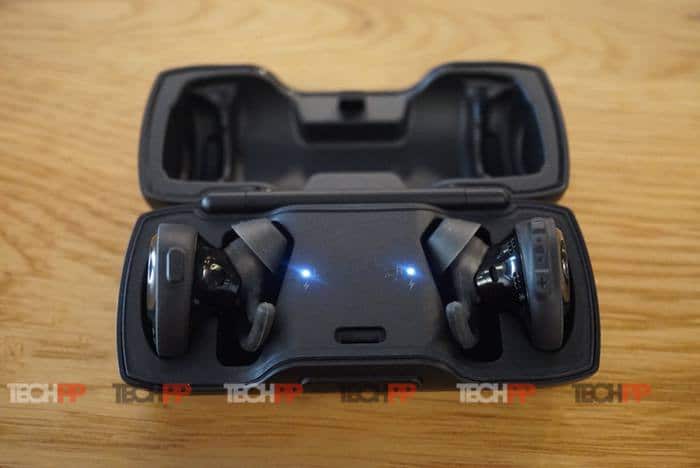 The SoundSport Free earbuds also come with a charging-cum-carrying box, a la the AirPods. And while it is not large and will slip into most pockets and bags with ease, it is considerably more bulky than the “floss container” white AirPod case. Pressing the large button outside lightly shows just how much charge is left in the case – there are five lights there. Press the button harder and the case springs open to show the places where the earbuds have to be placed. The earbuds have to placed exactly in the right location with their charging contact points falling on those on the case – fortunately, the case has been designed to ensure that you do not accidentally place the right earbud in the area meant for the left one, and vice versa – there is a LED light next to each earbud slot which glows a solid white to indicate they are totally charged. Once again, it is not as minimalistic and simple a solution as the “drop them in and charge them” one on the AirPods, but one does get used to matters with the passage of time.

Pairing the earbuds with your iOS or Android device is as easy as switching on Bluetooth, holding down the button on the left airbud. There is a companion app too, but you can connect through the Bluetooth setting panel on your phone as well. You can connect to more than one device but only one at a time. The SoundSport Free announces the device it is connecting to, which can be helpful, especially if there are multiple devices around.

The sound? Heck, it is Bose! 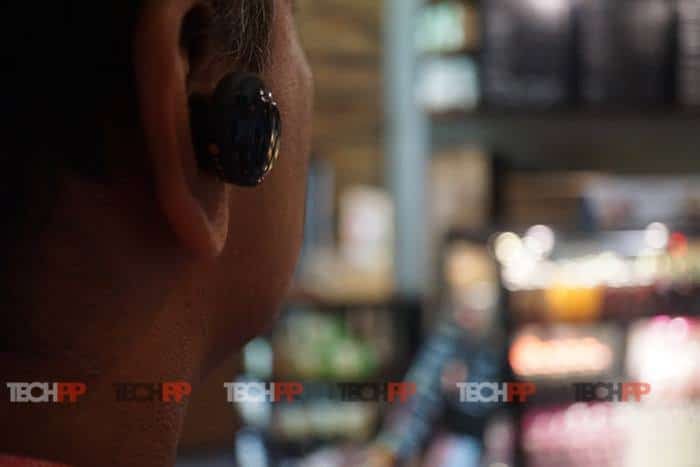 Which of course, brings us to the actual audio experience on the SoundSport Free. And well, we can safely say that these earbuds produce the best sound we have seen in “truly” wireless earphones. Those seeking booming bass will be disappointed, as the SoundSport free do deliver decent bass but never let it overwhelm you, which in our opinion, is the way bass (or any other note) should be. The “traditional” Bose sound is typically a bit on the softer side but is outstandingly clear, and this is where the SoundSport Free score heavily – those loving jazz, country and classic rock will particularly love them, although dance floor maniacs might holler for more “punchy” bass.

Some audiophiles will hem and haw about the lack of sharpness in some areas, but if what you are seeking is a plain pleasant listening experience, these earbuds more than deliver just that – the sound is wonderfully well-balanced and clarity is exceptional. No, they do not really fit deeply into your ear and there is no active noise cancellation either, so external sounds are not “sealed” out or cancelled out, but we do not really mind that. Sound generally does not leak out unless you are playing something very percussion laden at the top volume. And before you ask, no, there is no distortion at any volume – the clarity of sound is top class. Better than the AirPods? Easily. 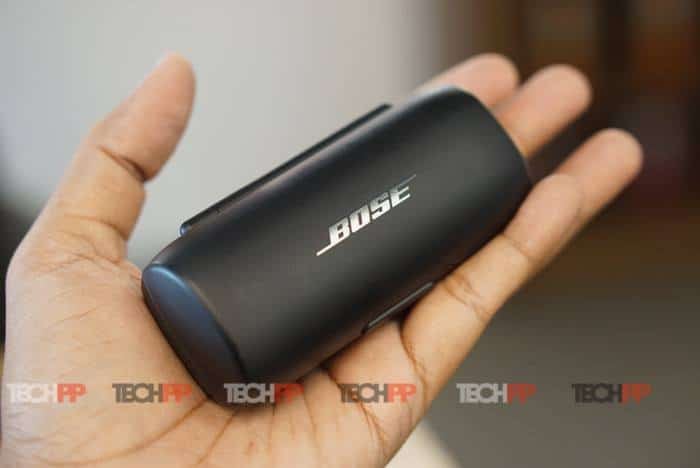 The earbuds also stayed in our ears without any trouble, although fiddling with the volume and the pause/play button was a bit of a pain because the buttons are so stiff. Battery life is very good too. The SoundSport Free easily last the advertised five hours on a single charge claim and often went a little beyond that too. The case can charge batteries twice completely – the earbuds take about two hours to charge in the case, and the case itself takes two hours as well. And long-pressing the multi-function button activates Google Assistant on Android and Siri on iOS – once again, we just wish that button had been softer, though. There is no switching off of the earbuds – just putting them inside the case disconnects them from the device and puts them in charge mode. And while Bose’s companion software does not add much to the experience (apart from providing a handy tutorial and a slightly different visual), we would recommend downloading it just for the regular updates that the company keeps serving up. It also makes connecting the earbuds to a device look relatively cool, with the option to just drag an image of the earbuds downwards – that said, it is moody and we would recommend using the more boring Bluetooth settings instead.

There are a few eccentricities though. When viewing a video on YouTube in a Web browser, we often found a slight lag between the picture and the audio on the earbuds. There were also occasions when one of the earbuds would stop working momentarily – only momentarily though. The charging prowess of the case is also a bit eccentric – we sometimes felt that it ran out of charge a little too early – but that could be just us having problems keeping tabs, as we do not exactly know the charge level left in the case. Handling calls was a smooth process, once we got the hang of the location of the multi-function button, although call quality was just a notch below that of the AirPods. We must also confess to having expected just a little more juice out of the charging case, considering how much bigger it is than the AirPods one, which serves up 4-5 recharges. Switching between devices also was sometimes erratic – we sometimes had to switch off Bluetooth on one device before being able to connect the SoundSport Free to another one. And while we do like the water resistance, it would have been nice if the earbuds had also got some more sensors, like a step counter or a heart rate sensor, given the “Sport” tag attached to them and the fact that some of their competitors (not the AirPods though) have these features built into them – the Jabra Elite Sport, most notably.

“Sound”ing alarm bells for the AirPods? 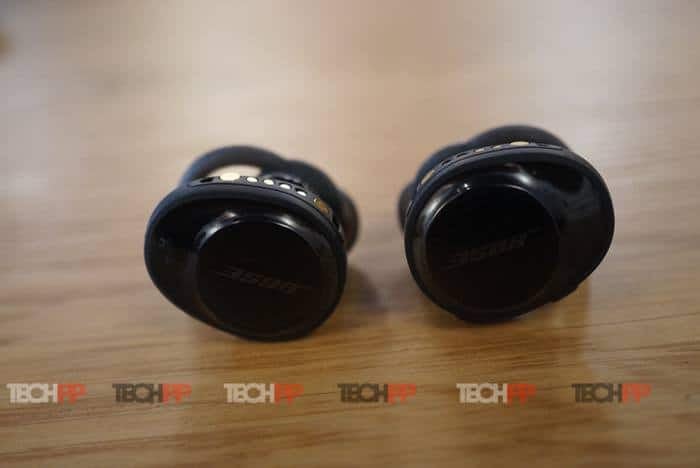 At Rs 18,990, the Bose SoundSport Free Truly Wireless headphones are actually significantly more expensive than Apple’s AirPods that come at Rs 12,999. Are they a better investment? Well, if you are chasing sound quality above everything else in a “truly” wireless form factor, we guess they are a very good option. They might not possess noise cancellation but they more than compensate with that typically soft and yet surprisingly clear sound that is the Bose trademark. Where they come undone in comparison with the AirPods however, is in terms of the sheer ease of use and compact form factor that Apple’s earbuds have, and in battery life as well. The perfect pair of earbuds would perhaps have the audio quality of the SoundSport Free and the ease of use of the AirPods, but while we wait for those to come along, the SoundSport Free pretty much take on and beat all comers in the one department that make Bose an iconic brand.

Was this article helpful?
YesNo
TechPP is supported by our audience. We may earn affiliate commissions from buying links on this site.
Read Next
Skullcandy Mod Review: Betting on doing the basics well
#Airpods #Bose #Bose SoundSport #Bose SoundSport Free #review #Wireless Earphones