The four-year wait is finally over. The 2018 FIFA World Cup kicks off today in Russia with the home team facing Saudi Arabia in the first match. And like always, Google seems to be at the forefront by introducing features for you to follow along. The company, in addition to its search engine, has also updated its new News app which brings I feel is one of the most thoughtfully designed, yet simple interfaces for keeping track of your favorite teams. 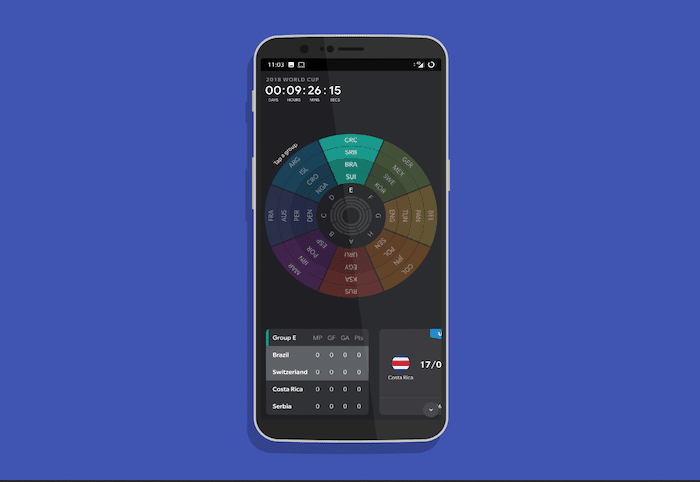 On the homepage of the new, dedicated tab for the World Cup on Google News, you’ll find a clever wheel which you can be swiveled to the group your team resides in. There’s a countdown at the top to the first match which I’m assuming will disappear once the tournament begins. Anyway, once you’ve selected the group, the app will pull up its leaderboard underneath the wheel followed by the upcoming matches right next to it.

You can either scroll through the next fixtures or swipe up to reveal the “Teams” page. Here, you can access details and scores for a specific team instead of the group. The app neatly shows you a timeline of the team’s forthcoming matches and position. To view more information for a particular fixture, there’s a “More details” option below every card. Tapping that will take you the Google Search where everything from the highlights to the lineup to the live text updates is available. Although it would have been much better if Google had included everything inside the News app, at least the rosters. 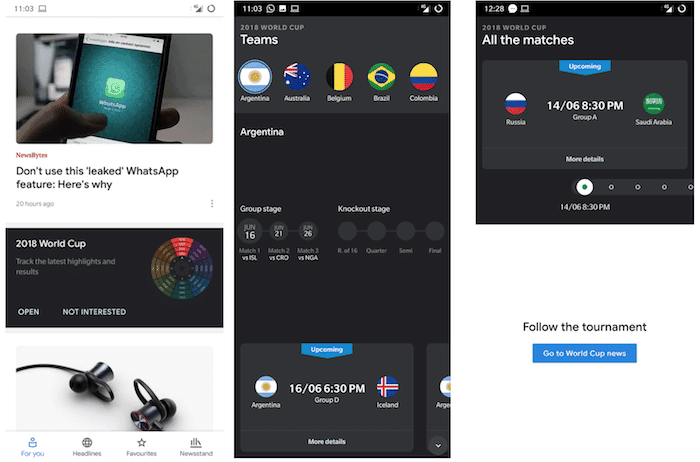 Lastly, another swipe up will bring up the “All the matches” screen which, as the name suggests, lets you access all the matches through a horizontal carousel. Of course, you can just search on Google instead of firing up the News app but it’s a little more cumbersome to navigate around. On the Google News app, everything is just a couple of swipes away from you. Google had announced a plethora of features for the 2018 World Cup including a user comments tab, live insights, and even the ability to add a floating window displaying the scores in real-time for a match on Android.

For downloading the Google News app, head over to this link for Android and this for iOS. The card for launching the World Cup tab should be present on the homepage. Did I mention it now has a dark theme?

Reliance Jio makes all local voice calls free following…
How to Watch ICC Cricket World Cup Online in India, US, UK…
Explore the world with Google StreetView: Click, Drag and…
Google Gets Serious about Wearables; Buys Fitbit for $2.1…
The Pixel 5 on Snapdragon 765G is great news for Android
Conversion.ai Acquiring Headlime is Bad News for Headlime…