The present day Google Assistant took a lot of refinement and polishing to get to the level that it is on now. Speaking about now, Google Now was Google’s answer to Apple’s Siri at a point of time, except for it wasn’t as intuitive. It offered a card based UI with suggestions and information related to your calendar events, local weather, navigation etc. with more emphasis on your Google Now cards rather than on voice-based assistance. With time, Google Now metamorphosed into more of a smart assistant you could have a conversation with, along with a personalized “feed”, which was a welcome move compared to just a pane with multiple cards. However, Google wants you to take a trip down the memory lane with its new “Visual Snapshot” UI update rolling out for Google Assistant. 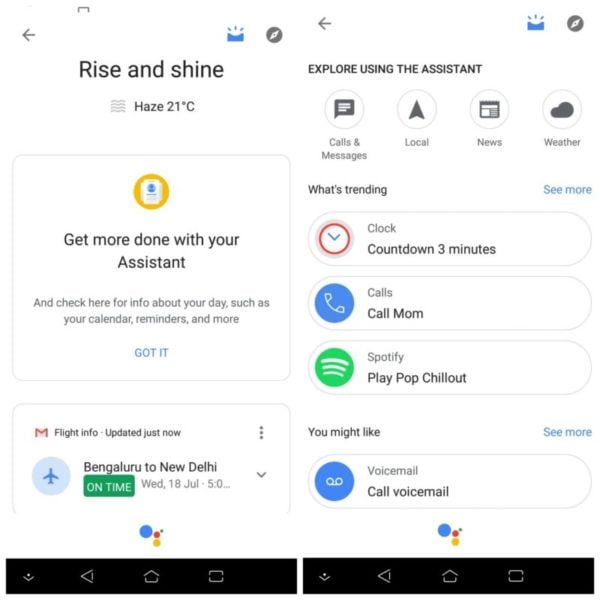 The Visual Snapshot UI looks very similar to what Google Now used to offer back in the day. It contains proactive suggestions with personalized and timely information related to your commute, upcoming events, recent online purchases, and much more. You can access the new (or old, depending on whether you’ve used Google Now) overview page by tapping the icon on the top right corner of your screen when you launch the Google Assistant. Just like with Google Now, apps will start displaying their own cards and relevant information as and when you keep using them. For example, you might see scores of your favorite sports team, or your grocery shopping list from Google Keep, and also get a heads up about the status of a package you ordered. This seems like Google Now has been merged with Google Assistant, and nobody should really mind the combo of the two.

Google is rolling out this update to all Google Assistant users on Android and iOS starting this week. It’s probably a move to get users to use the Google Assistant more often than it is used now, to show what it is capable of and how it can aid in one’s day-to-day life.

Evanesco! How to use Google Pixel’s Magic Eraser to make things vanish ...
Read Next
Source: XDA-Developers

Google introduces People Cards: Virtual visiting cards on…
DS, RAZR, Communicator: The Three Dual-display Mobile…
You Can Now Install Google Recorder with Live Transcribe on…
How to use Back Tap on iOS 14 to launch Google Assistant (or…
Mi A3 Review: Android One Step Forward, Mi One Step Back
Could Realme Bring the Android Tablet Back from the Dead…