They are known as arch enemies. And have never been shy of taking pot shots at each other. Their battlefields have not been restricted to the marketplace, but have extended to courtrooms, advertisements and different media.

Those two are supposed to be on as good terms as Real Madrid and Barcelona, in football terms. Or Iran and Israel, in political ones. Each claims to be not just a rival but an ideological superior to the other. It is not just about market share, but about values and indeed, at some level, life itself. 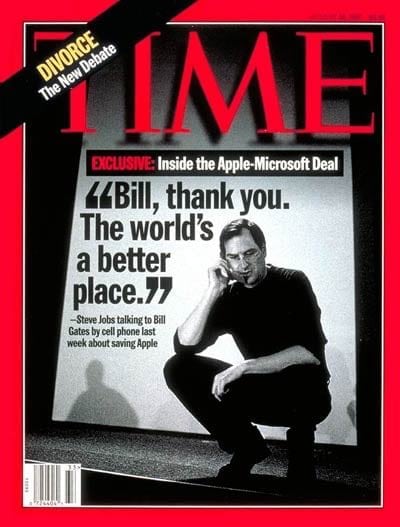 And yet, it is these two companies that provide us with perhaps the best Friendship Day story in the world of technology.

The year was 1997. Apple was knee deep in trouble. The company’s products were failing. Its market share was negligible. Executives were coming and going as if through revolving doors. And frankly, not too many gave the company a chance of surviving. Michael Dell is believed to have famously remarked that the only thing to do with Apple was to sell the company and give the money to its shareholders – the stock incidentally was close to a twelve year low.

Steve Jobs, one of the founders of the company, was recalled in an attempt to change its fortunes. But even he realised that it was an uphill task. There were too many products and software was a big issue. He started streamlining the product portfolio, but he needed time. And money. And guess who stepped in to help?

When the attendees of the Macworld conference in Boston saw Steve Jobs step on stage, they did not expect him to announce that Apple would benefit from a 150 million USD investment from Microsoft. Indeed, when Jobs started speaking to Gates on satellite, such was the hostility in the audience that boos broke out and continued for a while. An unfazed Jobs, however, carried on and famously thanked Gates for his help, saying, “Bill, thank you. The world’s a better place.” For many Apple faithful, it was almost like betrayal. After all, Gates and Jobs were bitter rivals, and had never made any bones of not liking each other’s brands. Many also believed that Jobs had “sold out” to Microsoft as Apple on its part withdrew a court case in which it had accused Microsoft of copying its operating system. So surprised was the world that the image of Jobs calling Gates and thanking him actually made the cover of Time magazine!

But what many did not know was that beneath all that rivalry between the two men lay a lot of mutual respect. Jobs would later remember the decision to seek help from Microsoft – incidentally while sharing the stage with Gates and Walt Mossberg and Kara Swisher at the D5 Tech conference in 2007 – and say:

“What was really clear was that if the game was a zero-sum game where for Apple to win, Microsoft had to lose, then Apple was going to lose. There were too many people at Apple and in the Apple ecosystem playing [that] game. And it was clear that you didn’t have to play that game, because Apple wasn’t going to beat Microsoft.

“Microsoft was the biggest software developer outside of Apple developing for the Mac. So it was just crazy what was happening at that time. And Apple was very weak and so I called Bill up and we tried to patch things up.”

They sure did patch things up. Microsoft continued making software for Apple, and Gates for his part felt it was a good decision as well to help out his rival:

“In fact, every couple years or so, there’s been something new that we’ve been able to do on the Mac and it’s been a great business for us.”

The rest, of course, is history. 1997 would see Apple start its comeback path with the iMac, consolidate its recovery with the iPod some years later, and then ride high on the success of the iPhone to become the world’s first trillion Dollar company.

But would the trillion dollar goal have been achieved without the 150 million from Microsoft in 1997? We will never know. But what we do know is that if a friend in need is a friend indeed then perhaps Apple in 1997 had few friends who were closer than the man at the helm of its biggest rival.

In many ways, what Jobs and Gates in 1997 reflected a spirit that was Olympian, one in which competing and doing one’s best was more important than defeating someone else. As so memorably encapsulated in the script of a famous Olympic video:

“You are my adversary,
But you are not my enemy.
For your resistance gives me strength,
Your will gives me courage,
Your spirit ennobles me.
And though I aim to defeat you,
Should I succeed, I will not humiliate you.
Instead, I will honor you.
For without you, I am a lesser person.”

As Jobs would later say:

“Apple didn’t have to beat Microsoft. Apple had to remember who Apple was.”

It did.
With a little help from its greatest adversary.
Or should we say, friend?

You can see Jobs’ famous phone call to Gates here

Was this article helpful?
YesNo
TechPP is supported by our audience. We may earn affiliate commissions from buying links on this site.
Read Next
How to Change Your AirDrop Name on iPhone, iPad and Mac [2023]
#apple #Believe Tech or Not #bill gates #microsoft #Steve Jobs