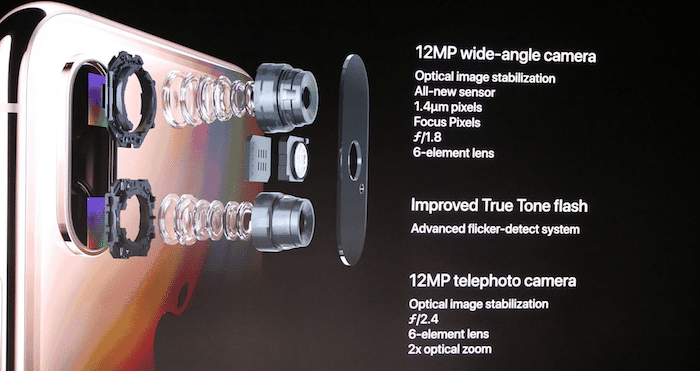 Let’s begin with the specifications. Both of them have the same hardware, unlike last year where technically all the three iPhones had different camera arrangements. On the rear this year, there are two 12-megapixel snappers — one regular wide-angle f/1.7 lens and another telephoto f/2.4 shooter for enabling 2x optical zoom. Optical Image Stabilization is present on both but the former of those has a new sensor with a pixel size of 1.4µm. For selfies, you have a 7-megapixel camera with an aperture of f/2.2 and an upgraded, faster sensor.

There’s also a new Image Signal Processor which is responsible for how quickly the raw images captured by the lenses are processed and ready for social media. Thanks to that, the iPhone XS and iPhone XS Max are capable of performing a trillion operations on every photo you take.

Why does that matter?

For starters, it powers a new mode called Smart HDR. In addition to helping you take better shots of moving objects, the camera app captures four frames with about zero shutter lag for improving the shadows and highlights in your final picture.

Moreover, you can adjust the depth-of-field on the Portrait Mode before or after you’ve clicked the scene. As for videos, there’s now a quicker sensor and the ability to record stereo sound so your clips have that wider soundstage.

The pictures shared by Apple did look impressive but of course, we will have wait for reviews and real-world tests to see how well the new iPhones perform. Google will be introducing its third-generation Pixel phones next month too which will remain a huge challenge for the iPhone XS pair to overcome.

Was this article helpful?
YesNo
TechPP is supported by our audience. We may earn affiliate commissions from buying links on this site.
Read Next
Alert! You’re Hiding Sensitive Information From Your Images on iPhone W...
#apple #Apple iPhone XS #Apple iPhone XS Max