At its forthcoming annual hardware event, Google is expected to announce a flurry of products it’s been working on over the past year. While the Pixel phones have been hogging the spotlight for the past few weeks, today we might have our first look at the company’s first-party smart display called the Google Home Hub. 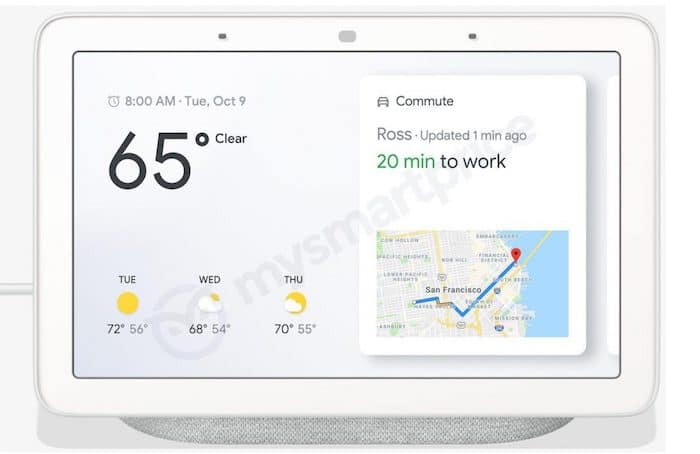 As per an exclusive report by MySmartPrice, the Google Home Hub will have a 7-inch touchscreen mounted to a giant speaker base which is reminiscent of the Google Home Max, albeit a tad less powerful. The device will feature the same software we’ve seen a bunch of recent Google Assistant powered smart displays such as the Lenovo Smart Display.

Google Assistant on smart displays is based on the Google’s Android Things IoT platform and isn’t just an Android tablet slapped between speakers. Because of that, it has a dedicated interface which shows your query results through cards like a lot of other Google products. The home screen simply consists of suggested content Assistant thinks you might be interested such as the traffic, weather, what have you. You can talk to it by saying “Hey, Google” and swipe right on the display to manually go back. In addition to that, it packs all the usual voice assistant features such as pulling up weather details, pictures and videos from Google Photos, controlling your smart home, Nest security camera integrations, guiding you through food recipes, directions, et cetera.

Other hardware features of the Google Home Hub include a physical mute switch, 5GHz WiFi compatibility, and Bluetooth. Ambient light sensors are available as well which will allow the display to automatically adjust its brightness. The report mentions that a webcam seems to be absent which is rather odd since one of the major use cases of smart displays is to video conferencing devices for homes. Similar products such as the Amazon Echo Show or even the Lenovo Smart Display feature front cameras to enable hands-free video calls.

The Google Home Hub is officially expected to be unveiled later next month on October 9th at Google’s yearly hardware event. In addition to that, the company will be showcasing its 2018 flagship phones, second-generation Pixel Buds, a pair of new Chromebooks, and more.

Was this article helpful?
YesNo
TechPP is supported by our audience. We may earn affiliate commissions from buying links on this site.
Read Next
How to Fix Google Chrome Translate Not Working
#google #Google Home Hub