Amazon’s audiobook service, Audible, is quite popular in Western markets like the US but was not available in India up until today. Amazon India has finally launched a new audiobook service in the country for a monthly subscription fee of Rs. 199, along with a 30-day free trial. When you sign up for the first time, some users are reporting up to 3 months of the free trial along with free credits to purchase up to 3 audiobooks for free. 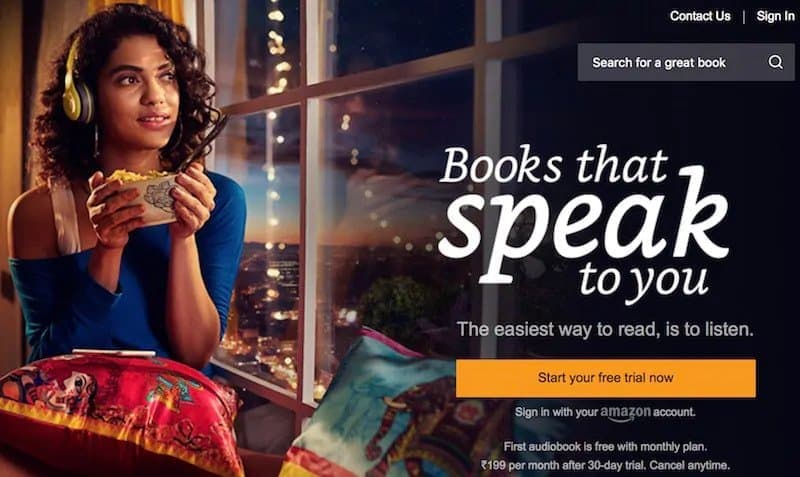 Users who subscribe to the Audible service will be entitled to choose to listen to over 2 Lakh audiobooks, according to the company, right from their smartphone by downloading the app on their Android or iOS device. While the service is still regarded to be in beta, Amazon says there will be more Indian as well as International titles that will be added to the catalog regularly.

As with Amazon Prime membership in India, the Audible membership as well is being offered at a concession when compared to the US pricing, which is $14.95 and converts to over Rs. 1000, which is almost 5 times more than the Indian subscription fee. There’s a small caveat, however, which is Audible subscribers in the US are entitled to three titles every month, while Indian users will be restricted to just one.

One of the highlights of Audible is that you get to keep your audiobooks even if you decide to cancel your membership at any point in time, and you can even roll over unused credits to redeem them in the following months. Amazon is also offering long-term membership plans for Audible priced at Rs. 1,345 for the 6-month package, while a year-long subscription will cost you Rs. 2,332.

We expect the pricing to be an introductory offer, and just like the membership fee for Amazon Prime, the Audible subscription fee might go up too in a while, so if you’re keen on gifting yourself a subscription this festival season, head over to Amazon India and pick up your favorite titles in an audio format now!

Was this article helpful?
YesNo
TechPP is supported by our audience. We may earn affiliate commissions from buying links on this site.
Read Next
12 Best Audible Alternatives: Top Free or Cheap Audiobook Apps [2022]
#Amazon #Audible #Audiobooks