One of the major differences between flagship smartphones and mid-rangers is the chipset under the hood, more commonly known as the SoC. While traditionally, the difference in performance between a flagship-grade 800 series chip and a 600 series chip from Qualcomm has been quite prominent, Qualcomm has been trying to bridge the gap by providing more computational power to mid-range chips to make sure they don’t lag too far behind their flagship counterparts.

This trend was first observed when the Snapdragon 650 was unveiled and the performance it provided on a mid-range smartphone like the Redmi Note 3 surprised a lot of people. Then onwards, Qualcomm has added more such chipsets to its portfolio which can be used on smartphones that do not cost a lot of money but still provide solid performance, the Snapdragon 660 being a prime example.

While the 660 was not used by a lot of OEMs initially, it has recently gained a lot of popularity with the likes of Asus, Realme, and Xiaomi using it on their devices priced less than Rs 15,000. To close the gap even further, Qualcomm also debuted a new 700 series platform with the new Snapdragon 710 meant to be used on premium mid-rangers. And then there already was the 670 which not a lot of OEMs used, but despite that, Qualcomm launched yet another chip, the Snapdragon 675, which if we go by the specs on paper, seems more powerful than the 710, causing a ton of confusion. 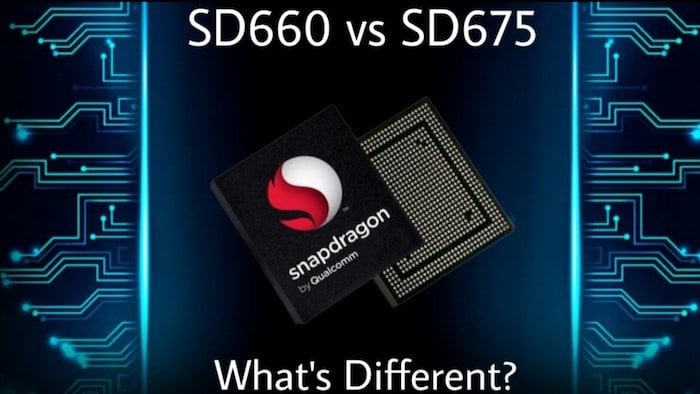 With the new Redmi Note 7 slated to launch soon in India with the Snapdragon 660 SoC, and a pro variant expected to come soon after that with the Snapdragon 675, we thought it would be the right time to compare the two chipsets and see how improved the 675 is when compared to the 660 and if you should be investing more money for the ‘pro’ variant if performance is of highest priority.

Let’s begin with the first basic difference which is the manufacturing process. The new Snapdragon 675 is based on the 11nm manufacturing process as opposed to the 14nm process of the 660. This ensures better power efficiency and given that the 14nm based chipsets were already battery-friendly, the 675 is expected to sip on the battery while providing great performance.

This is where we see the 675 taking a major leap. The chipset has eight cores, two of which are high-performance Kryo 460 cores clocked at 2GHz and the remaining six are the same Kryo 460 cores but with a lower clock speed of 1.7GHz for battery efficiency. The Kryo 460 cores are the latest addition to Qualcomm’s custom CPU architectures, unveiled post the Snapdragon 845 which uses Kryo 385 cores.

The Snapdragon 660, on the other hand, is also an octa-core SoC but has the older Kryo 260 configuration with four cores clocked at 2.2GHz and the other four at 1.8GHz. Both are 64-bit CPUs.

The Snapdragon 675 also receives a slight upgrade in the Digital Signal Processor as it gets the new Hexagon 685 DSP compared to the Hexagon 680 on the SD 660. The Hexagon 685 is the same DSP that’s used on the flagship Snapdragon 845 SoC to help with faster and more accurate AI and machine learning.

The Snapdragon 660 was accompanied by the Adreno 512 GPU which has now been upgraded on the Snapdragon 675 to Adreno 612. The GPU can push displays of up to FHD+ resolution and Qualcomm claims to have worked with developers in order to optimize this GPU better with popular smartphone games.

While the Snapdragon 660 touting Redmi Note 7 boasted of a 48MP rear shooter, a common question that was asked was how does the phone have a 48MP sensor when the SD 660 can accommodate a camera with a maximum megapixel count of 25? Well, the answer is pixel binning. While pixel binning is an entirely different concept by itself, the gist of the argument is that the 48MP camera used on a smartphone with a Snapdragon 660 chip does not produce true 48MP images.

Good news, the SD 675 natively supports true 48MP camera sensors like the new Sony IMX 586, rumored to make an appearance on the Redmi Note 7 Pro. Not just the higher megapixel count, but the 675 also has a better Image Signal Processor in the form of the Spectra 250L as opposed to the older Spectra 160 ISP on the 660.

These were the main areas where the new Snapdragon 675 excels over the 660. Performance and battery life are surely expected to be much better than the 660, and with the new 680 DSP as well as updated ISP, phones with the SD 675 can process AI elements really quick and also produce better image output.

For now, we can only compare the two chipsets based on the information provided on paper, but the real world usage comparison can take place once we have a phone touting the Snapdragon 675, which reportedly is going to be at the heart of the Redmi Note 7 Pro and Vivo V15 Pro slated to be launched pretty soon in India.

Was this article helpful?
YesNo
TechPP is supported by our audience. We may earn affiliate commissions from buying links on this site.
Read Next
Snapdragon 782G vs Snapdragon 778G Plus: What Has Changed?
#comparison #Face Off #qualcomm #Snapdragon 660 #Snapdragon 675