It’s been nearly six months since Qualcomm lifted the curtain on the Snapdragon 8 Gen 1, its most powerful chipset yet for cell phones, which was thought to be the future of smartphones in terms of both performance and power efficiency.

However, once the chipset reached consumers, things started to go steeply downhill as the Snapdragon 8 Gen 1, while powerful, offered sub-par performance with CPU throttling issues and poor battery life. It was determined that this was due to the technical failures that came with using Samsung’s inferior 4nm manufacturing process. 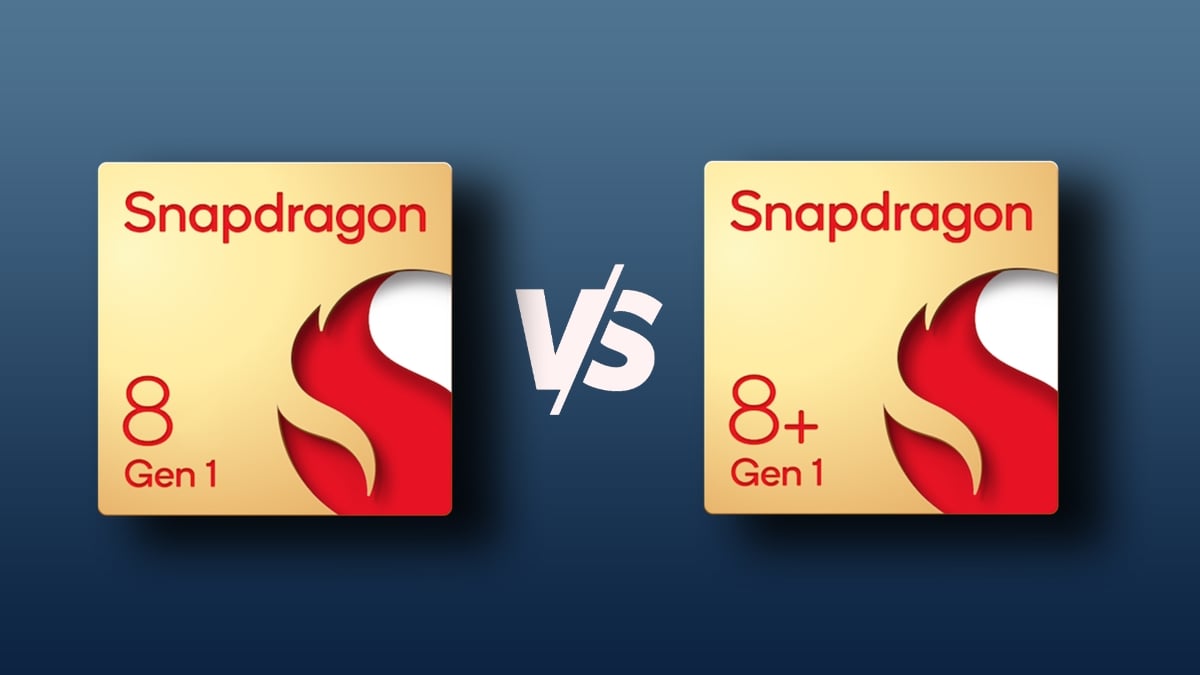 To address the damage and shortcomings of the 8 Gen 1, the San Diego-based company announced its latest Snapdragon 8+ Gen 1 chipset in May this year, jettisoning Samsung’s far inferior 4nm process in favor of TSMC’s N4 (4nm) manufacturing process.

However, with new smartphones using this chipset, such as the Asus ROG Phone 6, already on the market and many more on the way, it’s high time to find out which chip is better before you invest your hard-earned money in it. To help you out, we have put together an in-depth comparison that takes a closer look at all the important aspects of Qualcomm’s new chipset to see if it’s a worthy upgrade over its predecessor.

The Snapdragon 8 Gen 1 is a flagship chipset manufactured by Samsung using the 4nm process. This starts with the architecture CPU and the manufacturing process used to make the chips. The chipset mainly consists of 8 cores based on the latest Armv9 architecture, including 1 Cortex-X2 Prime core clocked at 3 GHz, 3x Cortex-A710 Gold cores clocked at 2.5 GHz, and 4x Cortex-A510 Silver cores clocked at 1.8 GHz.

The Snapdragon 8+ Gen 1, on the other hand, which consists of the same octa-core configuration based on the Armv9 architecture as the Snapdragon 8+, has a faster Cortex X2 Prime core that clocks at 3.2 GHz and is fabricated using TSMC’s N4 (4 nm) process.

Although the upgrades seem quite minor on paper, the 8+ Gen 1 offers around 10% more performance than the non-plus variant, thanks to the higher clock rate. In addition, the 8+ Gen 1 promises 30% more power efficiency thanks to TSMC’s advanced manufacturing process, which means less heat generation for sustained performance without thermal throttling and longer battery life.

Last but not least, Qualcomm claims that the 30% increase in power efficiency results in an additional 5.5 hours of talk time, 50 minutes more of social media app usage, and a total of 17 hours of music playback in real-world scenarios. However, your experience may vary since the stated numbers depend on or are limited by the size of the battery.

The GPU is one of the most important aspects of any chipset after the CPU cores, and the Snapdragon 8 Gen 1 has plenty of GPU horsepower thanks to its Adreno 730 GPU with a clock frequency of 800 MHz.

Like the CPU cores, the Adreno 730 GPU in the 8+ Gen 1 has been boosted by 10% more clock speed than its predecessor. If we were to do the math, this would correspond to a clock rate of 900 MHz, which is almost 80 MHz faster than the non-plus SoC.

Last but not least, the GPU is also said to be 30% more efficient and offers the full range of Snapdragon Elite Gaming™ features. These include support for volumetric rendering, which adds unparalleled realism to graphics like fog and smoke in games, and support for Unreal Engine 5, which offers advanced lighting and shadow effects. You also get HDR gaming with 10-bit color depth and Rec. 2020 color space. Not to mention, the Snapdragon 8+ Gen 1 features VRS (Variable Rate Shading) for a smoother and more immersive gaming experience.

As for wireless and cellular connectivity, both the Snapdragon 8 Gen 1 and 8+ Gen 1 feature Qualcomm’s latest Snapdragon X65 5G modem, which can deliver speeds of up to 10 Gbps with support for high-frequency mm-wave 5G at close range.

Apart from cellular connectivity, both chipsets are equipped with Qualcomm’s latest FastConnect 6900 mobile connectivity system, which is responsible for handling all types of wireless connectivity features, including Wi-Fi and Bluetooth. Both chipsets support the Wi-Fi 6 and Wi-Fi 6E radio standards, which offer a maximum bandwidth of 3.6 Gbps.

On the other hand, things look a bit different in terms of Bluetooth connectivity. Unlike the Snapdragon 8 Gen 1, which supported Bluetooth 5.2 and LE audio, the SD 8+ Gen 1 now supports Bluetooth 5.3 and Qualcomm’s aptX Lossless Audio codec, which can be used to transmit wireless music in 16-bit 44.1 kHz CD quality with negligible latency.

In terms of ISP and camera performance, both the Snapdragon 8 Gen 1 and 8+ Gen 1 feature similar hardware. This includes the triple 18-bit Snapdragon Sight ISP, which supports up to a 200-MP sensor capable of capturing up to 3.2 gigapixels per second. At the same time, the triple ISP also supports other computational photography features, including multi-frame shooting that can capture up to 30 frames in a second to create an image processing pipeline that merges them for a brighter and more visible image in low-light conditions.

These improvements aren’t limited to photography. Both chipsets are video recorders supporting HDR video recording at 8K 30FPS or 4K at 120FPS. In addition, both chipsets enable 64MP photos to be taken without shutter lag, even when recording 8K HDR+ video at 120 FPS.

As far as hardware support is concerned, nothing is separating the two chipsets here either. Both the 8 Gen 1 and 8+ Gen 1 support HDR10+ certified 10-bit displays, which can offer a maximum resolution and refresh rate of 4K at 60 Hz or QHD+ at 144 Hz.

Aside from display resolution and refresh rate, both chipsets also support up to 24 GB of the latest LPDDR5 memory clocked at 3200 MHz on a 4×16 bus with a maximum bandwidth of 51.2 GB per second.

As for the memory, both chipsets are equipped with UFS 3.1 memory, which offers a sequential read speed of 2,100 MB/s and a sequential write speed of 1,200 MB/s.

It’s not fair to not talk about a mobile chipset in 2022 without its Artificial Intelligence and Machine Learning capabilities. That’s why both the 8 Gen 1 and 8+ Gen 1 are equipped with Qualcomm’s 7th generation AI engine, which is estimated to perform nearly 27 trillion operations per second.

Meanwhile, Qualcomm claims that the same AI engine has now been upgraded to offer nearly 20% better performance per watt with the Snapdragon 8+ Gen 1, resulting in lower battery consumption when running intensive AI workloads.

Last but not least, it also features Qualcomm’s third-generation Sensing Hub, which is responsible for determining, assigning, and executing all AI system tasks that do not require a lot of power instead of taxing the powerful cores.

Now that we’ve thoroughly reviewed and compared all aspects of Qualcomm’s flagship chipset, here’s our opinion.

While the latest and greatest should always be the best choice, this doesn’t mean you should consider upgrading to the Snapdragon 8+ Gen 1. It’s a minor upgrade over the non-plus variant, which means that even if you get your hands on a few devices with the new chipset, you will not notice any noticeable performance gains in daily use.

However, the new chipset does make sense if you’re a hardcore gamer or if it’s to be used in a gaming smartphone that would benefit from the improved power efficiency and slightly higher clock rates.

Was this article helpful?
YesNo
TechPP is supported by our audience. We may earn affiliate commissions from buying links on this site.
Read Next
Snapdragon 8 Gen 1 Goes Official With a Series of Firsts [Features]
#comparison #qualcomm #Qualcomm Snapdragon #snapdragon 8 gen 1 #SoC