When Google announced a (slightly) more affordable Pixel, the Pixel 3a, and its slightly larger brother, the Pixel 3a XL, one of the first questions that ran across the minds of many was “how does this compare with the OnePlus 6T?” This was because at Rs 39,999 and Rs 44,999, the new Pixels came right into the territory of the Never Settle device which starts at Rs 37,999 and goes right up to Rs 50,999, depending on the variant you choose, and remains a formidable proposition even as the OnePlus 7 and 7 Pro loom large on the horizon. Well, here is a super quick look at how these two compare: 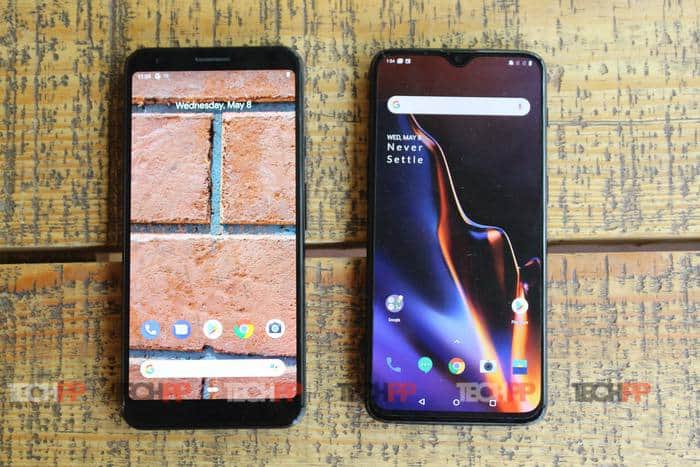 You wanna Never Settle or go for those Pixel-ated looks

First off, the matter of design. And it is a clash of two very different design cultures here. Both phones are reasonably slim – both are 8.2 mm thin – but that’s where the similarity ends. The OnePlus 6T comes with a glass back while the Pixel 3a XL comes with the typical dual textured back that is a Pixel trademark, with a glossy upper half. There is also a fingerprint scanner on the Pixel 3a XL, while in the OnePlus 6T, it is under the display. The OnePlus also has a notch in its display, while the Pixel 3a XL does not have one, resulting in larger bezels. Which one you prefer is going to boil down to your own tastes and preferences. We think the OnePlus 6T looks more contemporary and premium thanks to the glass back (the Pixel 3a XL is polycarbonate), and thanks to the notch it is actually more compact. That said, there is no doubting that the dual-textured back of the Pixel is one of the most distinct out there and stands out from the glass and gradient finish clutter.

When it comes to displays, both devices come with OLED displays, but they are rather dissimilar. The OnePlus 6T has a 6.41-inch display with a drop notch and Corning Gorilla Glass 6 protection and full HD+ resolution, while the Pixel 3a XL has a 6.0-inch display with Dragon Trail protection and full HD resolution. It is close but we would give it to the OnePlus for sheer size and more pixels (pun unintended) in a smaller frame and better protection. 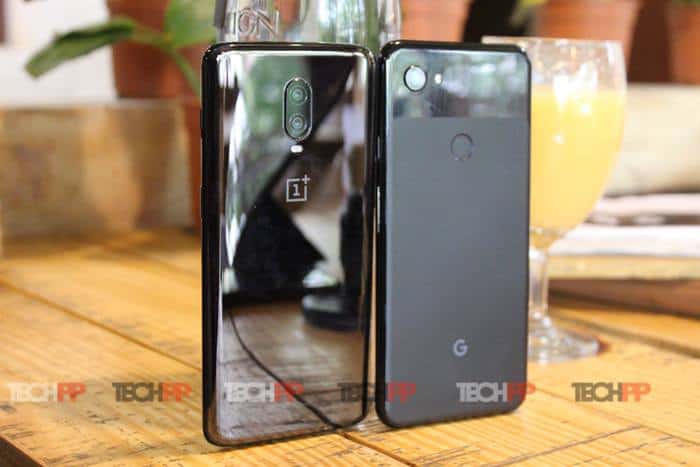 Perhaps the most significant difference between the two is the processor. And here it is literally a slaughter because the OnePlus 6T comes with a Qualcomm Snapdragon 845 processor, which is seen on most 2018 (and even some 2019) flagships, while the Pixel 3a XL comes with a much more humble and mid-segment Snapdragon 670. This is not really a contest – the OnePlus 6T is comfortably ahead and is likely to be more comfortable handling high-end gaming and multi-tasking than the Pixel 3a XL will be. 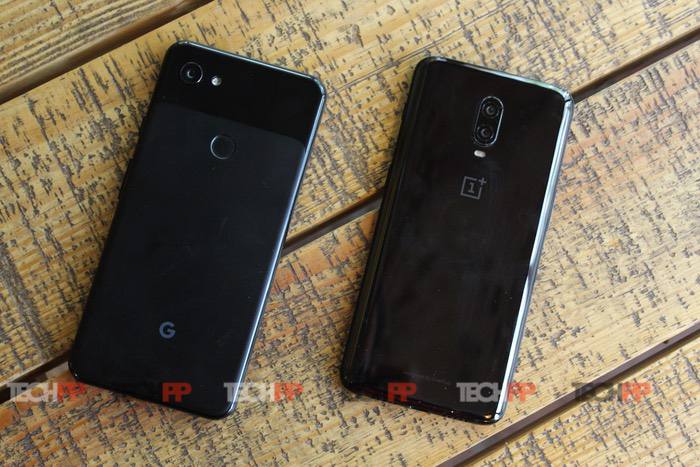 It might be giving some ground to the 6T, but the Pixel 3a XL has a massive ace up its seemingly modest sleeves too. And that is the camera. The Pixel 3a XL might have only single front and back cameras, but the rear camera is the same that won rave reviews for the Pixel 3 and 3 XL last year and for many remain the benchmark for mobile phone photography, thanks to a blend of good hardware and software magic. On paper, the Pixel 3a XL might only have a 12.2-megapixel rear sensor, which seems inferior to the 16 and 20-megapixel dual cameras on the OnePlus 6T, but take it from us, in terms of performance, we expect the Pixel to finish comfortably ahead of its rival. And the same applies to the front cameras – the 6T might have more megapixels (16 to 8), but the Pixel is much more likely to deliver great snaps.

It might give ground to the OnePlus in display, memory and processor power, but the Pixel 3a XL hits back with its software – pure Android without any bloatware whatsoever. And that’s not all, it comes with assured updates for a period of two years, as well as a number of perks including free high-res image storage on Google Photos. Yes, the OnePlus 6T also comes with one of the cleanest and clutter free Android overlays (Oxygen OS) we have seen and it too has an enviable update record, but if you are looking for a pure Android experience (and many are), the Pixel series is in a zone of its own!

The sound is definitely not a Plus for One! 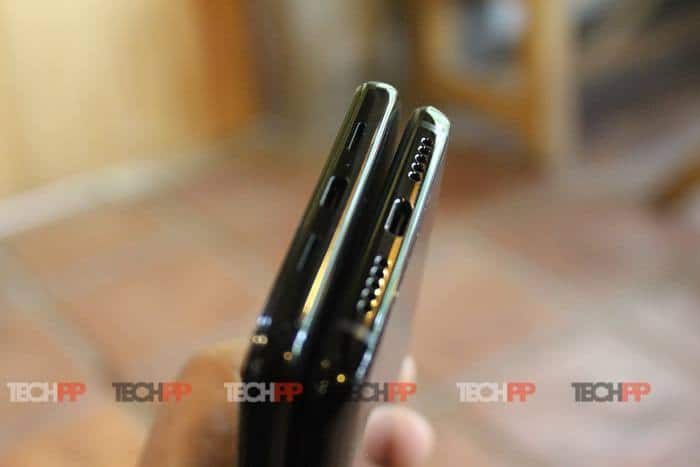 Another department where the Pixel 3a XL outguns the OnePlus 6T is good old sound. Not only does it come with a 3.5 mm audio jack (something the OnePlus 6T lacks) but it also has dual speakers, allowing it to deliver a better audio experience than the OnePlus.

Both phones come with fingerprint scanners, but whereas the Pixel has a conventional one on the back, the OnePlus 6T has a more modern one under the display. Score another one for the OnePlus 6T? Well, it is not that simple, really, because while there is no doubting that an under display fingerprint scanner turns more heads and seems more stylish, it often actually is much slower in terms of sheer functionality than the one on the back. It is a matter of personal preference here, but we find the scanners on the back more reassuring and reliable.

Never settle for just a fingerprint scanner, use face unlock 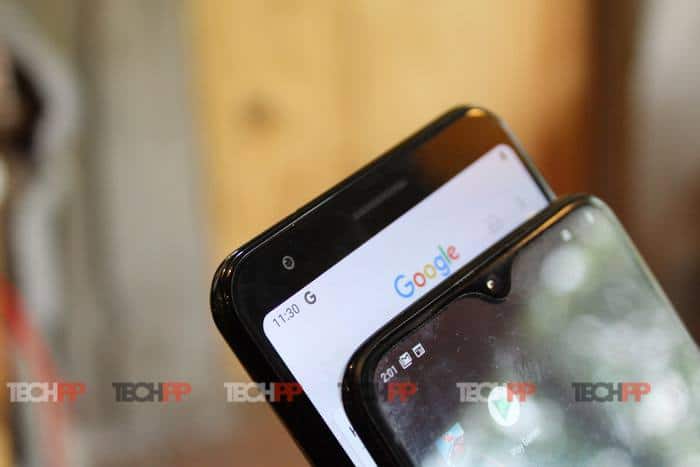 But if the Pixel 3a XL’s fingerprint scanner works more briskly than the one on the OnePlus, the Never Settler hammers the Pixel when it comes to face unlock. The OnePlus range has had one of the fastest face unlock systems we have seen on a device and while it is not super secure (the iPhone still seems to be miles ahead in that regard), it certainly beats the Pixel 3a XL, which does not even have a face unlock in device and security options.

Two Real SIMs versus One and one e-SIM

Both phones come with support for dual SIM connections, but there is a difference – while the OnePlus 6T actually has a card tray that supports two SIM cards, the Pixel 3a XL allows you only one physical SIM card, although it supports an additional e-SIM. Yes, e-SIMs are super convenient but considering that not all network operators are providing e-SIM facilities, we think most users would prefer the SIM set up on the OnePlus 6T.

Quick charging batteries, but guess which one got Dashed? 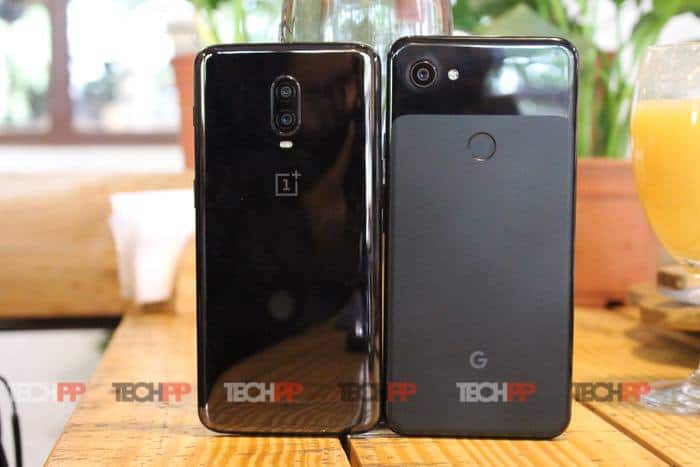 Plus bang for your buck, and not just One!

Which brings us to the little, or rather big, point of the price. And here the Pixel 3a XL is on slippery turf, as it trails the OnePlus 6T on many major hardware parameters (display, processor, storage, RAM), and yet actually costs more – it is priced at Rs 44,999 as compared to the starting price of Rs 37,999 for the 6 GB/ 128 GB variant of the OnePlus 6T (and it is available at lower prices from time to time). In fact, you can get the 8 GB/ 256 GB variant of the OnePlus 6T at Rs 45,999 – that is twice the RAM and four times the storage for an extra Rs 1,000. Do we need to spell out the winner here? 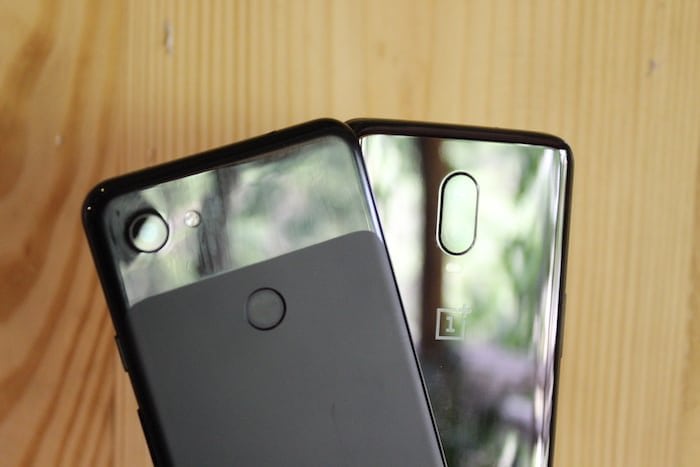 So, which phone should you go for? It really depends on how much you value two factors: camera performance and pure Android updates. If you give them a lot of importance, then the Pixel 3a XL is a no-brainer – it is potentially one of the best cameras one can get on a phone and being a Google device, is assured of Android devices like perhaps none other. However, if the spec sheet and components like display, processor, RAM, and storage carry a lot of weight with you, the OnePlus 6T wins this one by a very comfortable margin. As in most things, it really depends on what you consider important.

Was this article helpful?
YesNo
TechPP is supported by our audience. We may earn affiliate commissions from buying links on this site.
Read Next
Snapdragon 782G vs Snapdragon 778G Plus: What Has Changed?
#comparison #Google Pixel 3a XL #OnePlus 6T