Just like the smartphone world is adamant on bidding farewell to bezels, there is another member of the tech family which seems to be slowly disappearing from our gadgets – the good old cable or wire. The tech world has always been fascinated with the term “wireless.” We took wires away from telephones, computers, chargers, and earphones and connected them to each other wirelessly. But then came the words “true wireless” (blame Apple for it again). And while it is still making its way into our lives, it is already changing the basic wireless earphones game, by removing any kind of wired connection not just between the earphones and a device but also between the earphones themselves. 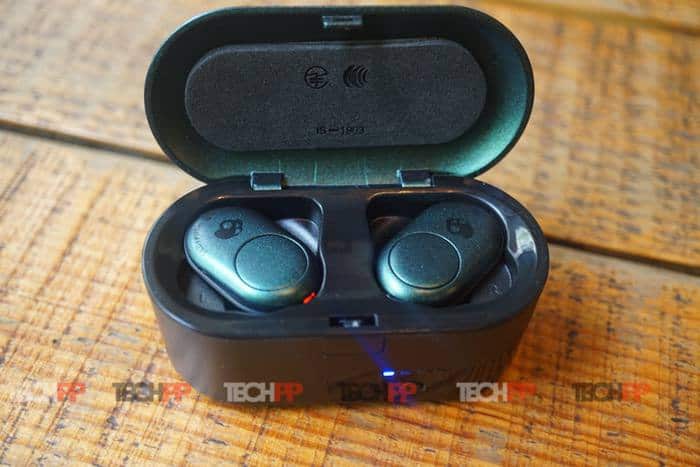 A feature which initially was exclusive to high-end earbuds, it is now slowly making its way to the budget and more affordable segment as well. And one of the latest brands to have taken the “truly wireless” plunge is Skullcandy, a brand that is known for its eye-catching design and slightly bass heavy sound, both of which it offers at relatively affordable prices. Skullcandy has recently launched its new truly wireless earphones, Push. Priced at Rs. 9,999, they are significantly cheaper than the AirPods. But do they have what it takes to be an Apple audio alternative?

Less than premium design, but a snug, secure fit! 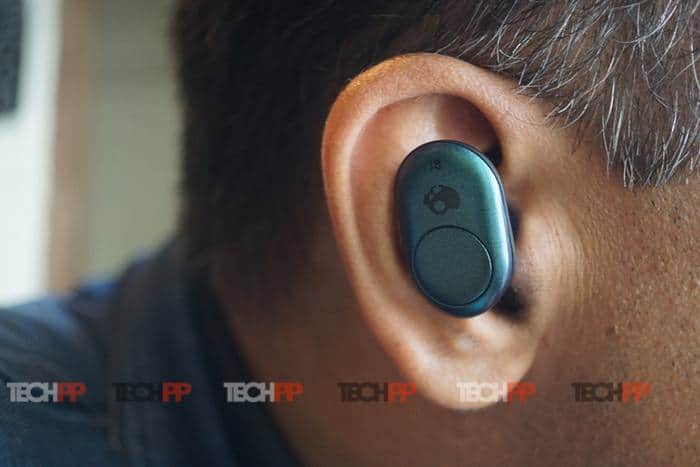 Looking at the Skullcandy Push, we were a little disappointed, especially when you consider the brand’s reputation for design. The capsule-shaped case which houses the earbuds, and which also doubled up as their charger, is made of plastic, and not the sort of plastic that can be mistaken for glass or metal, but very routine looking plastic. The case carries the company’s logo on top while the base is plain. On the front, there is a button which when pressed clicks open the case and unveils the earbuds. Slightly below that button are four LED light indicators that indicate the battery of the case and a circular button which when pressed turns the LED lights on, highlighting how much battery is left in the case. The right side holds the USB Type C port for charging the case while the rest of the case is bare. The case is a little bulky for truly wireless earbuds, while it can easily fit in a small bag, you will very uncomfortable carrying them around in your jeans’ pocket.

Click open the case and you will find the capsule-shaped buds nestled away nicely inside their perfect-fitting magnetic slots that both store and charge them. The buds also have the same low-end plastic look on the top and feature Skullcandy’s logo. Both the earbuds also hold a circular button each next to the brand’s logo for connectivity and other operations. On the inside, each bud holds eartips bundled with a wing that helps the bud stay put in your ears. Right next to this are three golden dots that charge the buds when they are put back in the case. The earbuds also have a smaller indicative LED light on the side that blink in different variations of blue and red, indicating connection, visible for pairing, and other connectivity options.

They may not look the best but the Skullcandy Push did not pop out of our ears as much as some of the other (even high-end) earbuds fell out. Once we twisted and fixed that wing, these actually fit our ears very snugly. Apart from the tip that comes on the earbuds, there are two other sizes that come in the box (learn, Apple!), allowing you to choose the one that fits you the best. Although light, the earbuds look a little bulky and poke slightly out of ears worn, but they do not look bad when you wear them – they do not stick out the way Bose’s earphones did. They also stayed connected to our device within an approximate area of 20-25 feet. The connection dropped at times when there were walls in between but other than that, we faced no connectivity problems. And unlike some earphones that lose connection with each other, these stayed connected to both the device and each other. They also have an IPX3 rating, so can withstand sweat and water splashes.

Need to “tap” a better interface 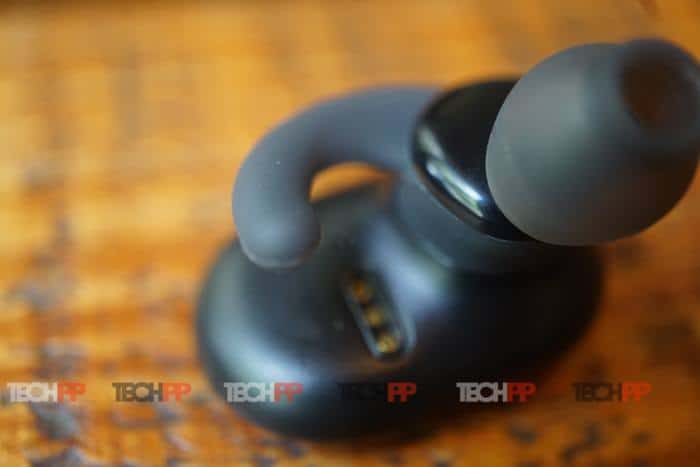 When it comes to connectivity, the Skullcandy Push is a one button wonder. Remember the single button on each earbud? Well, as it is the only button these true wireless earphones have, it means all the operations are completed using it only. That’s a lot of pressure. And it shows. The earphones use Bluetooth 4.2 and to pair your Skullcandy with your device, you have to long press the circular button on your earbuds and wait till the LED light starts blinking rapidly in red and blue color alternatively. Once it does so, bring your device (with Bluetooth turned on) close to the buds, and once you see the name of the buds in your Bluetooth list, tap on it to connect. 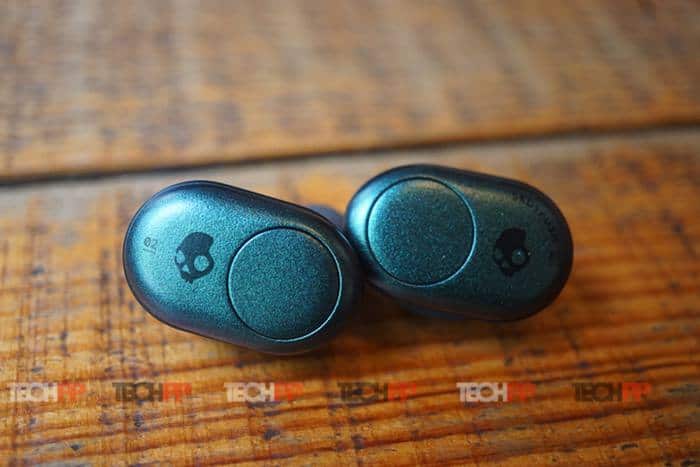 Along with connecting the buds with your device, the single button on each earbud plays other roles as well. The button controls volume, play/pause, and music playback. Press once on either one of the buttons and the music will play or pause. Pressing the left one twice will decrease the volume while pressing the right one twice will increase it and a long press will let you skip to next or previous song. Pressing the button three times will invoke Siri or the Google Assistant.

We found these controls a little tricky, simply because there were times when we pressed the button twice but the earbuds did not recognize it or sometime when we long pressed it to change the song, the buds would often simply shut down and turning them on individually again and again was another task. Also when we tried to fix the buds in our ears, we often accidentally pressed the button, which led to unintentional commands. Also, the Skullcandy Push do not have the feature which pauses audio when you take one or both of them out of your ears and resumes playing it when you put them back in. You have to manually press a button to pause the audio, and sometimes that press does not register. We like the fact that Skullcandy tried to build the entire UI around a single button on each earbud- and that too a large one, unlike the tiny ones on some of its rivals – but we really think that it, rather ironically, complicated matters by trying to keep them simple. We kept forgetting which bud to press to increase volume and skip tracks, for instance. Yes, one will get used to it in time, but it does have a learning curve.

Scoring on sound and stamina 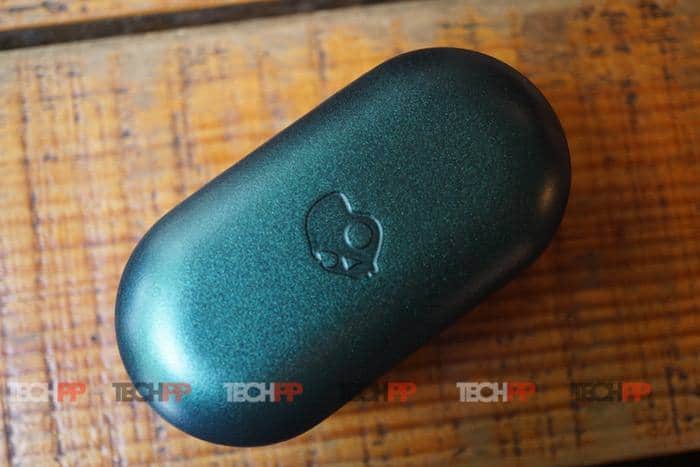 When it comes to sound quality, true wireless earbuds do not have the greatest reputation. In the past, we have complained about the true wireless earphones’ output being very one dimensional. The Skullcandy Push actually solves that problem to a large extent. The buds delivered a clear, clean audio experience with a hint of dimension.

The sound of the Skullcandy Push is loud and clear. The brand has pushed the bass on the earbuds which makes the experience unlike any other that we have had in the past. Yes, on maxed out volume some tracks do tend to get a little noisy but the sound is anything but flat, which has been a major problem with most true wireless earbuds. Indeed, bass heavy music is what the Skullcandy Push are made for. The buds caught the right notes without really being overbearing. And it is not just about the bass. Even in the mellow song zone, the Skullcandy Push shone. Not as brilliantly, but they delivered a very good experience, nevertheless.

The Skullcandy Push does not come with ANC but because they fit in so snugly, they offer really great noise isolation, which means it really keeps the ambient noise out. The audio quality of the Skullcandy is a massive plus point considering the price and design of the earbuds. 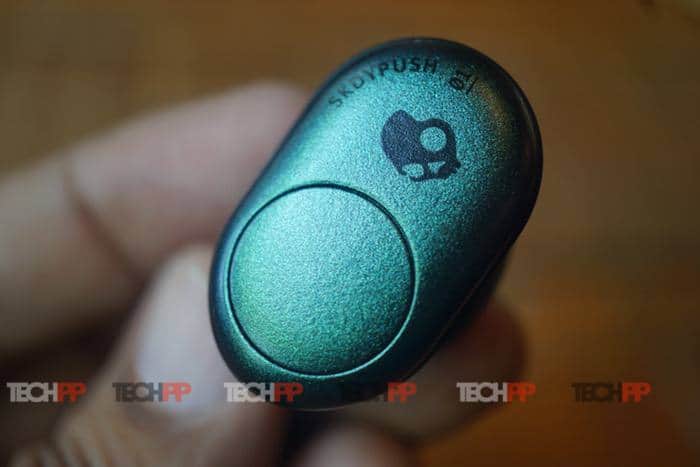 It is not all flowers and roses in the Skullcandy world, though. There are some thorns, too. The microphones on the buds are a bit of a disappointment. They microphone often failed to put our voice clearly through and we got an earful of complaints (pun intended) from those we were talking to. Because the left bud is the main one, you can only get the call audio in that one bud while the other sits idly in your ear, which feels kind of weird.

Skullcandy promises a battery life of six hours on the buds and the earbuds lived for about five hours on a single charge, which we think is very good for the segment. Once drained completely, you can easily put the buds back in their case for recharging. But the battery life on the case itself is not great, as they can only charge the buds about twice completely before dying. This is disappointing, especially considering the size of the case.

Headache for the AirPods? 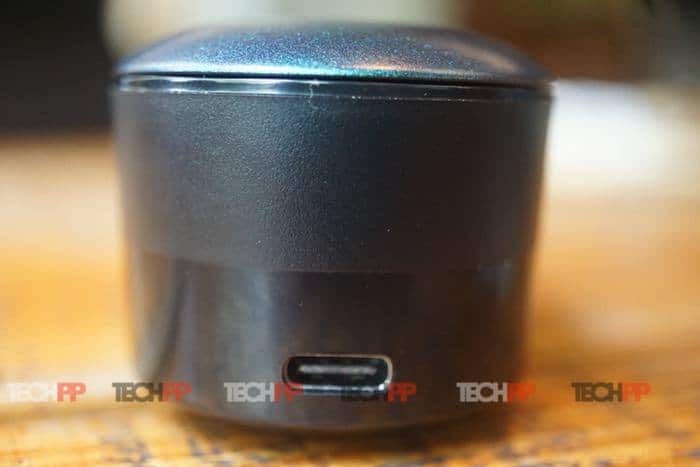 Priced at Rs. 9,999, the Skullcandy Push is definitely one of the better true wireless earbuds you can buy under Rs. 10,000 price tag – a zone from which most of the better-known brands are largely missing. The Push is more affordable than the AirPods 2 from Apple, which are priced at Rs. 14,990, and are easily the best selling true wireless earbuds in the market, but in our opinion is still uncomfortably close to them. Yes, the Skullcandy Push comes with great sound and fit well in our ears and have a proper IP rating too, but the AirPods have an upper hand in the connectivity, functionality, and microphone department. And for all the fun poked at them initially, they do look more premium. The Skullcandy Push beat the AirPods in terms of sheer sound quality and fit, but have their work cut out in emerging as better options. For below Rs 10,000, however, they are perhaps as good truly wireless audio as you can get right now.

Review Overview
Was this article helpful?
YesNo
TechPP is supported by our audience. We may earn affiliate commissions from buying links on this site.
Read Next
Skullcandy Mod Review: Betting on doing the basics well
#Airpods #review #Skullcandy #Skullcandy Push #Wireless Earphones