Mention the brand ‘Skullcandy,’ and most people will think of an in-your-face design and a bass-heavy sound. In a field where uniformity tends to rule the roost, the brand tries to stand out in terms of both design and audio signature. With its latest TWS, the Mod, however, the brand has followed a slightly different approach, opting to focus heavily on basics instead of a few stand-out features.

Skullcandy Mod Review: Smart design with some touches of flair

That does not mean that the Skullcandy Mod do not come with any design flair. The cuboid-shaped case with rounded edges, in which they reside, will get some attention, thanks to the trademark skull logo on the front, the blue accents on the back (we got the light grey/blue variant), and a top of the lid that juts out a little, enabling you to open the case with one hand. The base of the case has a USB Type C port and an LED indicator. Open the case, and you will again see a rather different dash of color – the inner part of the lid is bright blue, while the lower part of the case and the buds themselves are grey.

The buds lie on their sides in the case. While they are attached magnetically to the case, the magnets are not very strong, so they do not seem a very secure fit and can rattle inside the case if it moves. They also fit into the case at a slightly unusual angle, so you might struggle to put them back correctly initially. The buds themselves are a greyish shade, although they take on a slightly bluish shade in some light conditions and have a standard design with no sticks. They have LED indicators on them to show connection status and also a rather subtle Skullcandy logo (we almost missed seeing it on the grey buds). That logo is also actually a pressable button and lets you control different aspects of the buds. While having real buttons saves you from the problem of accidental touches with a touch interface, these buttons can be a little problematic as every time you press the button, you actually drive the buds deeper into your ears. 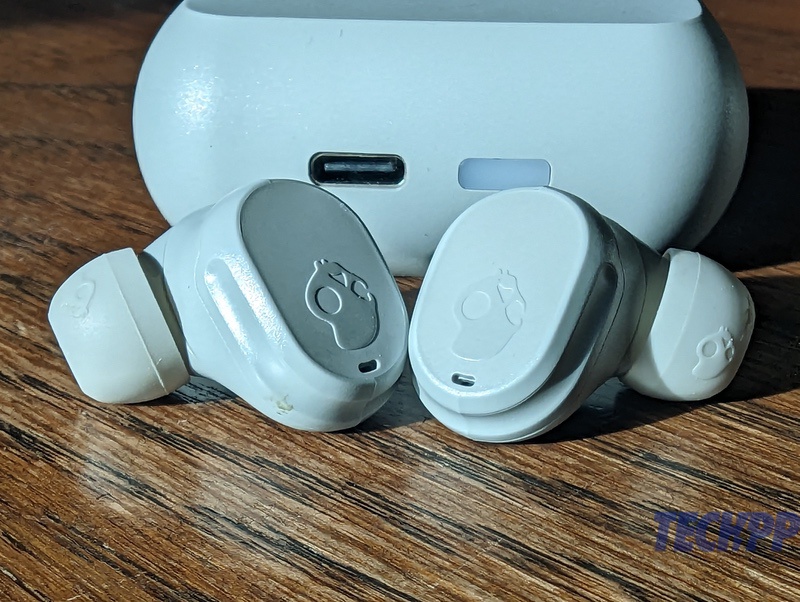 At around 55 grams, the case with the buds inside is light and compact enough to slip into normal trousers and coat pockets without causing any unseemly bulges. They are sturdy enough, and the buds come with IP55 certification, so you can use them in the gym without any fear. You get a USB Type C to Type A charging cable and two other sets of eartips. 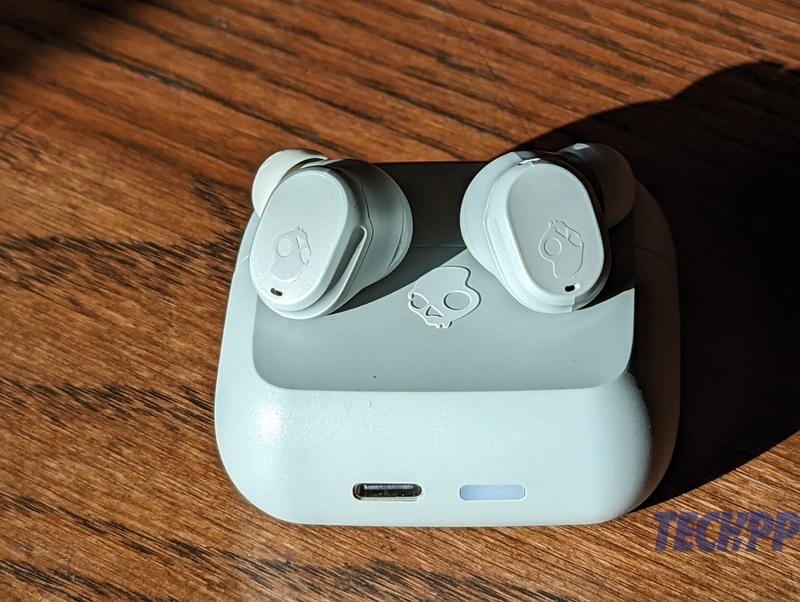 The Skullcandy Mod buds fit easily into our ears and were light and comfortable enough to wear. They do keep out a lot of external sounds but be prepared for some to leak in, especially if you are in noisy conditions. Interestingly, while they have no ANC, they come with a Stay Aware mode, which is Skullcandy’s take on a Transparency mode, and lets you hear external sounds. It is a handy feature and works well enough, especially for those who like to wear their TWS while they are out and about.

Rather surprisingly, we found the Skullcandy Mod not following Skullcandy’s generally bass-focused audio template. The sound we got from them was largely balanced, with no special stress on any frequency. Volumes were very good too, although the buds come with relatively small 6 mm drivers, with no distortion at high volumes. 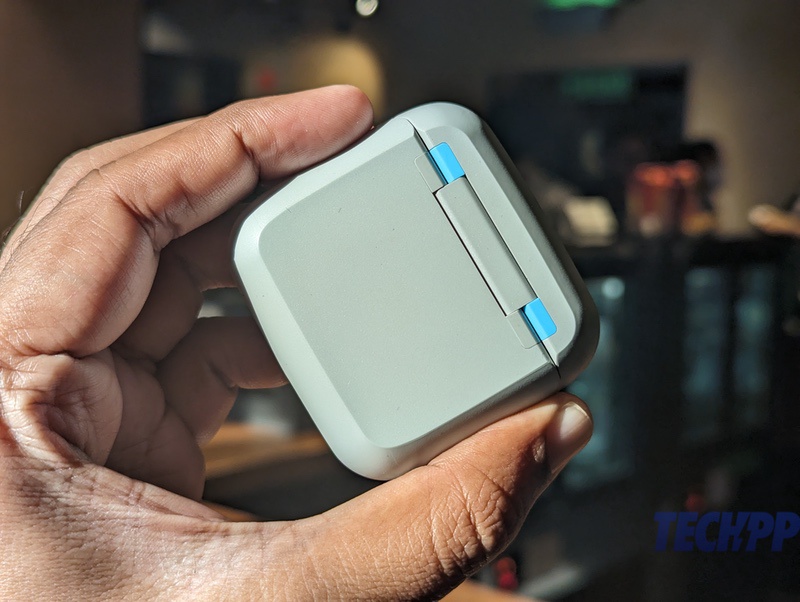 What really impressed us was that the sound delivered by the Mod was always very clear. Very careful listening does indicate a slight tilt towards bass in some cases, but it is not very distinct. The accompanying Skullcandy app (which we recommend you download) comes with equalizer presets for podcasts, movies, and music (none for gaming, though), and you can also add your own custom preset if you wish. The app is actually rather handy and well-designed and also lets you customize button controls and so on. Getting back to the sound on the Skullcandy Mods, we would rate it as being very good without being exceptionally so. Bassheads might want more rumble, and purists might hanker for something with slightly more treble, but if it is clarity and a relatively balanced signature that you seek, you will find it here. 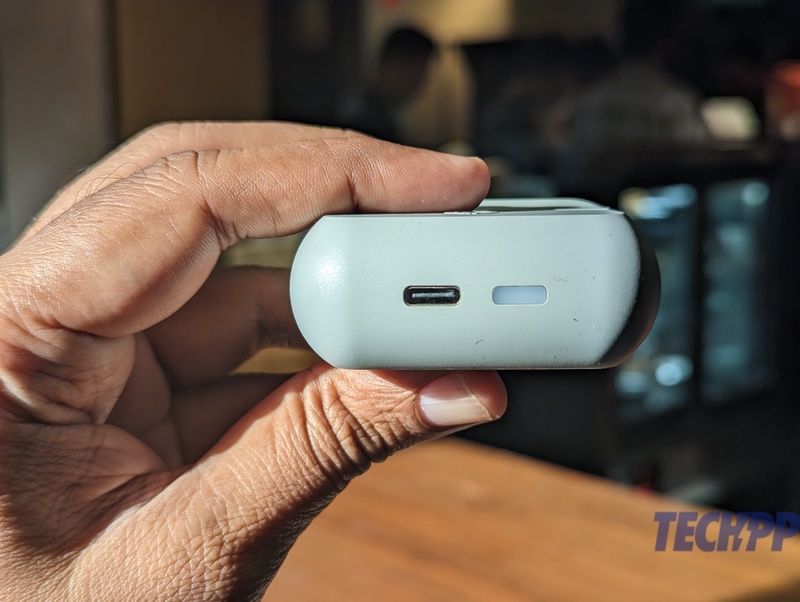 The button controls on the Skullcandy Mod are simple enough to understand – a single press of either bud will play or pause content or let you take or end a call; a double press on the right bud increases volume while one of the left reduces it, and pressing and holding the right bud for a second takes you to the next track while doing the same to the left bud takes you to the previous one. You can customize these controls through the app and also add options for pressing each bud three times (we did it to activate a virtual assistant). However, as we stated earlier, pressing the buttons often ends up driving the buds deeper into our ears and sometimes unsettling them.

Pairing is as easy as opening the case and taking the buds out, which puts them in pairing mode (if not already connected to another device). One of the neat features of the Mod is the support for multi-point pairing, letting you connect it to two devices simultaneously. The TWS is smart enough to switch between them automatically, so if you get a call on your phone while you are watching a video on your notebook, the buds will switch automatically to the phone for the call. It works very smoothly too. On the subject of calls, the Mod buds are surprisingly good, which is a rarity at its price point. Skullcandy claims it is because of what it calls a Clear Voice Smart Mic in each bud, and it actually works surprisingly well. We had no complaints on the call front from the people we spoke to while using them. Another interesting feature of the buds is the presence of Tile support, allowing you to locate the buds from your phone if they get lost.

Skullcandy says that the Mod lasts about seven hours on a single charge, and we found this to be broadly accurate – we generally got between 6-7 hours on a single charge. The case is supposed to add another 27 hours to the buds, and while this is a little more difficult to gauge as one places buds back into the case even when they have plenty of charge left in them, we got through comfortably more than a week of usage before we needed to charge the case and buds, which is impressive. 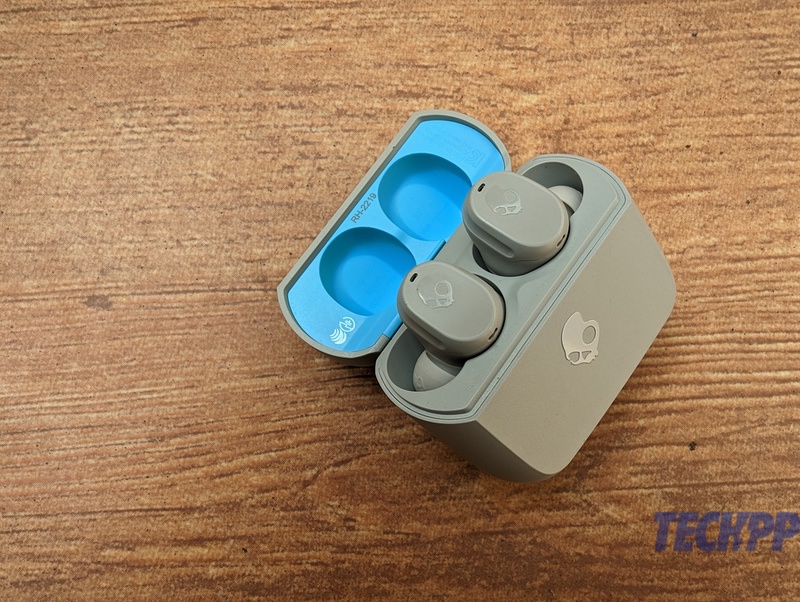 The Skullcandy Mod are available at Rs 5,999, and this puts them squarely in the Rs 3,000 – Rs 7,000 price zone, which is a tricky one in the TWS world. It is above the basic budget level but just short of the premium one. Not surprisingly, the Mod face a lot of competition, most notably from lower-priced offerings from the likes of Realme, Oppo, and Redmi, which add ANC and a slightly heavier bass sound to the mix. There will also be those who will feel that investing a little more could get them a TWS from the likes of Sony and Sennheiser.

But while the Skullcandy Mod face competition, they are certainly not overwhelmed by it. In fact, we would say that they are perhaps the most well-rounded TWS in their segment and are actually a great option for those who want a TWS that fits in everywhere, from the office to the gym to regular listening. Audio quality, multiple-point connectivity, battery life, calling, dust and water resistance…the Mod get all of them right and even compensate for not having ANC with a decent transparency mode. These are a great all-rounder for anyone wanting a good pair for TWS at under Rs 6,000.

Review Overview
Was this article helpful?
YesNo
TechPP is supported by our audience. We may earn affiliate commissions from buying links on this site.
Read Next
10 Key Takeaways From The State of Sound Report 2022
#review #Skullcandy #Skullcandy Mod #TWS 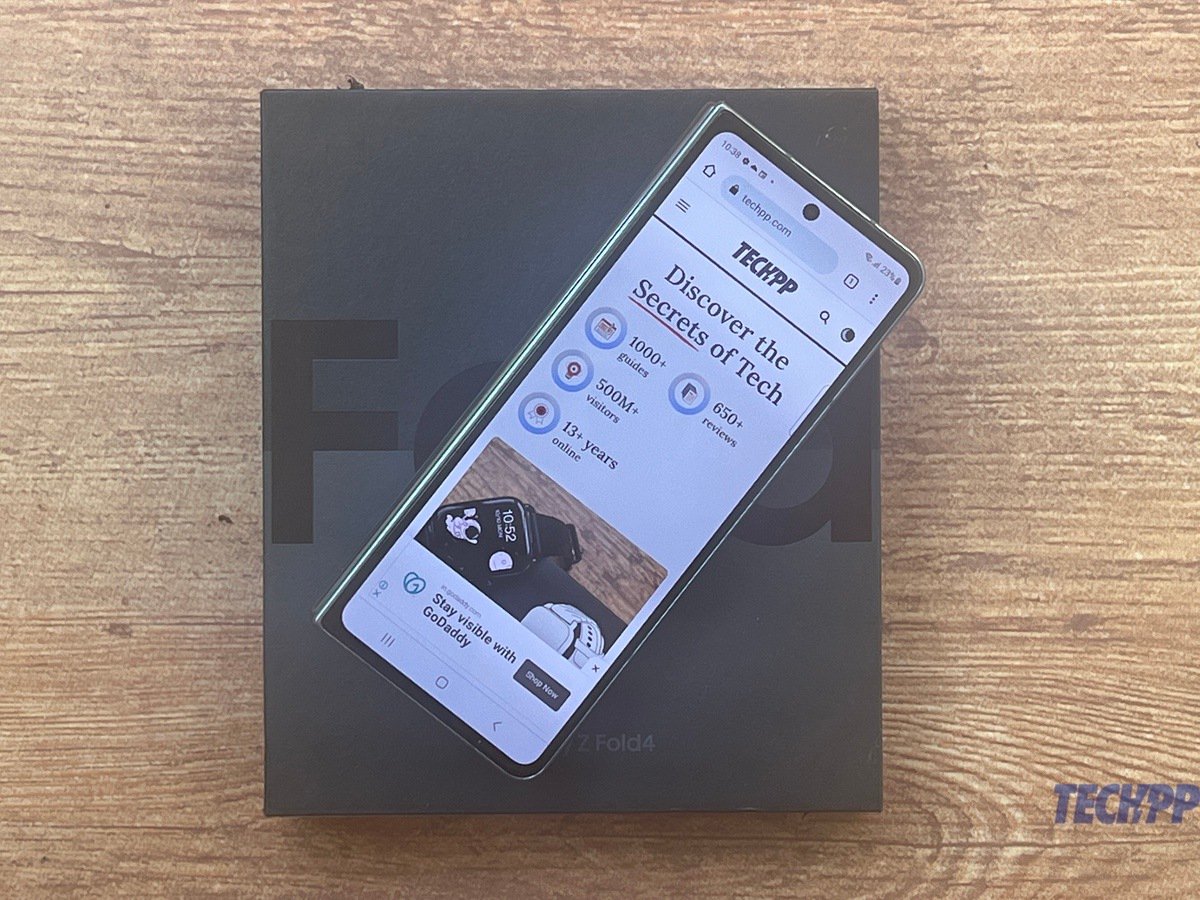