Samsung has hit a home run with the Galaxy M series of devices. Targeted squarely at the mid-segment of the highly competitive Indian market, the series has managed to carve a niche for itself in a zone dominated by the likes of Realme and Redmi. And it has done so with devices that mimic and indeed sometimes even challenge the price to performance ratio delivered by the products from those two brands. The Galaxy M10, and in particular the Galaxy M20 and Galaxy M30 have garnered very positive reviews. And now comes the Galaxy M40. 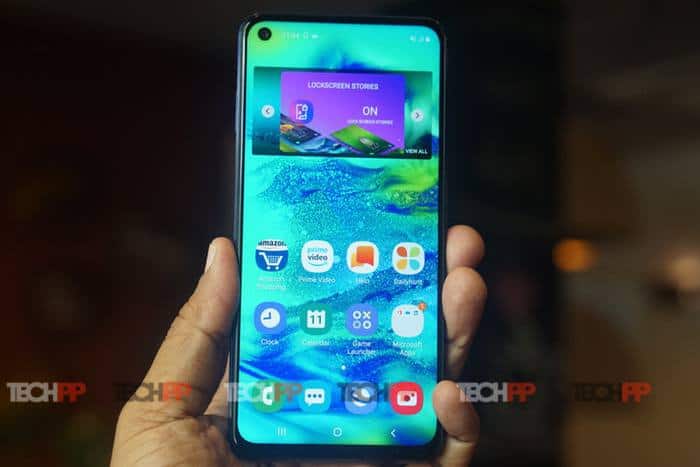 And honestly? We are a little confused.

Do not get us wrong here. The Galaxy M40 ticks a lot of boxes in the right way. It is the first in the Galaxy M series to come with a Qualcomm processor (its predecessors used Samsung’s very own Exynos chips) and brings some serious flagship-level specs to the mid-segment table – the coolest of which is perhaps the Screen Sound technology, which transforms the display into a speakerphone calls, doing away with the earpiece altogether. There is also a fingerprint scanner, a triple rear camera arrangement, a cleaner One UI (that is seen on the A-series and the S series), lots of RAM (6 GB) and storage (128 GB, expandable to 512 GB) to go around, a USB Type-C port with support for fast charging (a 15 W charger in the box as well), a triple camera set up on the rear (32-megapixel main sensor with f/1.7 aperture, 5-megapixel depth sensor and an 8-megapixel 123-degree ultra-wide sensor), a 16-megapixel selfie shooter, and a 6.3-inch full HD+ display with a punch hole in the left corner for the selfie camera – an Infinity O Display, in Samsung’s terms. All this with the typically smart M series design with a subtle gradient finish this time around on the back, which remains stubbornly carbonate in a glassy era. Not that we mind. 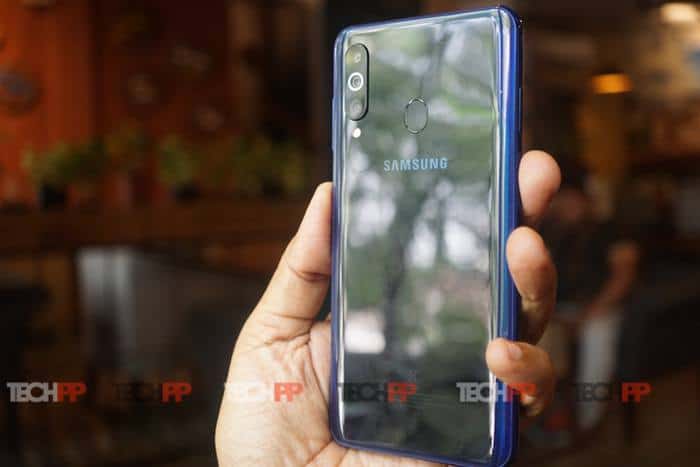 And to be fair to the Galaxy M40, it delivers a very good performance. We did not have any major problems with the Exynos chips on the Galaxy M20 and Galaxy M30, but the Snapdragon 675 definitely ups the ante. We could play games like PUBG and Asphalt at high settings and although there was a hint of a rise in temperature, it was nothing too alarming. In terms of speed, take it from us, this is easily the fastest M series device we have seen, and right up there with the likes of the Redmi Note 7 Pro. We also liked the display, which was bright, and thanks to the punch hole notch (for which we are beginning to get a bit of a soft corner), offered largely unobtrusive viewing. And while the call quality was not exactly top-notch, we love the idea of Screen Sound. The sound overall is of decent quality, making this a good device on which to watch films and play games. 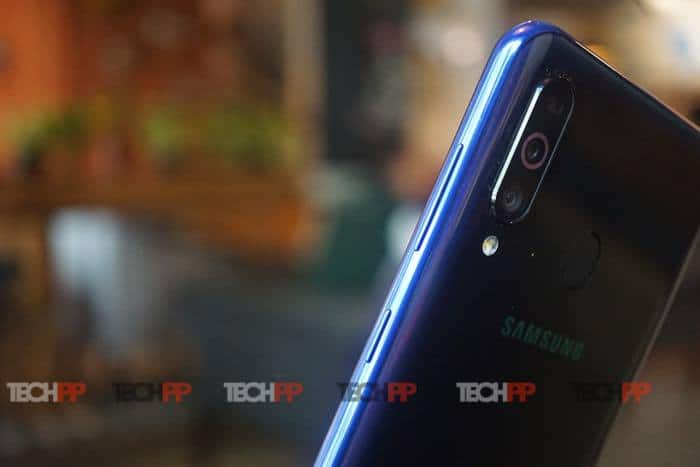 The triple camera set up was a bit of a dampener, as it did not exactly rock in low light and showed a tendency to deliver slightly faded snaps even in normal light. Still, it did a decent job in terms of detail. Incidentally, the 32-megapixel sensor takes 12-megapixel shots by default. You can switch to 32 if you wish through manual controls, but we would recommend sticking to 12 megapixels as detail seems better in those. There are plenty of shooting modes, and the ultrazoom is very handy for landscapes, although Samsung’s idea of using a relatively lower resolution sensor for wide-angle shots does seem a little contradictory – you get lesser details in shots that capture more. The selfie camera does tend to smoothen and brighten skin, but it actually does bokeh (live focus, in Samsung speak) better than the front cameras do, once again making us question the presence of dedicated cameras for the task. All in all, if you are willing to be patient and do some edits now and then, the cameras on the M40 will deliver good results. They are not deal makers, but not deal breakers either. 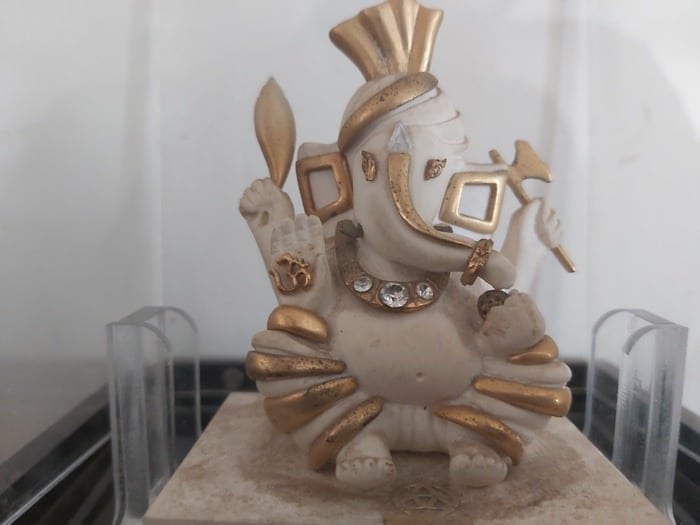 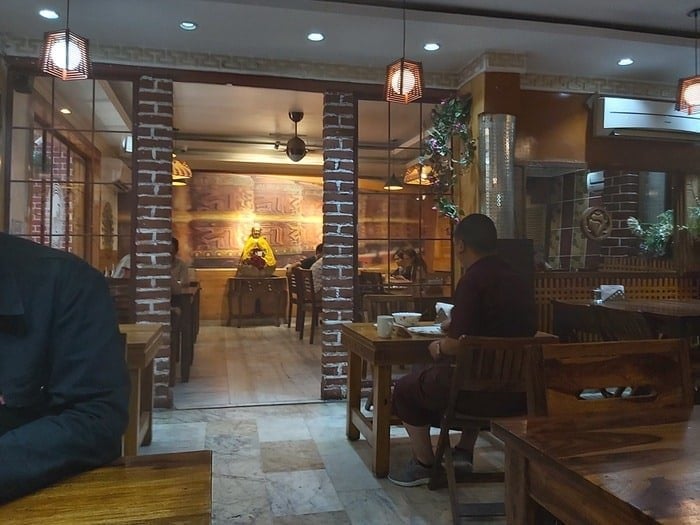 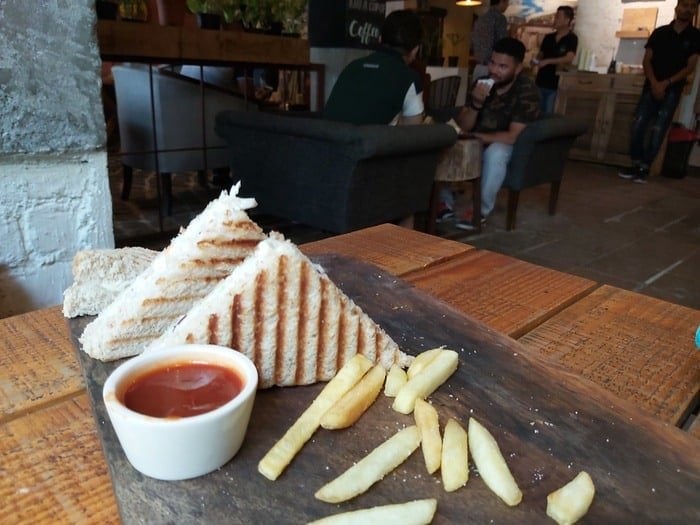 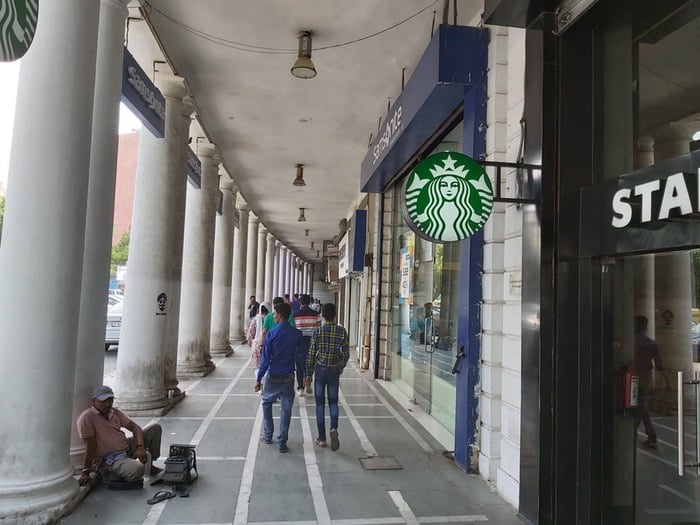 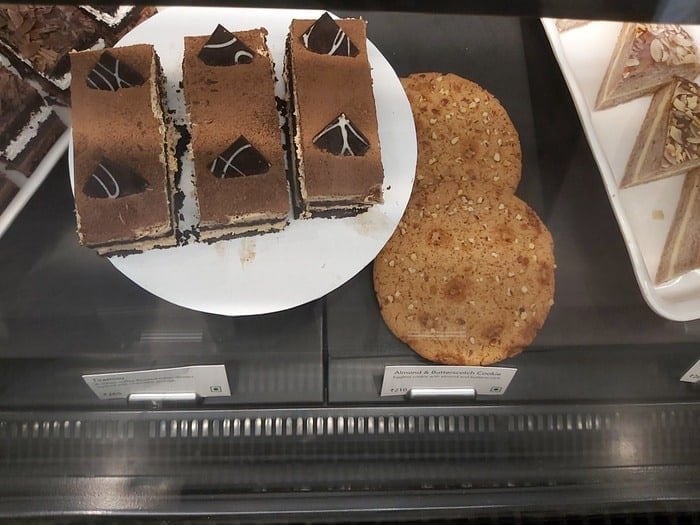 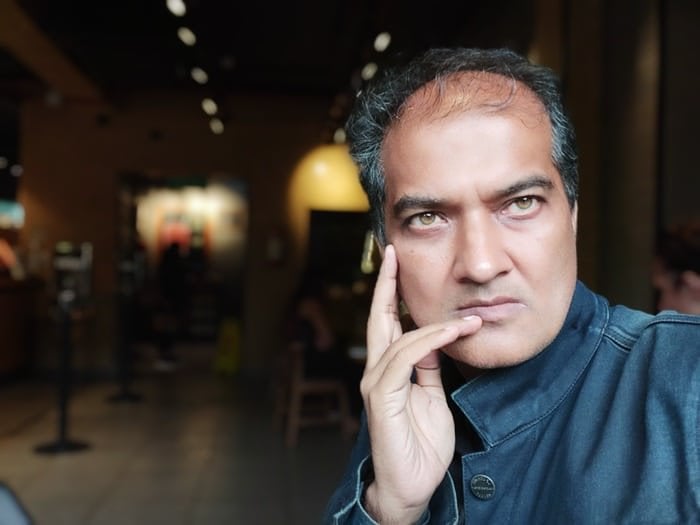 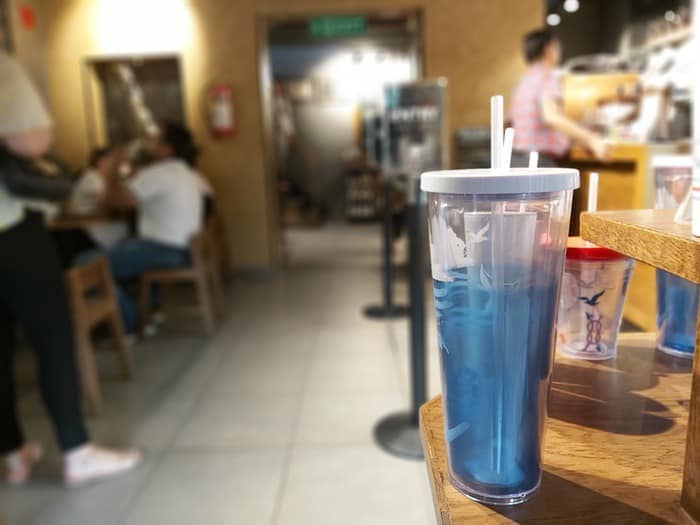 The 3500 mAh battery is good enough to see off a day of heavy use. And with support for fast charging, you can get about fifty percent charge in half an hour – with a full charge taking about an hour and a half. And One UI (over Android Pie) is a massive improvement over Experience OS, which was seen on earlier Galaxy M series devices – it is far less cluttered and relatively simpler to use, most noticeable in the Settings, where you do not get flooded with options.

But if the display is good, the processor very good and the cameras, battery, OS and sound are decent, then why are we getting so confused about the Galaxy M40? 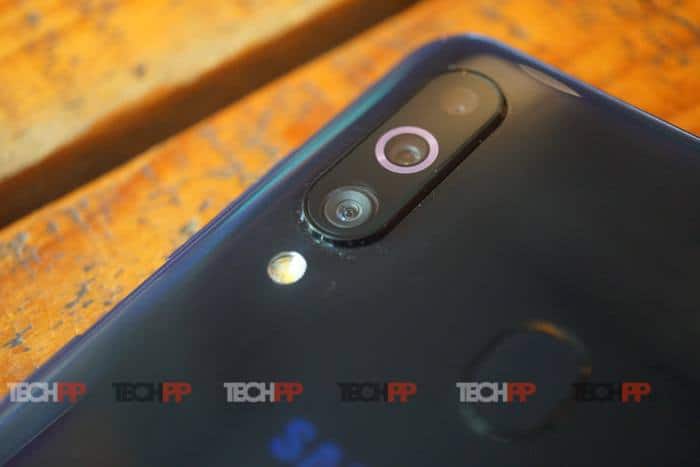 Well, mainly because it cuts some very strange corners. Yes, its 6.3-inch display is very good but seems a notch below (notch notwithstanding) those of the Galaxy M30 and the Galaxy A50, both of which sport Samsung’s trademark, bright, colorful AMOLED displays of similar resolutions and actually larger sizes, and are available for the same (or even lower) price. And while Screen Sound is cool tech, Samsung has also ditched the 3.5 mm audio jack in the Galaxy M40, which seems an odd decision when you consider its price point – the port has been generally ditched by higher-end devices. Then there is the little matter of the battery. Or to be more exact, the matter of the absence of a large battery. The M30 had brought a massive 5000 mAh battery to the smartphone game and the Galaxy A50 had brought a 4000 mAh one. In comparison, the 3500 mAh one on the Galaxy M40 looks…well, a little on the smaller side. And well, the Galaxy M30 has got One UI in a software update and the Galaxy A50 comes with it out of the box, so that’s another benefit replicated. 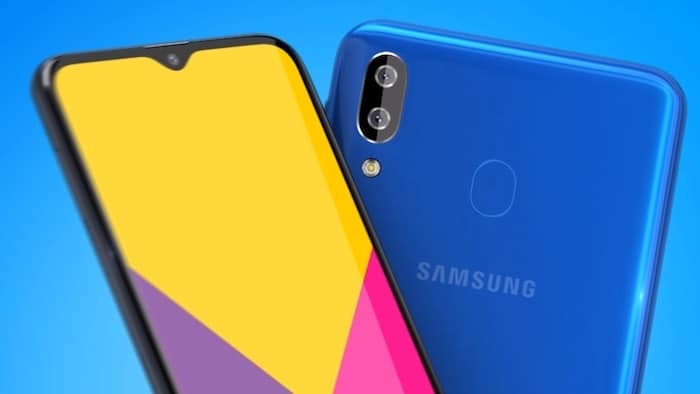 Which is why we must confess to being a little confused about where at Rs 19,990, the Galaxy M40 fits in in Samsung’s portfolio, especially when the A50 is available for a similar price and its predecessor, the Galaxy M30 is coming for Rs 14,990, albeit both start at lower RAM and storage configurations. Yes, its processor puts it among the more powerful devices out there, but if you are not totally into gaming, then the Galaxy M40’s appeal begins to dim a little. The punch hole notch and the Screen Sound are cool features but are not exactly killer additions, especially when its own similarly priced brethren come with AMOLED displays, comparable cameras, and larger batteries. And this is when we have not even taken the likes of the Realme 3 Pro (Rs 13,499) and the Redmi Note 7 Pro (Rs 13,999) into contention, both of which come with better cameras and batteries, albeit at lower configuration levels. There is also the looming presence of the Poco F1, which though almost a year old, still sports the very good Qualcomm Snapdragon 845 processor, has a larger battery, and now begins at below Rs 20,000. 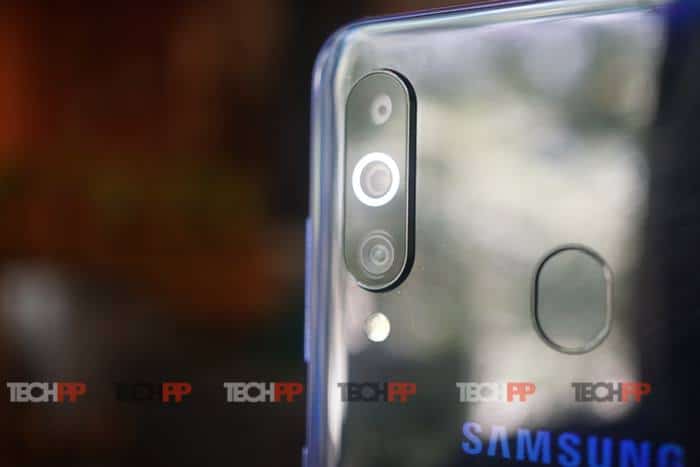 The Samsung Galaxy M40 has a lot going for it. But unless you are a gaming fan who is crazy about the Samsung brand, we are not too sure where it is headed. It is easily the most powerful M series device, but its pricing puts it in a very odd place.

Review Overview
Was this article helpful?
YesNo
TechPP is supported by our audience. We may earn affiliate commissions from buying links on this site.
Read Next
Skullcandy Mod Review: Betting on doing the basics well
#review #samsung #Samsung Galaxy M40