After letting Chinese brands like Xiaomi and Realme take over the sub-Rs 15,000 phone segment, Samsung is trying hard to get back in the game by launching smartphones one after another. The South Korean brand has introduced the new series and smartphones that are radically different from what it was offering a couple of years ago. One of the series that has caught the attention of many is the M series by the company. Samsung recently launched the M10 and the M20, both of which were largely based on a theory most smartphone brands subscribe to in the budget-mid segment: feature-rich smartphone at a relatively lower price. Now Samsung has added another smartphone to the series, the M30, which also shares its predecessors’ idea of being. But is it enough to beat the Redmis and Realmes presently ruling this segment? 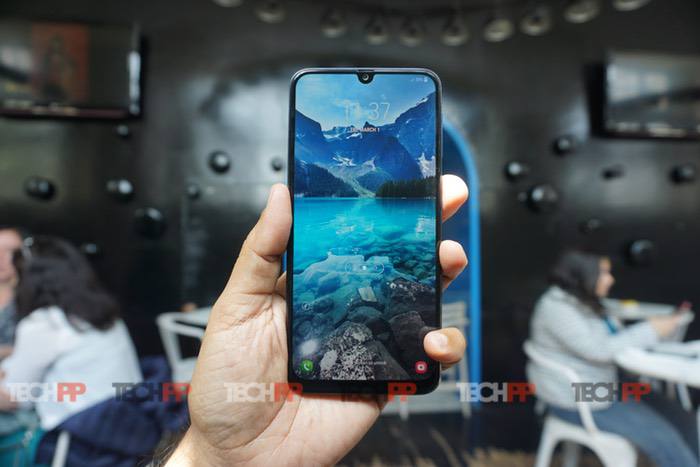 There was a time when the design of the budget segment smartphone was predictable but thanks to the cut-throat competition in the market, phone design in general, across segments, is becoming very predictable. Shiny glossy, glass back, gradient finish, tall, edge to edge display are just some the design features most smartphones share these days and the Samsung Galaxy M30 has not strayed too far away from that template. The device comes with a tall 6.4 inch full HD+ AMOLED display with a drop notch on top and thin bezels surrounding all four sides (the chin being slightly thicker comparatively). It comes with a polycarbonate back which has a glossy gradient finish, making up for all the glass the back does not possess. 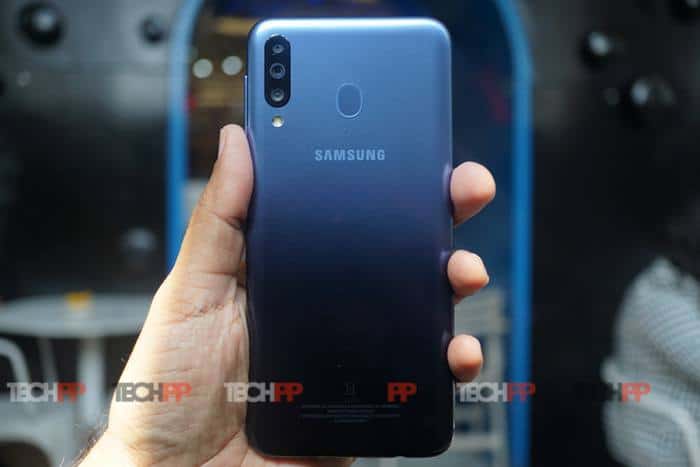 The back houses the triple cameras, the flash and the fingerprint scanner along with the company’s logo. (For more details on looks and design read this). Because glossy backs and gradient finishes are pretty common nowadays, we do not think the M30 will turn heads. The back may be trying to sneak in that glass factor with that reflective plastic but the minute you will hold the phone in your hand you, that confusion will definitely go away.

That said, the smartphone looks good. It may not look premium, but it definitely does not look like it belongs strictly in the mid-segment either. The plastic back does attract smudges and scratches but not as much as a glass back would. Despite having a big screen, the M30 does not feel too big while sitting in the hand. Yes, operating it with a single hand might be an uncomfortable task but is something which can be done with a bit of effort.

The Samsung M30 is powered by Samsung’s in-house Exynos 7904 chipset, which is paired with 4 GB RAM and 64 storage. It is also available in a 6 GB/ 128 GB variant. The storage can be expanded up to 512 GB via microSD card. The device comes with dedicated space for microSD card, and there are separate slots for dual SIM cards.

For the first few days of our review period, the Samsung M30 performed pretty well. The smartphone jumped smoothly from one app to another and sailed effortlessly through all the multitasking jobs we threw at it. But as time passed, it seemed like the smartphone lost its edge. It did not feel as quick or as snappy as it felt in the first few days. The device did not stutter as such, but it seemed to have lost a bit of its fluency with time. 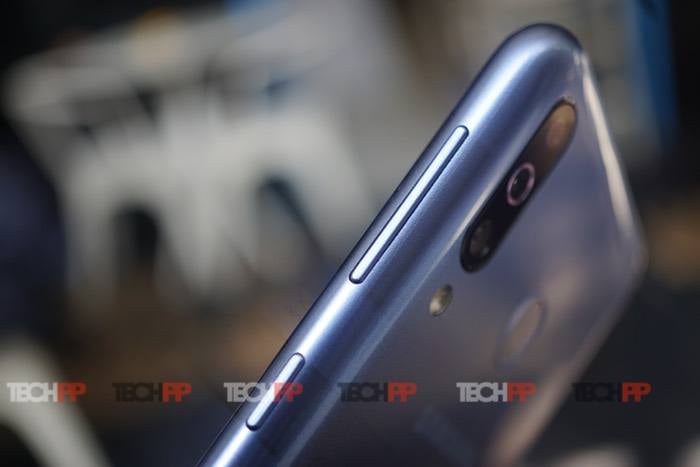 That said, the smartphone did pretty well in the gaming department. Casual games like Temple Run 2 and The Spearman ran smoothly on the phone. High-end ones like PUBG and Asphalt Xtreme did lag a little, and Asphalt Xtreme even crashed a few times on maxed settings, but the overall experience on the phone was good.

The tall 6.4-inch AMOLED display of the M30 is what takes the smartphone and gaming experience on the device up a notch. The display is definitely one of the best in terms of color reproduction and contrasts that we have seen in this price segment. It is responsive and can stand tall and bright against harsh sun. In the sound department, the smartphone comes with support for Dolby Atmos but only for headphones. The loud speaker’s performance is not too impressive as the audio output seemed very flat and was not too loud either, which is a bit of a letdown, especially when you consider the excellent display experience. 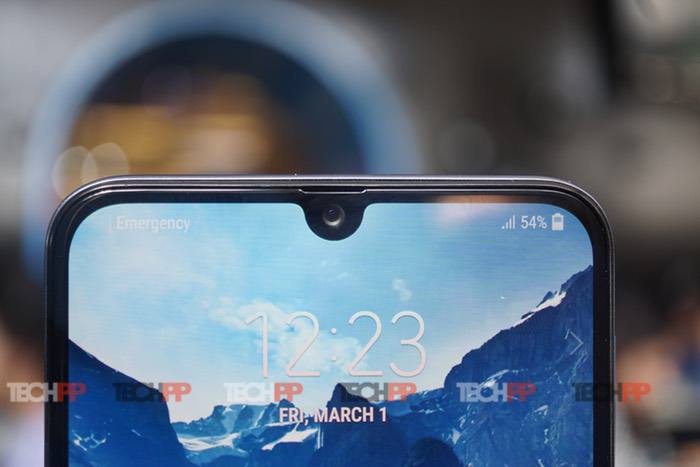 To keep your phone secure, the device offers you a fingerprint scanner on the back and face unlock as well. The fingerprint scanner is pretty swift and accurate whereas the same cannot be said about the face unlock, which takes about a second to unlock and even unlocks the smartphone with the user’s eyes closed, which can be a little problematic.

Most smartphones under Rs. 15,000 umbrella come with dual cameras, but the M30 brings a triple camera setup to the table for the price, which much like the AMOLED display, is not only a rarity but also one of the USPs of the device. The primary camera setup on the M30 houses a 13-megapixel main sensor with f/1.9 aperture and PDAF, a 5-megapixel ultrawide-angle lens and a 5-megapixel sensor for depth analysis, both of which come with f/2.2 aperture. There is a 16-megapixel shooter with f/2.0 aperture on the front for selfies and video calls. 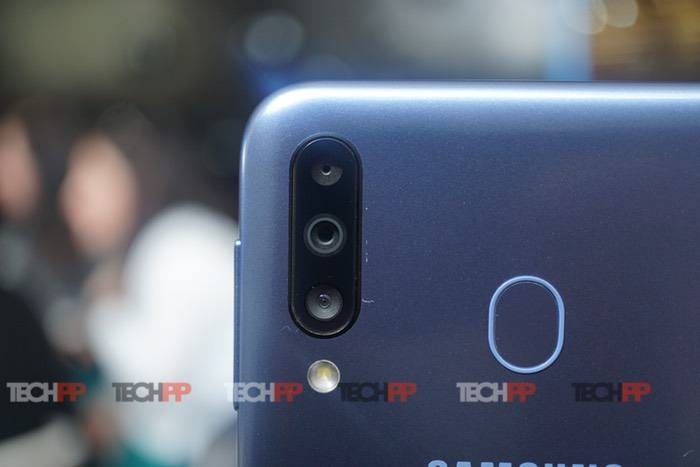 The M30 is backed by triple cameras, and unlike some smartphones where a number of cameras do not really add much value to the result, all three cameras on the M30 were getting the job done most of the time. The main sensor which captures the most information including color and detail for a shot and performed well in both departments. We were amazed by the amount of detail the smartphone was able to capture in most of the shots, especially while taking macros. The colors produced were a bit oversaturated as compared to real ones but the camera did not stray too far away from them.

The two secondary cameras on the back also add a lot of value to the primary camera setup. You can switch from normal to wide angle with a small tap on the multiple tree-like icon on the viewfinder and the instant you do, the camera will change the viewing angle on your smartphone and collect the data for a wider picture. The second 5-megapixel camera collects information for the depth of field which adds bokeh your pictures. The camera produces deep bokeh in macro modes and if you want some bokeh in portrait shots then you can turn on the Live Focus feature on the app, adjust your distance from your subject and take pictures with good bokeh. The feature works really well and highlights the subject in the foreground and separates it clearly from the background. The real Achilles’ Heel of the primary camera on the M30 is its low light performance. It struggles to capture good detail in low light and the shots often turn out to be either grainy or out of focus. 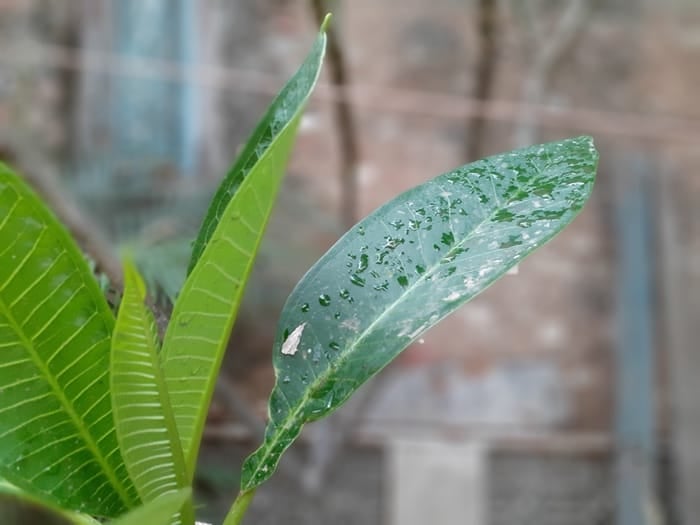 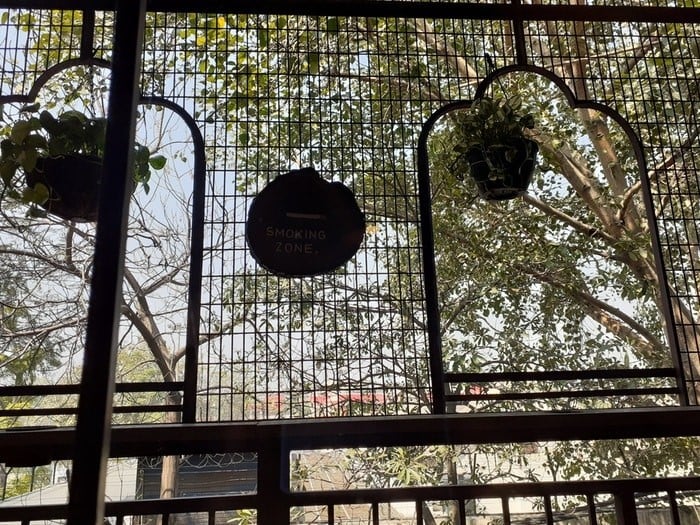 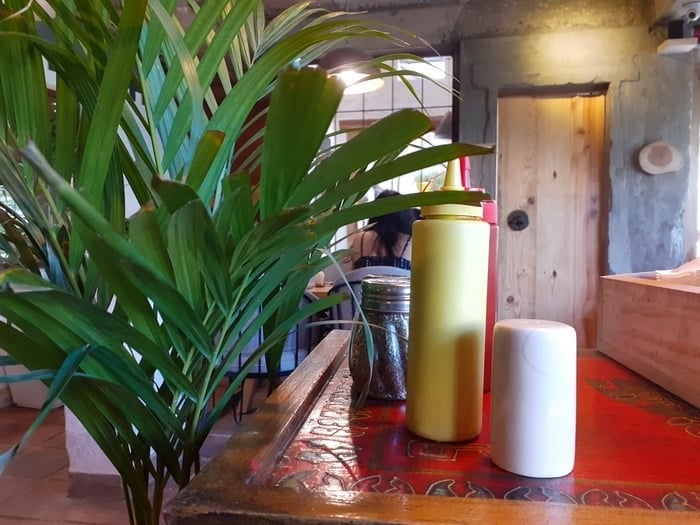 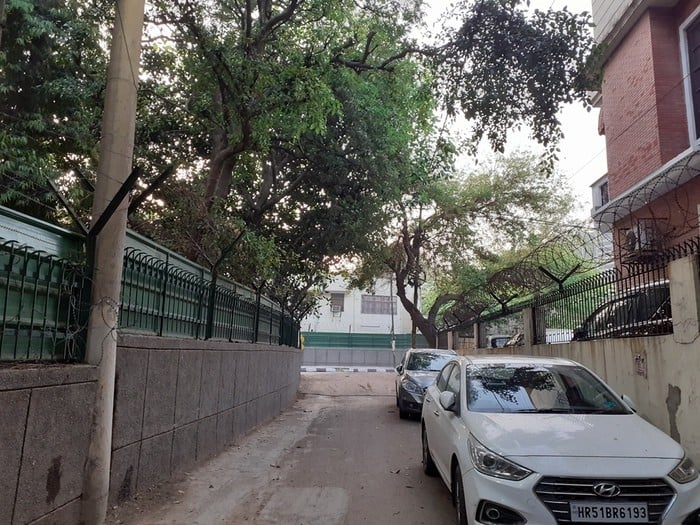 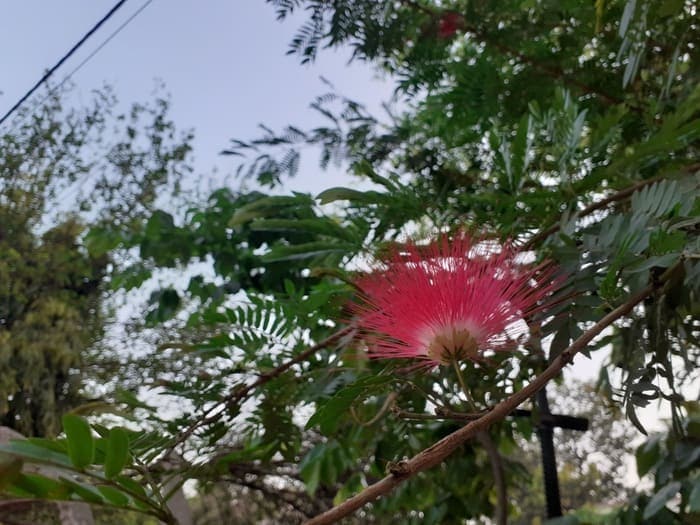 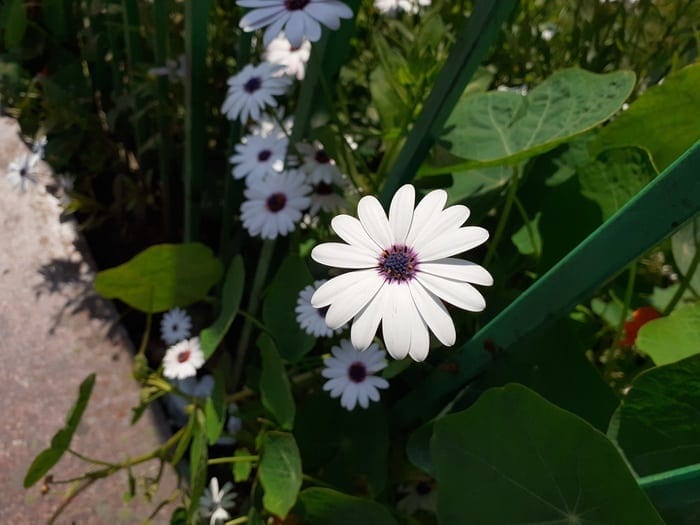 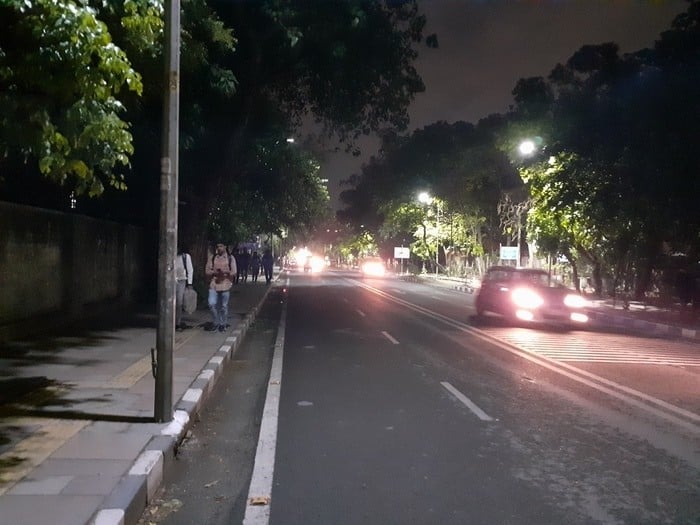 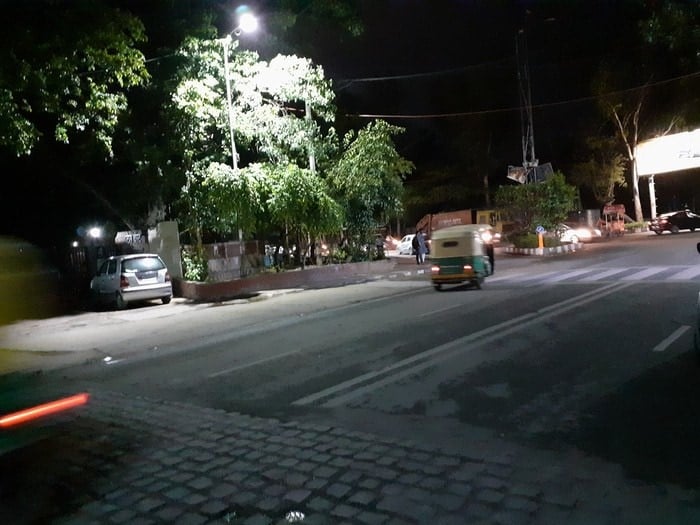 The front-facing camera on the device is not really as good as the rear cameras in terms of detail or color. It smoothens the face out even without the beauty mode on colors seemed to be a little flat and were actually not very close to reality. But the good thing about the front camera is that it comes with a bunch of modes like the rear cameras with different filters and Live Focus and AR stickers.

High numbers, not so high hours

Along with packing a great display and good camera setup, the M30 is powered by a massive 5,000 mAh battery. Given that number, we had great expectations from the battery of the device. Unfortunately, the M30 does not really live up to the grand number of mAhs it comes with. Blame it on the tall AMOLED display or some other innards the smartphone possesses, but the device could only see a day of heavy usage, which was a little disappointing, especially when smartphones with smaller batteries have lasted longer than this (hint: Note 7 Pro). But to make up for the not-so-great battery performance, the smartphone brings fast charging to the table, which gives you battery worth a couple of hours of usage in 15-20 minutes. 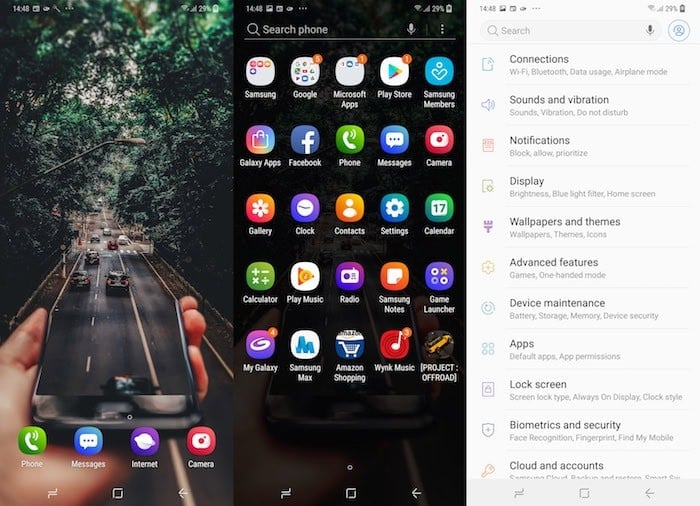 When it comes to UI, the M30 is serving you a rather stale piece from the Android dessert bar. The phone comes with Android Oreo 8.1.0 out of the box with a layer of Samsung’s in house ExperienceOS 9.5 on top. Frankly, it is a bit disappointing that Samsung is launching new smartphones with a version old Android UI as Android Pie has been around for so long now.

That said, the interface is generally clean and uncluttered. Yes, there are several third-party apps that come pre-installed on the phone, but they are managed and grouped well. Unlike most UIs that take a bit of getting used to, the Samsung ExperienceOS 9.5 is pretty easy going in that regard and catches up on you very quickly, which we think is a massive plus. That said, we wonder if it had anything to do with the device getting slightly slower over time. Connectivity options on the device include USB Type C port, 4G, Wi-Fi, Bluetooth, GPS.

One of the best in its segment 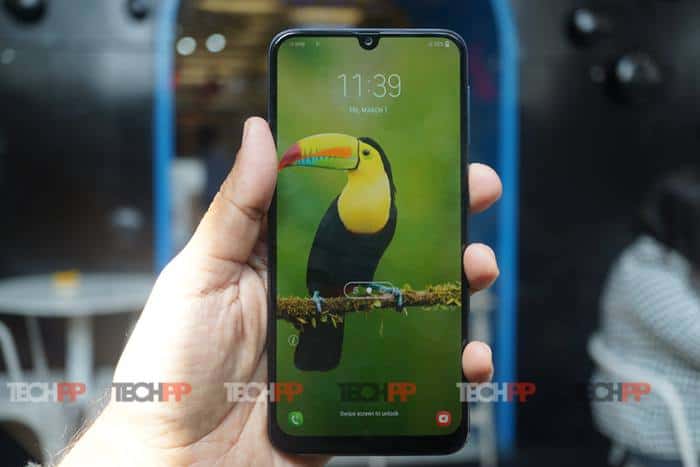 Priced at Rs. 14,990 for the 4 GB/ 64 GB variant and Rs. 17,990 for the 6 GB/ 128 GB variant, the Samsung Galaxy M30 packs quite a bit of punch of spec sheet numbers and features for the price. Yes, it faces a lot of heat from the Xiaomi Redmi Note 7 Pro, which is the M30’s biggest competitors in the market right now, but the Galaxy M30 itself has got a few very neat tricks in the bag to give Xiaomi a headache to deal with. The device comes with a great display, good cameras and decent UI and battery, all of which make the Samsung Galaxy M30 a very worthy contender in its segment. It may not be right on top of the sub Rs. 15,000, but is definitely one of the best in the price range.

Review Overview
Was this article helpful?
YesNo
TechPP is supported by our audience. We may earn affiliate commissions from buying links on this site.
Read Next
Samsung Galaxy Unpacked 2023: Galaxy S23 Ultra with 200MP, Galaxy Book 3 with...
#review #samsung #Samsung Galaxy M30