Realme 5 Review: Trying to put Mi in the Red?

Scoring on value for money…again

There is a Pathan saying that a person’s stature is determined by who his enemies are. Going by that definition, relative newcomer Realme is something to reckon with. In slightly more than a year in the Indian market, the former Oppo sub-brand (it is its own lord and master now) has become one of the top five smartphone brands in the country. And one of the reasons of its success is the fact that it is perhaps the only brand out there that has managed to replicate the “value for money” formula of the brand that is leading the charts: Xiaomi. Whatever accusation can be leveled against a Realme phone, being overpriced is seldom one of them.

The Realme 5 follows in that tradition. Some feel that the device was targeted squarely at the Mi A3 which Xiaomi has launched today. And with good reason. The two devices were launched within a day of each other. And there is no getting away from some of the similarities – the slightly edgy design, the 720p display, the multiple cameras, the big battery and of course, that processor. But comparing those two phones is another story – and one which we are doing! This story, on the other hand, is purely about the Realme 5.

Great specs for not too many bucks 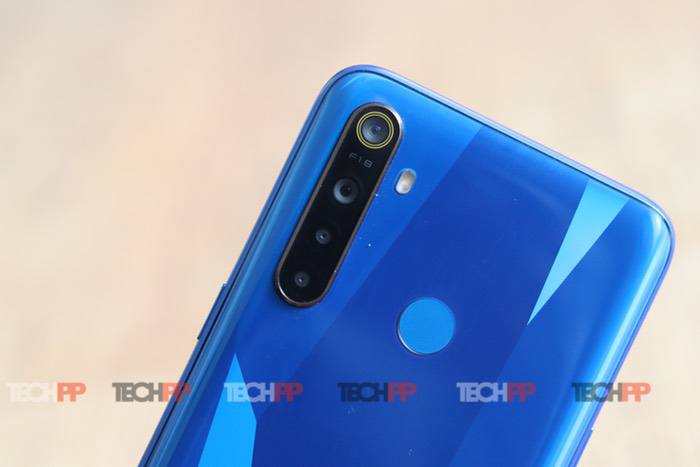 And seen in (Redmi-less) isolation as well, the Realme 5 is a staggeringly good value for a surprisingly affordable price. Perhaps the biggest ace it has up its sleeve is the Qualcomm Snapdragon 665 processor, which is not seen in many devices and is a clear notch above the Snapdragon 660 (check our comparison here), paired with 3 GB or 4 GB of RAM depending on the variant you pick and storage going up to 128 GB (there are three variants : 3 GB/ 32 GB, 4 GB/ 64 GB and 4 GB/ 128 GB), which is expandable using a microSD card, for which there is a dedicated slot.

And hot on the heels of that processor in terms of consumer attraction are the four cameras on the back – a 12-megapixel main sensor with f/1.8 aperture, an 8-megapixel ultra-wide sensor, a 2-megapixel macro sensor, and a 2-megapixel portrait mode sensor. Right in front is a 13-megapixel selfie camera. Need more spectacular spec stuff? There’s a 5000 mAh battery (although with no fast charging) to make sure all this works smoothly for a while. And of course, onboard are all the connectivity options you would want in a mid-segment device – 4G, Wi-Fi, GPS, and Bluetooth.

If there is a slight spanner in the works, it is the 6.5-inch display, which while being a marked improvement over the slightly dull one on the Realme 3, remains stuck at HD+. That might be acceptable to an extent on its base model but really seems a little out of sync in the higher-priced ones, given the fact that you can get full HD+ displays in this segment now. Some might also quibble a little about the micro-USB port rather than a USB Type C, but all said and done, the Realme 5 ticks most hardware boxes. Thoroughly.

It’s got the looks as well 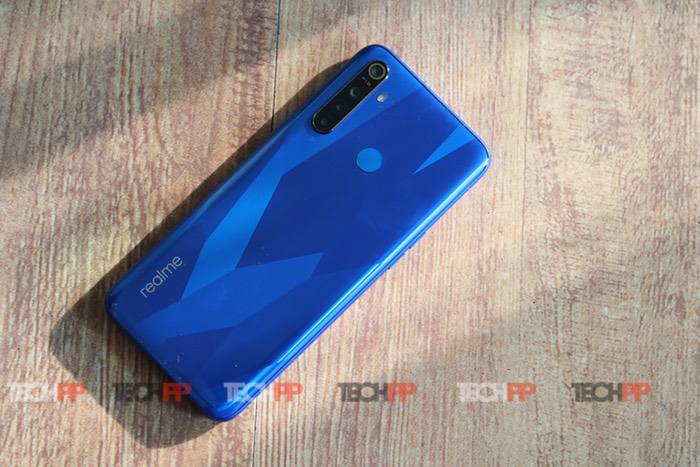 And if it can lay claim to being a spec monster, it definitely can send its candidature for being a mobile beauty as well. Yes, it could lose a bit of weight (198 grams is kinda hefty) and it is a bit on the larger side (it is actually taller than an iPhone XS Max) making it as two-handed as a Rafael Nadal backhand, but all said and done, it remains a head-turner.

Realme deserves a round of applause for its innovative diamond-cut design on the back, which came like a breath of fresh air in a segment done to death by glossy backs and gradients, and this diamond cut is very much present on the back of the Realme 5. We got the Crystal Blue variant and while some might turn up their noses at the carbonate back, we think it looks stunning, especially with the light reflecting off it, making different parts of it look light or dark. Yes, it will pick up smudges very fast indeed, and it is a pity that you will need a case to cover that back (there’s a transparent one in the box) but take it from us, this is a very good looking phone. And it is splash resistant too!

And it works, Real(me)ly well! 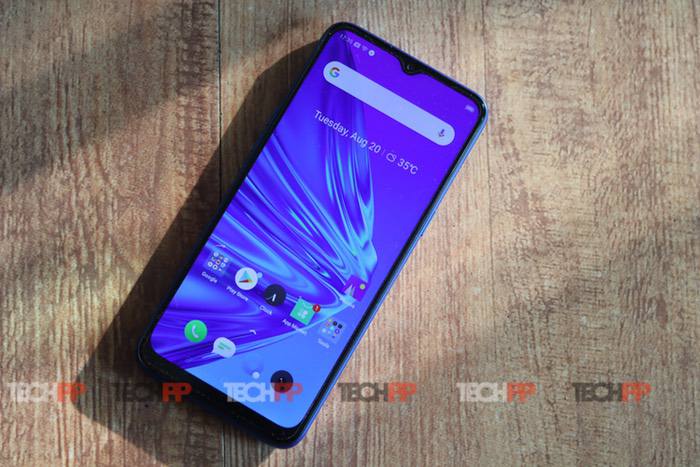 Of course, all the specs and spectacular looks are of little good if not backed up by performance and the Realme 5 delivers on this front. Yes, we will admit that we are not the greatest admirers of Oppo’s Color OS which runs on top of Android 9 on the device, but it works smoothly. Realme says that it has tried to take inspiration from stock Android and keep clutter at a minimum. It is a nice line, but unfortunately, a look at the phone reveals otherwise. Our unit came with a number of apps pre-installed on it, and while there are some changes to the interface (the icons are more rounded, for instance), we still think it is on the complex side. That said, one can get used to it and most importantly of all, it ran smoothly on our unit, which was a 4 GB/128 GB variant. 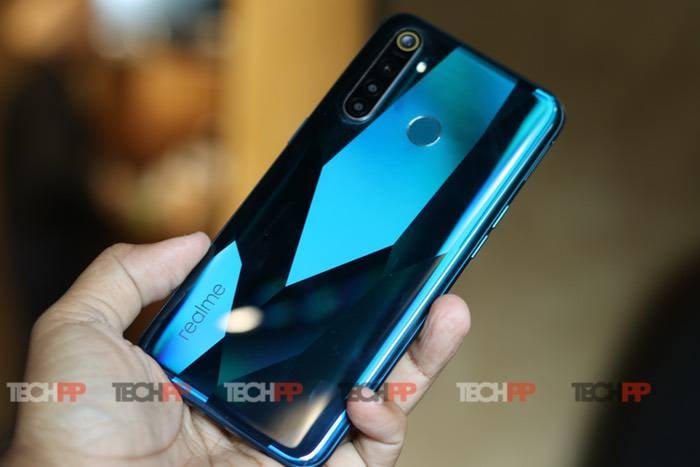 [First Cut] Realme 5 Pro: Dare to take on the Note and the X?
Read More

The result is a device that handled routine tasks very smoothly indeed. From browsing the web to checking social networks to playing casual games like Subway Surfer and Candy Crush to endless messaging and emailing bouts, the Realme 5 handled them all smoothly. It even gave us a decent-ish PUBG experience, and while we did notice a few frame drops in heavy-duty games like the Asphalt series, the experience was still a whole lot better than on some phones which come with heftier price tags. Does that low-resolution display affect your experience? Yes, it does but only if you are looking out for it – the fonts will look a little jagged at times and you do get lesser content in a screenful than you would on a full HD display on some apps and pages. Most users are unlikely to notice the difference. 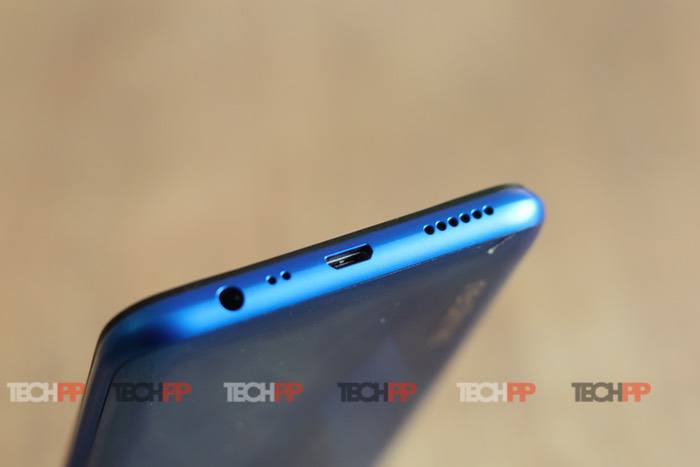 Sound was loud enough, although it sometimes showed signs of cracking at higher levels. Our suggestion: use that 3.5 mm audio jack for earphones, over which everything sounds so much better. The fingerprint scanner on the back was a little quirky sometimes but was lightning fast when it worked and honestly, we still find it a better option than the relatively slow in-display scanners. There is face recognition on board too and it works well enough, but you are warned that it is not very secure and can be fooled, so user discretion is advised (all too common at this and higher price points, alas).

Forget the megapixel count, these snappers are snappy! 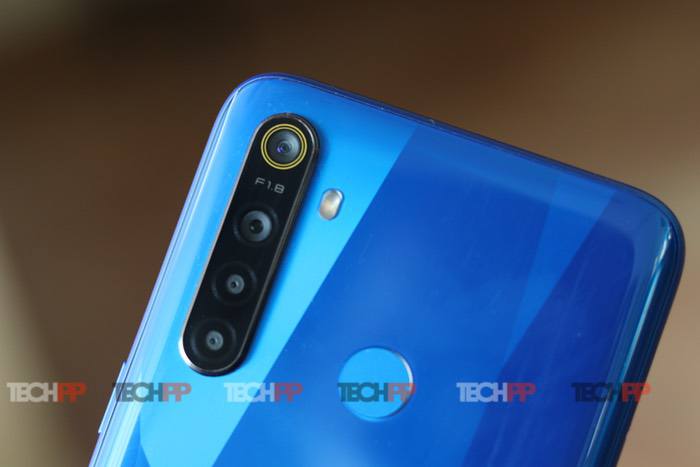 We seem to be headed for another round of megapixel wars, with Realme itself set to be an active participant. Well, devices like the Realme 5 make you wonder if those pixels in cameras are as mega important as manufacturers would have us believe. For, the Realme 5 does deliver some very good photography. We sometimes got shots that seemed slightly oversaturated but for the most part, the camera(s) delivered very good detail and reasonably accurate colors. Although the ultra-wide zoom does cover more area, we would really advocate sticking with the main sensor, simply because results seemed better. Close-ups, however, were a bit of a mixed bag, with the camera’s focus going for a walk in other directions at times. 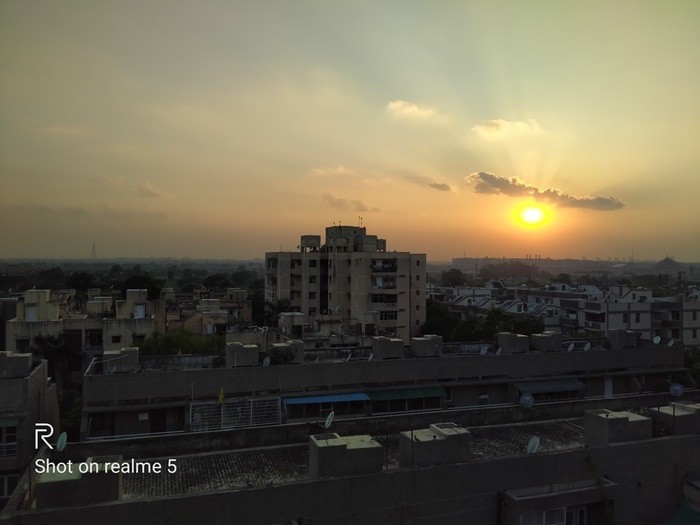 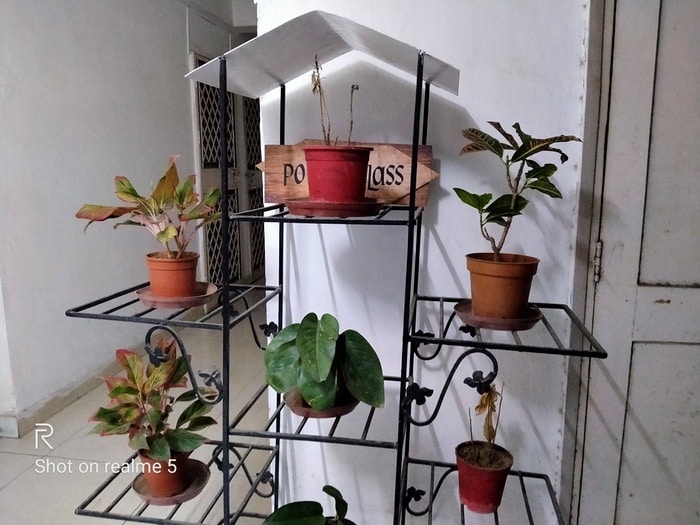 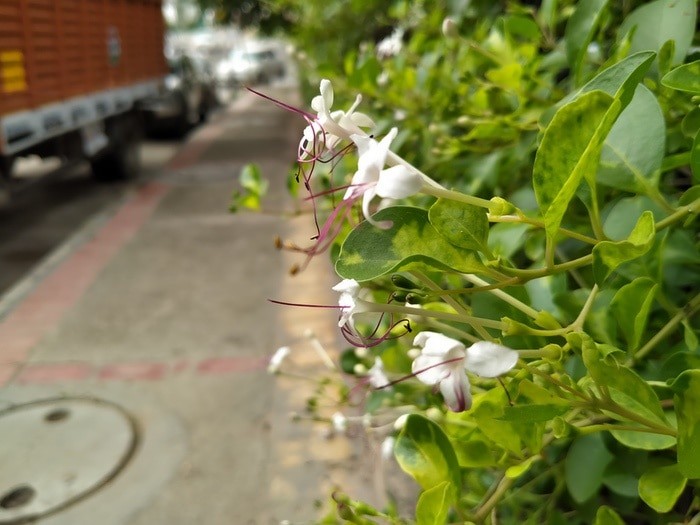 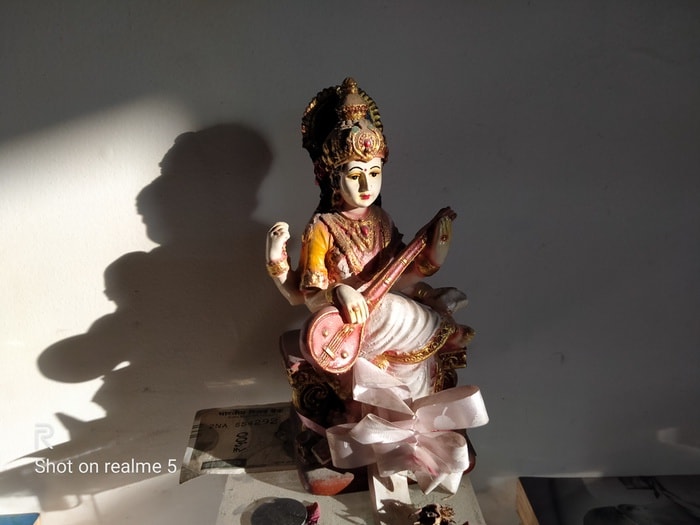 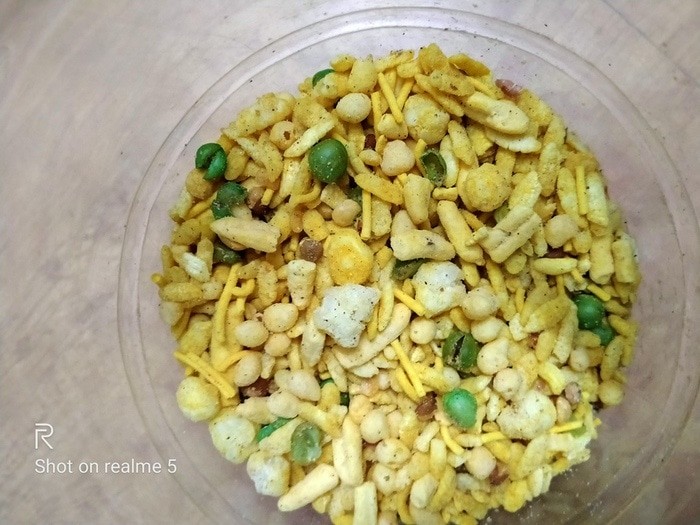 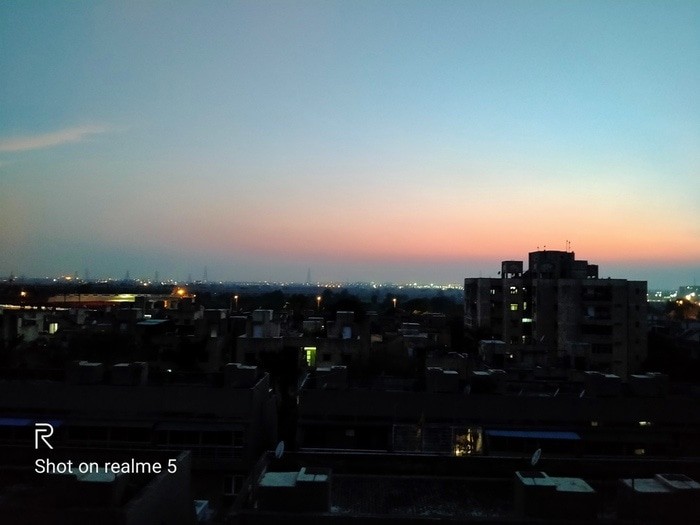 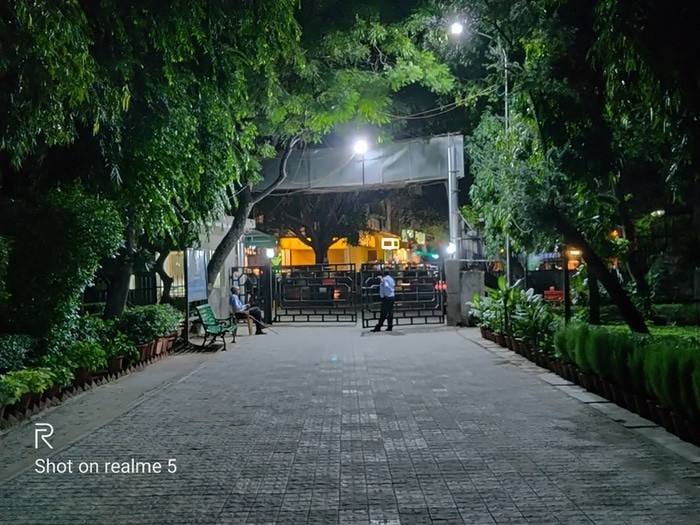 There is an ultra macro mode on the camera app but you need to scroll to get to it, which might make some overlook it. The portrait sensor also did reasonably rather than outstandingly, often missing edges, which is not really a dealbreaker at this price point but makes you wonder about the whole purpose of having four sensors. It gets you spec brownie points, but in performance terms, it is still the main sensor that does the heavy lifting. And does it brilliantly too! When it comes to the front camera, selfies are aggressively smoothened even when you turn the beauty mode off, but then we do not think too many will complain. Video is decent on both front and rear cameras. All in all, the camera remains a star performer, in best Realme tradition. 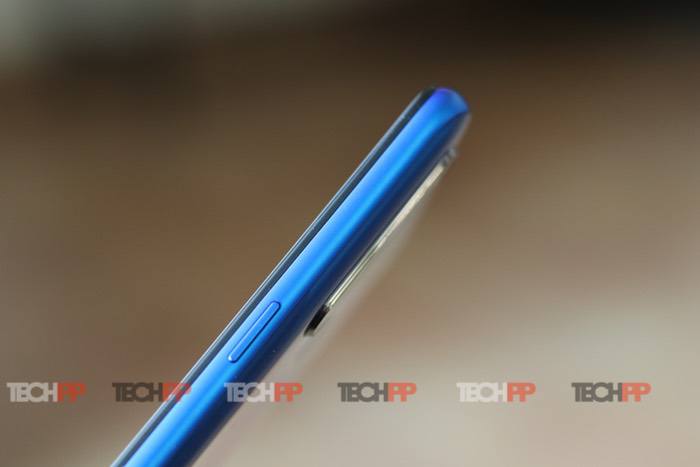 This is a candidate for the shortest paragraph below a heading. But the Realme 5’s battery does merit it. The 5000 mAh is not a paper tiger. Yes, it takes three hours and a bit to charge fully (you do miss fast charging), but once charged, it will keep you running for two days of normal usage and can even get you into a third day with careful handling. We have been accustomed to phones that can get you into a second day at this price point, but ones that get you into the third day are a rarity. Not having a full HD display helps, we guess.

All that at a price that starts at Rs 9,999 for the 3 GB/ 32 GB variant, and goes up to Rs 11,999 for the 4 GB / 128 GB variant, with the 4 GB/ 64 GB one taking the middle ground at Rs 10,999. Some will complain about the less than full HD display and the micro USB port (minus fast charging), but factor in those cameras, that processor, that design and that battery life, and just how well they all perform together, and the Realme 5 emerges as a very worthy candidate for one of the best phones you can get for about Rs 10,000.

Which is not to say that it does not face stiff competition. We have already spoken of the Mi A3 which starts at Rs 12,999 and comes with the same processor, albeit with a higher megapixel count on the main sensor (and one fewer camera) and an AMOLED display. Well, there is also the Redmi Note 7S, which has a slightly older processor but packs in some serious camera muscle and good design. Will the Realme 5 put those worthies in the Red (mi)? We will be making comparisons, lots of them, in the coming days. Stay tuned. But as of now, we can definitely say that the Realme 5 adds a new chapter to the Realme-Redmi wars. And if that does not tell you something, nothing will!