The Redmi Note 7 gets some serious megapixels 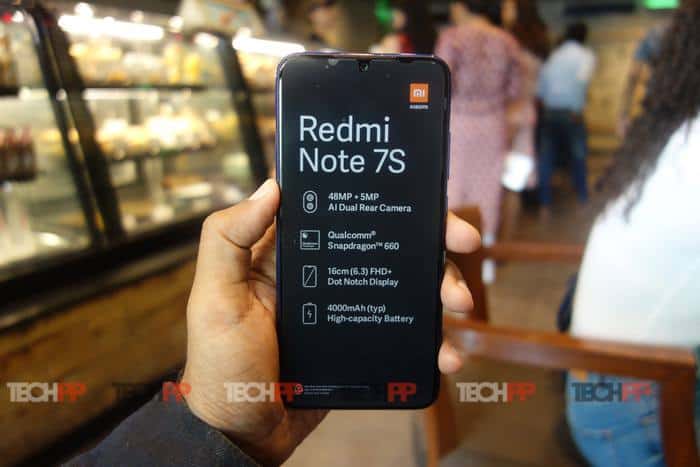 Mind you in terms of appearance, it is closer to the Redmi Note 7 than its Pro avatar, even though all three phones share EXACTLY the same dimensions – 159.21 mm in length, 8.1 mm thin and 75.21 mm wide – and even have the same weight of 186 grams! As an aside, we cannot remember the last time when we had three different devices with the exact same proportions and weight. And yes, it has the same Corning Glass 5 front and back that its predecessors did. But what tilts it more towards the Redmi Note 7 side in design terms are the colors – the 7S does not have the gradient finish that is seen on the Pro range, but comes with the same Onyx Black, Sapphire Blue and Ruby Red color variants that are seen in the Note 7. Is that a bad thing? We do not think so. The phone looks premium and reasonably stylish, and while it is a little on the heavier side, we can see people flaunting the red and blue variants in particular. There is also a clear case in the box to save the glassy frame from smudges and scratches – and it will pick them up over time, so we advocate using it from the word go.

It is not just the colors that bind the Note 7S more to the Note 7. Even its hardware is basically what we saw in the Note 7 – the 6.3-inch full HD+ display with a drop notch, a large 4000 mAH battery with support for Quick Charge 4 (although not with a charger that supports in the box), a 3.5 mm audio jack, the usual connectivity suspects (4G, Wi-Fi, Bluetooth, Infrared), dual SIM connectivity with a hybrid SIM card slot which can be used for a memory card, and most notably (pun intended) the Qualcomm Snapdragon 660 processor and two RAM and storage variants of 3 GB/ 32 GB and 4 GB/ 64 GB. The Redmi Note 7 Pro shared most of these specs but had a Qualcomm Snapdragon 675 processor and 4 GB/ 64 GB and 6 GB/ 128 GB RAM and storage variants. The Note 7S might not be in the league of its Pro cousin in terms of pure hardware, but it is not a pushover either. The display is a very good one, the battery excellent and while it is on the older side, the Snapdragon 660 is a very good processor – it was the power behind the superb Mi A2 and the Nokia 7 Plus. All this is topped off with Android Pie with an MIUI layering. And then there is…ah… 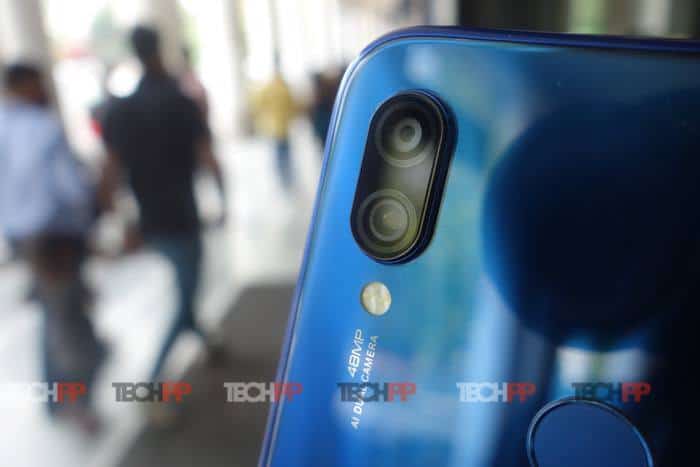 Yeah, we left them for last. Them megapixel laden cameras. Or rather, camera. For, the biggest attraction of the Redmi Note 7S is likely to be the 48-megapixel camera on its back, accompanied by a 5-megapixel depth sensor. Xiaomi had surprised everyone by including the Sony IMX 586 sensor in the Redmi Note 7 Pro when most people had been expecting it to feature the Samsung GM1 sensor. Well, the Note 7S has the GM1 sensor. And for all the controversy around it (some insist it is not a “real” 48-megapixel sensor), the fact is that it can and does deliver 48-megapixel shots, although, like its Pro cousin, it is set to deliver super detailed 12-megapixel shots by default. There is no 4K video here though there is 120 FPS slow motion and EIS. Judging by all reports, the Samsung GM1 is not quite in the league of the Sony IMX586 (which is the choice of many premium players as well, including the OnePlus 7 and 7 Pro), but that does not make it a bad camera either. We will report on exactly how it performs in our detailed review, but on paper, it is certainly not a bad option, especially as they come with a number of AI touches and software tweaks. The front-facing camera remains a 13.0-megapixel one, and similar to the one seen on the other devices in the series. As in the case of the other hardware, the camera represents a slight step down from the Pro series, but it remains a formidable proposition in its own right, especially at its price point. Speaking of which…

And finally, them Note prices 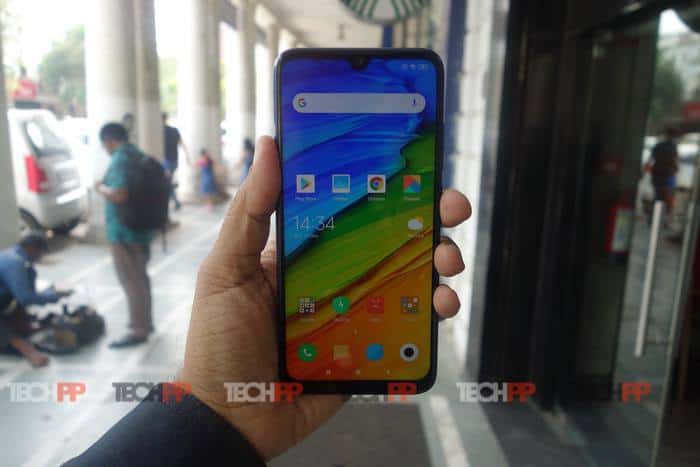 All the talk of a slightly older processor and perceived to be inferior sensor dies down in the face of the pricing of the Redmi Note 7S. For, at Rs 10,999 for the 3 GB/ 32 GB variant, it is literally in a zone of its own, and is in danger of cannibalizing its own Redmi Note 7, which starts at Rs 9,999. That said, the Rs 12,999 for the 4 GB/ 64 GB variant puts it uncomfortably close to the Rs 13,999 starting price of the Redmi Note 7 Pro. But that is another story (and one which we are writing, relax!). As of now, it is too early to speak in terms of performance, but there is no doubt that at its starting price and hardware, the Redmi Note 7S does indeed make 48 megapixels accessible to a wide swathe of people. And gives yet another headache to competing devices, some of which are its own siblings. Quite a Note-worthy family this. The opposition would do well to take Notes, just as we are. In terms of Note-ability…(“That will do, Nimish. Now say ‘Pun intended.’” – Editor.)

Oh all right, pun intended. Stay tuned for our review.