The term “SmartWatch” seems to be getting diluted as brands are giving a fitness tracker encased in a larger body the same moniker as something more sophisticated like the Apple Watch or a WearOS smartwatch. The Lenovo Carme is one such smartwatch that performs basic functions like tracking your steps and displaying notifications. For a price of Rs. 3,499 let’s see if the Lenovo Carme smartwatch is worth your money or if you’re better off getting a traditional fitness tracker. 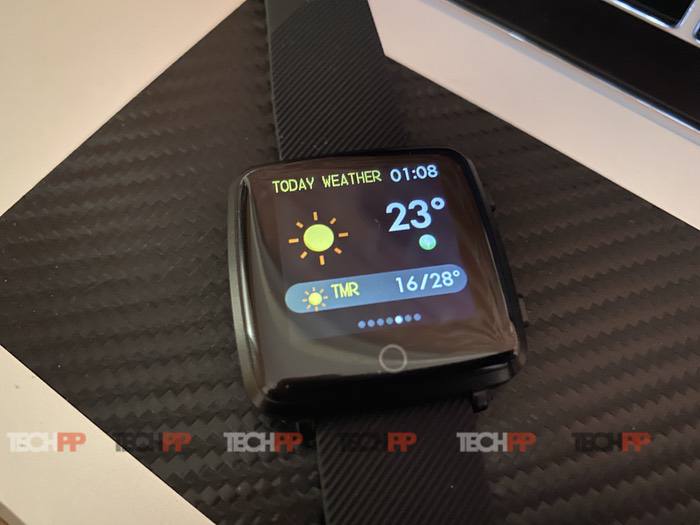 The Lenovo Carme has a predictable design with a rectangular watch face accompanied by a touch-capacitive key beneath the screen. There are two buttons on the side which perform pre-programmed functions like going back or turning the screen off. The build quality of the Carme smartwatch is robust, and the materials used seem to be of high quality. The metallic casing feels good when worn and there is no flex of any sort. While the display itself, which we will talk about next isn’t curved, the portion of glass surrounding the display is 2.5D curved which gives it a good look.

The straps that come pre-installed are made out of rubber/silicon and are comfortable on the skin. They are, however, quite plain to look at but they are interchangeable so you can purchase a separate strap that suits your style. The Lenovo Carme smartwatch has a very functional design, but the look on the front could have been slightly better. The marking for the capacitive button surely gets some negative points. 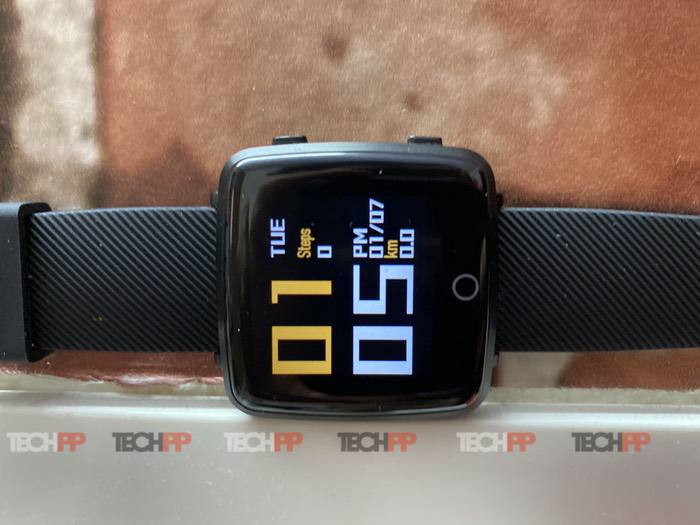 The display on the Lenovo Carme is actually quite large, which is pointless since it is not a touchscreen panel. Yes, that’s right. You have to use the capacitive button beneath the display to interact with the smartwatch which takes away from the experience. The display itself isn’t that sharp but it’s manageable for a smartwatch. Outdoor visibility is poor under direct sunlight. The display itself is rectangular with sharp corners while the border surrounding it is curved. The look of the smartwatch could have been better had the display been rounded too. Wish Lenovo had gone with a touchscreen panel which would improve the experience immensely.

When you turn the display on, you are greeted with the watch face which can be selected from the menu. You only get three options to choose from. Along with the date and time, the watch face also displays your fitness progress for the day in terms of the steps taken, distance walked, and calories burnt. Pressing the touch capacitive key takes you to the menu which you can cycle through. There’s fitness data first up, followed by sleep data, heart rate monitoring, training mode, weather, notifications, and others. The ‘others’ tab has the find phone option followed by the option to select the desired watch face, a stopwatch, an option to mute your phone, reset the watch, power it off, and an option to change the display brightness. 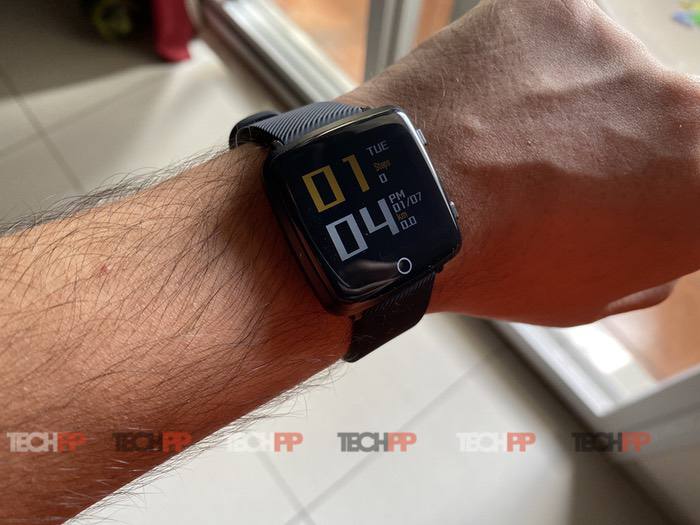 The fitness aspect seemed quite accurate when compared to a Mi Smart Band 4. The heart rate monitoring too was spot on. Sleep data, on the other hand, was not that reliable since it detected the watch resting on a table as my “sleep time”. Notifications from third-party apps are also displayed, but emojis appear as square blocks similar to any other fitness tracker. The functionality is pretty standard and is the same as what you would get on any fitness tracker. There is no additional feature that makes the Carme stand out as a smartwatch.

The UI on the watch is half-baked and the fact that the display is not touch-compatible makes it harder to operate. It takes multiple presses and long presses to get to a menu and when the screen times out, you will have to navigate back to the menu which is annoying. The font throughout the UI is too childish for our liking and the grammar in the menus is not right making it feel cheap. The UI could have been more polished, and the functions of the buttons could have been more distinct. The watch faces too are limited to just 3 which is disappointing. 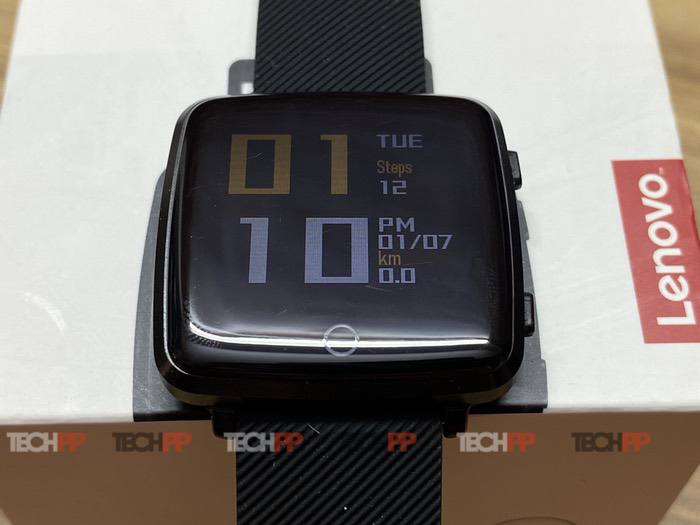 The Lenovo Life app used to pair the smartwatch with your smartphone is good and has all the basic functionality. You can view your stats and change settings of the watch from the app itself. You can also sync your app data with Google Fit which is nice. However, there were frequent disconnections with the app and the app had to be kept running in the background at all times to make sure no notifications were missed. The overall experience is lackluster and could have been much better had Lenovo polished the UI. 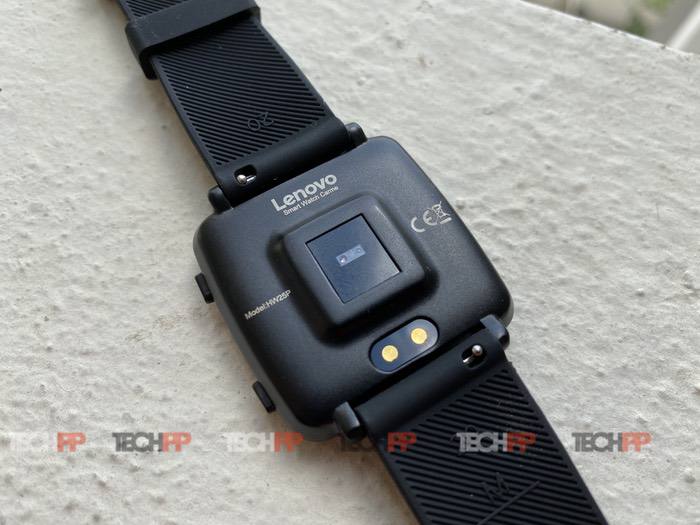 The Lenovo Carme lasted about 4-5 days on a single charge which is acceptable given the big display. The charging time was about two hours which again, is standard. The charger provided within the box is unique and has a clamp that shuts close once the watch is kept inside it. While it doesn’t last as long as some traditional fitness trackers, the battery life is still good.

Should you prefer the Lenovo Carme Smartwatch over Conventional Fitness Trackers? 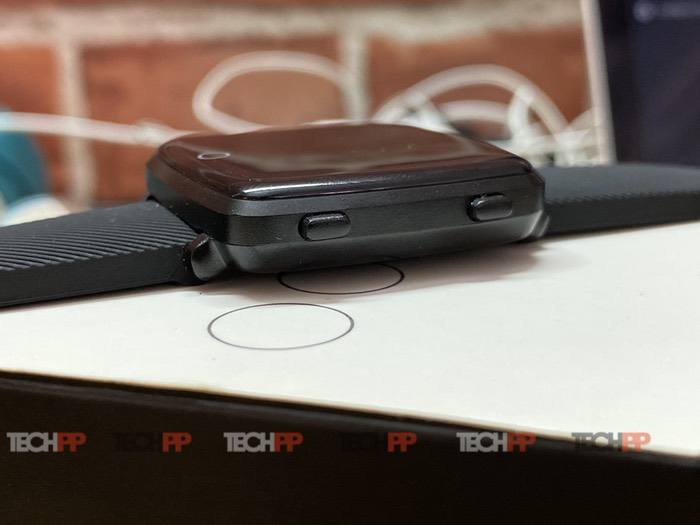 Was this article helpful?
YesNo
TechPP is supported by our audience. We may earn affiliate commissions from buying links on this site.
Read Next
iQOO 11 5G Review: Does It End Your Quest for the Ultimate Smartphone?
#lenovo #Lenovo Carme #review #Smartwatch #wearables