Truly wireless earphones or what commonly is referred to as TWS was popularized by Apple with the AirPods. What followed was every single brand launching its own pair of truly wireless earphones in order to keep up with the trend and stay relevant. While initially, you would have had to pay a premium to own a pair, they are much more accessible now. The Lenovo HT20 is one such pair of earphones that gives you a truly wireless experience without breaking the bank. We have been using them for the past week or so and we will tell you if they are worth the Rs. 3,799 asking price. 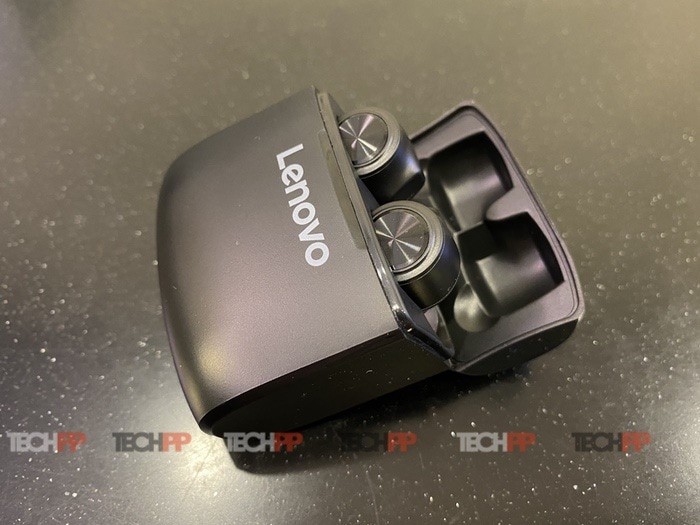 The first impression is the best impression, they say, and that’s unfortunately not in favor of Lenovo HT20. The polycarbonate housing feels rather cheap in the hand and the fact that it doesn’t feel dense isn’t reassuring either. The case is quite bulky and is not easily pocketable. The Lenovo branding boldly sits on the front and with the micro-USB port on the bottom accompanied by four LEDs representing battery status. A micro-USB port in 2020 feels quite dated and Lenovo should have gone with Type-C here. The hinge mechanism looks good though and you can open the lid with a single finger. 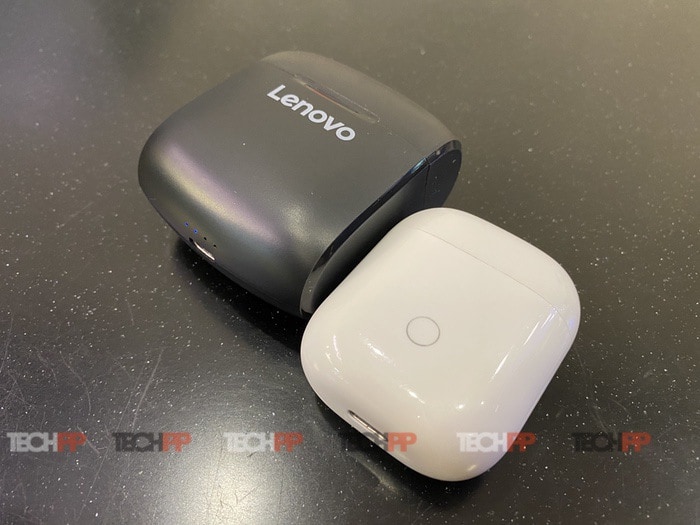 Speaking of the earbuds themselves, they feel much better in terms of construction when compared to the case. The shiny concentric circles also make them look quite good when worn. The earbuds have a long stem design and slot into the case though magnets. The in-ear design ensures a nice fit so you can use the HT20 even while exercising in the gym. They also come with an IPX5 rating for sweat resistance.

While the Lenovo HT20 isn’t made with the best materials, it scores high in terms of sound output which is the primary reason you would be buying these in the first place. Vocals are distinct and the instrument separation is also good. The bass is overpowering to a certain extent if you’re listening to hip-hop or jazz but for the most part, you will enjoy the sound produced by the Lenovo HT20. 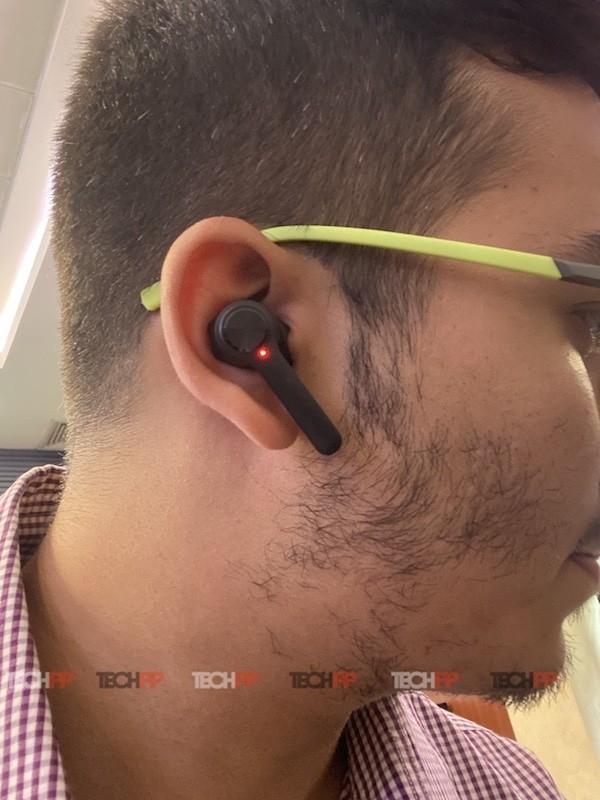 Lenovo seems to have baked in a “Dual EQ” mode into the HT20 which can basically adjust the sound output based on the kind of music you are listening to. In our testing, we did not see any noticeable difference though. Just like various other in-ear headphones we have tested, the Lenovo HT20 also gets a little piercing at high volumes which makes it uncomfortable to use for long durations. If you are going to be using it for a long time at a stretch, we suggest you stick to volume levels below 70%.

While the sound quality is good for listening to music, video playback is where the Lenovo HT20 takes a hit. There is a slight lag/delay, albeit not extremely noticeable. This is the case with the majority of TWS earphones in this price range so we are not complaining much here. There is no active noise cancellation, of course, but the rubber ear tips sit quite well inside the ear and the angled design means they go deep into the ear canal which does cut off a lot of the ambient noise.

Both the earbuds house a touch-sensing panel that you can use to perform the usual tasks like switching tracks, play/pause, accept calls, etc. Speaking about calls, the Lenovo HT20 was good in terms of transmitting the audio from the other party, but the mic onboard isn’t the best as the opposite party complained of a lot of noise and feeble audio. It works well if you’re indoors though. 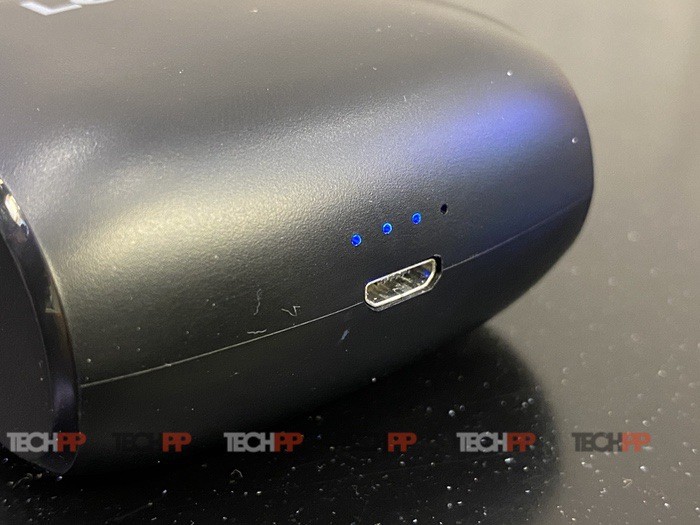 While we complained about the case being bulky in the build and design section, the battery life on the HT20 almost makes up for it. While Lenovo advertises five hours of hearing time on a single charge, we were able to achieve a little short of four hours which isn’t too close to the claimed battery life but is still commendable for a pair of truly wireless earphones at this price point. The case is said to offer 25 hours of extra playback time and while we cannot confirm the exact number, we haven’t charged the case for about five days now and there’s still one LED that glows so looks like those numbers are indeed achievable. 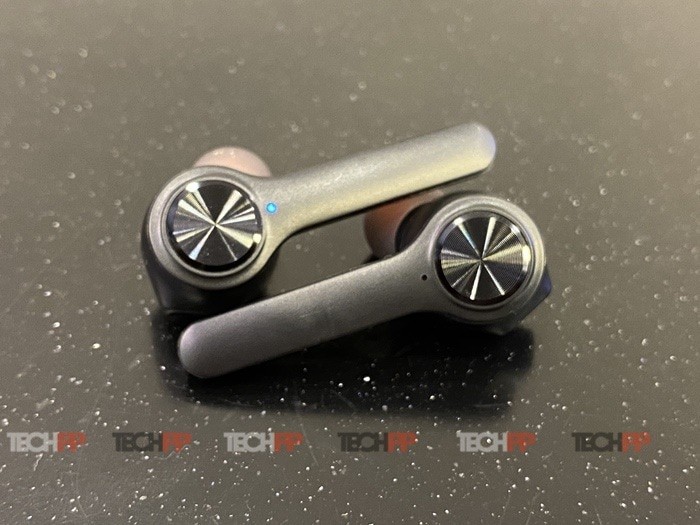 The Lenovo HT20 TWS has god sound quality with a lot of bass and also has a long-lasting battery. Where it falls short though is in terms of the build quality and the ability to take calls outdoors. The case feels rather cheap and is very bulky to carry around in your pocket, two things that the Realme Buds Air, priced at just Rs. 200 more handles very well. The Realme Buds Air also sounds better and has additional functionality like in-ear detection and a low-latency mode for watching videos and gaming, but at the cost of a smaller battery.

This is why the Lenovo HT20 isn’t an automatic recommendation at a price of Rs. 3,799. However, if you are specifically looking for a pair of earphones with the in-ear design, something that the Realme Buds Air lack and you want the additional hour of music playback with thumping bass, you can get the Lenovo HT20.

Review Overview
Was this article helpful?
YesNo
TechPP is supported by our audience. We may earn affiliate commissions from buying links on this site.
Read Next
Skullcandy Mod Review: Betting on doing the basics well
#lenovo #Lenovo HT20 #review #TWS #Wireless Earphones