It has been the first big phone battle of 2020. They slogged it out to be the first 5G phone in India. And now are waging war for being the most affordable flagship. They both come with 5G support and are at the time of writing, the only phones in the country to sport the flagship Qualcomm Snapdragon 865 processor. Both are gaming powerhouses. 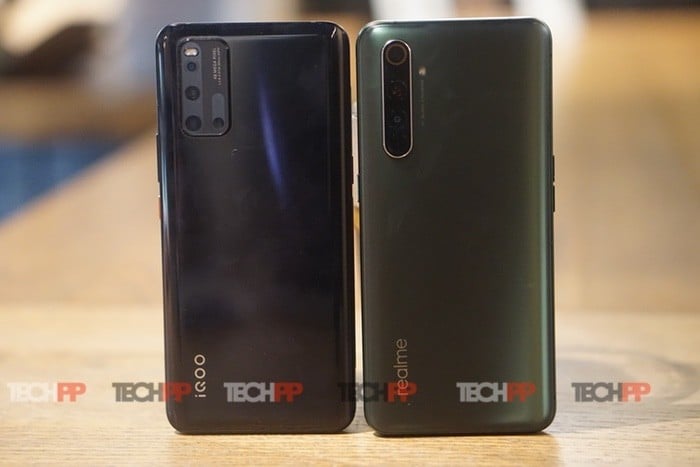 And both come from relatively young brands, one has been in India for less than two years, another that has just made its debut in the market. Indeed, at the time of writing, they are perhaps the best options for anyone looking for a super-powerful phone that does not blow a massive hole in their pockets. But should you go for the iQOO 3 or the Realme X50 Pro? Let’s find out, shall we?

When it comes to design, though both devices sport glass front and backs with a metal frame sandwiched in between with a different colored power/display button for good measure, there is a clear cut winner right out there. Yes, the Realme X50 Pro is easily the most classy design we have seen from Realme (we love the feel of the matte glass back), we think the iQOO 3 just looks way more premium with its subtle gradients. Both phones have a variant that looks slightly different – but here too the Volcano Orange of the iQOO 3 wins over the quieter Rust Red of the Realme X50 Pro. The iQOO 3 is a bit heavier and slightly thicker than the Realme (to be fair, neither phone is super light or slim), but it just looks more distinct. 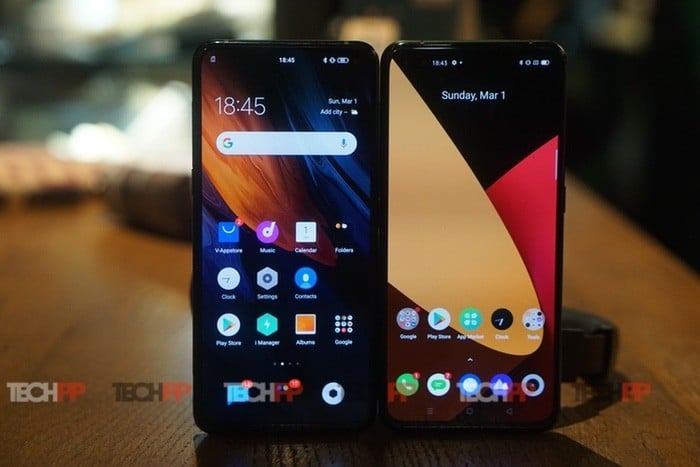 This is a battle between two 6.44-inch Super AMOLED displays with full HD+ resolutions and punch hole notches. And the winner is a surprising one. That is because, on paper, the Realme X50 Pro would seem to have an edge over the iQOO 3 with its 90 Hz refresh rate as compared to 60 Hz on the iQOO 3. However, in terms of real-time usage, we actually found that the iQOO3’s display to be slightly brighter and with richer colors. Some might find the iQOO 3’s display a slight bit more saturated, but it definitely offers a better viewing experience than the Realme X50 Pro. The 90 Hz refresh rate does make a difference while scrolling and perhaps in some games, but we are still going with the iQOO 3 on this one.

Which brings us to the processors driving the two devices. Make that processor, actually. For, both phones are powered by the latest Qualcomm flagship chip, the Snapdragon 865. This is as good as it gets for anyone looking for a high-end processor. And both devices come with it. Obviously, it is a tie here!

Realme X50 Pro vs iQOO 3:…and lots of RAM and storage

Of course, with great processors inevitably come lots of RAM and storage. And while neither the iQOO 3 nor the Realme X50 Pro come with expandable memory, both have plenty of gigabytes on board as far as RAM and storage go. We think the iQOO steals a bit of a march over the Realme here as its base variant is an 8 GB/ 128 GB one while the Realme starts with a 6 GB/ 128 GB variant. Both have top variants of 12 GB/ 256 GB though. The iQOO 3 also uses UFS 3.1 storage as compared to UFS 3.0 on the Realme X50 Pro (Realme claims X50 Pro comes with Turbo Write + HPM technology making it faster than USB 3.1). But for us, it is the base RAM count of 8 GB that wins another round for the iQOO 3. 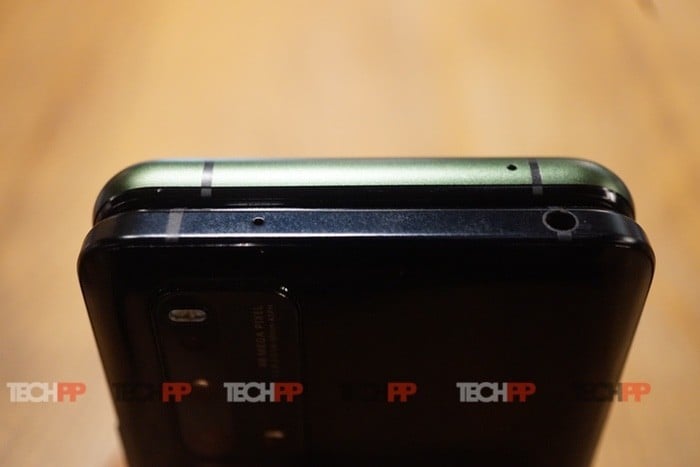 With hardware like that on board, it is hardly surprising that both devices are outstanding when it comes to handling games. Whether it was PUBG or Call of Duty or the Asphalt series, both devices handled them with absolute ease. Yes, the Realme device has a display with a 90 Hz refresh rate, and the iQOO 3 has more RAM in its base variant, but there is no clear difference in performance. The iQOO 3 does have customizable touch buttons and a special Monster gaming mode, but then the Realme wins back some lost ground with its stereo speakers, which are a clear step ahead of the single speaker on the iQOO, although the iQOO does have a 3.5 mm audio jack (the Relalme does not). Some might feel the iQOO is better designed for gaming, but we are calling this one a tie, as we could not spot a discernible difference between the two devices in the gaming department. 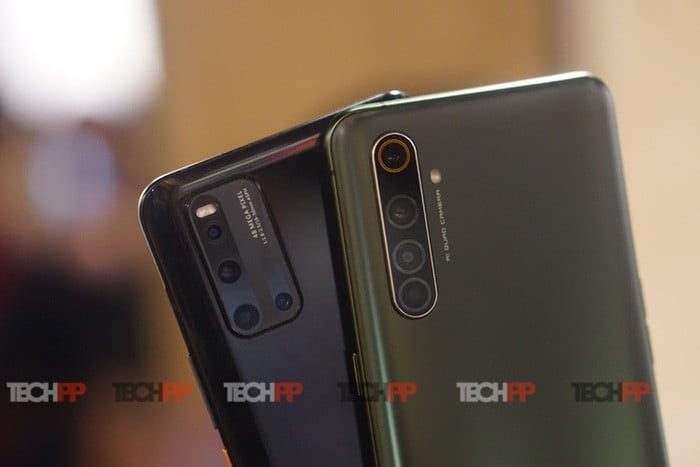 The Realme X50 Pro, on the other hand, comes with a 64 megapixel Samsung GW1 main sensor, a 12-megapixel telephoto camera, and an 8-megapixel ultrawide camera (capable of macro snaps) and a 2-megapixel bokeh camera.

Both camera setups are very good and which one is better is really going to boil down to a matter of personal preference. We felt that the iQOO 3 was capturing much richer colors without erring too much on the side of over-saturation, but the Realme X50 Pro seemed to deliver more detail and handled low light better. The iQOO 3 was much better at macros, but the Realme did videos better. It is an incredibly tight finish, and both phones deliver good results. We are calling this one a tie again.

Both phones have punch hole displays with selfie cameras inside them. However, the edge here is clearly with Realme which has a 32-megapixel main sensor and an 8-megapixel ultrawide sensor inside a dual punch hole, while the iQOO 3 has a single 16-megapixel selfie camera. No, the difference in image quality between the two devices is not as wide as those figures might suggest – both can take decent selfies, and insist on brightening up your skin even when you turn off beauty effects – but there is no doubting that one can do much more with the Realme X50 Pro’s selfie shooters. And that wins Realme its first round of this battle. 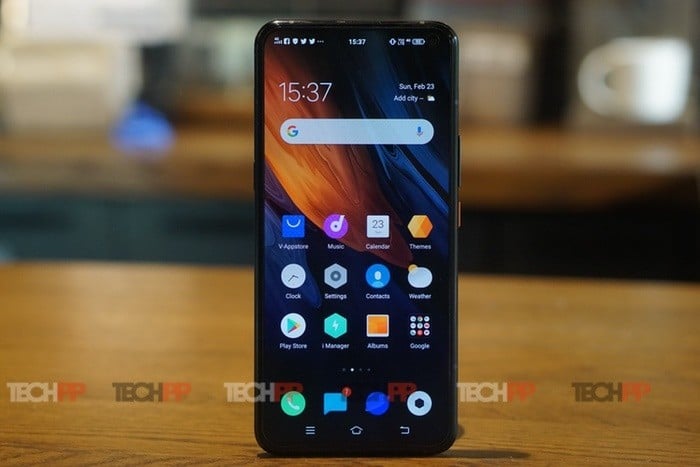 Realme X50 Pro vs iQOO 3: Matters of software and UI

Both phones run on Android 10 with their own custom skins over them. And to their credit, both try to be unobtrusive while adding functionality and features. Which do we prefer, the iQOO Monster UI or the Realme UI? Well, both have their bugs and their promise. But we are going to vote for the latter at the moment as it just brings a little more to the table at the time of writing, and also promises much more mainstream functionality, although gamers might prefer the iQOO one. We are giving this one by a thin margin to the Realme X50 Pro at the time of writing.

When it comes to handling everyday tasks like calls, messaging, social networking and the odd spot of gaming and multimedia, both phones are super performers. We never faced any problems when in the routine territory from either phone. The Realme does score when it comes to watching videos and films, thanks to its dual speakers, but then the iQOO gives you the convenience of a 3.5 mm audio jack, allowing you to connect wired headphones to the device, something missing in the Realme X50 Pro. The iQOO 3’s display does seem a little brighter but then, the Realme itself is slightly thinner and lighter. Another tie here. 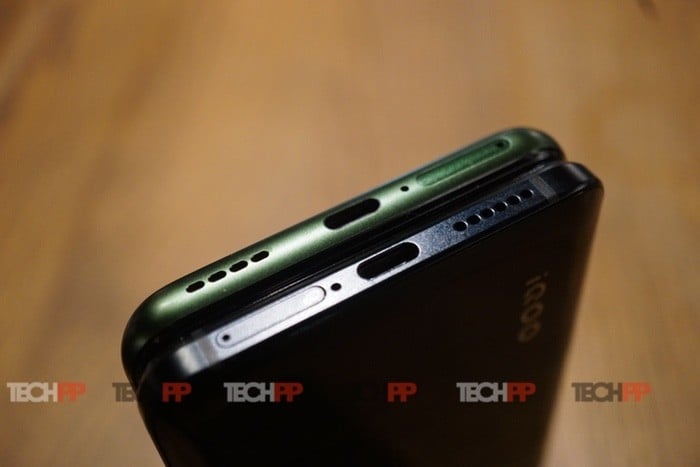 Both phones come with big batteries. And with the option to charge them at super-fast speeds right out of the box. The iQOO 3 comes with a 4400 mAh battery which is a bit larger than the 4200 mAh one on the Realme. And it also manages to last past a day of usage quite comfortably, while the Realme basically gets in about a day’s usage on a single charge (is that higher refresh rate to blame as well?).

But the Realme X50 Pro still wins this round, thanks to its DartCharge. The iQOO 3 comes with and a 55 W charger, with Super Flash technology that can charge 50 percent of the battery in about 15 minutes. But the Realme X50 Pro can get totally charged in about 35 minutes with its 65 W charger with DartCharge. Yes, Realme’s battery does drain a little faster but the difference in charging speeds makes us give this round to the X50 Pro. 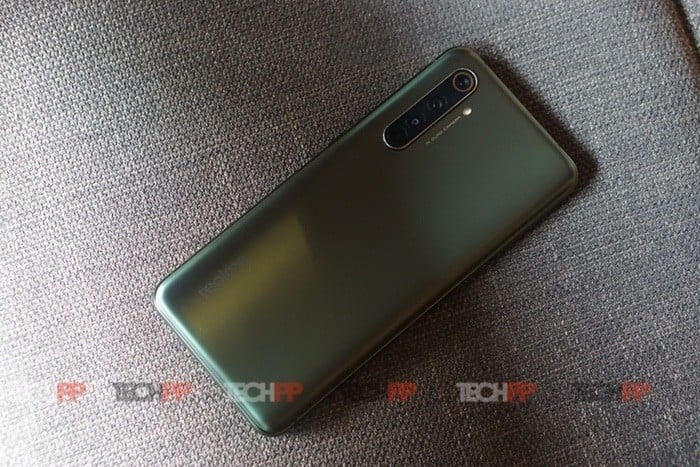 On to the final parameter: the price. And this is a tricky one again. The iQOO 3 would seem to have the edge here when you consider that its base variant starts at Rs 36,990 and comes with 8 GB RAM and 128 GB storage as compared to Rs 37,999 for the Realme X50 Pro, which comes with 6 GB RAM and the same amount of storage.

But a key point to note here is that all variants of the Realme X50 Pro support 5G, while only the top variant of the iQOO 3 does. Is that a major issue, given the fact that 5G is not available in the country as yet? Well, not in our books, but we can see spec and futuristic tech buyers getting influenced by the presence of 5G in the Realme device. We are nevertheless awarding this one to the iQOO 3 for the greater RAM and 3.5 mm audio jack at a lower initial price tag, although we can see the 90 Hz refresh rate and 5G connectivity swaying some users. 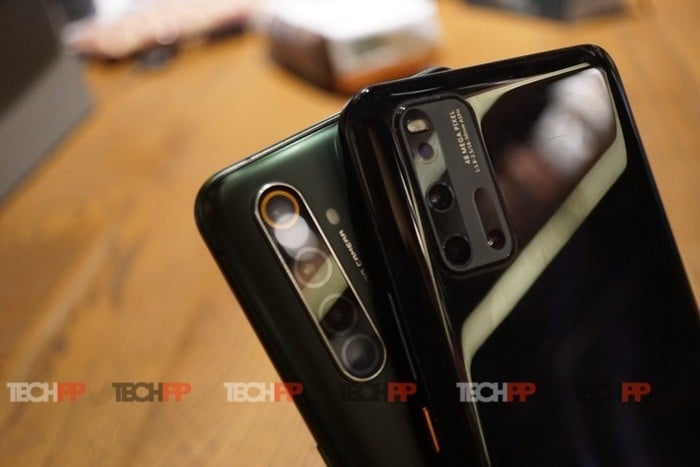 Which brings us to the big decision: which of the two is worth investing in? If you look at the parameters above, some would think that the clear edge is with the iQOO 3, especially as it wins clearly on design, display, and price. However, what needs to keep in mind is that the Realme X50 Pro does not really lose any round by an overwhelming margin and matches the iQOO 3 in terms of camera, gaming, and general performance. Indeed, there are some who might consider the 5G connectivity and 90 Hz refresh rate display of the Realme device to be more futuristic.

It is, as always going to boil down to what you consider important. If what you want is a powerful device with a slight gaming orientation, then the iQOO 3 is perhaps the phone for you. Bring specs and connectivity into the equation and the Realme X50 Pro becomes a contender. The gamers will love the iQOO 3, the geeks we suggest will gravitate towards the Realme X50 Pro. The mainstream user? Well, read the above, and see where your priorities lie. No matter what you choose, it is a fair chance that you will end up with one of the most powerful phones in the country.

Was this article helpful?
YesNo
TechPP is supported by our audience. We may earn affiliate commissions from buying links on this site.
Read Next
Snapdragon 782G vs Snapdragon 778G Plus: What Has Changed?
#comparison #Face Off #iQoo #iQOO 3 #Realme #Realme X50 Pro