Battle of the fast charging technologies

Batteries with large capacities have become a norm across all segments of smartphones nowadays. There was a time when 4000mAh was a number we only heard in the lower and mid-range segments as flagships often skimped out on large batteries to maintain a slim form factor. However, with increasing screen sizes and the onset of 5G which is a battery hog, brands have realized that consumers want more battery life from their smartphones and the fact that a brand like Apple, who used to be extremely conservative with actual capacity and relied mostly on software optimization, has put in a 4000mAh battery on the iPhone 11 Pro Max. 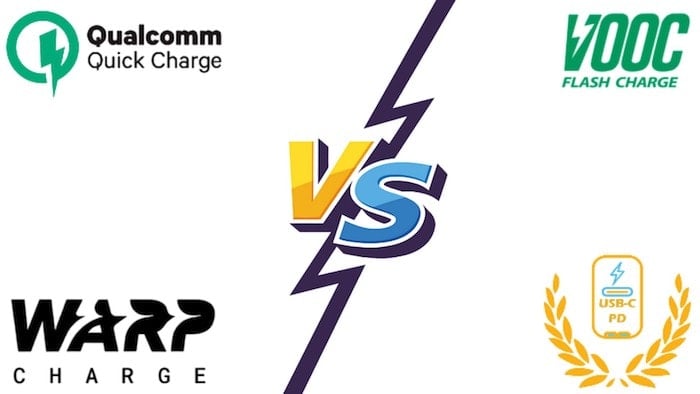 However, as the saying goes, with great power comes great responsibility fast charging capabilities and we’ve seen a number of implementations of it over the years. Qualcomm’s Quick Charge, OnePlus’ Dash Charge which has now been renamed to Warp Charge, Oppo’s VOOC and SuperVOOC which are also used by Realme, and the universal USB-PD used by phones as well as laptops. While all these technologies have one ultimate goal, which is to charge your phone’s battery faster, they all work in very different ways. Let’s understand how each fast-chagrining technique is implemented and try to identify the best one. 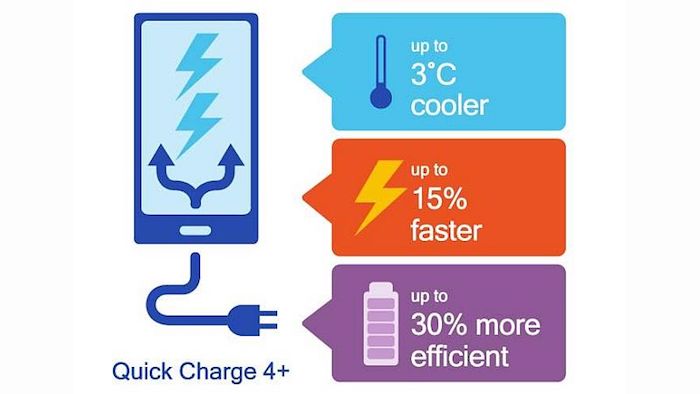 Let’s start with the most common fast charging solution which is Qualcomm’s Quick Charge. The reason Quick Charge is the most common of the lot is that it’s a feature offered by Qualcomm itself, who is the manufacturer of the SoCs found on the majority of the phones. This means that the OEM or the smartphone manufacturer does not have to add any sort of additional hardware, or there’s no requirement for dedicate Research and Development for a dedicated fast charging solution as the chipset itself natively supports it.

All that the smartphone manufacturer has to do to implement Qualcomm Quick Charge is to pay slightly extra for the chipset to have Quick Charge enabled in the power management section. This saves a lot of time and money which would otherwise be required to spend on dedicated R&D for a proprietary fast charging solution. At the time of writing, Quick Charge 4+ is the best possible iteration of Qualcomm Quick Charge which supports charging speeds up to 27W. Quick Charge 3 or more commonly referred to as QC 3.0 is one of the most common standards found on a lot of mid-range smartphones and has support for up to 18W.

There is a common misconception that Quick Charge can only work on phones with Qualcomm’s chipsets but that isn’t the case. The Redmi Note 8 Pro, for example, has the MediaTek Helio G90T chipset but has support for QC 3.0 and that’s because it uses Qualcomm’s power management IC which has the hardware dedicated to QC 3.0.

Also, the advantage with Qualcomm Quick Charge is that any QC compatible charger can be used to fast-charge your smartphone and these can be found easily since the adaptors are not restricted to one brand. Multiple smartphone brands use QC and even third-party manufacturers sell Quick Charge compatible chargers and power banks which makes it all the more convenient. However, the charging speed with QC 3.0 isn’t that fast and QC 4+ is available on very few smartphones, and the fact that using your phone while quick charging slows down the charging process and also increases the battery temperature puts it behind when compared to the competition. 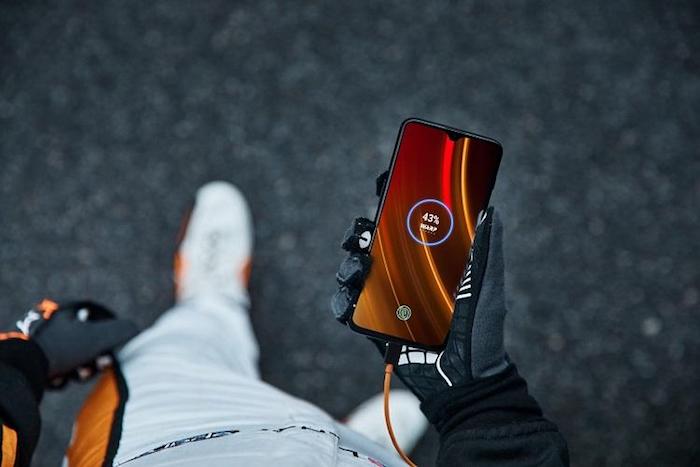 OnePlus debuted its proprietary fast charging solution with the OnePlus 3 and it was called Dash Charge, back then. It wouldn’t be wrong to say that Dash Charge set a benchmark for fast charging at that time due to the insanely fast speeds that it offered. You could get to about 60% in just half an hour which at that time was incredible. The reason OnePlus was able to achieve such speeds was due to the proprietary technology that they worked on.

Dash Charge was essentially Oppo’s VOOC technology which had a power rating of 20W. While it may seem like it’s just 2W more than QC 3.0, the major difference was in the way the power was transferred. While Qualcomm’s implementation involved varying both current and voltage throughout the charging cycle, Dash Charge kept the voltage constant at 5V and the increased the current intake to 4A. Using this and some proprietary circuitry in the charging adaptor as well as the phone, OnePlus managed to constantly pull 20A while keeping the temperature under check.

The Dash Charger was designed in a way to keep the excess heat generated within the charging brick itself, and the best part was that the charging speed was not affected even while using the phone. Cut to 2018, OnePlus introduced the OnePlus 6T McLaren Edition which bumped the power rating up to 30W. This was the transition from Dash to Warp Charge. The core principle remained the same here too. Maintaining a constant voltage of 5V while achieving a high current intake of 6A.

Warp Charge 30T, as it is referred to now on the OnePlus 7T and 7T Pro is indeed one of the fastest charging solutions out there. However, the one caveat with a proprietary charging solution like this is that you can only use the dedicated cable and power brick that has support for Warp Charge, or else your phone will not fast charge. Given that Warp Charge is exclusive to OnePlus, at the time of writing, there are no power banks that support Warp Charge so your phone will charge slowly at 10W when connected to one. There is, however, a rumored OnePlus power bank in the works, but again, you will have to specifically purchase that one only and it is surely going to be pricey. 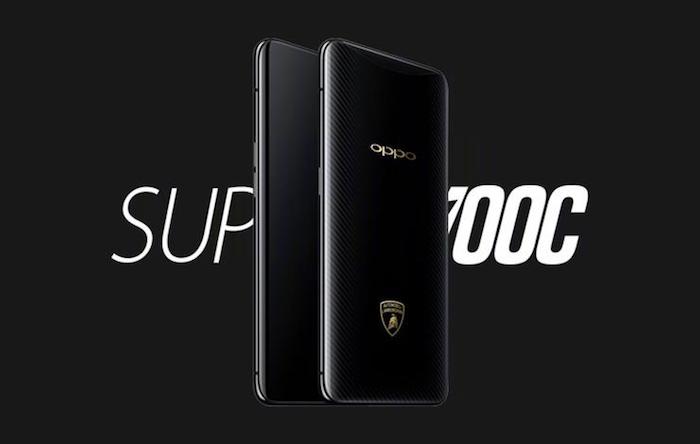 As we mentioned earlier, OnePlus’ Dash Charge was essentially Oppo’s VOOC technology and so it works in the exact same manner as mentioned above. It initially began from 20W as we saw with a few Realme phones and then it was bumped up to 30W, again, just like OnePlus’ Warp Charge. A lot of the latest Oppo and Realme phones like the Realme 6 and 6 Pro have 30W charging which is essentially Oppo’s VOOC technology.

What interested us the most though, especially when it was first introduced, was Super VOOC. Super VOOC first made its debut with the Oppo R17 Pro and the charging speed at that time blew our minds. It was a 50W adaptor charging approximately a 3500mAh battery. However, more than just the power wattage, what’s special about Super VOOC is the way it is implemented. Unlike regular smartphones where there’s a single battery unit, Oppo split the battery into two equal halves of the same capacity and through the 50W adaptor, charged both the batteries simultaneously to achieve a full charge in an incredible time of just 30 minutes. 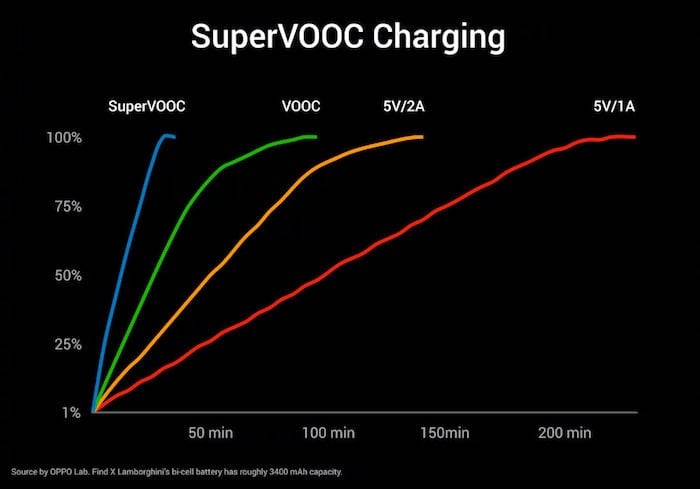 The same technology was then used in the Realme X2 Pro from last year which had a 4000mAh battery. The phone could charge completely in just over 30 minutes which is a life-saver if you’re in a hurry. Super VOOC was then developed more which resulted in a 65W power output and the same can be found on the Oppo Reno Ace as well as the Realme X50 Pro 5G. Super VOOC is undoubtedly one of the best and the fastest charging solutions out there. Charging a phone with a 4000mAh battery in under half an hour is no joke and Oppo has done a great job on the innovation front here.

However, Super VOOC again is a proprietary solution that works only with the cable and adaptor provided within the box so if you forget to take it along with you and you’re going to use a different charger or a power bank, your phone will still charge at just 10W. That’s the one trade-off you make to get extremely fast charging.

USB-PD is the most standardized fast charging solution and the best part about it is that it’s not limited to just smartphones and can be implanted on any device that has a USB-C port. Since PD is a standard built into the pins of the Type-C Port itself, there’s no dedicated hardware required in the form a chip/IC to support USB-PD. It’s up to the manufacturer, however, to enable USB-PD on their devices and both the device as well as the power brick must have them enabled.

The ultimate aim of USB-PD is to let a user carry just one single charger for all their devices, be it laptops, hard drives, smartphones, basically any device using a Type-C port. Now, because laptops and other high-power devices also use USB-PD, the maximum output is rated at 100W. A MacBook Pro, for example, can charge at upwards of 85W through its USB-C port, thanks to USB-PD. This is because both the MacBook Pro as well as the charging adaptor are rated at 85W. Smartphones with support for PD, on the other hand, are generally rated at 18W (Google Pixel smartphones for example) or the Galaxy Note10+ is rated at 45W (1 hour for a full charge of the 4500mAh battery).

Since all these devices make use of USB-PD, the single MacBook Pro adaptor can be used to fast charge all these devices. As the standard is not proprietary, one can use and PD compatible charger to fast charge devices and you don’t have to rely on just the charger that came within the box. There are also USB-PD compatible power banks like the one from Realme. The latest iPhones also support fast charging through USB-PD and that’s the reason they have a USB-C port on one end.

Apart from these popular fast charging technologies, Huawei has its own Super-Charge tech which is rated at 40W and uses something similar to Warp Charger by supplying high voltage (10V) at 4A. Xiaomi has its own 33W fast charger that comes in the box with the Redmi Note 9 Pro Max which uses Qualcomm Quick Charge and USB-PD. Fast Wireless Charging is also becoming more and more popular recently with the OnePlus 8 Pro expected to come with it.

Which is the Best Fast Charging Solution?

While Oppo’s Super VOOC is undoubtedly the best considering the speed, according to us, USB-PD is the way to go forward as it is a standardized solution and does not require any sort of proprietary hardware or adaptors. Since brands spend a lot of money and time on R&D related to fast charging and then results are indeed great, it would be really nice to see manufacturers incorporating both, their proprietary fast charging solution as well as support for USB-PD so if you are not carrying your original adaptor, you can still fast charge your phone using one that’s more widely available.