Casio’s G-Shock lineup of watches is one of the most popular digital watches out there especially if you’re going for a rugged look. In fact, the G-Shock branding has become synonymous with rugged-looking, chunky and sporty watches. However, G-Shocks are conventional watches that can only show you the time and while Casio did try its hand and smartwatches, it didn’t really go too well for them.

That’s where Amazfit has stepped in and bridged the gap. The Amazfit T-Rex is for all those G-Shock enthusiasts out there who also want additional functionality like the ability to track fitness, view notifications, change watch faces, control music, etc. that too at a similar price point and a similar level of ruggedness. Should you pick one up for Rs, 9,999? Well, read on to find out! 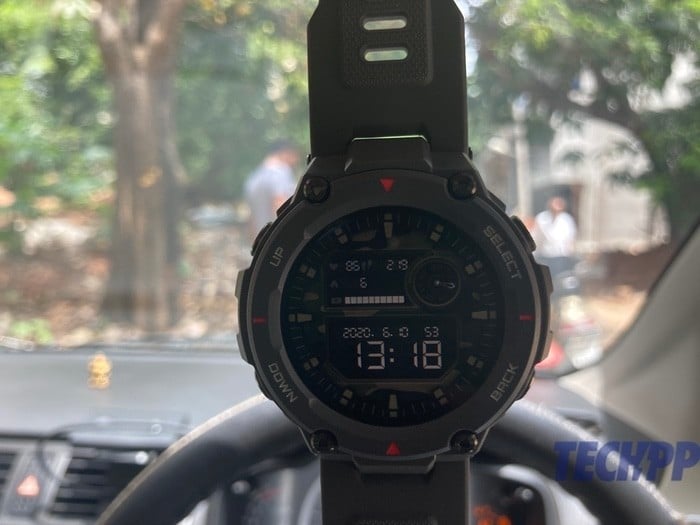 G-Shock feels right from the get go!

The first thing you would notice as soon as you unbox the Amazfit T-Rex is how closely it resembles the aesthetics of a G-Shock. While some may criticize the design for being too inspired by Casio, it’s refreshing to see this design language since most smartwatches are either plain circular or rectangular. The T-Rex brings in some bold elements to the mix and that’s something we really like. However, given its rugged nature and STD-MIL-810G certification (which basically means military-grade protection), the T-Rex is chunky and makes its presence felt on your wrist.

Surprisingly, though, Amazfit has managed to cut down the weight of the T-Rex considerably and you would be presently surprised at how lightweight the T-Rex is despite looking like it weighs half a kilogram. The construction is robust and while we haven’t tested it personally, it looks like the Amazfit T-Rex can take some beating and come out unharmed. The display is surrounded by a circular lip that prevents it from directly coming in contact with a surface which is a nice touch. The watch is 50m water-resistant so you can wear it while swimming.

There are four metallic buttons which again, are very similar to those on a G-Shock and give it a sporty look. While the module itself is extremely well-built, the straps were a tad too flimsy for our liking. It’s comfortable, but the material can cause slight irritation during summers when your arms tend to sweat a lot and the strap sticks to your skin can cause friction. The Amazfit T-Rex is an antonym for subtlety but that’s exactly what you’re looking for if you’re eyeing the T-Rex.

AMOLED Display for the Win 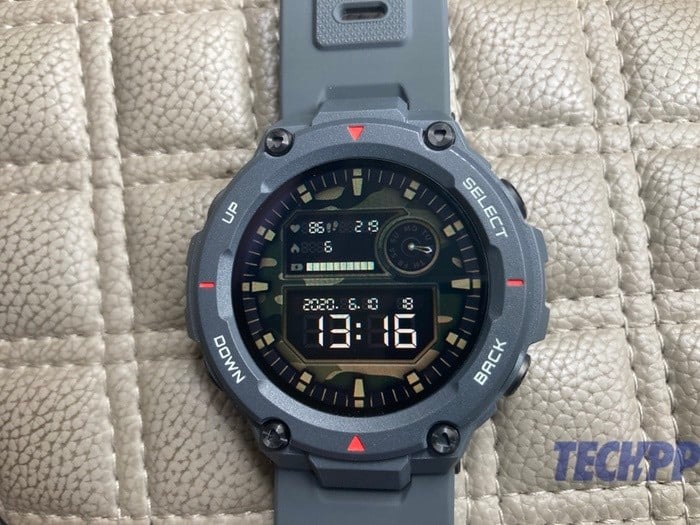 The Amazfit T-Rex gets a circular AMOLED display and this is where the major difference between a conventional G-Shock and a smartwatch starts to show. The AMOLED panel displays vibrant colors, is ample sharp for a watch, and the brightness is adequate to be viewed outdoors. There are multiple watch faces that resemble that of a G-Shock or any other sporty watch for that matter. 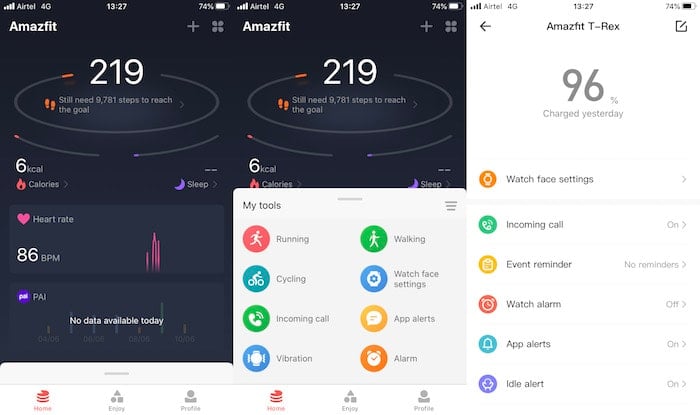 The Amazfit T-Rex can, of course, track your steps, distance walked, and calories burnt, along with multiple activity modes like outdoor running, walking, cycling, swimming, treadmill, exercise, climbing, skiing, and trekking. The Amazfit T-Rex can also track your sleep data but wearing such a chunky accessory on your wrist while sleeping isn’t the most comfortable thing to do. Speaking about the accuracy, the T-Rex managed to count steps very well and did not exhibit any ghost steps even while driving. Given that the T-Rex has in-built GPS too, you don’t need to carry your smartphone with you while going out for runs.

The Amazfit T-Rex comes with PAI which stands for Personal Activity Intelligence which helps you achieve workout goals over a span of a week which is easier to achieve rather than having daily goals. Heart-rate monitoring is also accurate but the one weird thing we observed was that when the watch was resting on a table and the automatic heart rate measurement kicked in, it displayed a heart rate value despite not being strapped on which is weird. It can cause discrepancies if you keep a track of your heart rate throughout the day so this is something that needs to be fixed via an OTA. 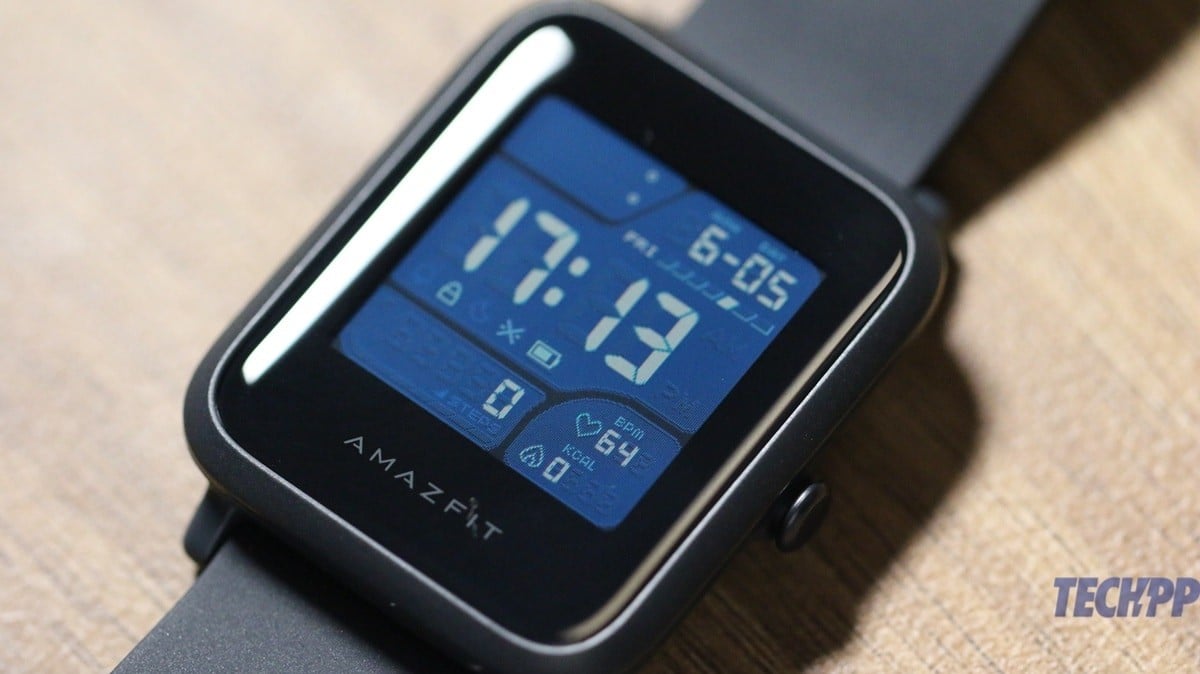 Amazfit Bip S Review: The Only Budget Smartwatch You Should Buy
Read More

The Amazfit T-Rex connects to either Android or iOS through the Amazfit app. The UI of the app is intuitive and displays all the required info in a categorized manner. You can also view the watch’s battery levels and change notification settings, watch faces, and almost everything related to the watch. Speaking about notifications, you can view them on the watch but cannot reply to them. Also, the watch does not display emojis in your messages and instead just shows boxes. It would be nice if the ability to send quick replies to messages are added in the future.

Apart from that, the T-Rex shows you the weather, lets you use the display as a flashlight by brightening it up, control the music on your smartphone, set alarms, reminders, timers, find your phone, and use it as a compass. There’s no support for third-party apps. The UI is smooth and we did not encounter any lags while navigating through the different menus. 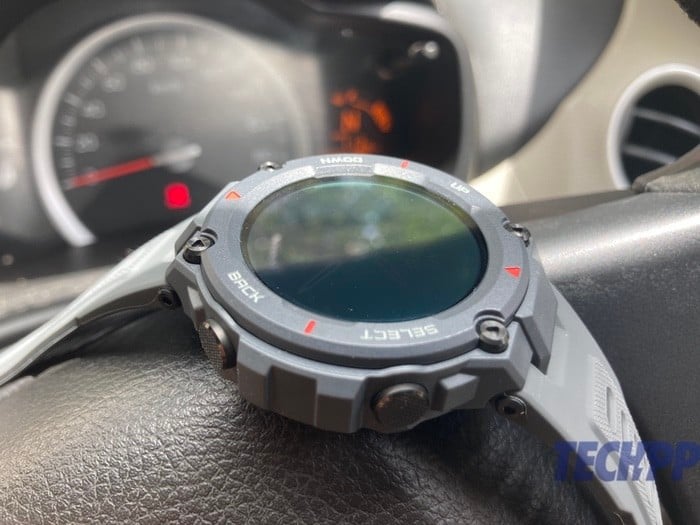 The Amazfit T-Rex promises up to 20 days of battery life on a single charge but we managed to get half of that with always-on display and heart rate detection every 30 minutes. With both these features turned off, you may get close to the claimed battery life. However, even a week-long battery life from a smartwatch that comes with an OLED display and a lot of features is commendable. The T-Rex charges using a proprietary charging cradle.

Amazfit T-Rex Review Verdict: Should you get it? 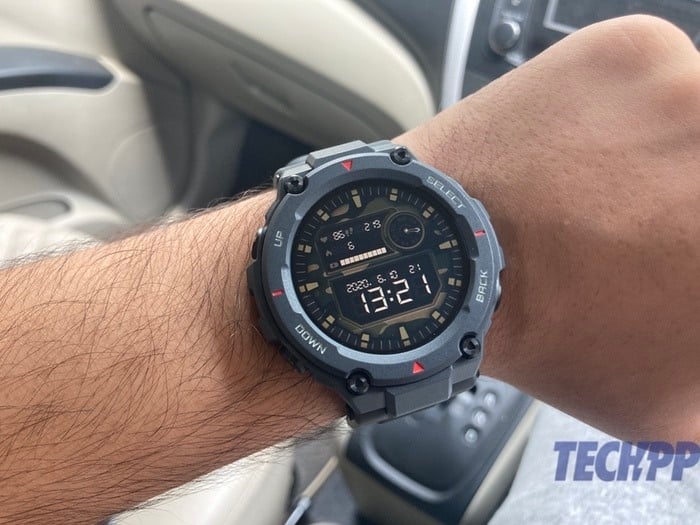 The Amazfit T-Rex is the perfect alternative to a conventional rugged watch like the G-Shock but with smart internals and a touchscreen display. While it’s still not a full-fledged smartwatch since there’s no support for third-party apps or notification replies, it still does more than what a traditional watch can while training the same looks and form factor, and even a similar price point of a G-Shock. The Amazfit T-Rex is a modern take on a watch from the Jurassic age.

Review Overview
Was this article helpful?
YesNo
TechPP is supported by our audience. We may earn affiliate commissions from buying links on this site.
Read Next
OnePlus Buds Pro 2 Review: Great buds for pro bros with OnePlus devices
#Amazfit #Amazfit T-Rex #review #Smartwatch