With brands releasing new smartwatches regularly, the budget smartwatch space in India is becoming super competitive lately. Amazfit, Realme, and Xiaomi have been ruling the segment with their value-for-money offerings for quite some time now. And now, they’re joined by OnePlus, who recently introduced its first affordable smartwatch, the OnePlus Nord Watch, in India.

At Rs 4,999, the Nord Watch makes a solid case for itself with its stylish design, vibrant and responsive display, good battery life, and a few smarts that add to its functionality. That said, the Nord Watch loses out on a few fronts, like the always-on display and built-in GPS that one of its strongest competitors—the Amazfit GTS 2 Mini New Version — priced a little higher at Rs 5,999 packs, which makes Amazfit’s offering equally compelling.

Let’s take a closer look at these smartwatches to find out how the two stack up against each other and which one deserves your money.

Clearly, Amazfit’s offering stands smaller and thinner than OnePlus’, and it shows when you have the two watches next to each other. In practical use, this means that the GTS Mini 2 wears smaller on the wrist than the Nord Watch, which makes it ideal for people with slender wrists.

On the build quality front, OnePlus’ choice of material for the Nord Watch is zinc alloy. Compared to the aluminum alloy built of the GTS 2 Mini, OnePlus’ use of zinc alloy offers the Nord Watch better durability and strength, which makes it ideal for everyday use.

However, this added strength comes at a cost: weight. So, while the GTS 2 Mini weighs 19.5 gm, the Nord Watch comes in at 35.6 gm, which works in favor of the GTS 2 Mini, as its lighter and smaller chassis makes you forget that it’s on your wrist.

Unfortunately, this smaller frame still doesn’t manage to translate to a comfortable wearing experience. For, the sensor grid at the back of the GTS 2 Mini sticks out a little too much from the body, which often causes it to leave an impression on the wrist when worn for long hours.

When it comes to dust and water tolerance, OnePlus’ Nord Watch comes with an IP68 rating, which can hold up to everyday use at the gym and occasional splashes, but you can’t go swimming with it. Meanwhile, the GTS 2 Min can handle up to 5ATM, which means you can use it to track your swim.

One of the benefits of a bigger chassis is that it can accommodate a large display. And OnePlus manages to do it nicely with the Nord Watch by adding a 1.78-inch display—bigger than most smartwatches in this segment—including Amazfit’s offering, which sits at 1.55-inch. Aside from the size difference, both smartwatches offer an AMOLED display. But sadly, you get the always-on display technology only on the GTS 2 Mini.

As for the screen resolution, it’s 368 x 448 px screen resolution on the Nord Watch, which is a little higher than the GTS 2 Mini’s 354 x 306 px. Similarly, the pixel density on the OnePlus’ offering also comes out on top at 326 PPI compared to Amazfit’s 301 PPI.

But having said that, the displays on both smartwatches are sharp and offer excellent clarity (wrt to their size) compared to their competition. Outdoor visibility is also excellent on both displays, so using them for outdoor workout/running sessions shouldn’t be a problem. We do, however, find the Nord’s display slightly better looking and smoother than the GTS 2 Mini’s.

Amazfit and OnePlus employ a gesture-based navigation system on both their smartwatches and it performs really well on both of them. However, we experienced that the smaller display size on the GTS 2 Mini sometimes makes navigating/selecting items on the screen a little inconvenient, as your fingers can cover up the screen’s content sometimes.

Amazfit and OnePlus use Bluetooth 5.0 LE and Bluetooth 5.2 for connectivity on the GTS 2 Mini and Nord Watch, respectively. Both pair with iOS and Android devices swiftly and offer a good range.

When it comes to health tracking capabilities, each one offers a bunch of features and can help you record steps, sleep, stress, and heart rate. With the GTS 2 Mini, you even get a built-in GPS, which allows you to track and map your outdoor runs conveniently without a smartphone.

In our experience, we found the step tracking slightly better on the Amazfit GTS 2 Mini compared to the Nord Watch. Although we highlighted in our GTS 2 Mini New Version review that its pedometer isn’t perfect in itself, we found that it isn’t as erratic as the one on the Nord Watch. Besides step tracking, the two watches do a good job of tracking heart rate, SpO2, and sleep.

Similarly, fitness tracking on both smartwatches is also good, and you get a bunch of activity-tracking modes on both of them. Free exercise, stretching, pull-up bar, sit-ups, etc., are among some of the activity modes we find are a nice addition that not many smartwatches in this price segment offer.

Lastly, talking about the battery life, the two perform well in this department, too. The Nord Watch packs a 230mAh battery, whereas the GTS 2 Mini uses a slightly smaller 220mAh battery. During our time with both of them, we got 11 days of battery life on the GTS 2 Mini (with AoD and built-in GPS engaged) and 13 days on the Nord Watch. It went down to 11 days on the Nord Watch with the animated watch face turned on and active heart rate, SpO2, and sleep tracking.

Amazfit uses the Amazfit UI on the GTS 2 Mini, which is the same UI you get on other Amazfit smartwatches and fitness trackers. OnePlus, though, is using Real-time OS (RTOS or FreeRTOS) on the Nord Watch, a popular smartwatch OS also seen on the likes of Samsung Galaxy Fit. It’s the same OS that also powers the OnePlus Watch.

Not using Wear OS is a choice many smartwatch manufacturers—especially in the lower-price segment—opt for because despite its several advantages, like third-party app support, Wear OS has its own share of bugs and issues. By creating custom skin, manufacturers can manage to offer a smooth and optimized performance on their devices and get the most out of their hardware on board.

Additionally, to ensure you miss out on much in terms of functionality on these two smartwatches, both brands offer a good collection of health and tracking features on their respective offerings. And there are even a bunch of built-in apps, such as a Camera, Stopwatch, Weather, Timer, Calculator, and more, to help you do more right from your wrist.

Both companies also offer companion apps for their smartwatches. With the OnePlus Nord Watch, you have the all-new N Health app, which is a slightly rundown version of OnePlus’ original Health app, meant specifically for the Nord lineup of smartwatches. Meanwhile, Amazfit uses its Zepp app. Both apps work fine and show you health and fitness data effectively, and you can use them to change watch faces and update the firmware as well.

The OnePlus Nord Watch is priced at Rs 4,999, and for that price, you get a solid build quality, excellent display, good battery life, and overall good performance. Meanwhile, the Amazfit GTS 2 Mini New Version comes at a slightly higher price tag of Rs 5,999. For an extra Rs 1,000, the GTS 2 Mini New Version gives you a built-in GPS, a slightly more accurate pedometer, built-in Alexa support, and generally well-rounded performance.

So, if you want a good-looking smartwatch with a nice and strong build, a vibrant display, and good battery life, the OnePlus Nord Watch makes for a solid recommendation. However, if you go out running/hiking a lot and a built-in GPS is a must-have on the smartwatch, or you need more accurate step tracking, the Amazfit GTS 2 Mini would better suit your needs.

As of writing this, Amazfit is running discounts across different products on its website. As part of this offer, it’s offering a Rs 1,000 discount on the GTS 2 Mini, which makes it an even more enticing option for those considering it over the Nord Watch.

Was this article helpful?
YesNo
TechPP is supported by our audience. We may earn affiliate commissions from buying links on this site.
Read Next
Snapdragon 782G vs Snapdragon 778G Plus: What Has Changed?
#Amazfit #amazfit gts 2 mini new version #comparison #oneplus #OnePlus Nord Watch 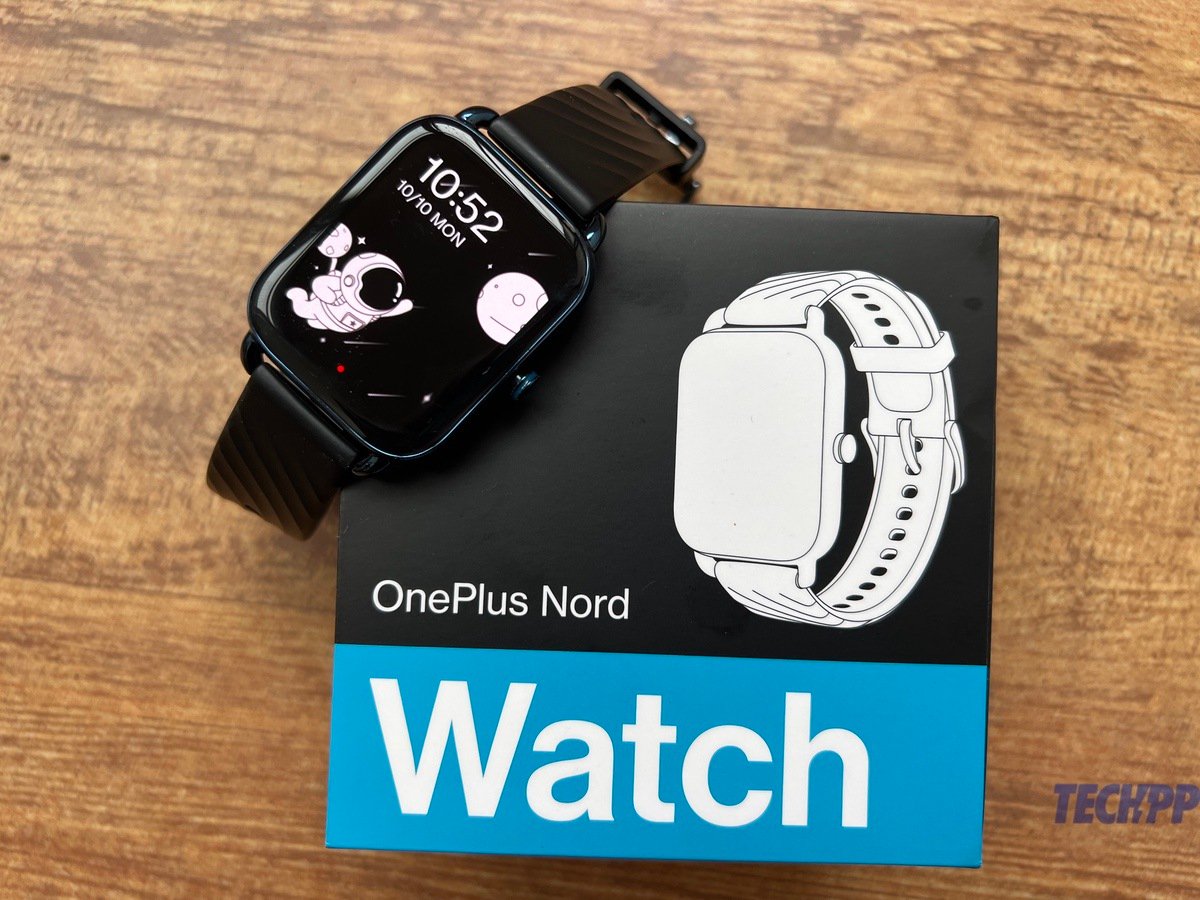