Quick Charge, a proprietary charging standard from Qualcomm that offers power over USB across all Qualcomm-powered Android devices, now has a new iteration. Called Quick Charge 5, the latest charging protocol from Qualcomm is the world’s first 100W+ charging solution, and it promises to charge the device from 0-50% in five minutes, while also being up to 70% efficient than its predecessor. What else does the QC 5 protocol have to offer, and when will it reach the end consumer? Let’s dive in to learn more.

Talking about the newly-announced protocol, Quick Charge 5, Qualcomm suggests that the protocol offers support for over 100W charging power and can charge a device from 0 to 50% in just five minutes, which makes it one of the fastest mobile charging solutions out there. Besides offering faster charging, the protocol also incorporates Qualcomm’s Battery Saver and Smart Identification of Adapter Capabilities technologies to offer better efficiency and extend the battery life cycle on a device. 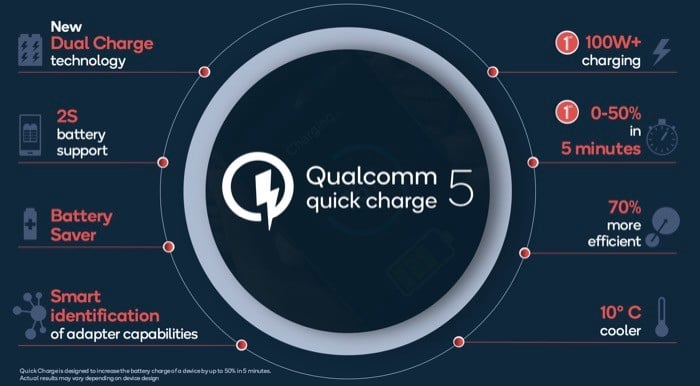 Giving details on the performance of the new charging protocol, Qualcomm says Quick Charge 5 offers four times faster charging than Quick Charge 4 and is 70% more efficient. Moreover, it also suggests that the new protocol runs 10°C cooler than its predecessor, and as already mentioned, it employs better protection to ensure the battery is protected across high voltages. To ensure the last bit, the protocol has 12 separate protections for voltage, current, and temperature, along with overvoltage protections at 25V and 30V and beyond.

Going into technicalities, Quick Charge 5 uses the latest Premium Tier Power Management ICs or PMIC, namely Qualcomm SMB1396 and Qualcomm SMB1398. As per Qualcomm, both these ICs support over 20V input voltage over wired and wireless power sources and provide a maximum power efficiency of above 98 percent. 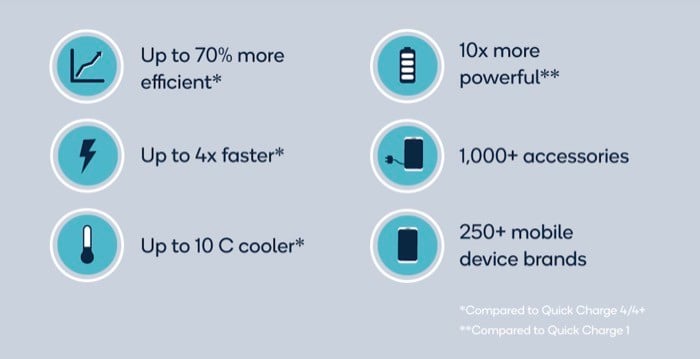 In terms of compatibility, Quick Charge 5 offers backward compatibility with Quick Charge 2.0, 3.0, 4, 4+, alongside existing Qualcomm SoC-powered devices in the market. The company suggests that its latest offering supports over 100W charging capabilities while maintaining the same footprint as the 45W charging solutions. And most importantly, it does not require users to purchase additional Quick Charge-certified accessories to be able to benefit from the new charging protocol. 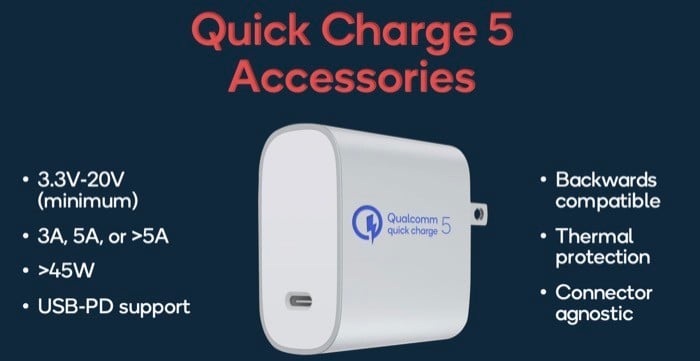 Furthermore, taking future scalability and adoption in mind, Qualcomm has optimized the Quick Charge 5 protocol to leverage the advantages offered by both, USB-PD and Type-C technologies, which would, in turn, help users benefit from the new charging solution and also help the companies in getting the faster-charging technology on more devices.

When it comes to availability, Qualcomm says it is currently sampling the Quick Charge 5 charging protocol with some customers, and the same is expected to appear in devices starting the third quarter this year. Quick Charge 5 will support the current top-of-the-line Snapdragon 865 and 865 Plus platforms, and will also make its way to the upcoming Qualcomm platforms.