Gaming laptops are gaining popularity (sorry for the tongue twister right at the beginning) due to the raw power that they offer in a portable form factor. Funnily, gaming laptops seem to be used more by content creators than gamers as the horsepower is perfect for 4K video editing and rendering. Hardcore gamers tend to prefer desktops as they offer more power and better thermals resulting in better performance. 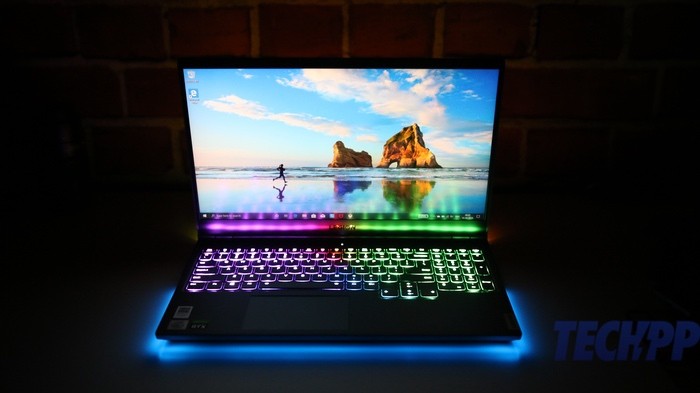 That’s not the point here though. Gaming laptops are the perfect balance between performance and form factor and that’s the reason a lot of brands make gaming laptops right from the mid-range segment of around Rs. 50,000 to the premium segment over a lakh. Two parameters that are common among all gaming laptops are power and RGB lighting. And the Legion 7i from Lenovo offers an overdose of both. We have been using the Lenovo Legion 7i for the past couple of days and here are our first impressions of the beastly machine.

Sober when asleep, Sassy when Awoken

Unlike most gaming laptops, the Legion 7i has a very sober exterior when in standby. A classy aluminum body that feels nice and cold when touched along with a hinge that can go up to 180 degrees. The Legion branding has an RGB logo that adds to the looks. With the lid closed, there’s very little about the Legion 7i that screams “gamer” and that’s something we liked since it maintains a low profile when you want it to, like at your office desk. In fact, in a vertical position, the Legion 7i looks like a blown-up notebook of sort especially due to the hinge design.

However, the moment the monster wakes up from sleep, you begin seeing the gamer aesthetics. Be it the TrueStrike gaming keyboard, the strips surrounding the body, or heck, even the ports and the air vent, all of them are fitted with RGB LEDs that give the laptop a typical gamer look. When kept on a white table with the lights turned off, the Legion 7i is such a looker. Having used the laptop for the past few days, we’ve started getting bored with the plain design of the MacBook. Maybe Apple should add some flair next time around! 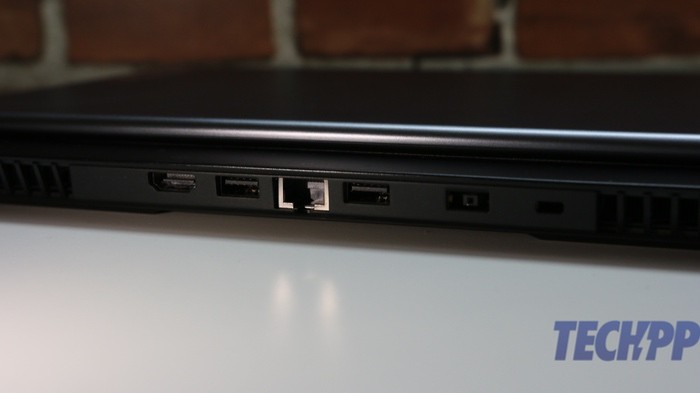 The Legion 7i gets almost everything right in the I/O department with three full-sized USB-A ports, two USB-C ports out of which one is Thunderbolt 3 compliant, a full-sized HDMI port, LAN port, and a headphone jack. The reason we said almost is the lack of an SD card reader which would have made it even better to recommend for photo or video editors. 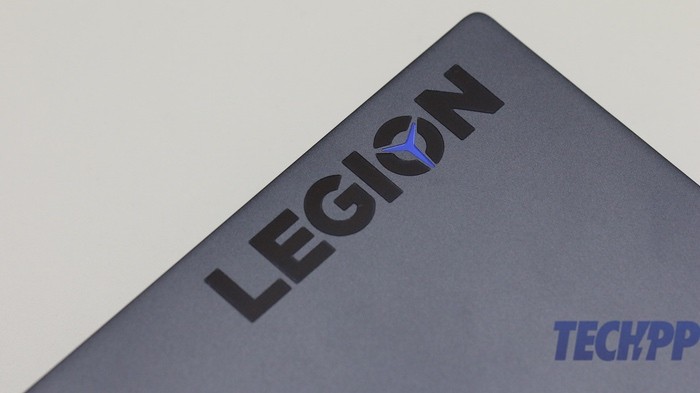 You get a full-fledged keyboard with a Numpad and the key travel seems good in our brief usage. The arrow keys are full-sized rather than the inverted-T config we see on most laptops and gamers are going to benefit from this. The RGB lights on the keyboard are surely going to excite the gamer in you. The lighting can be customized using the Lenovo Vantage app onboard. The trackpad also seems quite good but isn’t made of glass so it isn’t as smooth.

Not just the CPU, the Display is fast too! 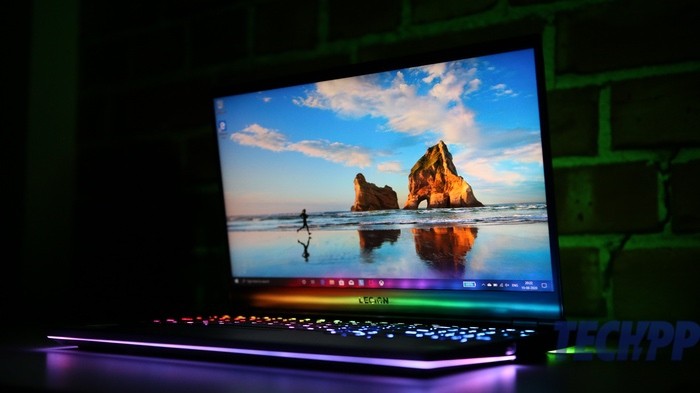 The Legion 7i comes with a 15.6-inch Full HD display with narrow bezels and covers 100% of the sRGB color gamut. The display also refreshes at 144Hz which makes it smooth and improves the gaming experience. It is a matte finish panel. Lenovo has managed to fit in a webcam despite the thin bezels and there’s even a mechanical slider that lets you cover the camera when not in use for added privacy. While that’s a nice touch, the camera itself still has a resolution of 720p. 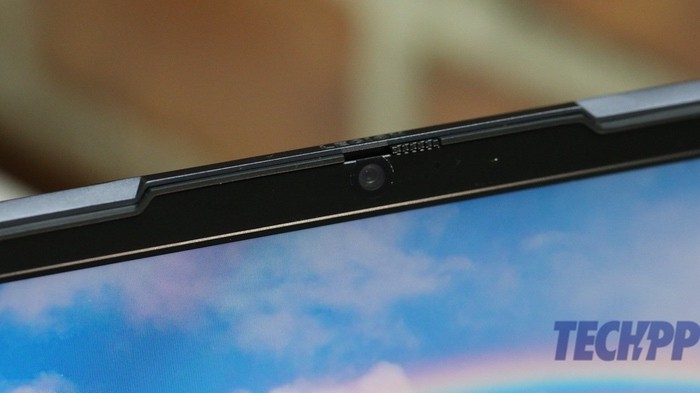 The Legion 7i maxes out with Intel’s 10th generation i9 chip while the variant we have with us has the i7-10875H with 8 cores and 16 threads. The RTX 2080 Super Max-Q from Nvidia handles graphics and there’s 16GB of memory on our unit with a 1TB NVMe SSD. While we haven’t been able to test out AAA titles yet to push the laptop to its limits, the specs on paper are solid. However, we will need to see how the thermals on the Legion 7i are handled as that is a major contributing factor to the performance of the machine. 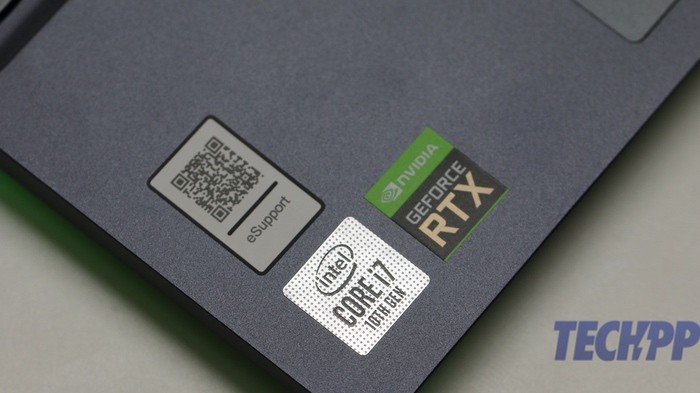 The Legion 7i has an 80Wh battery and when combined with the rest of the internals, still manages to weigh about 2.25Kgs which is not unruly. It does feel heavy though and cannot be carried around easily without making your shoulders or back feel sore. Coming back to the battery, just like most gaming laptops, we do not have high expectations from the Legion 7i. It’s best to leave gaming laptops plugged in at all times while using them since their batteries run out quickly and leaving it plugged in will ensure that you get the best performance.

The Legion 7i charges through a proprietary port using the 230W adaptor. Given the high wattage of the processor, the laptop cannot be powered via the Thunderbolt port. 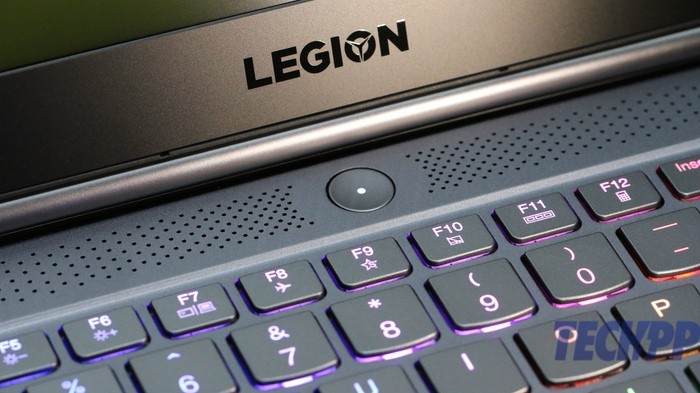 The Lenovo Legion 7i starts at Rs. 1,99,999 in India which is undoubtedly a high price to pay for a laptop. However, if you want the horsepower in a portable form factor along with classy looks, the Legion 7i can be a good option to consider. We will be putting the laptop through its paces in the coming days to form a verdict on the performance front so watch out for that.

Was this article helpful?
YesNo
TechPP is supported by our audience. We may earn affiliate commissions from buying links on this site.
Read Next
With Football Manager 2023 Touch, Apple Arcade finally has its “killer ...
#First Cut #First Impressions #gaming #Gaming laptops #hands on #lenovo #lenovo legion 7i