Active noise cancellation headphones do not come cheap. We actually did a story on affordable budget ANC headphones a few weeks ago, and the most affordable one in that list came with a price tag of close to Rs 6,000. So when a lesser-known brand called Tiitan contacted us with details of a pair of headphones that offered ANC at less than Rs 3,000, the question flashed across our minds: 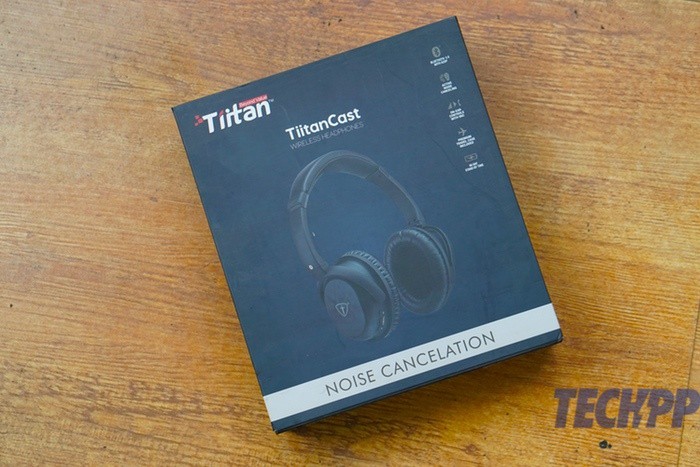 “Is this even possible?”

We were not the only ones who wondered. A number of people also asked the same question when we posted a video on our Instagram channel about these headphones – the Tiitan TW-N30 headphones. The reason for this disbelief was plain and simple – they seemed too good to be true.

They seemed to tick too many boxes – a 40 mm driver, active noise cancellation (ANC), support for virtual assistants, impressive battery life, a carrying case, the option to use them with a cable, and of course, they even promised very good sound. All this at a price that is generally in the vicinity of Rs 2500-3000 at Amazon and Flipkart. Yes, that is about half the price of the lowest-priced headphone in our list. And is actually the price at which you get slightly better than entry-level TWS, and decent Bluetooth earbuds (not cups!). It is the sort of price that sparks disbelief more than joy. After all, just how much can a pair of headphones deliver at that sort of price?

Well, the answer is: a fair bit. We are not joking. For the price that they charge, the Tiitan TW-N30 bring a lot to the table. And a lot of it is good. They are mainly a blend of grey and silver and on the surface, seem relatively routine in terms of design. Some might find the logos on the cups a little too large, but we were all right with it. There are relatively large buttons on the base of each cup for controls – volume up and down with a multi-function button between them on the left, and an ANC button on the right. The most notable design feature of these headphones are tiny LCDs at the base, one which blinks blue when you are connected over Bluetooth and another which lights up red when you switch on ANC. We could not find a way to turn them off. Some people might like them, but we found them a little on the loud side. 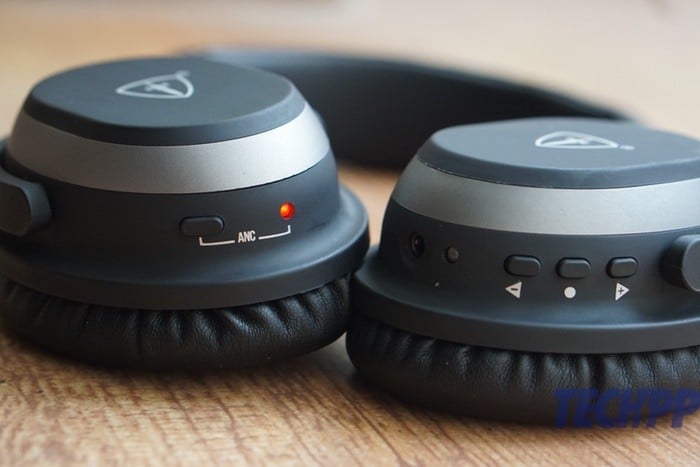 The cups themselves are made of plastic and so is the band between them, although there is a bit of metal that appears when you extend the band. The cushions inside the cups are of PU leather (pleather, as some call it). There is some padding on the band too – not much though. The cups fit comfortably over our ears, and the headphones were not too tight either. No, they are not in the JBL/Sony level of comfort, but they do not feel heavy and your head does not feel squeezed. The cups rotate ninety degrees inwards, which helps in storing them in the case. Speaking of which, yes, there is a proper stiff case in the box for these – very functional rather than funky, though. We cannot comment about how long they will last, but they seem solid enough to us. 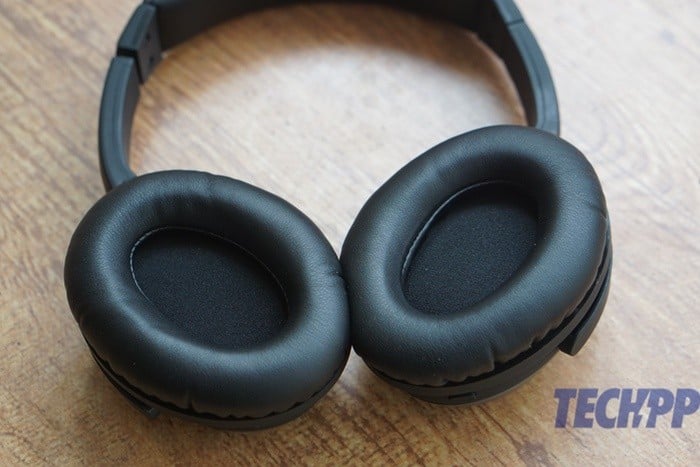 We will be honest: we did not expect the world from these headphones in audio terms. At that price, you assume that corners would have been cut. And when in the pairing process, the TW-N30 insisted on appearing as the HL-501, we had a feeling that something was amiss. However, the quality of the sound that came through the headphones pleasantly surprised us. No, it was not staggeringly good, but for its price, it was the kind of sound that most mainstream users would like – reasonably clear sound with a very strong bass accent. There were hints at times of the bass overwhelming other frequencies, so vocals and sharp stringed instruments got pushed to the background sometimes but we think that those who love that “beat-driven” music will feel right at home with these.

And yes, they sound better than all the TWS earphones we have heard at this price point and even a couple of thousand above. There is a little latency when it comes to gaming but they are good for most video viewing. They deliver reasonably high volumes although we could sometimes notice a slight distortion creeping in when we maxed the volume! Around 75-80 percent worked best for us. 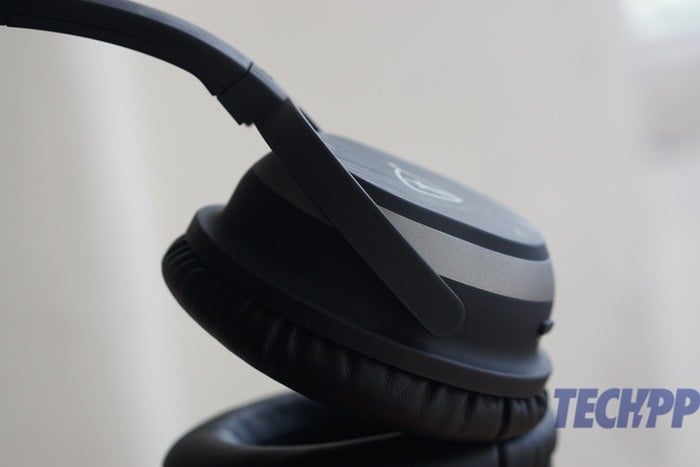 Then we come to ANC. ANC on these is activated by a button on the left earcup. And let’s put it this way: it exists, but is not the strongest point of these headphones. The ANC is on the lower side and while it will kind of reduce the hum of the ceiling fan and the murmurs of conversation around you, it is not going to block out really loud sound. The padding of the cups is also reasonably enough for some passive noise cancellation. Yes, some external sound gets drowned out, but in really noisy conditions, the TW-N30’s utility as an ANC headphone would be limited at best. And yes, there is a slight hiss when ANC is being used. A neat part about the ANC, though is that you can use it without powering on the headphones themselves. So if you are in an area which is a little noisy, you can put these headphones on and switch on ANC and things will be a little quieter!

Call quality, however, is a bit of a minus point. We could hear the person we were talking to very clearly but those we spoke to often said that we sounded as if we were seated a few feet away from the microphones. 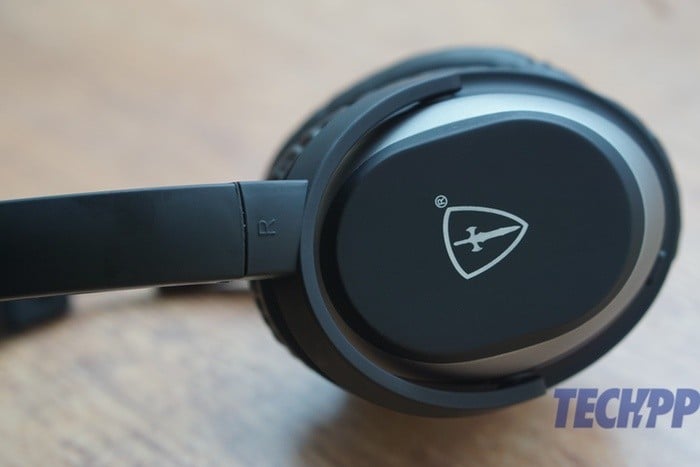 Which brings us to the biggest strength of these headphones: their battery life. While there is no official battery life given in hour terms, we found these clocking above fifty hours at around 75 percent volume again and again. These are literally “charge once and use without worrying for more than two weeks” kind of headsets. Impressive, and although you can use them with a cable when the battery does run out, we are not sure the need will arise too frequently. Mind you, they do charge over micro-USB.

But if the battery is the strength of the Tiitan TW-N30, its UI is a clear niggle. Connecting the headphones can sometimes be a bit of a problem and well, they show up under a different name as we pointed out. Also, summoning Siri or Google Assistant is supposed to be a long press of the multi-function button, but this did not always work. And while switching ANC on and off was easy, sometimes switching the headphones off (a long press) was a little erratic, especially as it sometimes invoked the digital assistant. We also found the connection dropping when a wall came between us and the source of the sound – we would not recommend these for those who work at a distance from their phones or notebooks!

Sounds like a good deal for those on a budget! 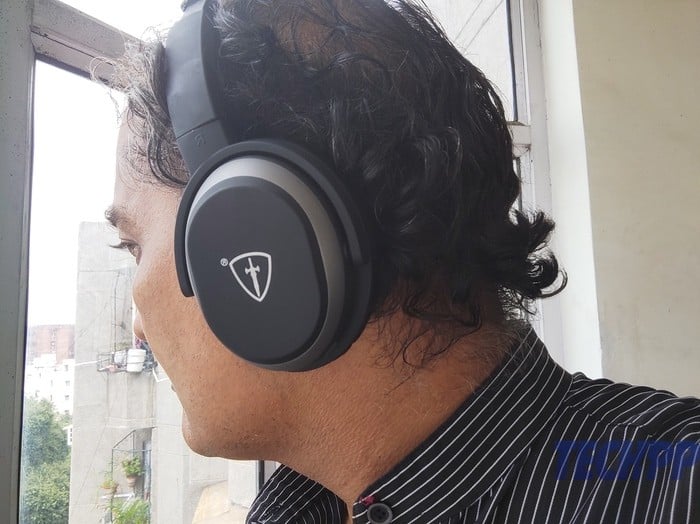 So should you buy the Tiitan TW-N30? If it is entry-level ANC that you seek along with decent sound in a very tight budget and crazy good battery life, these are in a zone of their own right now. In fact, if you are even just looking for wireless over the ear headphones with bass-heavy sound with great battery life, these again are a very good proposition. We would recommend them in terms of sound quality and battery overall Bluetooth earbuds and TWS at their price. No, they are not for the purists. But they deliver a lot of audio bang for not too many bucks. And even manage to drown out some external sound. They are not perfect, but at that price, they do not need to be.

The best wireless headphones below Rs 3,000? A contender, definitely, in terms of the overall package, though some brands will score in terms of design and sound.

Review Overview
Was this article helpful?
YesNo
TechPP is supported by our audience. We may earn affiliate commissions from buying links on this site.
Read Next
iQOO 11 5G Review: Does It End Your Quest for the Ultimate Smartphone?
#ANC #ANC Headphones #Headphones #review #Tiitan #Tiitan TW-N30