Just yesterday, Qualcomm announced a new entrant in its lineup of gaming-focused chipsets, the Snapdragon 732G, which is set to first appear on the upcoming Poco smartphone. A day later, today, its competitor, MediaTek, has now announced added a new gaming chipset in its G-series, the Helio G95. To give you a quick roundup, the G95 features enhanced MediaTek HyperEngine game technology, multi-camera support, improved (and stable) connectivity, and AI Super Resolution. Let’s take a closer look at the specifications to know more. 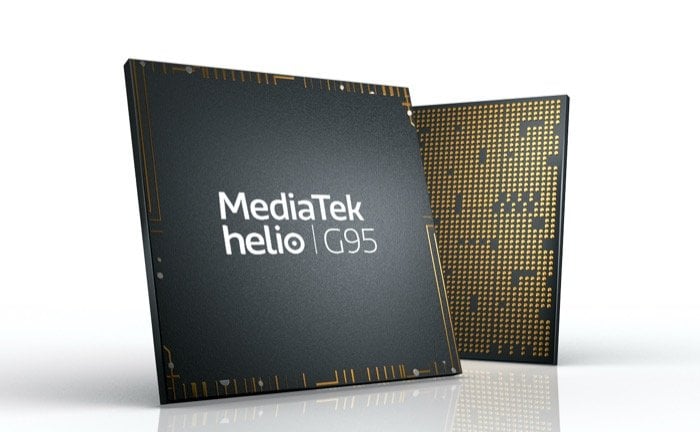 For those unaware, MediaTek’s G-series family includes the G90 series for the high-end smartphones, with the G85, G80, and G70 for mid-tier, and G25 and G35 for the budget smartphones. As already mentioned, the MediaTek Helio G95 joins the G90 and will power the upcoming top-of-the-line 4G smartphones. If rumors are to be believed, the G95 will be seen on the upcoming Realme 7 smartphone, which is set to debut along with the Realme 7 Pro. MediaTek claims its latest offering to be the ‘most powerful smartphone gaming-focused chip’.

To start with, the Helio G95 is an octa-core chipset, to no surprise, and it incorporates two Arm Cortex-A75 cores, clocked at a 2GHz. The CPU is accompanied by an ARM Mali-G76 GPU (clocked at 900MHz) for crunching those numbers and handling all the graphics processing. When compared to its predecessor (G90T), the new chipset offers a 5% boost in CPU performance and an 8% boost in the GPU performance.

Adding to the performance, with a focus on gaming, the G95 comes with MediaTek’s HyperEngine gaming technology, which promises to offer reliable connectivity, improved graphics, and better resource management, all of which promise to offer a smooth gaming experience. [MediaTek suggests that when Wi-Fi connection is weak, the technology triggers Wi-Fi and LTE concurrency to ensure a reduced/lag-free connection.]

In terms of the display, the MediaTek Helio G95 offers support for the AI Super Resolution display for video calling and streaming. It allows for streaming at 360p, with real-time upscaling to allow for HD resolution viewing. Similarly, the chipset enables FHD+ (90fps) displays for gaming and general, day-to-day use cases. Furthermore, there is also support for MiraVision Enhanced HDR10+ video playback.

For optics, the Helio G95 includes support for multi-camera setup (up to 64MP). It employs quad-pixel technology for low-light photography along with a depth engine for portrait bokeh, among other features. In addition, it also allows for the usual set of AI enhancement features.

Was this article helpful?
YesNo
TechPP is supported by our audience. We may earn affiliate commissions from buying links on this site.
Read Next
MediaTek announces Dimensity 720 5G chipset for mid-range smartphones
#helio g95 #mediatek