Can it replace your regular toothbrush?

It’s 2020, and it wouldn’t be wrong to say that technology has come a long way! For, with the advent of smart appliances/devices and the electric equivalents of manual appliances, the ease-of-use, convenience, and efficiency offered on these products is on an all-time high. From a consumer perspective, generally speaking, a lot of people fancy this convenience. And when equating it with the cost of the product, they don’t mind spending extra in exchange for what the products have to offer. 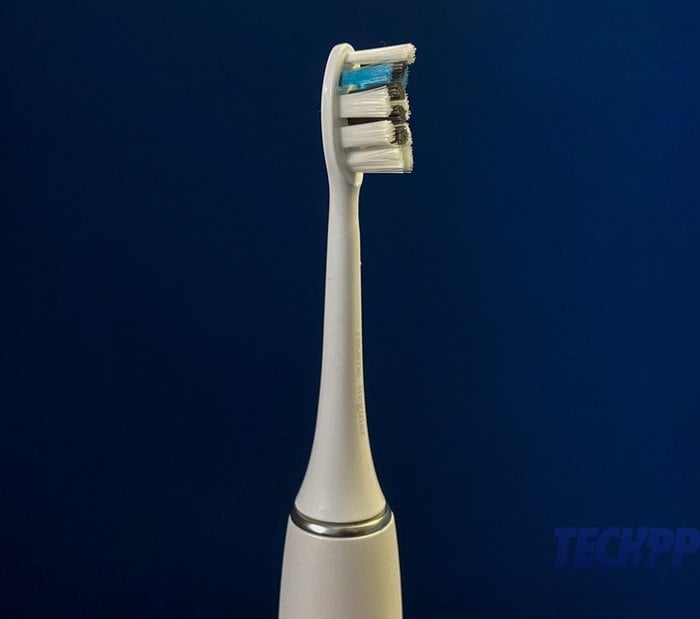 Before we begin, it is important to highlight that this is not the first time a company is bringing an electric toothbrush in the market. Over the years, we’ve had such products from some of the well-established consumer product brands — not to mention the one from another smartphone brand, Xiaomi, which falls along similar lines.
Moreover, at this point, you must also know that the Realme M1 Sonic is just an ‘electric’ toothbrush. In no way is it a ‘smart’ toothbrush — the one that offers data and insights into your brushing practices to help you take care of your teeth adequately. Instead, it just offers a convenient approach to brushing.

The Realme M1 Sonic comes in an elongated rectangular box. On the inside, there is an encasing to hold the toothbrush base, with two different brush heads (with different sensitivities) and a charging stand bundled inside two separate boxes. Moreover, there is also the usual literature to help your way around using the toothbrush.

In terms of design, the M1 Sonic toothbrush comes with a curved cylindrical body. The in-hand feel of the toothbrush is comfortable, and the company has done a good job of ensuring a confident grip on the handle by having a friction coating on its body. Out of the box, the toothbrush comes with a protective cap on the power shaft, which you need to replace with either of the two brush heads to start using. The body has a circular power button up front, with multiple LEDs below it to indicate the active brushing mode and the battery status. Since it is something that would be exposed to water regularly, the toothbrush comes with IPX7 water resistance. So, you can wash it thoroughly without having to worry about water ingression, which may otherwise hamper the longevity of the internals.

Moving to the brush head, as already mentioned, you get two choices with different sensitivities. One is a regular offering that is, in some ways, similar to regular toothbrushes, while the other has sensitive bristles for those with sensitive teeth and gums. Realme says the brush head is completely metal-free, which is a good material choice since you do not want a material that could potentially cause oral injury or feels too foreign to the mouth. Another important choice is related to the bristles used on the brush heads, which, in this case, are from DuPont. As per the company, these bristles come with rounded edges and have antibacterial properties. Moreover, of the two brush heads, the regular head includes a blue indicator, which fades over time to indicate the need for a replacement. However, as of now, there is no information on where customers can get the replacement brush heads. Add to that the fact that the toothbrush appears to be using some sort of proprietary mechanism, it seems very unlikely to find a replacement for the same from a third-party seller. 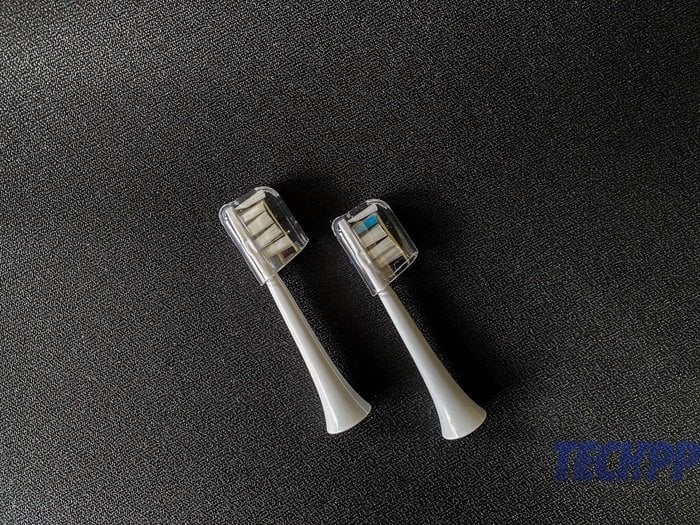 In our usage, the toothbrush felt easy to use, and the slim profile of the brush head made it easier to maneuver it around. You can get the M1 Sonic electric toothbrush in White or Blue colorway.

Realme says the sonic motor on its toothbrush can vibrate up to 34,000 times per minute to ensure effective cleaning. The motor is claimed to make less than 60dB of noise, which falls under the same bracket at which normal conversations usually take place. This noise can be a bit annoying, especially if you are using an electric toothbrush for the first time. And it takes a bit of getting used to before the noise does not alarm you anymore so you can brush your teeth freely. However, that said, if you are using it in the soft mode, which is the safest mode of the four, the noise is bearable and not that alarming and loud.

So, depending on your preference, you can primarily select any of the three cleaning modes, all of which differ in the intensity of vibration for cleaning. In case you are unsure, the Soft mode is a fairly safe bet here. Besides the three cleaning modes, the Polish mode, just as it sounds, offers varied vibration levels to polish the teeth and claims to restore that luster. You can toggle between different modes by pressing the power button on the handle in quick succession. Moreover, the toothbrush intelligently remembers the last brushing mode, so you always have the brush set to the mode you used it in your previous use. 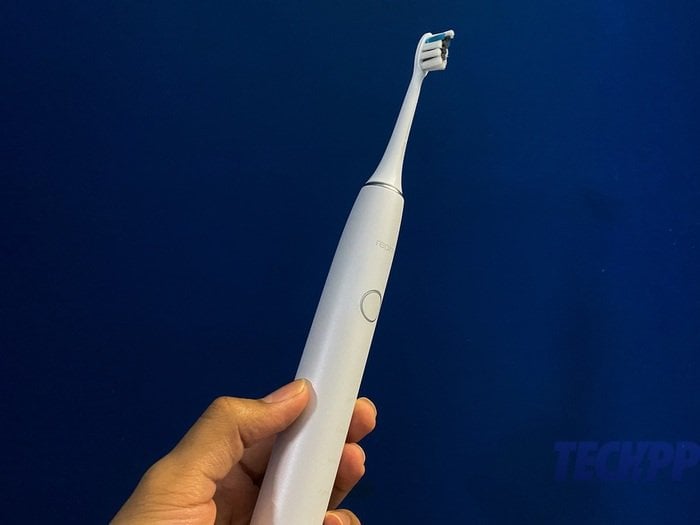 Talking about usability, the M1 Sonic has an automatic cutoff at the 2-minute mark, with 30-second haptics to remind you to switch and move to a different area. For those unaware, 2 minutes is the recommended brushing time that one should follow twice a day for better cleaning and healthier teeth. With the set limit, you can easily divide your time for both jaws equally on both sides and ensure you leave no corner untouched. In our testing, we were impressed with the cleaning offered by the toothbrush. And in no way did we face any discomfort using the toothbrush. In a nutshell, the overall experience of using an electric toothbrush, especially if you are coming from a manual one, is quite pleasant. You get way better cleaning as compared to a manual toothbrush, and the convenience offered pushes you to follow the 2-minute brush rule religiously, which is something that most people do not abide by with manual brushing. Although, we would say that if you are someone who is using an electric toothbrush for the first time, it might take you a day or two to get adjusted with the feel of an electric toothbrush and develop a technique of your own.

While we talk about the convenience and the relatively better cleaning offered on an electric toothbrush, some people might be skeptical about its safety and using it over a regular toothbrush in the first place. This is a pretty genuine concern, though, since a majority of people assume that an electric toothbrush causes more abrasion of the dentin than a regular toothbrush. And as a result, raises concerns over sensitivity and other oral problems.

To address these concerns, various researches have been conducted over the past few years to come to a conclusion. However, unfortunately, there has been no conclusive study that entirely favors either side. For, as already established, an electric toothbrush manages to offer better cleaning than a regular toothbrush, which, in a long run, helps in maintaining better oral hygiene. However, as some researches suggest, the vibrations and oscillating movements on an electric toothbrush can sometimes lead to more dentin abrasion than a regular toothbrush, which can lead to some dental problems.

So, at the end of the day, if you are someone who is planning to make a switch to an electric toothbrush, you can either get your hands on one and use it yourself (in moderation) to get an idea, or you can consult a dentist to assist you based on your teeth’s structure and sensitivity.

The Realme M1 comes with an 800mAh battery. And as per the company’s claim, it offers 90 days of battery life on a single charge, given that you are using it in the soft mode. While we cannot test the same entirely during our testing period (of over a week), which included brushing twice a day, the battery level indicator LED displayed a green light after all the usage. As per the company’s manual, the green indicator light suggests a battery level between anywhere 40-100%. 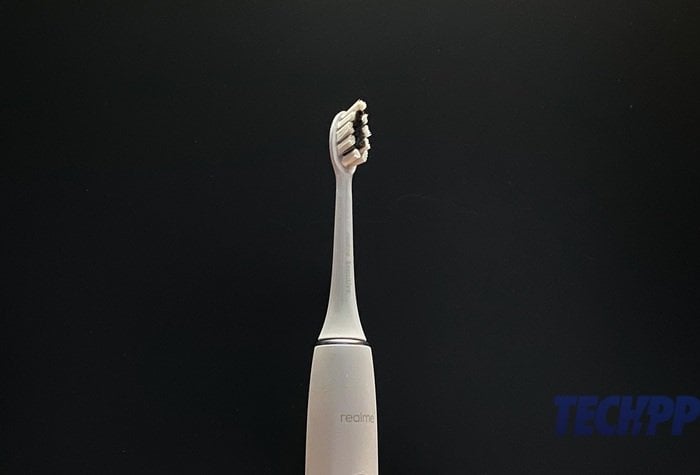 When it comes to charging, the toothbrush comes with a wireless charging stand, which requires you to stand the brush on the base to wirelessly charge the battery. By offering a wireless solution, the company takes away the need for a charging port on the toothbrush, as can be found on some other brands. This eliminates any kind of potential water ingressing that could otherwise occur had there been any port, since most of the time, their seals wear off over time. Talking about charging speeds, the company claims to charge the charging stand to completely charge the toothbrush in around 4.5 hours, with a 5-minute charge promising two days of usage.

Now that you have an idea about the Realme M1 Sonic, and hopefully, have your queries addressed, it finally comes down to whether you should buy one. Well, if you plan to switch to an electric toothbrush, the M1 Sonic is a good option under Rs 2000. It comes with one year warranty, and for a price of Rs 1999, offers an overall impressive cleaning with four different brushing modes and a good long-lasting rechargeable battery.

However, if you are looking for something on the lower or higher price point, there are various options from the likes of popular brands like Colgate, Oral B, and Philips.