When was the last time you kept staring at the SIDES of a phone? We mean, when you get a phone, you look at the front, and the back but the SIDES? Well, the iPhone 12 Pro Max makes history in that department for us. For, while gawking at new iPhones has become a bit of a habit with us, this is the first time we actually spent more time looking at the sides of the phone rather than its front or back. 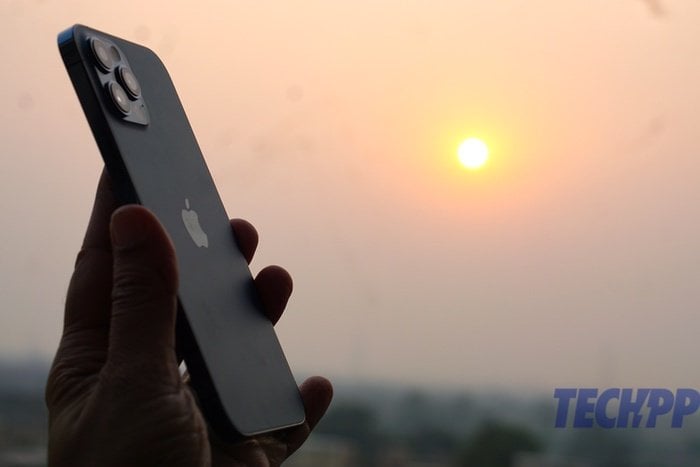 Give those sides more than a side-glance!

And that is because the sides of the iPhone 12 Pro Max are rather different from anything we have seen before on a phone. We got the Pacific Blue variant of the phone, and while the back’s beautifully subtle shade of blue, which almost looks like green from some angles, is going to catch some glances, the shiny straight blue sides are going to twist heads off their necks. Yes, they will get smudgy and stainy but take our word for it, they stand out and give the phone an entirely different dimension – even on the back of our unit, the black/dark blue borders of the sides almost added an incredibly slim border-like outline to the back. This is a very far cry from the very spartan sides of the iPhone 12. Rather interestingly, the volume buttons on the 12 Pro Max seem smaller than the ones on the iPhone 12, which is an odd thing when you consider that this is a much bigger phone.

The design format is broadly a blend of the iPhone 5 meeting an iPhone 11, with straight sides, a notched front, and cameras that look like flatlays of coffee cups (huge!), but all said and done this is a handsome phone if a big one. Even the speaker grilles at the base look nice.

Which brings us to perhaps the most discussed aspect of the iPhone 12 Pro Max – its size. It is the biggest iPhone we have seen so far, and while we do not think it is as massive as some are making it out to be. There are bigger Android phones out there, as we have discussed in another article, but there is no doubting that this is a big, wide phone and at 226 grams is definitely on the heavier side. It is also wider than most phones, so we would call it a bit of a palm stretcher, and those sides can make it a little slippery too. The entire phone is pretty tough – the display comes with Ceramic Shield protection (Apple claims it is the toughest glass on a display) and the phone has an IP68 rating (it can survive in up to 6 meters of water for thirty minutes). 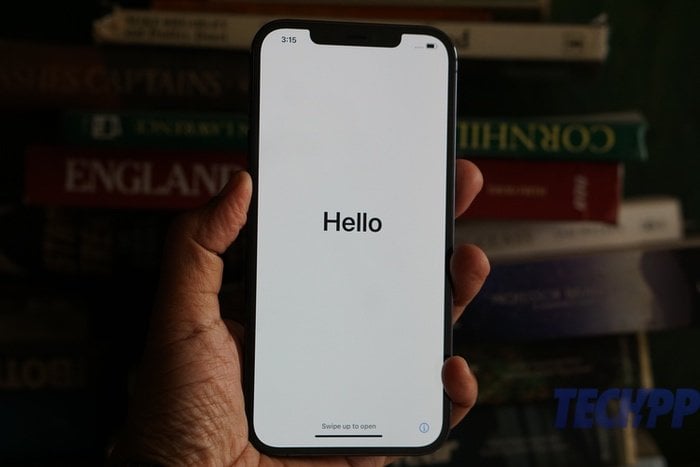 Is this the easiest phone to handle? Nope, it isn’t. It is almost a phone-y rationale for the Lord giving us two hands, but then we do live in an era when phones are getting as two-handed as a Rafa Nadal backhand. That said, it is as good looking as a Nadal backhand. It is every bit as power-packed as a Nadal backhand too. Which takes us to the spec side. 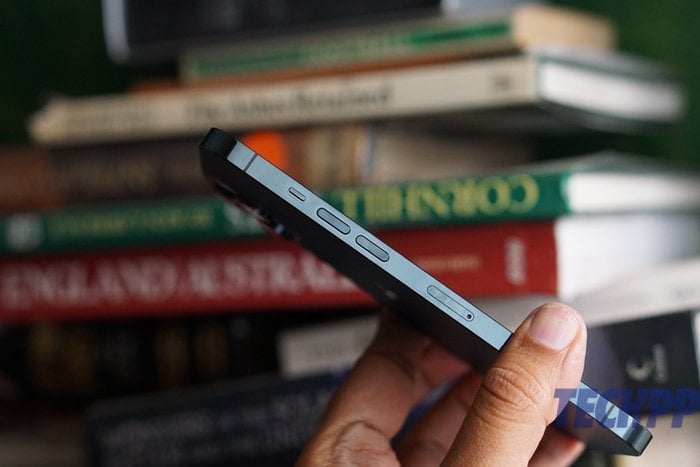 There is a lot in that frame, though. The display is a 6.7-inch full HD “super retina XDR OLED display” and while Apple has not got into the refresh rate races with Android and kept this one at 60 Hz, this seems a terrific display, and a little brighter than even the superb ones on the iPhone 11 Pro (it has the potential to get to 1200 nits of brightness, for the stat minded). Mind you, this is AMOLED, Apple Style, so do not expect eye-popping colors. It is AMOLED scaled down to look, well, more real. And we are not complaining. Yes, the notch is still there and is still there, but four years after its debut, we are kind of used to it, and it does not seem like an eyesore anymore.

Running the show inside is the job of the A14 Bionic, which is the latest Apple flagship chip, and is already being hailed as the fastest chip in the mobile world. And then there are the cameras, which are being called the best on an iPhone. Unlike the 12 and like the 12 Pro, the 12 Pro Max has three cameras at the back. Again, Apple has refrained from getting into the megapixel number race here – all three cameras are 12 megapixels. But there is a fair degree of ability there – there is one ultrawide, one main, and one telephoto sensor here (with a bigger zoom than on the iPhone 12 Pro). 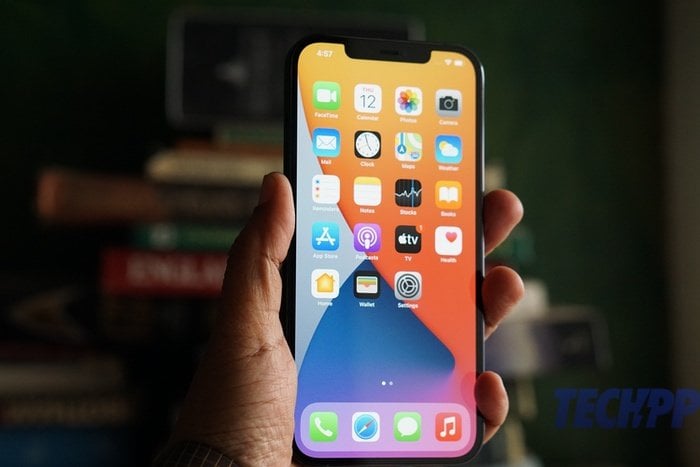 Apple says these are the biggest sensors on an iPhone, and these come with support for Dolby Vision. Also expected is the option to shoot and edit in Apple RAW Pro mode in the coming days – that A14 processor is expected to shine in this department. OIS is present and video recording is supposed to be next level, as usual, and the front 12-megapixel camera is supposed to be a dab hand not just at unlocking your phone (no touch ID here) but also in the selfie department.

Round that off with stereo speakers that sound really good, a battery that Apple claims can handle 20 hours of video playback (with support for wireless charging and Apple’s MagSafe magnetic wireless charger, although wired charging speed tops off at 20 W), 5G connectivity and iOS 14 that is optimized to run on this device, and the iPhone 12 Pro Max definitely justifies its tag of being the most powerful iPhone out there. 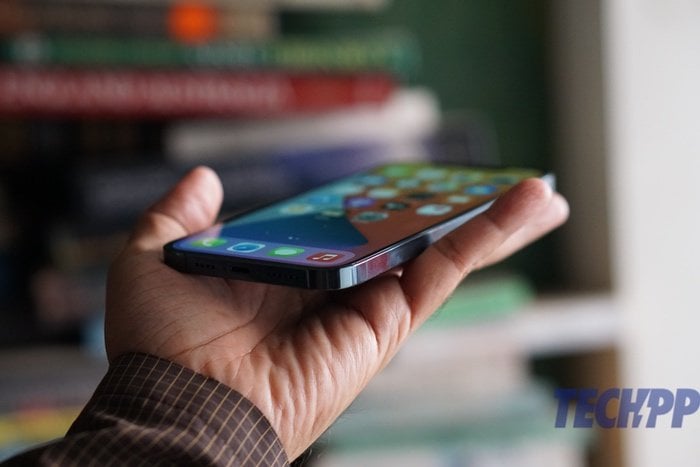 It is also the most expensive iPhone out there. At its starting price of Rs 1,29,900 for the 128 GB version, the iPhone 12 Pro Max does not come cheap. And that price seems even higher when you consider that the charger and the EarPods have been subtracted from the box. On the flip side, there’s no doubt that this is quite simply the biggest and best-specced iPhone out there – the biggest display, the best cameras, the biggest battery, and yeah, the biggest size as well (no, we do not think it is huge, and no, we do not think it is compact either). But do all of that justify the massive price tag?

Stay tuned for our review. Now, excuse us, we have got some sides to stare at!

Was this article helpful?
YesNo
TechPP is supported by our audience. We may earn affiliate commissions from buying links on this site.
Read Next
With Football Manager 2023 Touch, Apple Arcade finally has its “killer ...
#apple #First Cut #First Impressions #hands on #iphone 12 pro max