We reviewed the Lenovo Legion 7i earlier this year and it ended up being one of our favorite gaming laptops of the year. However, a factor that made it out of reach for a large chunk of consumers was its price. Starting at Rs. 2 lakhs, the Legion 7i was a powerhouse for sure but not everyone can spend that sort of money on a laptop. Along with performance, one aspect of the Legion 7i that stood out to us was its design. While there obviously needs to be some compromise in performance to lower the price tag, Lenovo has launched the Legion 5 with almost the exact same design as the Legion 7i but for a fraction of its price. 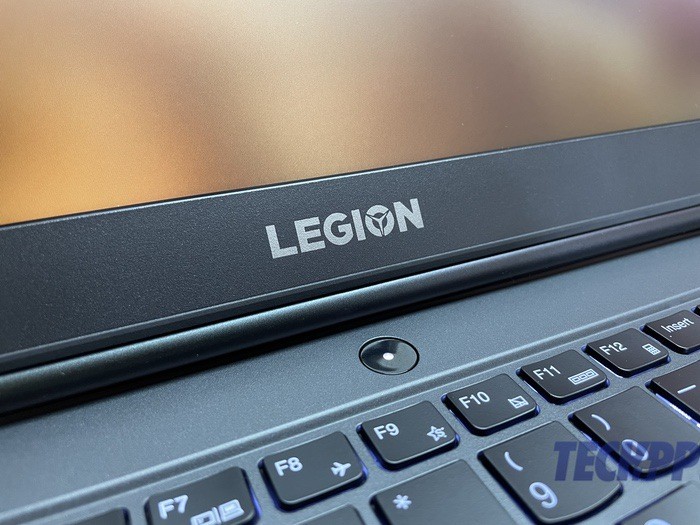 We have been using the Lenovo Legion 5 laptop for the past few days and while we still need to test out aspects like thermals and sustained performance extensively, we have a few thoughts about the laptop that might help you make a purchase decision if you are an early adopter and you want to get your hands on the machine as soon as it is made available to purchase. While we are on the topic of purchase, let us get it out of the way that the Legion 5 will start at a price of Rs. 74,999 in India for the base configuration.

As we mentioned earlier, one of the highlights of the Legion 7i that we reviewed earlier apart from its performance was its design and construction. The same design philosophy has been implemented on the Legion 5 as well which makes it an attractive machine. The Legion 5 has a solid build and feels sturdy when held in hand. The exterior has a matte finish and does show fingerprints quite easily. The Legion branding sits on the top right of the front panel accompanied by the Lenovo branding on the bottom left.

The hinge mechanism of the Legion 5 makes it appear like a book when closed which looks neat. While we mentioned that the Legion 5 is sturdy and built very well, one factor that put us off is the weight of the laptop. The Legion 5 weighs in at 2.5Kg which when carried along with a generously large power brick will surely result in some uneasiness for your shoulders and spine. Given the powerful internals, weight is a factor that is very hard to tackle with gaming laptops so if you want something thin and light, you will have to compromise on the performance. 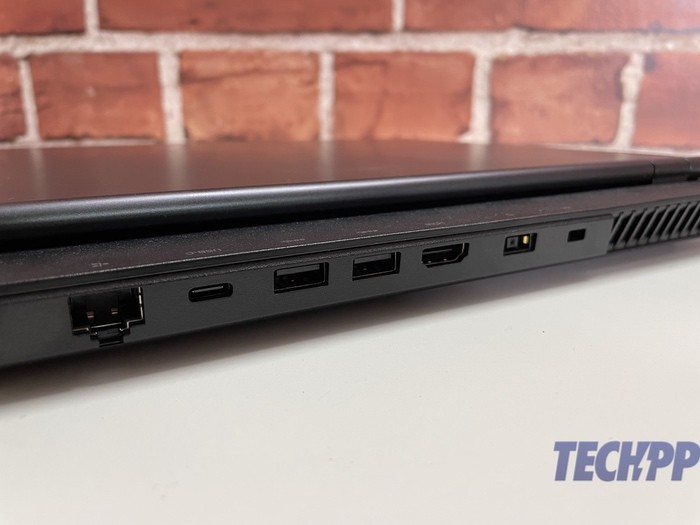 The Legion 5 is constructed out of polycarbonate and it seems like a logical choice given that metal would have added to the weight. Ports on the Legion 5i are abundant. You get 4 USB 3.0 Type-A ports, a USB-C port, an ethernet port, a full-size HDMI, a Kensington lock, a 3.5mm combo jack, and Lenovo’s proprietary charging port. The Legion 5 does not have a fingerprint scanner or facial recognition so you cannot use Windows Hello.

The Legion 5 has a full-size keyboard with a Numpad and the key travel seems good in our initial testing. The deck is comfortable to type on although there does seem to be a little flex when pressure is exerted. The keyboard is backlit with white light, unlike RGB lighting that is quite common on gaming laptops including Lenovo’s own Legion 7i. Lenovo says that they decided to go with white to give the Legion 5 a minimal aesthetic and to make sure it fits into any environment. The trackpad is slightly offset to the left and feels quite smooth and provides good feedback when clicked. 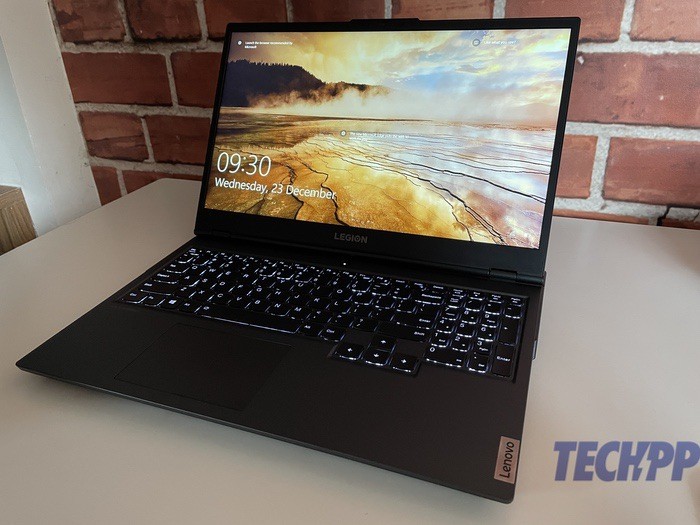 The Legion 5 has a 15.6-inch Full HD display with an anti-glare coating and a refresh rate of 120Hz making it suitable for gamers. It is an IPS display with configurations going up to 144Hz and 100% sRGB coverage, <3ms response time, and support for Dolby Vision. The display looks sharp and the colors on it look bright and vivid. The anti-glare coating makes it easier to use the laptop near a window and the viewing angles are also good. The bezels surrounding the display are quite slim on three sides which gives it an immersive experience.

We will have more to say about the display in our full review which will come out after a few weeks of use. The media consumption experience in our initial impressions is good though and the Harman Kardon tuned speakers add to the overall package. There is a 720p webcam above the display that even has a privacy cover that is built into a slider, just like we saw on the Legion 7i. 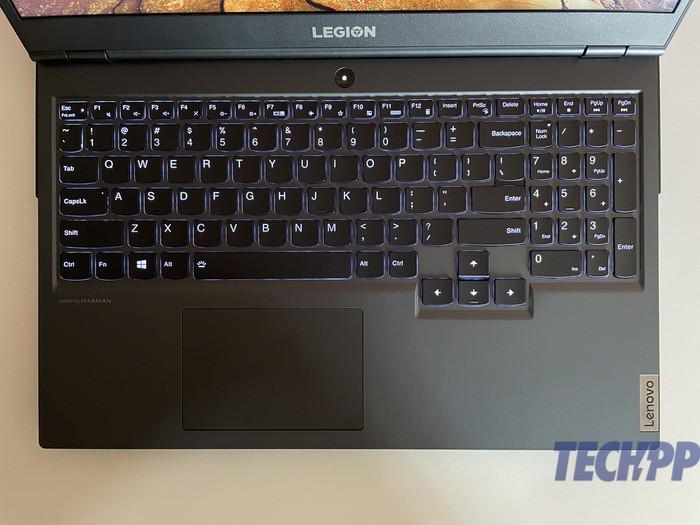 Our unit of the Legion 5 comes equipped with the AMD Ryzen 5 4600H CPU clocked at 3GHz and this can be upgraded to a Ryzen 7 4800H at the time of purchase. This is accompanied by the GTX 1650Ti from Nvidia which also can be upgraded to the RTX 2060 on the maxed-out configuration. There is 8GB of 3200MHz DDR4 RAM on the base variant with an option to upgrade to 16GB. If you choose to go for the base variant, the RAM is user-upgradable too at a later stage.

Our unit has a 256GB PCIe SSD as the boot drive along with a 1TB 7200RPM mechanical drive. Lenovo could have done away with the HDD in favor of a larger capacity SSD which would have both increased the performance and shaved a few grams off of the weight. Along with Windows 10, you also get pre-installed Microsoft Office Student and Home Edition free with the laptop. You also get Lenovo Vantage that can be used to configure the performance of the laptop. 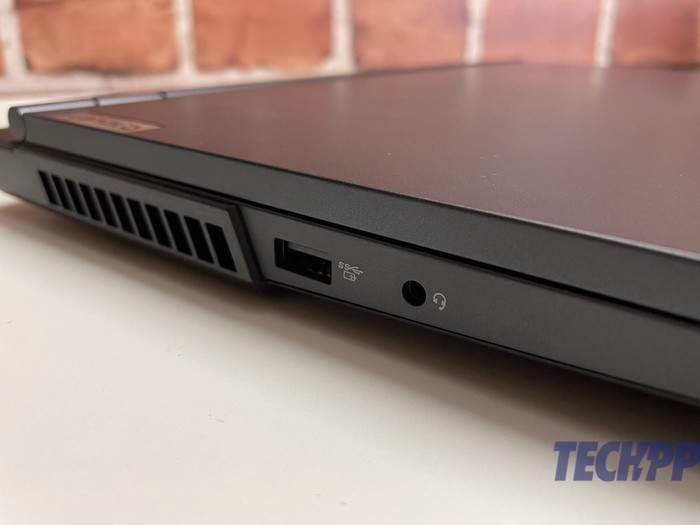 General performance seems fast and snappy just like you would expect from a laptop with these specs, but we need to spend more time with the machine to test the thermal performance and see if there are any signs of throttling with prolonged usage. We will test out some games and also try editing videos as such laptops tend to appeal to content creators as well apart from gamers due to their raw performance.

The Legion 5 has an 80Wh battery with a claimed battery life of 8 hours and while we have not been able to test the battery life extensively, the performance we have been getting from the Legion 5 is far from the claimed endurance. Just sitting in an idle state with the screen at 70% brightness, the Legion 5 lost about 20% in half an hour which is not very reassuring. Just like most gaming laptops, it is safe to say that being around wall outlets is your best bet with the Legion 5. 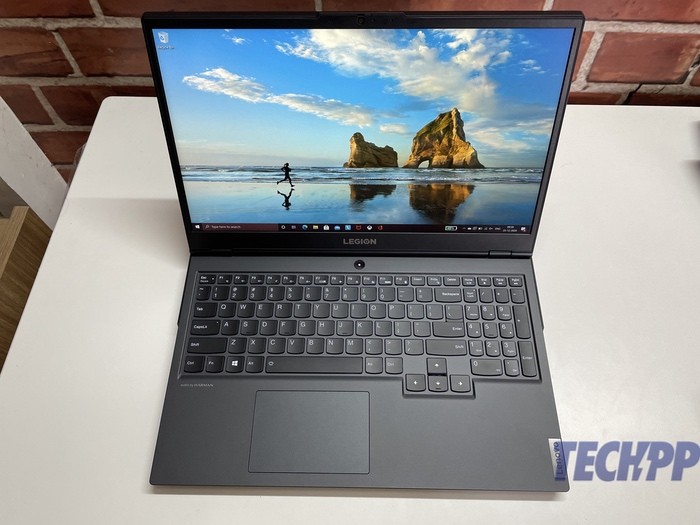 The Legion 5 from Lenovo seems like a solid option for anyone looking for an entry-level gaming laptop that does not break the bank. For a starting price of Rs. 74,990, the Legion 5 has a solid build with a sober design and has internals that looks promising on paper. If you are planning on getting yourself the Lenovo Legion 5, stay tuned for our full review wherein we will dive into all the nitty-gritty details of the laptop and answer the most obvious question – Is the Legion 5 the best laptop to buy under Rs. 75k?

Was this article helpful?
YesNo
TechPP is supported by our audience. We may earn affiliate commissions from buying links on this site.
Read Next
How to Get Your Epic Games Library on Steam Deck
#First Cut #gaming #Gaming laptop #lenovo #Lenovo Legion 5