We reviewed the Amazfit GTR back in 2019 with the verdict being not so much in favor of the smartwatch. We believed that the features that the Amazfit GTR offered were not enough to justify its price tag and hence, we recommended purchasing a fitness tracker for a fraction of the price that did a similar job as the smartwatch. When Amazfit sent us the newly launched GTR 2 and GTS 2 a few weeks back, we were excited to try them since they promised to offer some added features apart from the usual fitness tracking. 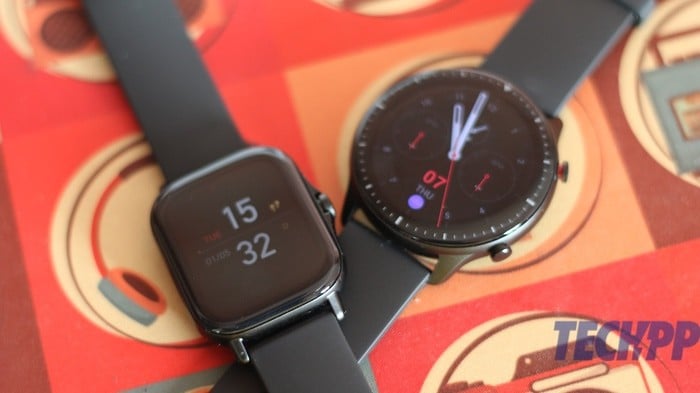 We have been using both the Amazfit GTS 2 and GTR 2 and decided to club both reviews since the only major difference between the two is the design and shape of the dial. Everything else including the functionality of both watches remains the same. Also, we will be focusing mainly on the new additions to these smartwatches since the core fitness functionality has remained the same for the longest time on Amazfit smartwatches.

This is the only department (apart from battery life, which we will address later) where the two smartwatches from Amazfit, GTS 2, and GTR 2 differ. The GTR 2 gets a circular dial much like the original GTR, while the GTS 2 also follows the footsteps of its first iteration and opts for a rectangular dial with rounded edges. Both watches have metallic frames attached to silicone straps.

The GTS 2 feels lighter when worn on the wrist while the GTR 2 occupies slightly more surface area and also appears to be slightly thicker. The GTS 2 has a single multi-function key on the right side emulating a crown, while the GTR 2 has two buttons on the right side with one being a shortcut key that launches workouts, and the second one used to turn the screen on/off and to navigate within the UI.

Both the GTS 2 and GTR 2 have onboard microphones and speakers which give you the ability to receive calls directly from the smartwatch itself, and the microphone also enables offline voice recognition which can be used to give verbal commands to the watch face. We will talk about this functionality in the latter part of the review. In the design department, we personally liked the GTS 2 better due to a sleeker, more minimal look, but if you prefer a sportier look and a round dial with a larger surface area to play with, the GTR 2 with its circular design should be your pick. Needless to say, both the GTR 2 and GTS 2 are water-resistant. 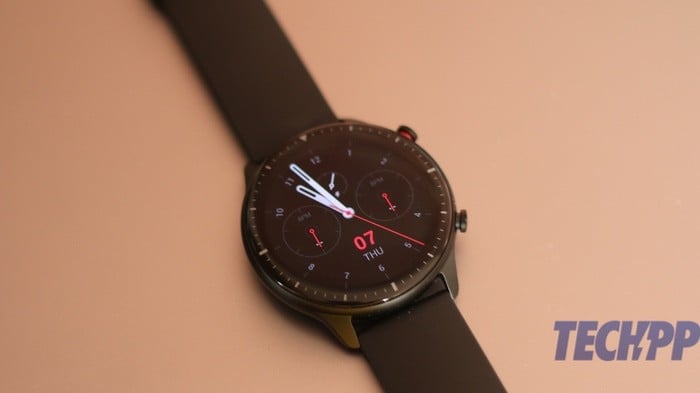 Given that the shape of the two smartwatches is different, the shape of the display also is obviously not the same on both smartwatches. However, the quality and characteristics of the panel used on both the GTS 2 and GTR 2 are similar. Both watches have an OLED display with excellent colors and viewing experience. The brightness is adequate to be viewed outdoors without straining your eyes, and watch faces look beautiful on this display. 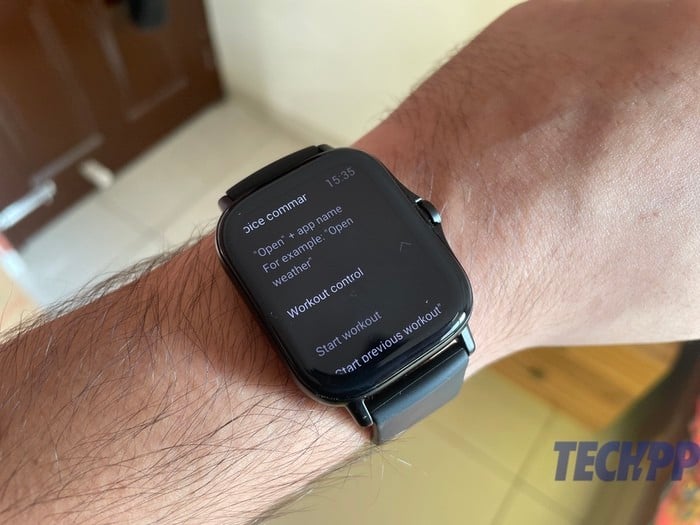 The display glass is curved on the edges which adds to the premium look and for their price range, it would be safe to say that the Amazfit GTR 2 and GTS 2 smartwatches have one of the best displays in this segment. There is no input lag when interacting with the display and the UI responds smoothly to touches and swiping gestures. Given that it is an OLED display, having a watch face with a black background both look great and will also help in conserving battery life. The OLED panel also enables both smartwatches to have an always-on display which in our opinion is a must on any watch, after all the primary use case of a timepiece is to tell the time.

Even with the display, choosing either watch will give you the same experience, albeit the panel on the GTR 2 gives you a little bit of extra room thanks to its circular design. The circular display on the GTR 2 also means that it looks more like a conventional watch which a lot of people care about given that the watch would also act as a fashion accessory to go along with their wardrobe. 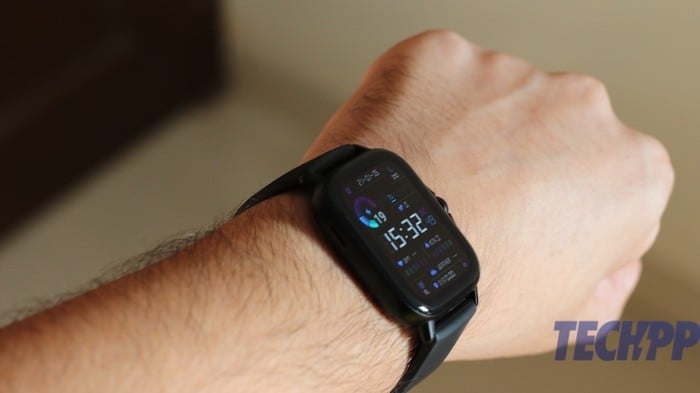 As we mentioned earlier, we are not going to focus a lot on the fitness aspect of the watch (which might seem ironic given that a smartwatch’s primary use case is for fitness and tracking workouts) but of course, we get all the usual features like step tracking, distance walked, calories burnt, heart-rate monitoring, sleep tracking, and several activity modes like cycling, running, swimming, etc. The accuracy of both smartwatches is right up there with other wearables in and above this segment and one of the positives on both the GTS 2 and GTR 2 is that neither of them counts a lot of ghost steps. Both watches have GPS in-built so you can go for a run without your smartphone.

A SpO2 sensor is also present and can be quite important for you in this situation where it is advisable to keep track of your Blood Oxygen levels at frequent intervals. While most of this functionality has been present on Amazfit’s watches for a while, what is new is the ability to take calls directly from the watch, storing music offline onto the internal storage of the watch, and the support for voice commands to perform certain functions on the watch. Let’s go over each of them. 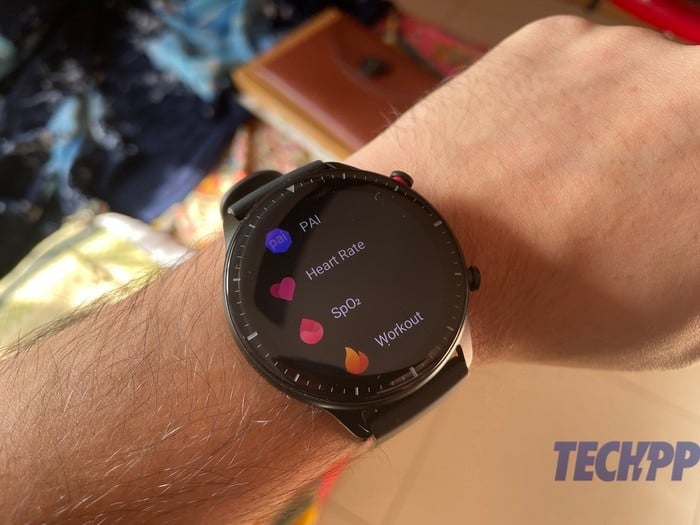 Both the Amazfit GTS 2 and GTR 2 have onboard mics and speakers which allow you to answer an incoming call on your smartphone directly from the watch itself. The speaker quality is surprisingly good, although not very loud, and the opposite party did not complain of any issues with our voice reaching them either. Now, of course, you would not want to use it all the time since sticking your wrist up to your ear isn’t the best-looking scene when you are out and about, but for a quick call when your hands are busy typing an article like this once, it can be a convenient option.

The mic on board isn’t just for calls though. It can be used to give voice commands to the watch when the screen is lit-up and the actions you can perform are quite interesting, to say the least. You can navigate to different menus, you can start or end workouts, you can launch timer, go back to the watch face, control music, etc. Speaking of controlling music, both the GTS 2 and GTR 2 have the ability to store music locally on the smartwatch so if you plan to go on a run without your smartphone, you can transfer your music to the watches from the Zepp app. The accuracy of voice recognition is surprisingly good and it worked 8/10 times. 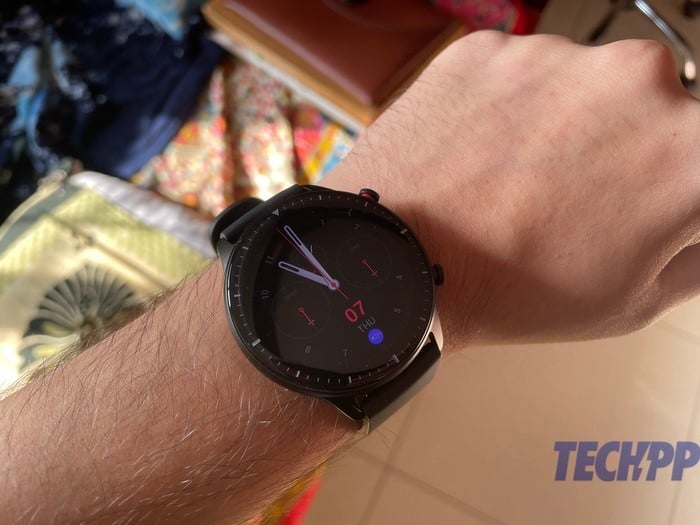 This is a cool and nifty feature since it allows you to keep your smartphone at home if listening to music was the only reason you had to take it with you every time you went to the gym. It is promising to see Amazfit listening to user feedback and adding more features like these to their new smartwatches. Amazfit also seems to be working on a voice assistant for the GTS 2 and GTR 2 and it may be rolled out via a software update sometime later. While these additional features add a lot more value to the GTR 2 and GTS 2 and contribute towards enhancing the smartwatch experience, we would love to see the ability to reply to notifications or install third-party apps onto the watch. These are the top two features on our wish list. 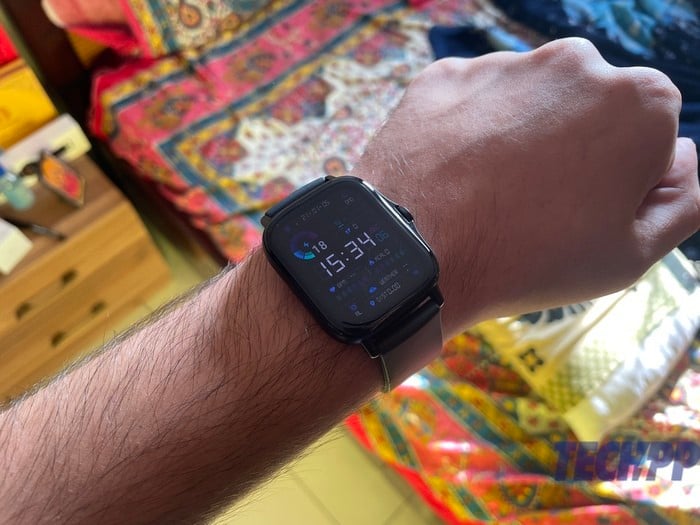 The Amazfit GTR 2 claims to have a bigger battery than the GTS 2, but both watches in our experience lasted about a week before needing the magnetic charger to snap onto. Note that this is with the always-on display enabled and the voice recognition feature turned on. Battery life will vary based on your usage patterns but it is safe to say that with every feature turned on, you can expect at least a week’s battery life from both watches. If you turn off the automatic heart rate monitoring feature every few minutes, you are going to save some more juice.

The Amazfit GTS 2 is sold in India for Rs. 12,999 while the GTR 2 is slightly more expensive at Rs. 13,499. When compared against smartwatches in this segment, the Amazfit GTR 2 and GTS 2 offer superior functionality in terms of the ability to take calls, music storage, voice control, and a gorgeous display. If you can, however, extend your budget slightly to Rs. 14,990, the 41mm variant of the Oppo Watch comes with WearOS which offers a ton of more functionality along with the ability to reply to notifications and install apps from the Play Store. The downside of the Oppo Watch though would be that you will have to charge it every single day. 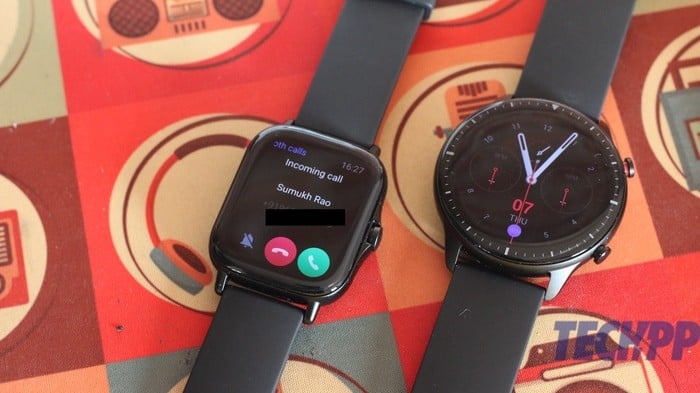 You need to pick your poison here. If you don’t mind charging your watch every day, the Oppo Watch is undauntedly a better pick. However, if you do not care as much about the added features and your priority is good battery life and stylish looks, the GTS 2 and GTR 2 from Amazfit will not disappoint you. You can also consider the Amazfit GTS 2 mini which we reviewed earlier if you are on a tighter budget. It offers the same fitness features but forgoes the ability to make calls and store music.

The Amazfit GTS 2 and GTR 2 smartwatches are a step in the right direction from the company as they are moving towards adding new features and providing more functionality on their smartwatches rather than just being glorified fitness trackers in the body of a smartwatch.