The Galaxy S21 series is like a benchmark for the competition to match in terms of ability.

There is a sequence in the 1953 Hollywood film, The Wild One, where a girl asks the hero (a leather jack clad Marlon Brando),

Hey Johnny, what are you rebelling against?

(Check the scene again here. Swooning over Brando is not optional). 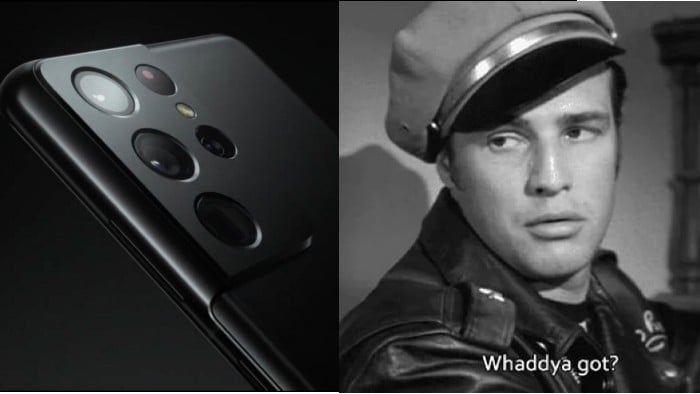 And well, that was what ran through my mind as Samsung unleashed its latest series of flagships on the world. We have discussed their specs often enough and there is no doubting their ability and quality. The big question that however needs to be asked is: what is their competition?

Started out with the iPhone and other premium flagships

About eight years ago, the answer would have been simple – the iPhone. The Galaxy S was perhaps the first Android device to consistently challenge Apple’s phone for the mantle of best in the world. It was also one of the few with enough sass to take it on again and again, in the market and in advertising. Not everyone liked the confrontation, but hey, most consumers loved the spikiness. Samsung for many was the Android David standing up to the iPhone Goliath.

As time passed, the S series also picked up new rivals. And by 2016, it was taking on not just the iPhone but what was a very strong Android premium smartphone segment – it went up against the best of Google, Sony, HTC, and of course, its G series rival, LG.

And now we are here

Recent years have, however, seen the Android premium segment getting smaller. LG seems to have moved on to being the master of odd flagships (the Wing, the Velvet), Sony and HTC have faded out, and Google seems to be taking a more mid-segment approach to the flagship game. Yes, some of the Chinese brands like Oppo and Huawei do come up with premium flagships but their markets are smaller. If anything, the last half a decade has seen the emergence of the budget flagship segment, spurred by the likes of OnePlus, Xiaomi, and more recently Realme.

The S21 series is certainly not sparring with the budget flagships – its most affordable variant is more expensive than the most expensive OnePlus. And while its range might bear a closer price alignment with the iPhone range – a regular, a slightly bigger, and a much bigger device – I am not too sure if the Cupertino giant is a target for the Korean brand. And this seems to be evident in terms of both marketing push and sales.

Getting to be a true flagship?

Indeed, the only Samsung device in the list of ten bestselling phones of the first half of 2020 was the Galaxy A51. Incidentally, Apple had five iPhones on that list. That is not a matter of victory or defeat, really. Samsung simply seems to have made the S series – and even the Note to an extent – a showcase of what the brand can do rather than how much it can sell. It seems to be more about itself than the competition – never mind the absence of the charger! 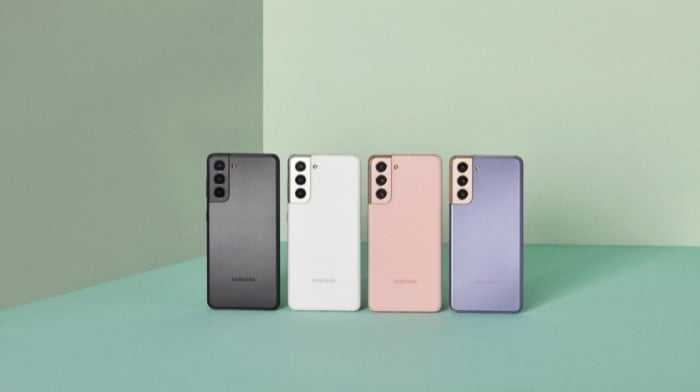 The S21 series is therefore actually a little like the classic flagship – the ship at the top of a fleet that was the best crafted and most secure because the general or the king was in it (and hence it carried a flag on the top – and also hence its being called “flagship”). Most of the fighting would be done by the smaller ships. The flagship’s role was simply to remind the enemy of the presence of its most powerful rival.

The M and the A series are likely to be doing most of the heavy lifting in terms of sales for Samsung. The S series seems more like a statement of ability. It is the, to use a former Samsung brandname, the alpha. I am sure the S21 will have more affordable variants as the year passes – a fan edition, a lite edition, a mini…who knows. But just as with the S20, the main devices will continue to scream “premium,” because of what they are. 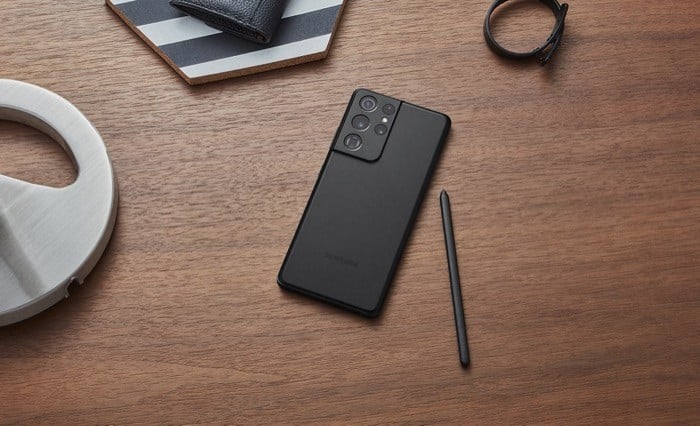 The original Galaxy S might have been the sleek and light paperback for everyone. The S21 is the hefty hardback edition for those who really love their smartphones. Its competition no longer seems to be the company in Cupertino. It is more a benchmark than a bestseller now. In some ways, it is reminiscent of what the Pixel and Nexus used to be – a statement of intent and ability, rather than a pursuer of sales.

The OnePlus 9 (if that’s what they call it), perhaps even the Mi 11, or the next Realme budget flagship…or maybe its very own Note…almost every Android flagship, whether budget or premium, will have to bear comparison to it. Not in terms of sales. But for sheer ability and performance.

In the words of Brando:

Was this article helpful?
YesNo
TechPP is supported by our audience. We may earn affiliate commissions from buying links on this site.
Read Next
Samsung Galaxy Unpacked 2023: Galaxy S23 Ultra with 200MP, Galaxy Book 3 with...
#Opinion #samsung #Samsung Galaxy S21