The Realme X7 Pro marks Realme’s return to the budget flagship sector, after a brief break following the Realme X3 Superzoom last year.
The X7 Pro marks the first time Realme has used a MediaTek chipset in one of its high-end devices, opting for the Dimensity 1000+ chip.
The phone ticks almost all flagship boxes, but we feel loses out on a “special something” that would have made it a compelling rather than a competitive option.

It took its time getting there but once Realme ventured into the budget flagship segment, it did so with telling effect. The X2 Pro did very well, the X50 was one of the first 5G devices in the Indian market and even though the X3 and X3 Zoom got mixed reviews for their displays, they did bring very decent hardware to the market at surprisingly affordable prices. The Realme X7 Pro 5G is, however, a slightly different creature. At its price of Rs 29,999, it is bang in the budget flagship zone, but is perhaps, well, the most routine flagship we have seen from Realme. Here’s our Realme X7 Pro review. 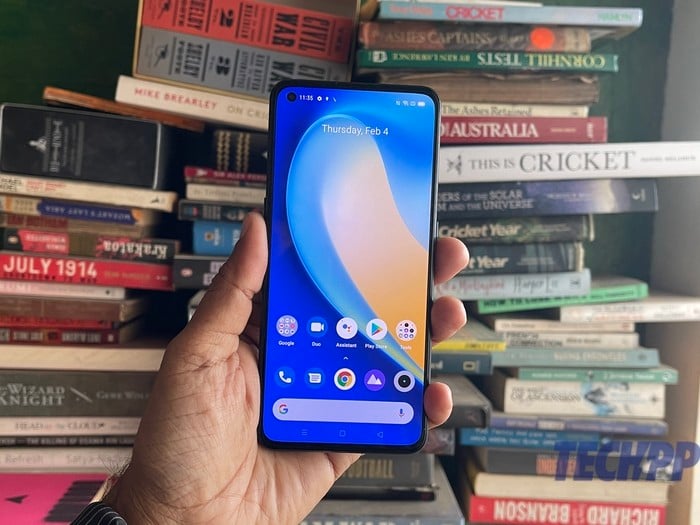 So much business as usual

That is because unlike its predecessors, which brought something new or rare to the table – the X2 Pro had a fantastic display and great sound, the X50 Pro had 5G, and even the X3 Zoom came in with a remarkably good camera arrangement – the Realme X7 Pro seems to be playing more of a consolidating game. It kind of ticks the boxes you would expect from a budget flagship, but for once, it does not proceed beyond them.

And this begins from the very design. As we pointed out in our first impressions of the phone, it is as not as if the Realme X7 Pro 5G is bad-looking. Far from it. It cuts a smart, sleek figure and is impressively slim at 8.5 mm. But it also does not really stand out not just from the crowd but also from its own siblings – some would even say it looks way too similar to the Realme 7 Pro. We have seen both the Fantasy and the Mystic Black editions, and while neither will turn heads away, neither will turn heads either.

The hardware too is similar. It is definitely very good, but there is nothing really that will make people lookup in pleasant surprise. There is a 6.55-inch Super AMOLED display with a 120Hz refresh rate, a touch sampling rate of 240Hz, 91.6% screen-to-body ratio, a good in-display fingerprint sensor, a quad camera arrangement spearheaded by a 64 megapixel Sony IMX686 sensor, and backed up by an 8-megapixel ultra wide sensor, a 2-megapixel macro, and “B&W Portrait lens”; a 32-megapixel selfie snapper; a large 4500 mAh battery with 65W Dart Charge support and a charger in the box too, as well as 5G connectivity, apart from the usual options. 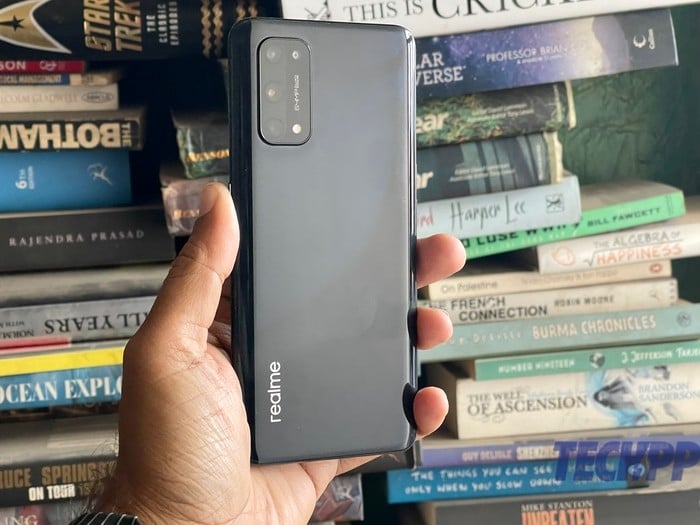 Perhaps the most outstanding feature of the spec sheet is perhaps the MediaTek Dimensity 1000+ chip that powers the phone (the second phone with this chipset in India after Oppo Reno5 Pro 5G), aided with 8 GB of RAM and 128 GB of (alas, non-expandable) storage. The chip marks MediaTek’s return to the flagship chip wars and claims to be as good as, if not better, than the Snapdragon 865 when it comes to processing prowess. Round that off with stereo speakers, 5G support, and RealmeUI 1.0 running on top of Android 10 (again, alas), and what we have is a good budget flagship spec sheet, but with nothing really jumping out at one.

This “par for the flagship course” feeling persists when you use the device too. In terms of performance, the Realme X7 Pro 5G is a very good phone. It does not really stumble at any place and the AMOLED display is a very good one, with slightly punchy colors and good brightness levels. The MediaTek Dimensity 1000+ on the phone handles high-end games like Call of Duty and the Asphalt series very well, and the overall performance we got was definitely very comparable to high-end Android flagships. We felt that the overall smoothness of operation was not exactly on par with the experience on a OnePlus 8T or a Xiaomi Mi 10T, but it was not too far away from it either. Perhaps a few software tweaks would change matters in that regard. The dual speaker arrangement is a slight let down – yes, the presence of stereo speakers is more than welcome but the volume is a little disappointing. And well, while we understand the exclusion of the 3.5 mm audio jack at higher price points, we do wish Realme had retained it here.

Losing the camera edge a little? 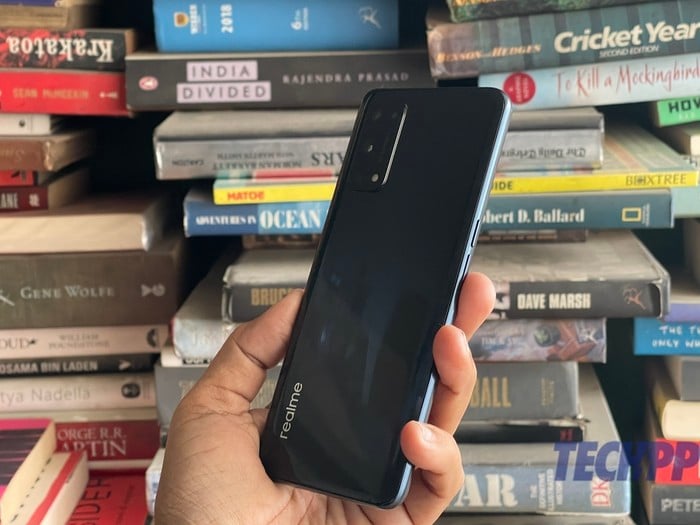 In the camera department, the Realme X7 Pro 5G is a surprisingly mixed bag. Surprising, because until about a year ago, the camera used to be a Realme strength. However, the period since the Narzo has seen the brand get a little inconsistent here and the X7 Pro 5G reflects this. There is no doubting the potential of the 64-megapixel Sony IMX 686 sensor with f/1.8 aperture which is supposed to be an improvement over the IMX 586 that is seen in so many flagships, but the results did not always back it up. We are not sure if this is something to do with the ISP on MediaTek chipsets. We sometimes got very good pictures with great colors and detail, but on other occasions, we saw images that seemed a little washed out. The low light performance even with Nightscape mode was a little bit disappointing, to be honest – and we did feel the absence of OIS here. As the scenes get darker, the dynamic range also drops, causing the shadows to be crushed in many scenes.

And as in so many cases, we were not too convinced by the “portrait mode” and “macro mode” – we did not get anything really exceptional out of them. Video similarly turned in mixed results. What we need to stress here repeatedly is that at no stage could the Realme X7 Pro’s cameras be called bad (there are some funky shooting options on it), but they did not seem too far a step ahead of the OnePlus Nord, which itself was no camera wizard. We really think the Realme X3 Superzoom had much better cameras.

In terms of battery life, the X7 Pro 5G will last out a day of normal usage. This is again largely expected of a modern-day flagship, although it is well below the big battery lives of the Mi 10i and the Samsung Galaxy M51. One area where the X7 Pro 5G shines is its extremely fast charging – a 65W charger in the box with support for SuperDart Charge means that the phone gets charged in slightly over half an hour. But then again, we had seen something similar in the Realme 7 Pro, which comes at a lower price tag.

Realme X7 Pro Review: Gets a lot right, but no X factor

And that really is the curse of the Realme X7 Pro 5G. It takes no missteps really. There is nothing about the device that can be called sub-standard. It is a rock-solid device that does everything well. But the challenge it faces is that nothing it does actually leaps out at you – at no stage did we ever feel that we were getting something that was not available on any other device in its price range. That might sound like a very unfair criticism, but take our word for it, this is a phone for those who really want the Realme UI experience with some gaming muscle thrown in – else what you get here is not really unique. Speaking of which, we do wish Realme would get on the Android 11 bandwagon, and also make a few more tweaks to its own UI. 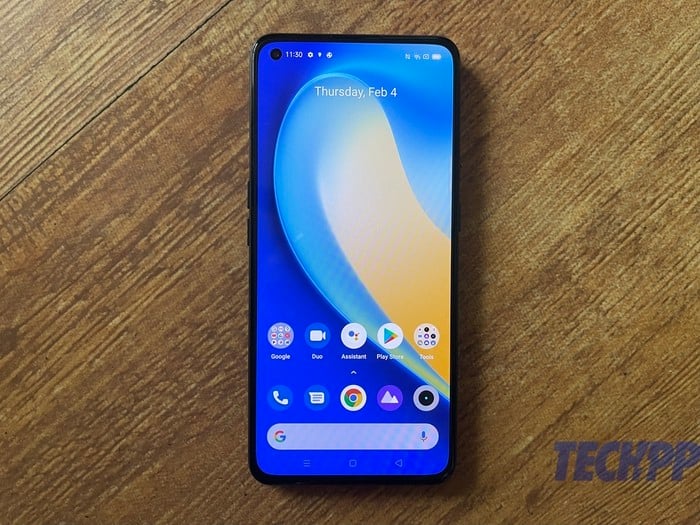 So, should you be investing in the Realme X7 Pro 5G? At its price of Rs 29,999 for its sole 8 GB/ 128 GB variant, it does deliver everything you would expect from a budget flagship. But it does not do anything outstandingly spectacular. And that is ironically because a lot of the features it sports are seen in not just the competition, but even its own lower-priced siblings. The Dimensity 1000+ pulls it out of the mid-segment but its other components and design pull it back into that zone.

It is a good option for those who want a very good multimedia or gaming phone for about Rs 30,000, thanks to that display and speakers, but it is more budget than budget flagship right now. Indeed, many might feel (and we are among them) that the Realme X3 Superzoom with its freakishly good cameras and Snapdragon 855+ chip has a clear edge over it, notwithstanding a slightly dull display. Similarly, many would feel that for Rs 29,999, they could end up with a 12 GB/ 256 GB edition of the still-very-good OnePlus Nord. Adding to the fun is the super large battery and display sporting Galaxy F62 from Samsung that adds yet another dimension to the division. And of course, those wanting a slightly more premium design would point to the very formidable Oppo Reno5 Pro 5G and the Xiaomi Mi 10T, both of which come with stiffer price tags but have distinctly premium feels about them. 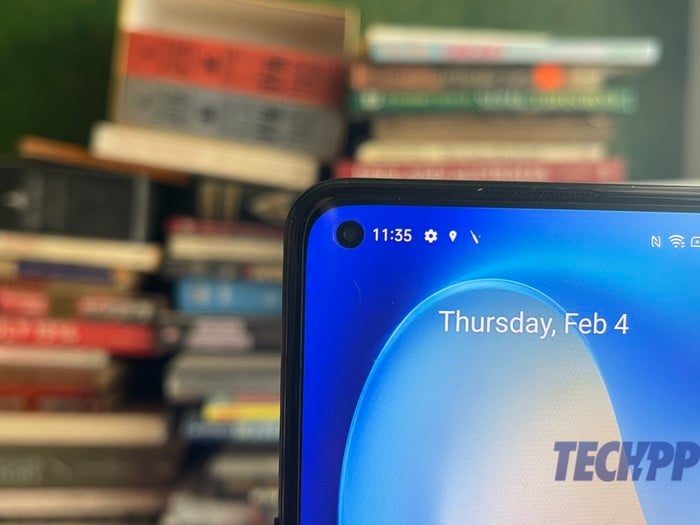 The Realme X7 Pro, to be fair, is not really overwhelmed by this competition. In fact, it can hold its own against them (yes, we will be making comparisons) and even beat it back on some fronts. But significantly, unlike its predecessors, it does not exactly beat its competition by a big margin in any department.

It is one of those phones that has everything going for it. But no X factor. Perhaps a “special edition” would help?