Vivo threw its hat into the camera flagship market last year with the very good X50 Pro. And this year, it has followed that up with the X60, the X60 Pro, and the X60 Pro+ (such is modern phone nomenclature), complete with Zeiss optics collaboration. The X60 Pro, as we discussed a few days ago, stuck to a three-camera set up on the back, was powered by a Qualcomm Snapdragon 870 chip, and had a design largely similar to the X50 Pro (not a bad thing at all). The X60 Pro+, however, is cut from a very different cloth. 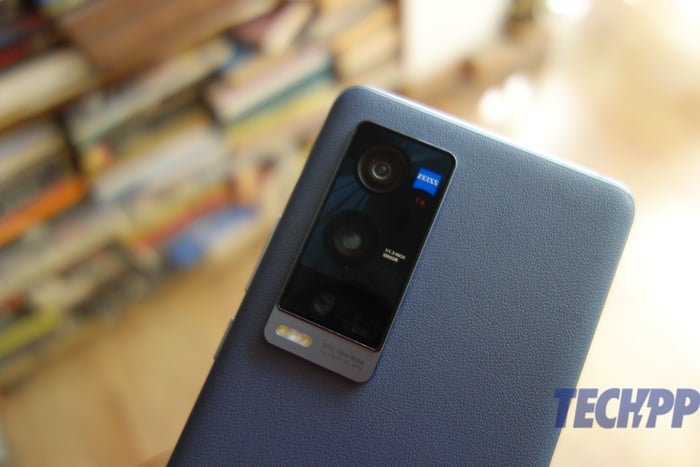 It’s a X60, and a Pro, but it feels and looks different

And that becomes evident from the moment you clap your eyes on it. Unlike the X60 Pro which has a frosted glass finish, the X60 Pro+ has a very textured back, where it uses what it calls Vegan Leather. It certainly feels very different from anything out there and makes a welcome change from the glass backs out there. There is only one shade – Emperor Blue – and from what we can see, while it can pick up some dust, it is remarkably smudge-resistant. It is a little reminiscent of the Sandstone backs of the early OnePlus devices, albeit with a slightly more premium feel. It also has a rectangular camera unit like the X50 Pro, arranged in two small steps (dust collectors, alas, although they look nice), and comes with the blue Zeiss logo and Vario Tessar branding.

The camera unit is slightly larger as compared to the X60 Pro, but that is due to the presence of one more camera. More of that later. The front and sides are the same as the X60 Pro – a 6.56-inch AMOLED display (with Schott Xensation protection) with a punch hole notch in the top center, and a metallic frame with the volume buttons and slightly textured power/display buttons on one side, the USB Type C port, SIM card slot, and speaker on the base, and a totally plain left side and top – the top carries the word “professional photography” just like on the X60 Pro. 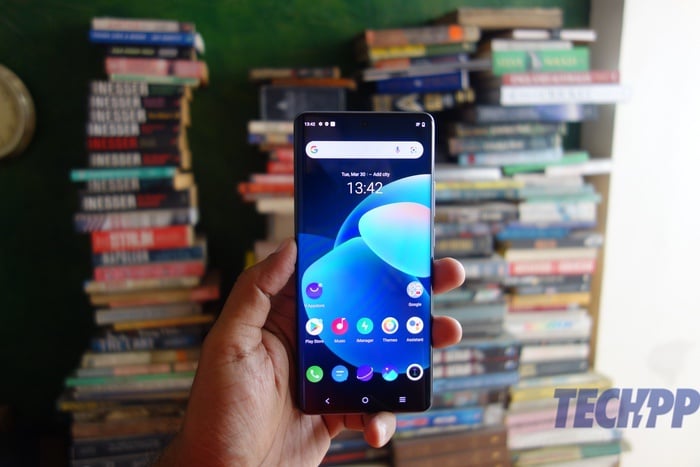 The height and width are very similar to the X60 Pro, but at 9.1 mm, the Pro+ is thicker than the 7.59 mm thin X60 Pro (that jutting camera unit on the back, we think). It is also slightly more heavy at 191 grams as compared to the 177 grams of the X60 Pro. But all in all, that back and the overall clean finish give the Vivo X60 Pro+ a very premium and yet solid feel. Mind you, we would have liked an IP rating on it, but all said and done, this is one of the most “different looking” Android devices out there, thanks to that back. And one of the few we really feel comfortable using without a cover. 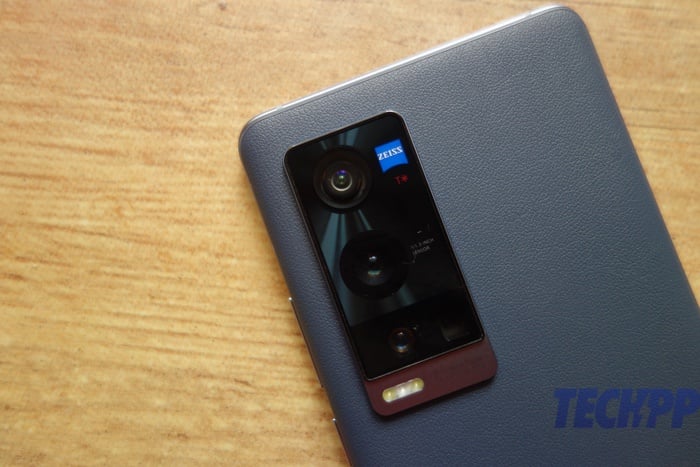 The hardware on the Plus avatar of the X60 Pro also is different. Yes, the display is a curved AMOLED, has full HD+ resolution, and has a 120 Hz refresh rate. But running it is the current flagship favorite chip, the Qualcomm Snapdragon 888, as compared to the 870 on the X60 Pro. And it comes with 12 GB RAM (LPDDR5 as compared to LDDR4x on the 60 Pro) and 256 GB storage (non-expandable), making it one of the most well-specced devices out there. Of course, there is 5G connectivity as well, and support for hi-res audio (no stereo speakers or 3.5 mm audio jack, though). All that is more than enough to park in the flagship segment, but then come to the cameras. And what cameras they are. 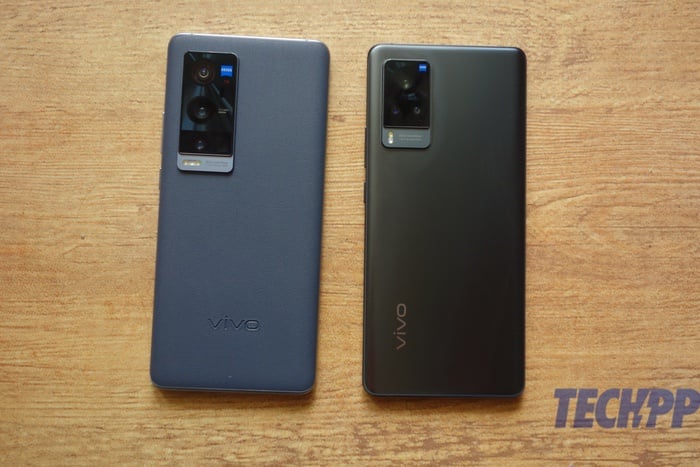 While the X60 Pro did not seem to have gone too crazy with the megapixels, going with a 48 megapixel main Sony IMX 598 sensor (with Vivo’s Gimbal stabilization)and two 13 megapixel sensors, the X60 Pro+ is more liberal. In fact, we would say that in terms of specs, this is perhaps the most powerful phone camera in India right now. There are four cameras at the back, not three, and leading them is a 50-megapixel GN1 sensor with Vivo’s OIS, then comes the Sony IMX 598 48-megapixel ultrawide sensor with Gimbal Stabilization, a 32-megapixel sensor, and another 8-megapixel periscope telephoto lens. There’s another 32-megapixel sensor in front for selfies. 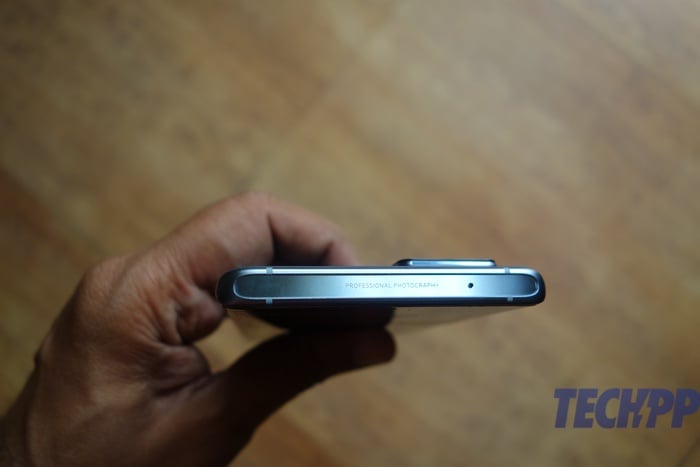 All of that adds up to some very serious camera muscle, with the Zeiss touch thrown in for good measure. Yes, you get the famous Zeiss Biotac portrait style here, Pro sports mode and kid snapshot mode, and a whole truckload of other shooting modes and effects for both stills and videos. It is interesting to see Vivo use conventional OIS as well as its own Gimbal Stabilisation in this device. We do not quite know how well that will turn out, but in terms of potential, we repeat – this is perhaps the best-equipped phone out there in terms of cameras right now.

Running all this is the task of a 4200 mAh battery which comes with a 55W with support for Flash Charge. On the software side, the phone runs on Funtouch OS 11.1 on top of Android 11 – too cluttered for some, feature-rich for others.

Pricey, but with immense performance potential 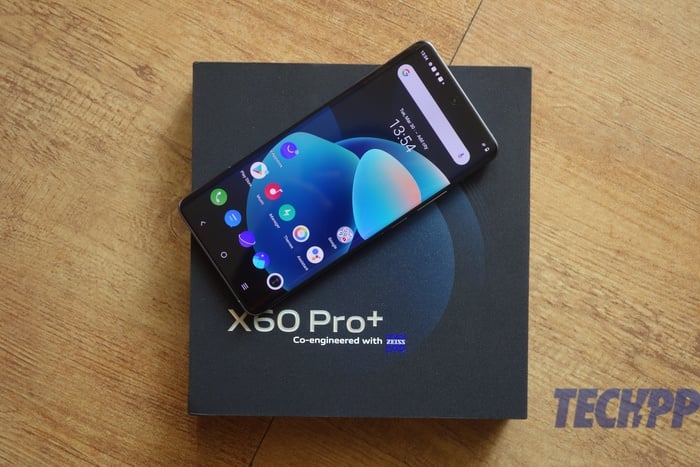 And it is that combination of cameras and that processor topped off with other hardware and a very “different” design that makes the Vivo X60 Pro+ seem a very formidable proposition. Yes, there are some who might feel its Rs 69,999 is a little on the higher side, especially as it comes into the zone of the OnePlus 9 Pro and even the iPhone 12 mini. But it brings a whole lot to the performance table, be it in terms of gaming or photography, and on paper, more than holds its own against those huge names. Whether all that translates into performance will be revealed in our review. As of now, it is simple to say that the Vivo X60 Pro+ has immense performance potential. Those cameras are going to be crucial in determining whether it slots in alongside the top Android flagships, or actually overtakes them. We would not rule out the latter.

Was this article helpful?
YesNo
TechPP is supported by our audience. We may earn affiliate commissions from buying links on this site.
Read Next
[Face Off] Vivo T1 vs Redmi Note 11
#First Cut #First Impressions #Vivo #Vivo X60 Pro