Xiaomi throws the tech kitchen sink at its flagship! 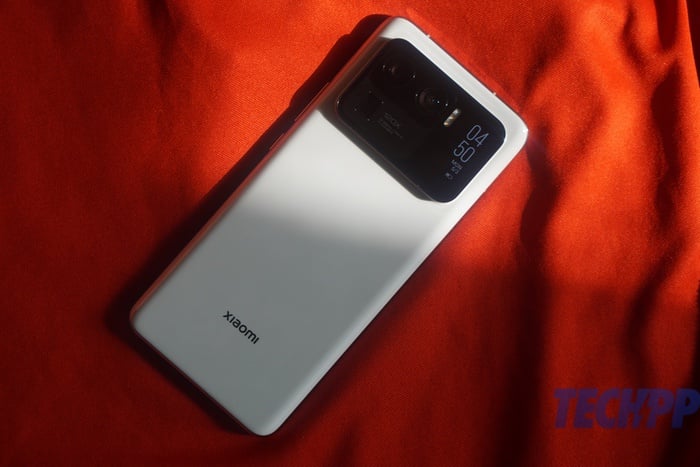 And ah, that brings us to perhaps the most striking non-spec aspect of the phone – its design. We have been getting used to camera bumps on phones in recent times. But if other phones had bumps, the Mi 11 Ultra has a speed breaker. The camera unit on the back is literally like a black slab placed on a ceramic floor (yes, the back is ceramic – no glass, glastic, or carbonate for this flagship). You almost feel you can pick it off the phone as it seems magnetically attached to it. It is so prominent that you can dangle the phone from it on some surfaces (window frames, table edges, and so on), although we would not recommend doing so.

The reason the camera unit is so big is that it actually packs in a fair bit. There are two large circular camera lenses, and rather interestingly, a smaller rectangular one (it has been a while since we saw one like that on a flagship), a flash and surprise, surprise, a secondary 1.1-inch AMOLED display, for notifications and framing the odd selfie. That camera/display unit is almost like an independent entity in its own right on the back. You may love it or hate it, but the fact is that it gives the phone a very distinct identity. There is NO chance that you can mistake this phone for any other. We got the white variant and it looks very striking with the dark camera unit on it giving us Pureview 808 feels, albeit in a more classy manner. 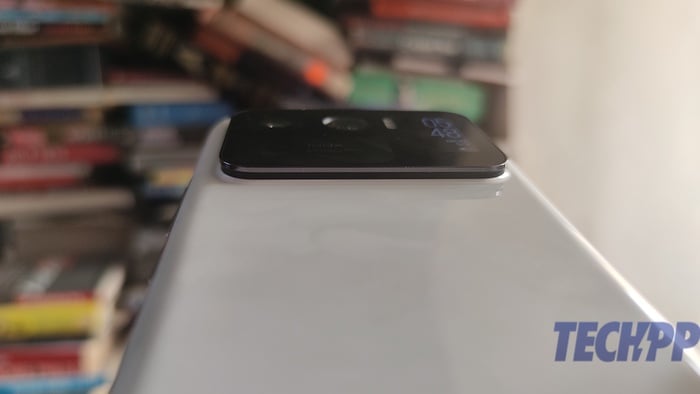 That said, we do not like the way the phone rests on that bump when you place it back down, and we suspect those lenses might take some smudging too. In fact, thanks to that rear display, this might actually be the first phone that we might actually prefer placing face down on a table or surface – it seems more level then! The phone is very solidly built, though, and comes with an IP68 rating, so it can actually take a dunk in the water. 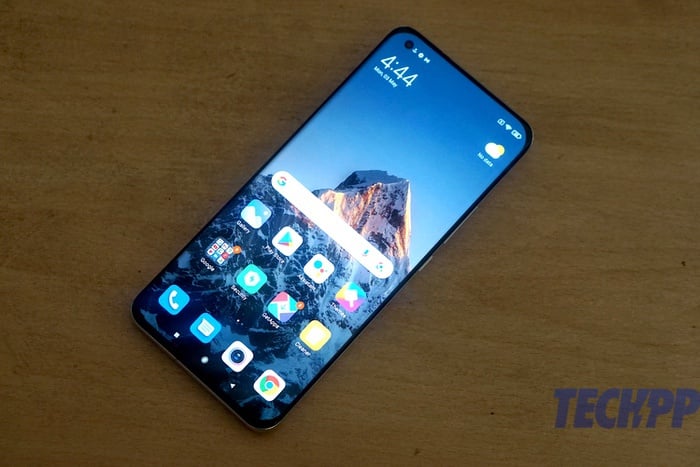 The front and sides of the Mi 11 Ultra follow a largely predictable design template. The front has a tall 6.81-inch display, with a tiny punch hole notch in the top left corner, and Gorilla Glass Victus protection. You have the power/display and volume rocker on the right, and the fingerprint scanner is under the display and not on the side (boo!), while the base houses the SIM card tray and a USB type C port. There are speaker grilles on the top and the base, and the left side is totally plain. There is also an infrared port on top, although there is no 3.5 mm audio jack (we guess flagships need them no). We would have liked a dedicated camera button, to be honest, but that’s hardly a dealbreaker. 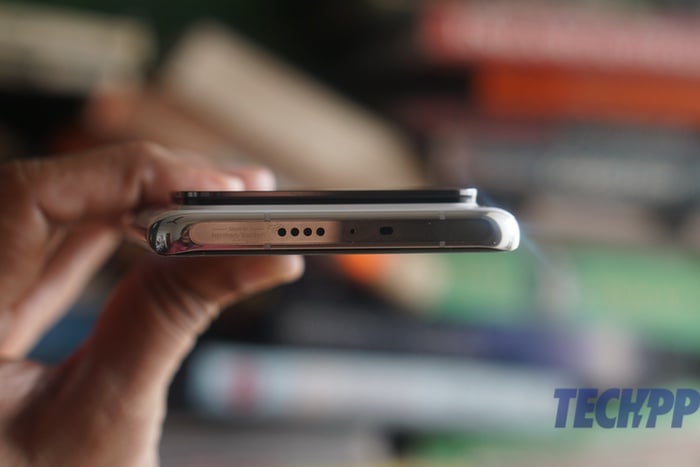 What is amazing is that in spite of that rather spectacular bump on the back, the Mi 11 Ultra is not crazily thick – it is a very respectable 8.38 mm thin. It is definitely on the tall side with a height of 164.3 mm but again it is not very wide (74.6 mm). That camera/display bump on the back, however, does make the phone feel a little top-heavy when you hold it. At 234 grams, it is on the heavy side and while it feels great in the hand – ceramic feels so much better than glass or plastic – you do feel sometimes as if the top of the phone is actually wobbling away from you, especially while typing in portrait mode.

It looks distinct, feels good, and while the weight distribution is odd, we guess one can get used to it, because…well, that camera unit is crazy special. 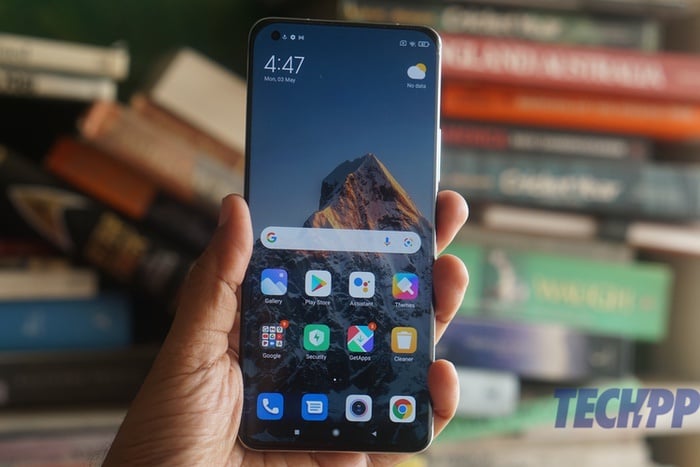 As we said in the beginning, Xiaomi has pretty much thrown the spec kitchen sink at this phone. The display is a large quad HD 6.81-inch AMOLED DotDisplay with a brightness peak of 1700 nits, and a very high Display Mate rating. Of course, that is just the front display. There is a smaller AMOLED display on the back as well, for framing selfies (which could be a bit of an ask) and seeing notifications and the time. Honestly, we think the display on the back is a bit on the unnecessary side, given its limited functionality and the fact that we are sure it adds to the size of that bump while also taxing battery and resources, but yes, it does give you the option to protect that camera bump by placing the phone face down (again, the only phone we have ever seen which we would consider placing in that manner). 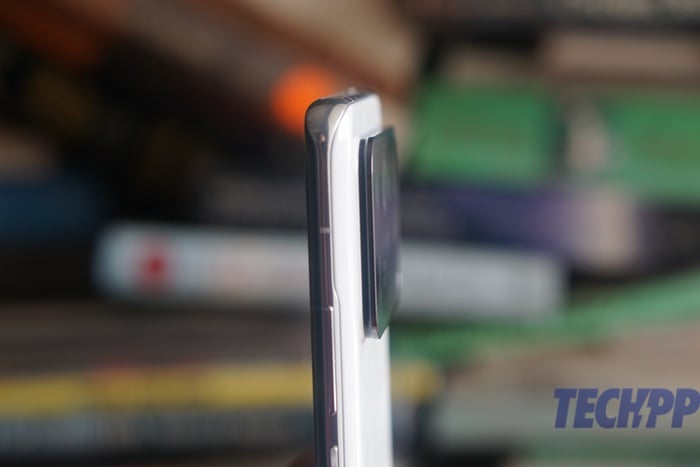 The other specs are very impressive too. You have a Qualcomm Snapdragon 888 processor, which is as good as it gets in the smartphone world at the time of writing, backed up with 12 GB of LPDDR5 RAM and 256 GB of UFS 3.1 storage. There is Hi-Res audio support, tuned by Harmon Kardon, and stereo speakers as well. Throw in a large 5000 mAh battery with support for 67 W wired and wireless charging, and MIUI 12 on top of Android 11, and you have a heavily stacked spec sheet, complete with Bluetooth, Wi-Fi, GPS, and infrared. 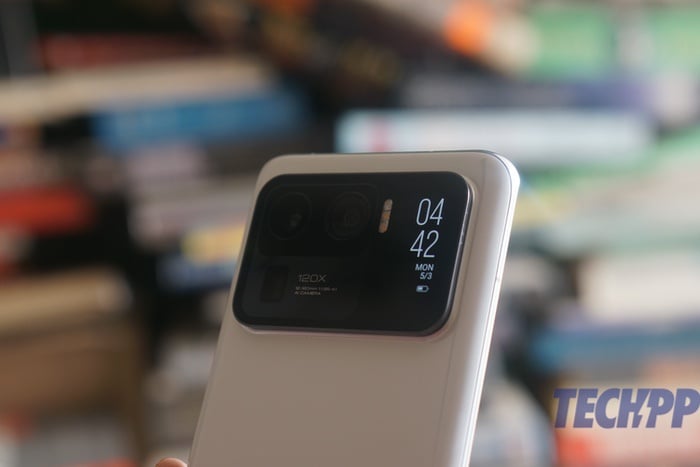 But if the hardware of the Mi 11 Ultra is a classic Android flagship fare, the cameras are a different proposition. Indeed, on paper, these are perhaps the most powerful cameras we have seen on a smartphone. At a time when most (non-Apple) brands go with perhaps one or maybe two big sensors and a few secondary ones (8-megapixel ultra-wide, 5-megapixel macro, 2-megapixel depth, -.1,98 megapixel nitro…don’t ask!), Xiaomi has simply taken the iPhone formula with three cameras on the back that are so evenly matched that calling any of them secondary seems unfair.

The news maker, of course, is the “largest camera sensor seen on a smartphone,” the 50 megapixel Samsung GN2 sensor with an 8 piece lens and a 1/1.12 inch sensor. And then there two half-inch 48-megapixel Sony IMX 586 sensors, one which delivers a 128-degree ultrawide view and another that adds a 5X optical zoom. That rectangular lens on the back – that’s the zoom (telephoto) camera. The 50-megapixel main sensor and the 48-megapixel telephoto both have OIS as well. And the 48-megapixel ultrawide also has autofocus which is sometimes missing in some ultrawide sensors. All three cameras are capable of shooting 8K video. See why we wanted a dedicated camera button? With all that muscle floating around, it would have been great to have a button dedicated to snapping or recording video, instead of trying to tap the screen or using the volume keys. 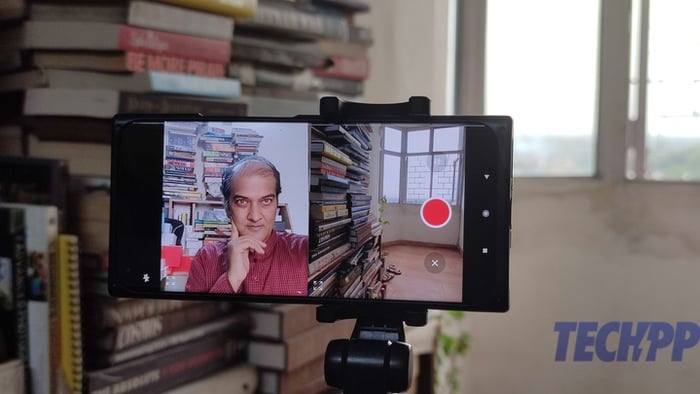 There are lots of shooting modes and special features too, but we will keep it simple: no matter which camera you use on the Mi 11 Ultra, you are likely to be using a high-quality, high-megapixel sensor. And you can switch between them even when shooting in 50-megapixel mode. That itself puts the phone in a zone of its own right now (Samsung had tried something slightly similar with the S20 Ultra, but its initial implementation had been a little dodgy), at least in the Android world. In pure megapixel terms, the Vivo X60 Pro+ does come within range, with its 50 megapixel main, 48-megapixel ultrawide, and 32-megapixel telephoto sensors (as well as an additional 8 megapixel one) along with Zeiss optics, but the gap in performance between those three is more discernible on paper than on the Mi 11 Ultra. The 20-megapixel selfie camera in fact seems a little superfluous, given that you can use any of the rear cameras for taking a selfie with a little help from that tiny AMOLED display on the back. Honestly, it makes one wonder if Xiaomi could have simply killed that notch on this phone. Well…that’s another story.

Premium pricing, but pretty much unique 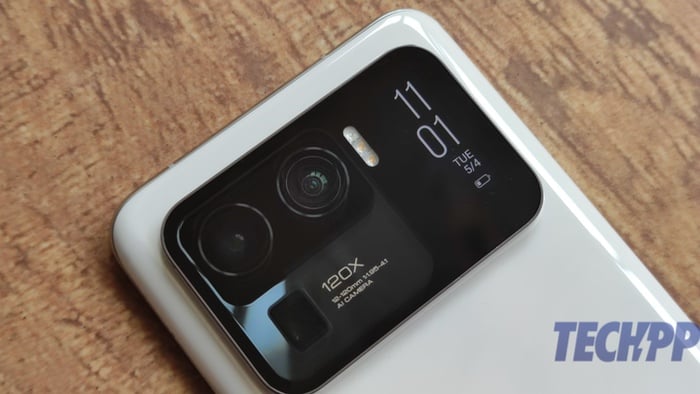 Is Rs 69,999 a hefty price to pay for all this? We will know for sure only after our review. But seen purely on paper, the Mi 11 Ultra serves up some staggering hardware for that price, and ticks just about every flagship box that you can think of. Yes, its design is going to be deeply divisive, but on paper, this has got to be one of the most well-specced phones in the Android world in most departments. And easily the most powerful one in the camera zone. Indeed, on paper, it packs enough to match and even outdo the Samsung Galaxy S21 Ultra (Android’s resident premium flagship), and if that does not tell you something, nothing will.

The most intriguing and uniquely shaped flagship of 2021 has set sail from Xiaomi’s port. Whether the voyage is a successful one in performance terms will be revealed in our review. And yes, we are going to be doing a special camera review for the device too.

Stay tuned. This promises to be…interesting.