Realme 8i Review: Jack of All Trades

Another day, another launch from Realme. This time it’s the successor to the popular Realme 7i – the Realme 8i. The smartphone boasts impressive specifications like a 120Hz display, a 50MP rear camera, a 5000mAh battery, and much more. 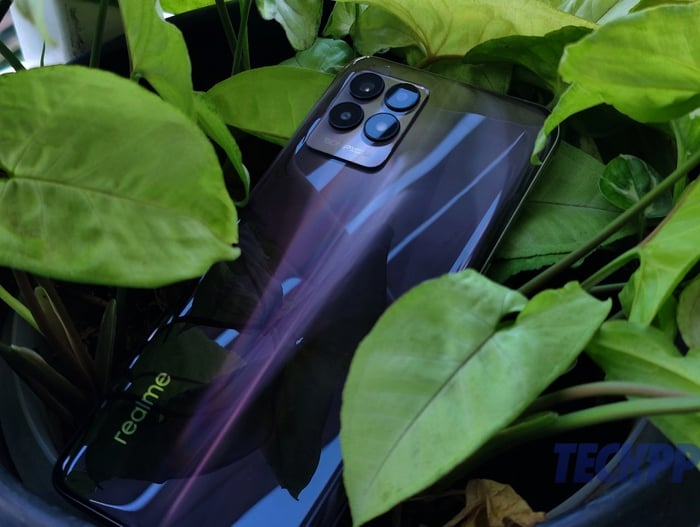 Like other phones from the company, this one also brings a number of new features and improvements over its predecessor. We have been using the Realme 8i for over a week now, and here is our review of the device.

We have the device in Space Black color, and the design is pretty good and on par with other devices in a similar price category. I am glad the device does not have the bold “Dare to Leap” branding on the back like other Realme devices. Personally, I have never been a fan of that design element and always found it to be very flashy.

The power button is on the right side of the device, while the volume rocker is on the left. As for the quality of the buttons, they are quite tactile and are not mushy. The bottom grille houses the speaker and Type-C charging port. And, yay! The 3.5 mm headphone jack is still right next to the Type-C charging port. Also, the power button doubles as a fingerprint scanner, and it works flawlessly 10/10 of the time, so no complaints there.

The device is made entirely of polycarbonate, like most other budget devices. Is that a deal-breaker? Definitely not; the device feels quite sturdy and fits well in hand. However, it is a bit heavy at 194 grams. A Dragon Trail Pro glass protects the display, and there is also a pre-installed protective film, which is always a good thing and helps prevent scratches.

The Realme 8i has a fairly large 6.6-inch display (LCD) with a punch-hole selfie camera in the upper left corner of the display. The device covers 100% of the DCI-P3 color space and has a screen-to-body ratio of 90.8%. 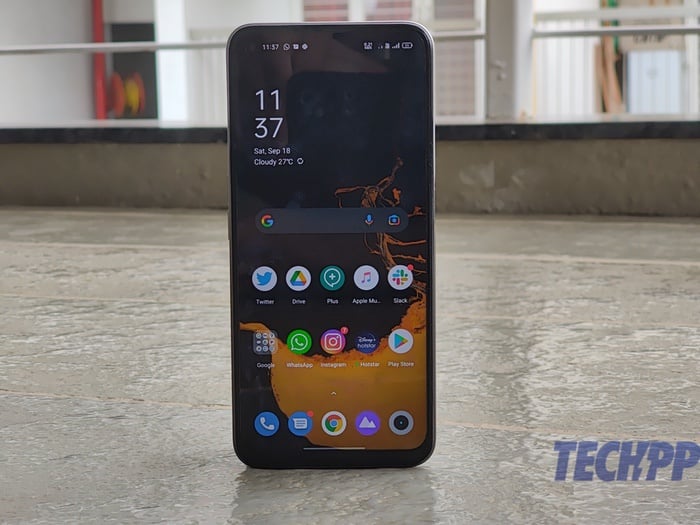 Unlike its predecessor, the Realme 7i, which only had an HD + display, this device gets a Full HD+ treatment that helps improve the overall experience. Not the resolution, but the refresh rate has also seen a jump from 90Hz to 120Hz. Scrolling felt much smoother thanks to the higher refresh rate, and we had no trouble navigating UI. The device intelligently switches between 30Hz, 60Hz, 90Hz, and 120Hz, depending on the task you are performing to conserve battery life.

Realme opted for an LCD display with a 120 Hz refresh rate instead of a 60 Hz AMOLED display, which may be a sticking point for some. Other than that, the display is pretty good for the price, with good color reproduction, and we had no issues consuming content on the device.

If for some reason, you do not like the color profile of the display, you can always adjust the profile in the device settings. Although the display is Widevine L1 certified, it does not support Full HD playback on both Netflix and Amazon Prime Video. We hope that Realme will fix this with a future software update. 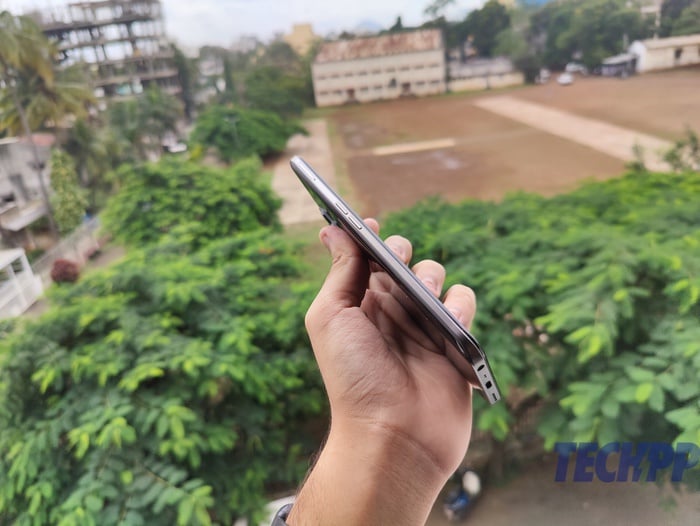 The brand claims that the Realme 8i is the first smartphone in India to feature the new MediaTek Helio G96 chip. Mediatek Helio G96 is the successor to the popular G95 and brings some performance improvements. The chip is based on a 12nm manufacturing process and is clocked at up to 2.05GHZ and is available with either 4GB or 6GB LPDDR4X RAM.

The Mali-G57 MC2 handles the GPU duties. During our daily usage, we found the device to perform quite decently. Navigating the UI and launching applications was pretty smooth, thanks in part to the 120 Hz. When we unboxed the device and started using it, we had to deal with occasional judder and frame dropouts, but Realme released an update that quickly fixed this issue, and performance has been fine ever since.

But what about gaming? The G96 in the Realme 8i surprised us in this area. Being a budget device, our expectations were pretty low, but the device exceeded our expectations. It’s still no match for a flagship, and you should not buy it if gaming is your top priority, but if you are a casual gamer who only plays a few BGMI matches, it’s good. When playing BGMI, the device consistently delivered 38-40Fps on Smooth+Ultra settings. In addition, temperatures were also under control, so there are no issues with overheating, which one might generally assume since it is a Mediatek chip.

We ran a bunch of tests on the Realme 8i, and the results are as follows:

As you can see, the Helio G96 is very capable, and since it is a new chip, we expect the performance to get even better as it is further optimized for the device.

If there were one thing that detracts from the Realme 8i experience, it would be the software. The Realme 8i runs on Realme UI 2.0, which is based on Android 11 and is packed with bloatware; fortunately, most of it can be uninstalled. We also had some bugs with UI, but we hope that the company will iron out these bugs in the coming months.

Anyway, Realme UI has come a long way and is feature-rich. The UI is much smoother and optimized now, and we have not had any issues with ADS or spammy notifications during our time with the device. 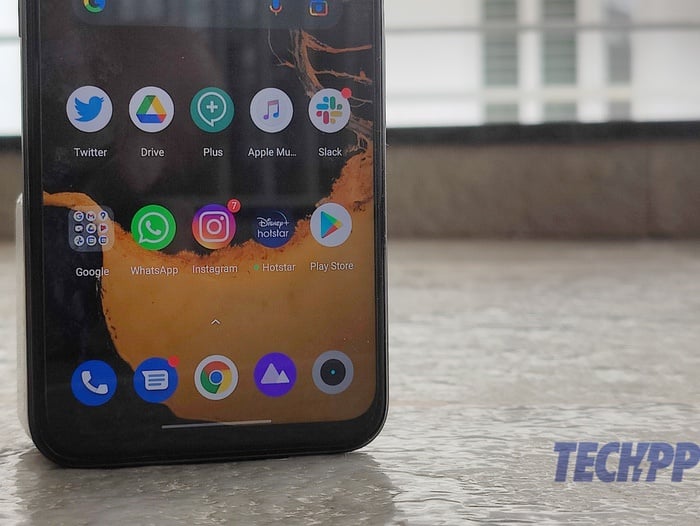 A feature that has enjoyed great popularity among smartphone brands lately is also present here. We are talking about the Virtual RAM expansion feature. Realme claims that you can expand the RAM up to 5 GB with the virtual Ram function. Apart from that, we did not feel that the virtual RAM feature makes a big difference, but we had the 6GB RAM variant with us, and the feature might be useful for users of the 4GB RAM variant.

The device has a fairly large 5000 mAh battery that performs very well. While the battery life is very good, there is still a lot to be said about the charging times. With occasional use like social media, web browsing, watching videos for work (yes, work), and a few BGMI sessions, we averaged 6.5+ hours of screen life. 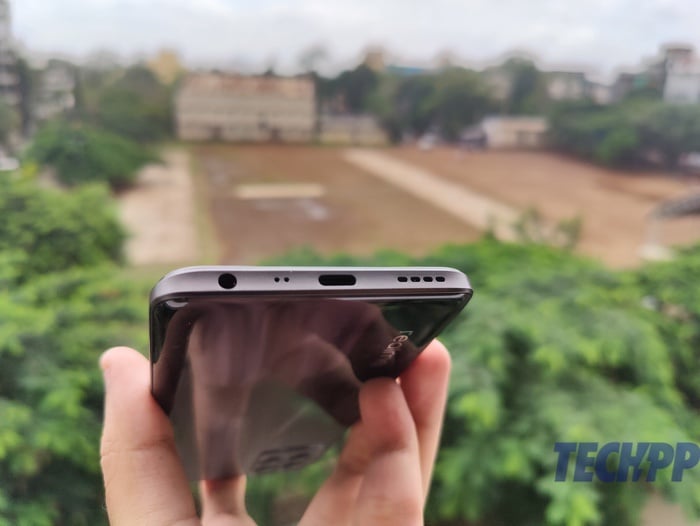 Realme includes an 18w fast charger that took well over 2 hours to charge the device from 0-100%, which is pretty disappointing coming from a brand that was one of the first to introduce 65-watt chargers to the masses. In fact, Realme’s own Narzo 30 in a similar price range gets the 30W treatment while still retaining a 5000mAH battery.

Like most other devices with a high megapixel count, the primary shooter takes pictures at 16 MP by default. However, there is a dedicated 50MP mode that allows you to capture full-resolution images. 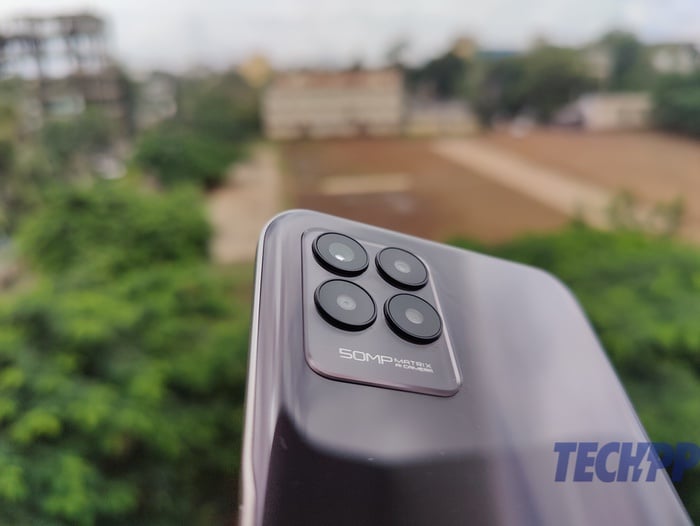 As for the actual image quality, you can take some good shots with the device in daylight. The images are sharp and have enough details. But the dynamic range could be even better, in our opinion. Apart from that, the color processing was a bit inconsistent, so it took a few tries to get the perfect shot.

The dedicated 50MP mode was decent and slightly improved the overall detail of the image but still did not make much difference to the final image.

How about low-light conditions and indoor lighting? Here the camera performs quite well. Yes, you lose a bit of detail, but it’s still pretty good. However, the device struggles a bit in extremely low-light conditions, and the pictures become a bit grainy. The special night mode helps, but it is still only average. In summary, the main camera is capable and does a good job at taking pictures.

We really missed an ultra-wide-angle lens because it gives the user more flexibility and is actually useful. The other two cameras on the Realme 8i are simply disappointing. To use the 2MP macro lens, you have to get very close to the subject, and the images are still not good enough because of the resolution. The B&W lens was also very average at best.

While the device certainly loses points on the rear camera due to the other two cameras, the selfie camera in the notch on the front was good. The selfies are sharp and have a good dynamic range and colors. However, the background was still glossed a bit. 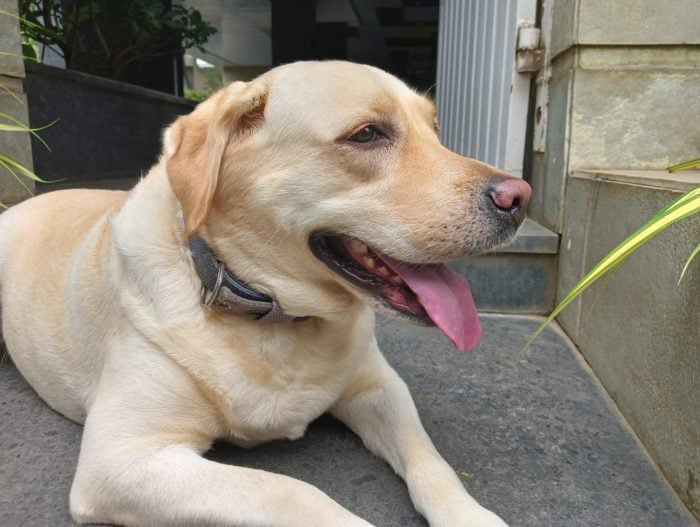 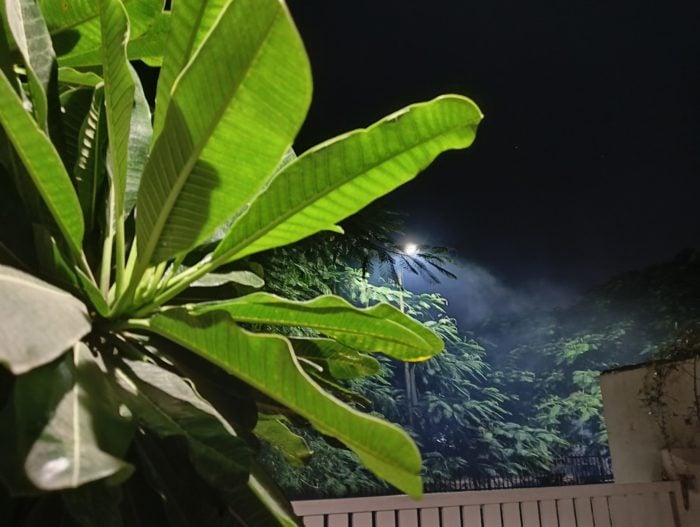 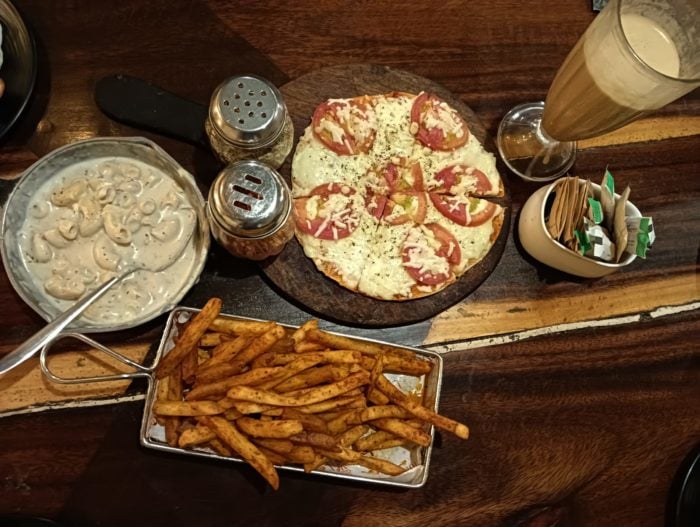 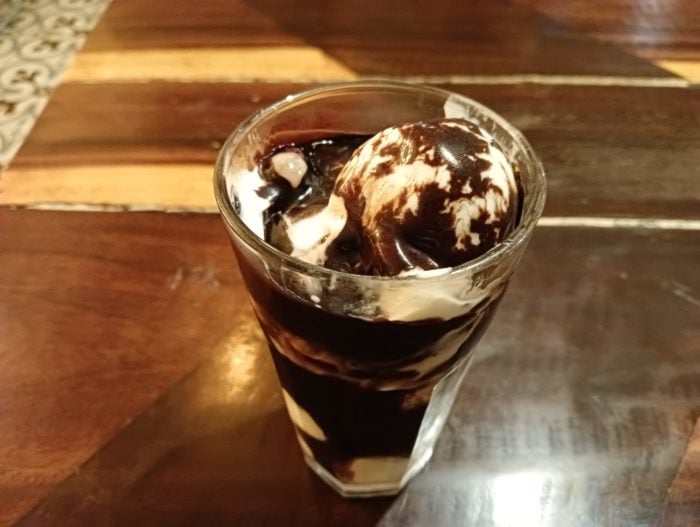 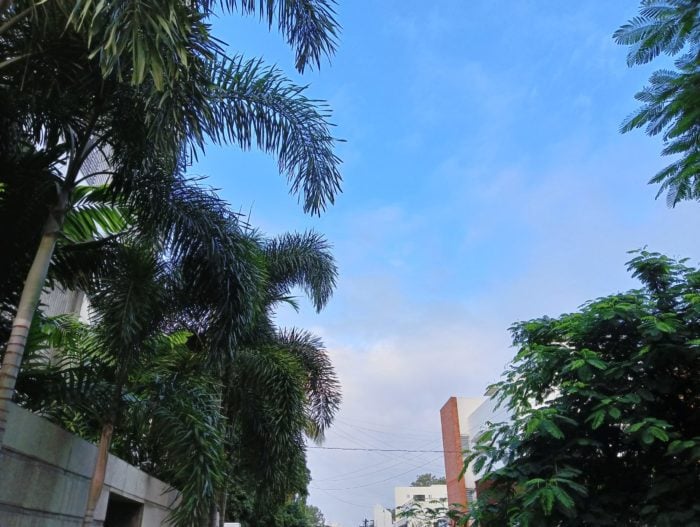 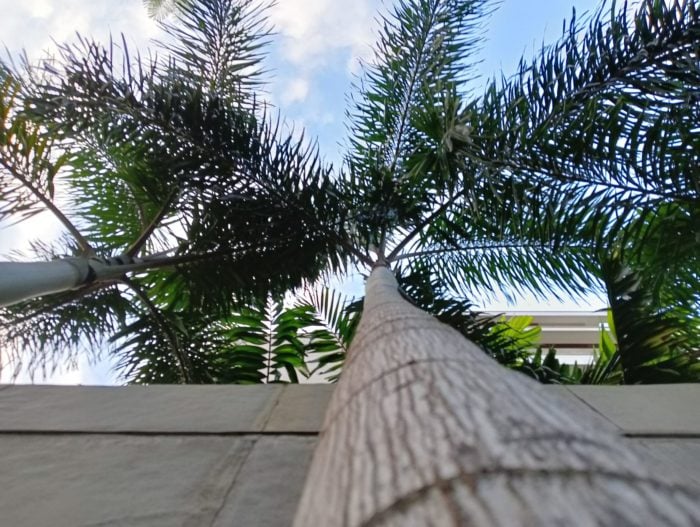 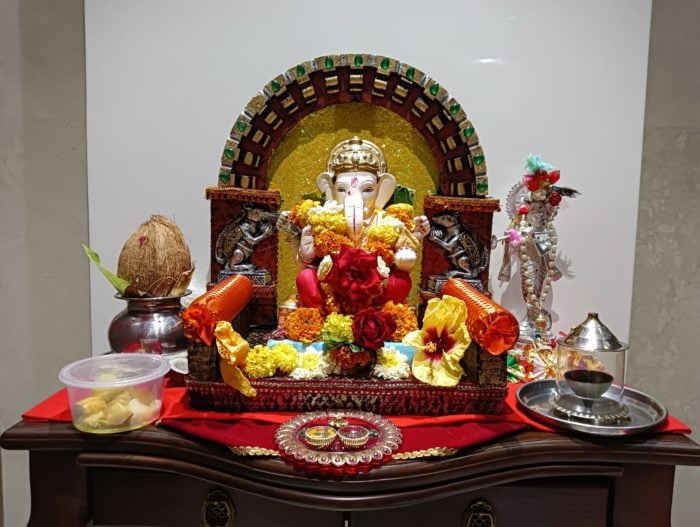 Like other parts of the software, the camera app is loaded with features. It offers various modes like AI enhancement, dual-view video, Pro mode, and more.

The Realme 8i can record video in 1080p and 720p. The video quality was decent, with a little color-shifting while recording the video. The recordings were quite stable, as the device does not have any special hardware for stabilization.

So what’s left? Oh yes, the portrait mode on pictures. The device does a good job with edge detection, and portrait mode worked quite well.

Overall, the Realme 8i camera is pretty capable for the price, lacking an ultra-wide sensor and poor 2MP cameras. 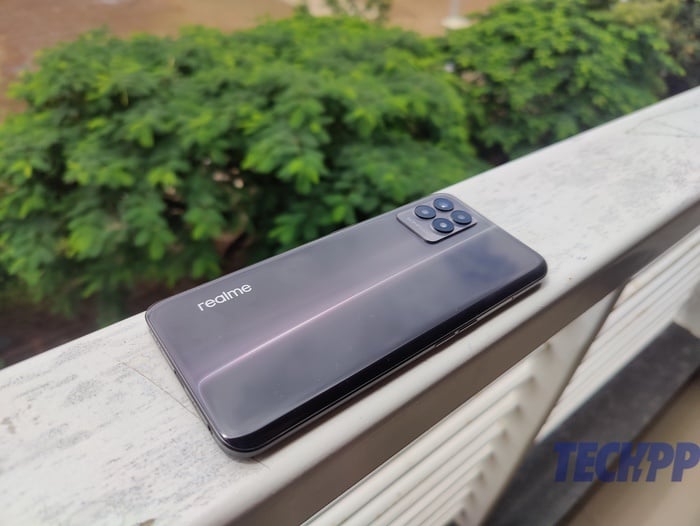 The Realme 8i has a single speaker that did a good job in our test. The speakers get quite loud and provide good bass and separation. As mentioned earlier, there is also a 3.5mm audio jack, and the output through it was pretty good. However, we missed the stereo speaker support that the competition already offers, and that makes a difference when watching videos on YouTube or listening to music.

Unfortunately, the G96 chipset in the Realme 8i is not 5G compatible, but that is not a big problem since 5G is not yet available in this country. The device supports both wireless bands, 2.4 GHz and 5 GHz. We tested the device on both, and it performed exactly as we expected. We have a 100 Mbps plan, and the device consistently delivered those speeds. In addition, the device also supports carrier aggregation, and it worked as expected. 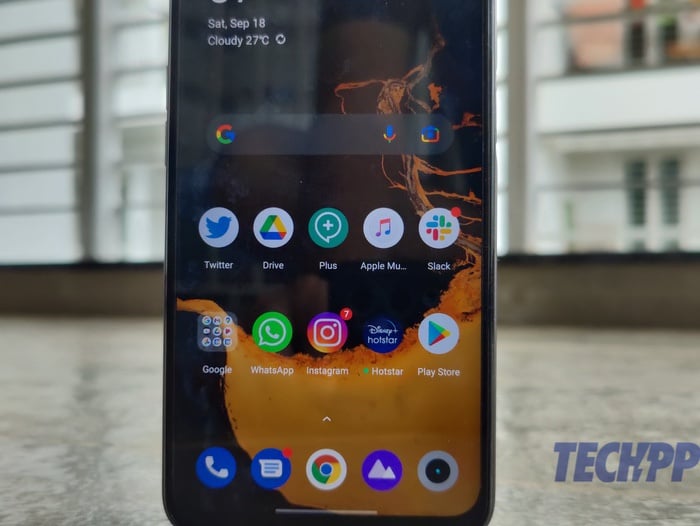 So should you buy the Realme 8i? The phone is available for Rs 13,999 for the 4+64GB variant and Rs. 15,999 for the 6+128GB variant. At this price, it faces some serious competition from one of the most popular devices in this segment – the Redmi Note 10, which comes with a Snapdragon 678 chipset and a Super AMOLED display. In fact, the 6+128GB variant of the 8i is priced very close to the company’s own Realme 8, which has 5G support and an 90Hz LCD display.

That said, if you are looking for a device that offers great battery life, decent performance, capable cameras, and more, you can consider buying the Realme 8i. Yes, it also has its fair share of shortcomings like slower charging and a single speaker, but the Realme 8i is a pretty good smartphone for the price if you can overlook those issues.