Its phones might be making most of the headlines, but OnePlus has been doing very well on the personal audio front as well. The Never Settling brand is one of the top Bluetooth earphone and TWS brands in the country and has now moved its Nord sub-brand into the audio zone as well. The launch of the OnePlus Nord Buds marks the entry of the Nord name into hearables and lays the foundation of what OnePlus claims is a Nord ecosystem. 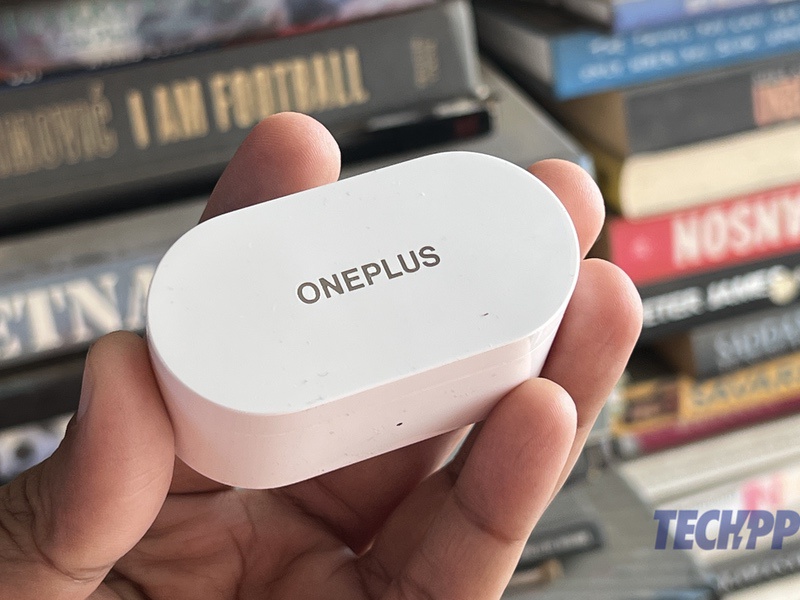 Smart design with a touch of fun

It is a very promising debut as well. The Nord Buds get a lot of things right, starting with their design. We got the White Marble variants and liked their slightly unconventional look with flattened stems with tiny mirror-like metallic discs on them for touch controls. Those reflective circles give the Nord Buds a very distinct touch. The case they come in is pill-shaped with a USB Type C port on the back and a connecting button. It is a little on the tall side and will fit into pockets easily but will also make them bulge a little, although, at just 41 grams, it is easy enough to carry.

A nice touch is the marking of the right and left buds on the case in orange (in red on the black variant). The buds are less than 5 grams each and comfortable to wear – they stay in place most of the time. They come with IP55 sweat and water resistance so that they can be worn during workouts or even in mild rainfall. There are two sets of eartips in the box, and you can choose the ones that fit you best. OnePlus has also included a USB to USB Type-C cable in the box, and the buds and the cable, as well as some basic manuals, come inside a very cute package. We thought it a nice touch, considering how mundane the packaging for these accessories is.

Easy to set up, and tap to control 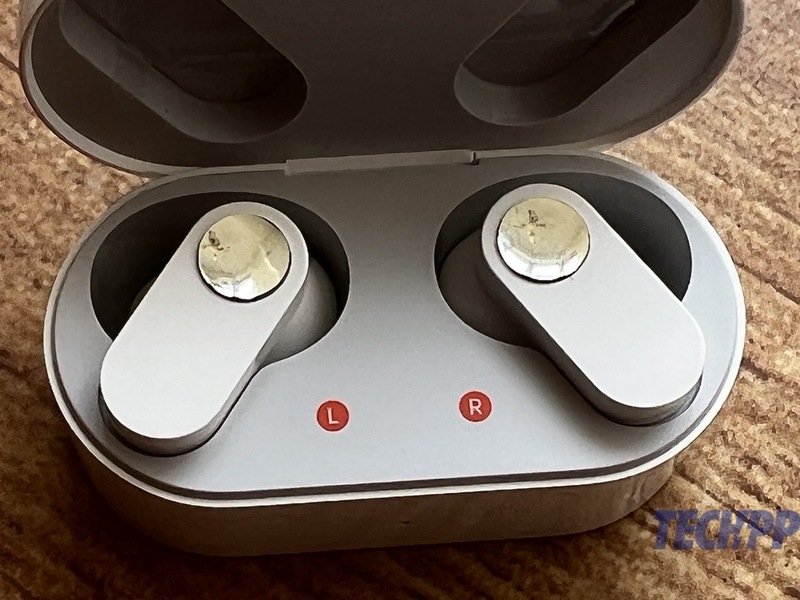 The Nord Buds are easy to set up. You just open the case and long-press the button on the back, which puts the buds in pairing mode. Then, head to Bluetooth on your phone, spot the Buds and connect. The Buds paired particularly seamlessly with the OnePlus Nord 2 CE Lite. We got access to an equalizer and even the option to customize controls right from the Bluetooth settings. Those on devices from other brands can pair through the Bluetooth settings but will need the Hey Melody app to access equalizers and customer controls. Unfortunately, the iOS version of the app does not support these TWS yet, so iPhone users will not be able to tweak settings.

The controls themselves are relatively simple. Everything gets done by one, two or three taps on the shiny disc on the buds. By default, these are mapped to play/pause on a single tap, the next track by double tapping and the previous track by triple tapping on either earbud. You change these settings and even give different functions to the left and right bud if you want a complex life. You also have the option to make double or triple taps to activate a virtual assistant and use a long press to switch between two of the most recently connected devices. For calls, a double-tap takes or ends a call. For some reason, this is not mentioned in the controls or even in their tutorial. 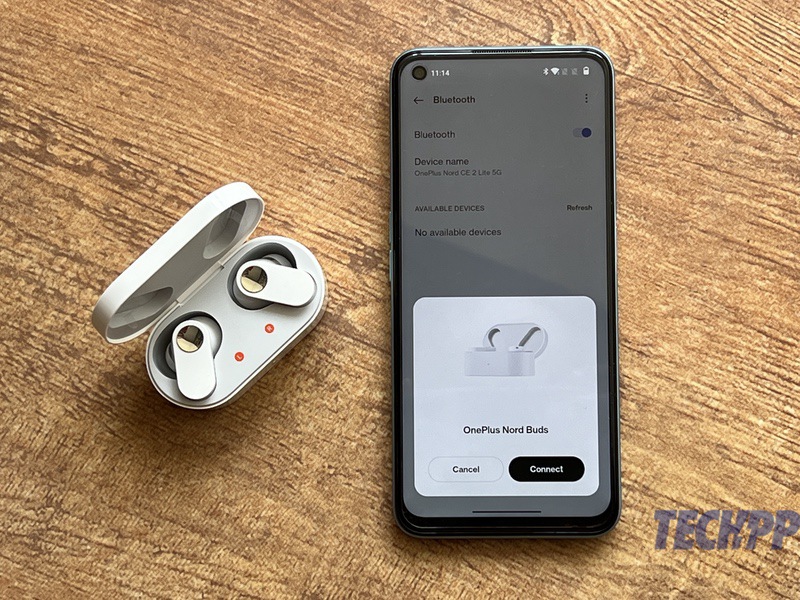 This “tap to do anything” system may sound simple enough, but it gets a little unpredictable beyond one tap. Each tap is also heard within the bud, allowing you to know it has registered, but there often seems to be a bit of a lag between tapping the bud and hearing the tap, especially on non-OnePlus devices. We also were sometimes unable to hear the taps when audio was being played at a loud volume. As a result, one ends up tapping more times than needed, leading to a fair bit of confusion. The TWS also do not pause playing if you take one of them out of your ear, so work on those taps! 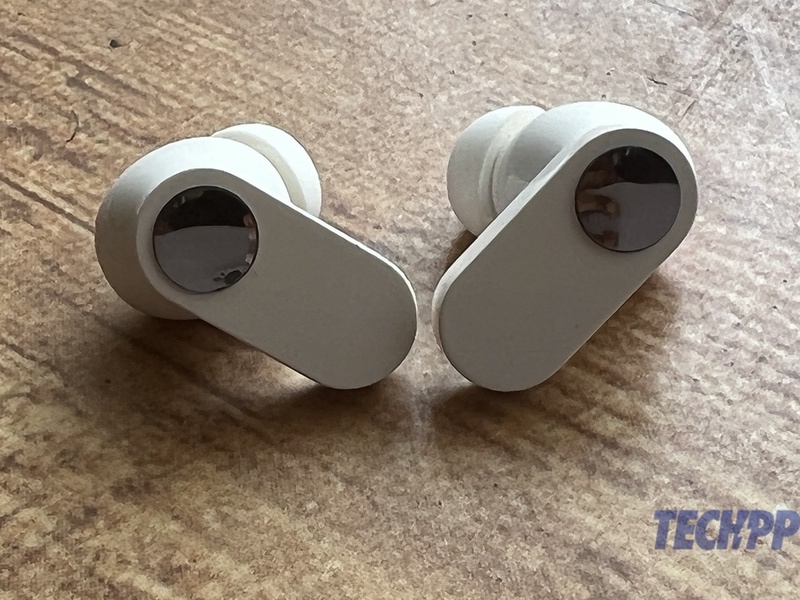 Where the Nord Buds really excel are in their sound quality. The audio is similar to the bass-accented sound we got from the OnePlus Buds Z2, so there is a gentle rumble to the heavier beats and lower frequencies. Clarity levels are very good, too, for the price point. Vocals can get a little lost in numbers with many instruments, but by and large, these buds will deliver a good listening experience on everything from pop to rock to hip-hop. The 12.4 mm drivers deliver good volume levels without distortion. We would call them very pleasant on the ears and buds, which handle most genres well.

They come with support for Dolby Atmos, but that is available only when you pair them with OnePlus flagships, including and after the OnePlus 7. Ironically, they do not support Dolby Atmos on the OnePlus Nord. There is no ANC on board (not surprising at this price), so remember to choose eartips for a good audio experience carefully.

Battery life is good as well. The Nord Buds deliver from six to seven hours of battery on a single charge and, along with the case, serve up about thirty hours of audio, which is impressive at this price. Support for fast charging means that ten minutes of charging gets you three hours of audio on the buds and another two hours on the case. The Nord Buds are handy enough for calls. The “tap twice to take or end a call” procedure can be a little erratic, and call quality is generally acceptable, but volume seemed a little on the low side.

Welcome to the hearable battle, Nord 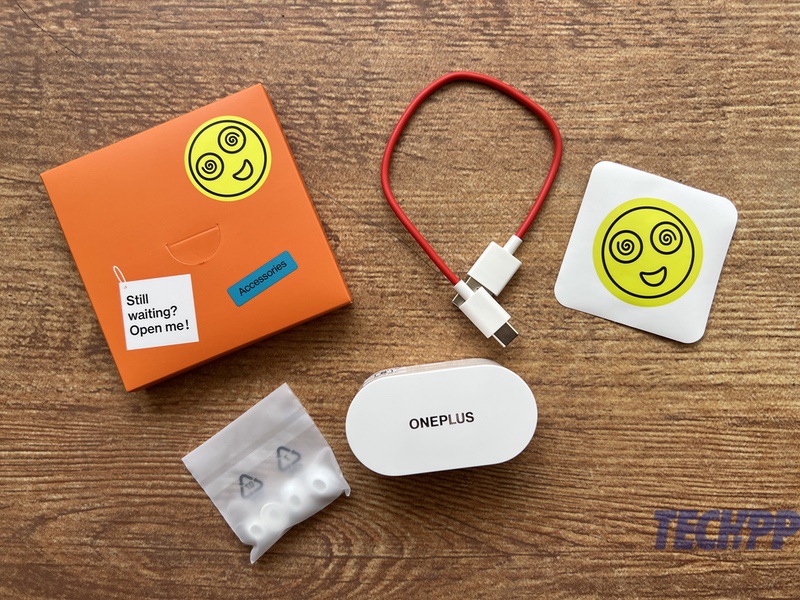 At Rs 2,799, the OnePlus Nord Buds are a very good deal for anyone wanting a pair of TWS that sound pleasant. They, however, will face heat from the likes of the Oppo Enco Air 2, which are available for Rs 3499 and come with ANC. Also in contention are the Realme Buds Air 2, which also offer ANC and are available at Rs 3299, and the Jabra Elite 2, which are available at Rs 2,999 now from some retailers and offer very good performance, albeit minus ANC. The Nord brand has a promising debut in hearables, but it has its hands full with some very tough competition.

Review Overview
Was this article helpful?
YesNo
TechPP is supported by our audience. We may earn affiliate commissions from buying links on this site.
Read Next
iQOO 11 5G Review: Does It End Your Quest for the Ultimate Smartphone?
#oneplus #OnePlus Nord #OnePlus Nord Buds #review