Wi-Fi 6 went official in 2019 as an update over Wi-Fi 802.11ac (or Wi-Fi 5). And within a span of a few months, it started appearing across various devices. While the standard is yet to settle in as the conventional Wi-Fi and replace its older versions, we already have an update — one that has come after almost two decades — and possesses the ability to change Wi-Fi for good. We are talking about Wi-Fi 6E, the latest update announced by the Wi-Fi Alliance in January, earlier this year, which, essentially, promises faster speeds and significantly lower latency rates. Moreover, as of April 23, the FCC (Federal Communications Commission sanctioned unlicensed use of 6 GHz radio frequency spectrum in the US, paving the way for the new standard to come into the mainstream. To help understand the new standard better, here’s a quick explainer on Wi-Fi 6E along with answers to some of the most prominent questions. 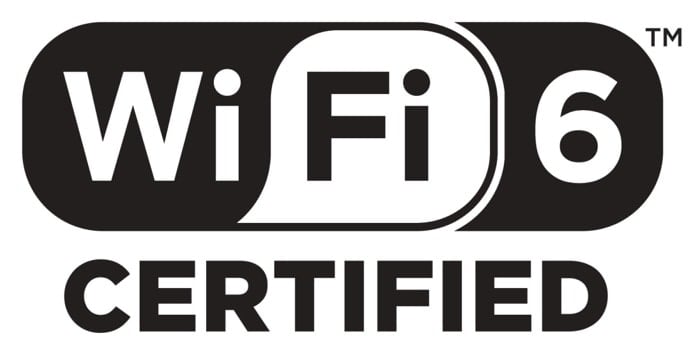 To give you a primer, Wi-Fi Alliance — an organization that promotes and certifies Wi-Fi technologies — announced Wi-Fi 6, early last year. While the announcement was big news in itself [taking into consideration the advantages that the new standard holds over its predecessors], what came as a welcome surprise was the change in nomenclature. As, until Wi-Fi 6, the naming convention involved the use of alphanumeric characters, like 802.11a/b/g/n/ac. However, with the next version, which could have been called 802.11ax, the alliance decided to avoid confusion moving forwards and make the naming scheme easier to comprehend for the average user. And therefore, Wi-Fi 6.

Wi-Fi 6E, in a nutshell, is an update to the Wi-Fi 6 standard and an industry name for users to determine the devices supporting the 6 GHz frequency band. Being an update, it retains the same advantages as Wi-Fi 6, such as faster internet speeds, lower latency rates, and reduced congestion, while offering to possess the scope for slightly improved speeds. And must ideally offer at least 9.6 Gbps of speed, with higher speeds expected due to the bandwidth advantages it holds over Wi-Fi 6.

Talking about the underlying technologies behind the standard, Wi-Fi 6E relies on MU-MIMO (Multi-User Multiple Input, Multiple Output) and OFDMA (Orthogonal Frequency Division Multiple Access, similar to Wi-Fi 6, which allows it to server more devices while offering faster speeds and much lower latency. Moving forward, it also shares the same security standards as Wi-Fi 6, along with support for WPA3 (Wi-Fi Protected Access 3), which uses 128-bit encryption in WPA3-Personal and 192-bit encryption in WPA3-Enterprise mode. Moreover, it also replaces the PSK (Pre-Shared Key) with a more secure initial key exchange. 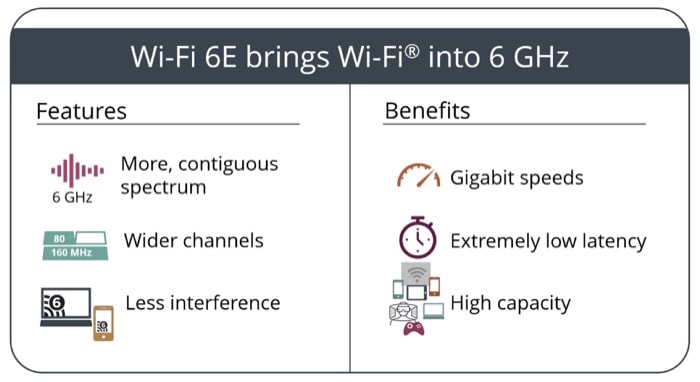 At large, Wi-Fi 6E is kin to Wi-Fi 6, meaning, the standard relies on the same principles as Wi-Fi 6 and promises to offer faster internet speeds with significantly lower latency rates. Although, the major difference that separates the two standards is the range of radio frequency spectrum they leverage for connection. As, much like its older versions, Wi-Fi 6 relies on the same 2.4 GHz and 5 GHz frequency bands, which date back to the early days of Wi-Fi. Whereas, its latest update, Wi-Fi 6E, uses waves in the 6 GHz frequency spectrum to broadcast signals. However, that is not to say that the standard only supports the 6 GHz band and gives up on 2.4 GHz and 5 GHz band, since the introduction of the 6 GHz radio frequency spectrum is more like an addition to the existing supported frequency bands to leverage an even larger bandwidth.

Why is Wi-Fi 6E one of the most significant updates to Wi-Fi, and what it brings to the table?

The incorporation of the all-new 6 GHz band in Wi-Fi 6E marks the most significant major update to Wi-Fi since 1989. And probably, also the most impactful, for the future. Primarily because, until now, while the lower-frequency (2.4 GHz) band travels farther without degrading signals, it offers way lesser bandwidth, which, as per today’s requirements, fails to meet the demands of most users. And the 5 GHz band, which offers a relatively larger bandwidth to suffice to the demands of the present-day requirements, is also likely to reach its limit and crumble very soon, arising the need for an even larger bandwidth. 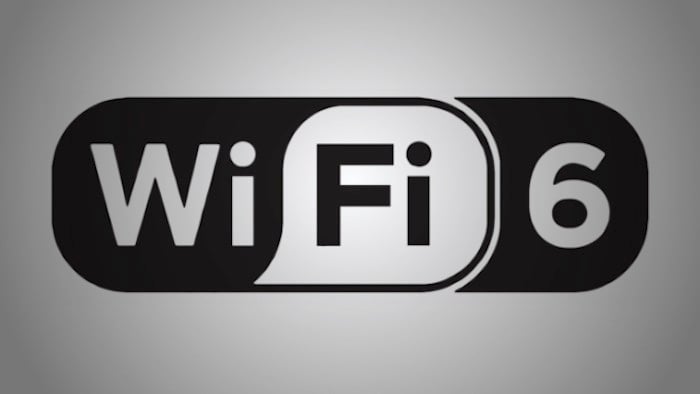 With Wi-Fi 6E coming into the picture, you can forget about the congestions that arise on the current spectrum offerings (both 2.4 GHz and 5 GHz) and expect a stable connection with seamless speeds and much lower latency. Not to mention, a reasonably larger bandwidth (with almost a quadruple of space) that offers better performance with ever-increasing IoT and smart devices in homes and ensures there is almost no interference and network congestion in the years to come.

To give you an idea of the increase in bandwidth, the 2.4GHz band that most of us have been using all these years, comes with a bandwidth that maxes out at 40 MHz per channel whereas the relatively less crowded 5 GHz band tops at 80 MHz. Although this bandwidth was sufficient to suffice the needs for most users back in the day, recent advancements in the field of technology have also increased people’s dependability on internet-connected devices for various devices. As a result, we are starting to notice bottleneck in these frequency bands, giving rise to problems, like interference, unstable connection, and slow internet speeds. However, with Wi-Fi 6E, the substantial increase in bandwidth suggests that we can now expect stable connections with better internet speeds and considerably less interference. As of now, the US has authorized 1200 MHz of the 6 GHz spectrum band for unlicensed use with Wi-Fi 6E.

For a better context, with more bandwidth available to work with, “Wi-Fi 6E can utilize up to 14 additional 80 MHz channels or 7 additional super-wide 160 MHz channels in 6 GHz“, as per the Wi-Fi Alliance. So now, you can expect better high-definition video streaming and improved VR experience with considerably reduced latency, along with the rise of new use cases.

Do you need new hardware to use Wi-Fi 6E?

The short answer is, yes, you will require new hardware to be able to use Wi-Fi 6E. As already mentioned, Wi-Fi 6E adds support for a new, 6 GHz frequency band, which is something that the previous Wi-Fi generations, including the current standard, Wi-Fi 6, did not support. So, to be able to leverage the potential of the standard, it is required to get the latest set of networking tools. Not to mention, the need for devices (smartphones, computers, and televisions) to support the standard, which might extend the timeline — before you can use Wi-Fi 6E — even further. Needless to say, when the hardware and supported devices do come out, they would be backward compatible, meaning you can use them to work with your non-6 GHz network if you want. 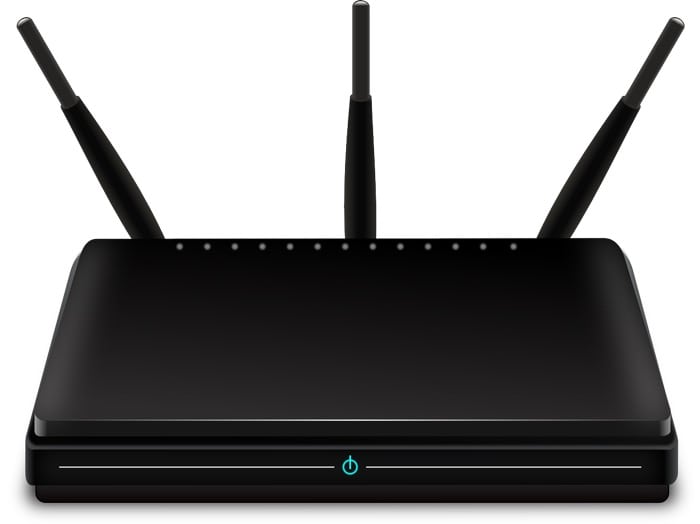 As per Senior Vice President of Marketing for Wi-Fi Alliance, Kevin Robinson, the first wave of Wi-Fi 6E devices is expected to hit the market towards the end of 2020, with deployment kicking off later in early 2021 as soon as the Wi-Fi Alliance starts offering certification programs for Wi-Fi 6E devices. From what it seems, a lot of chip manufacturers, including the likes of Broadcom, Intel, and Qualcomm, have already started working on using the new standard on their upcoming devices.

Do you really need Wi-Fi 6E?

Well, the answer to that is not that straightforward. As you see, with the current scenario — where you have your primary (or essential) devices along with a few IoT or smart devices connected to your network with not many bandwidth-hogging services working in the background — you can pretty much suffice these needs with even the older Wi-Fi standards without running into any problems as such. However, that is not to discourage you from upgrading to the new standard. As, if time is any indication, you will have to eventually move to the newer version to deal with the ever-increasing number of devices in your home, and address the need for more bandwidth, with a stable and fast internet connection. But, if you already have some high-bandwidth demanding requirements, you can upgrade to Wi-Fi 6 as of now, and still be future proof for at least a good few years.

When can other countries expect to get Wi-iFi 6E?

Even though the Wi-Fi Alliance introduced Wi-Fi 6E at the beginning of this year, it took the US some time to sanction unlicensed use of the 6 GHz frequency band for Wi-Fi 6E. So, for the standard to make its way into the mainstream, it is necessary for every country to make the band available for unlicensed use, which, in itself is a challenging regulatory task, and could take a considerable amount of time, before becoming the new standard across the globe.

What is the Difference Between SFC, CHKDSK, and DISM in Windows 10?
Read Next

Ultra Wideband (UWB) and its significance [Explained]
The Redmi Note 11 series arrives in India... but has it put…
Ecosystem expansion and going back to roots - the OnePlus…
Seven Years, and STILL Going Strong: What Makes the ATH-M50x…
WWDC 2020: Is the phone finally going to be THE computer?
Google Pixel 4a is Going on Sale in India Starting October…